1.     People whose nationalities living in your area?

2.     Did you know that Ukrainian ethnic groups living in your community?

HISTORY OF UKRAINIAN NATION. Ukrainian as a native population of our country is very old people. Archeological finds at with. Korolevo Transcarpathian region evidenceshow that certain territory of Ukraine were already settled more than 600 thousand years ago. Since the transition to a sedentary lifestyle indigenous populationing never left his native land.

Ukrainian ancestors are Trypillians that inhabited the territory between the rivers Dniester, Southern Bug and Dnieper 3,5 - 2 thousand years BC. e, and early Slavs who lived in these territories and in Precarpathians later. Slavic tribes (Dulebs, clearing, Drevliany, Northerners, youvertsi, Ukichi) engaged in agriculture, were sedentary. They and formed the basis of the Ukrainian people. Notwithstanding incessant raids by nomads and the adoption of rice crops of some other nations, Ukrainian kept their national identity. It is found in their language, behavior, material and spiritual culture.

According to Ukrainian language relating to Indo-European language family, Slovakiav'yanskoyi group (East-sub) nations. Today it is one of great nations of the world, that densely distributed in central Europe and disseminated worldwide. 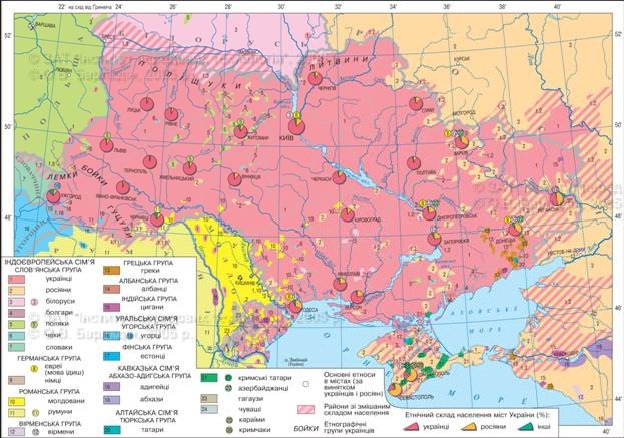 According to the latest census (2001 City) in Ukraine residing at 134families (ethnicities). But Ukraine is odnonatsionalnoyu state with a multi-ethnic composition of the population. It State of the Ukrainian nation, because in the world no other country in whatever interests Ukrainian satisfied floorbut and comprehensively. The indigenous population of Ukraine - Ukrainian. Their share in national structure is 77.8% (more than 37,5 million people). Ukrainian form the majority in all regions except Crimea. The highest proportion in the population is Ukrainian Ternopil, Ivano-Frankivsk,tion and Volyn region (Over 97%) lowest - in Crimea (25%) Lugansk, Donetsk, Odessa areas (Over 52%).

Historical conditions contributed to the development of Ukraine formation multiethnic composition of itspopulation for the full benefits of the Ukrainian people. The largest national minority in Ukraine Russians. In XIX – XX Art. their number and proportion of the population steadily increased, which was a result of migration policy in Russia and former USSR. However, after Ukraine's independence the share of Russians decreasing open porosity decreased from 22 to 17%. Such abrupt changes in performance is obviously the result not only to Russians traveling abroad, but also growth of the national identity of persons of Ukrainian origin, who during the previous census recorded as representatives of another nation. The highest proportion of Russians in the population Crimea (58 %), Donetsk and Luhansk regions (Over 38%).

All other minorities together make up only 5% of the population of Ukraine. Belarusians is the third largest ethnic group in Ukraine. Their share is 0,6% of the total population of the country. The main part Belarusians living in Donetsk, Lugansk and Kharkiv areas. Belarusians settled in these regions during the period of active industrial development, If I created new jobs and housing was conducted briskly. Majority MoldovansWhich is 0,5% of Ukraine's population live in neighboring regions of Moldova - Odessa, Vinnitsa and Chernivtsi.

After the decision on repatriation of deportees in 1944 р. by the Stalinist regime Crimean Tatars, their number is steadily growing in Ukraine. In the population of Ukraine and their share reached 0,5% (in the Crimea - 12%).

Bulgarians constitute 0.4% of the population Ukraine. They live mainly in southern regions of our country - Odessa, Nicholas and Kherson. Romania (0,3% in population) as Moldovans are concentrated in the neighboring regions of Romania - Odessa and ChernivtsiAnd Hungarians (Just 0,3%) - On the border with Hungary. In places of compact residence of the Hungarians in the south Transcarpathian region, There are Hungarian schools, Hungarian newspapers published. Portion Polesin the population of Ukraine is 0.3 %. Since joining in 1939 was western regions of Ukraine to the considerable part of them moved to their ethnic home. Today, most Poles living in Zhytomyr and Brussels areas. Representatives these eth-virgins, who has long lived in their ethnic territories, result state separation were part of Ukraine,

Significantly decreased in recent decade in the population of Ukraine, the share Jews (0,2%), which due to their migration abroad. Now they are concentrated mostly in cities (the largest - in Odessa, Kiev). Living in Ukraine and Greeks (0,2 %). Greek settlement appeared in the Azov Sea in the second half of XVIII. It was founded by the Greeks Mariupol city and towns around it. The bulk of the Greeks live in Donetsk region and Crimea. In addition to the nations is Slovaks, Czechs, Gagauzia, Gypsies et al.

The most diverse national composition of the population - in the industrial regions and large cities that there due to migration of people from different nationalities to work and study, and also in the Crimea and some border areas.

All people in Ukraine have equal rights and opportunities to develop culture and education in the mother language. Together with Ukrainian and they build an independent democratic state free of which they are. 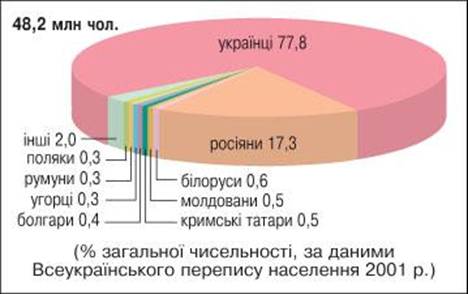 Ethnographic UKRAINIAN GROUP. Ukrainian in various parts of Ukraine have some features that you-are in language, dress, housing, customs, rituals, decorative and applied arts. Based on this distinguished ethnographic game-pi Ukrainian. Previously there were many such groups (Sevryuk, Podilians, Litvin, Pinchuks, Cherkasy, Polishchuks, Jaunty, hutsu-ly, Lemkies). As the specific features of the ethnographic groups gradually smoothed out, some of them no longer exist. The Beststill retained their ethnographic tradition and dialect group of Ukrainian highlanderskyh Carpathians - Boyko, hutsuly and Lemkies.

UKRAINIAN DIASPORA. In Ukraine live onover 3 / 4 of all the Ukrainian people. Total in the world to over 50 million people. Those that outside Ukraine, form Diaspora (Derived from the Greek word meaning "Scattering"). Ukrainian diaspora largest in the former USSR republics - Russia (5 million people) Kazakhstan - 0,9 million Moldova- 0,6 million, and in U.S. – 1.2 million, Canada - 1,0 million people. Many Ukrainian and living in other countries. Many of them Ukrainian preserved their language, culture, national identity. 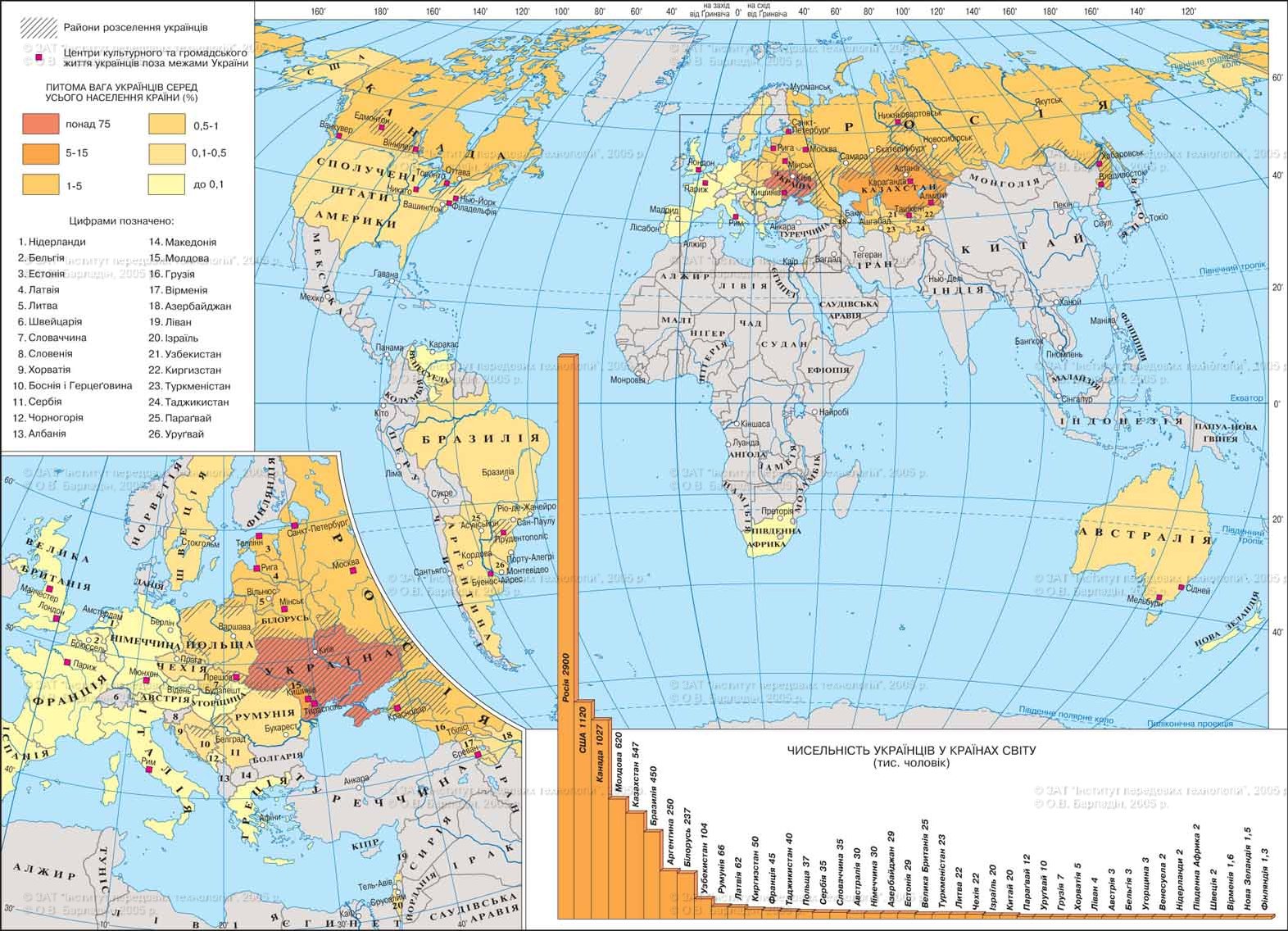 Fig. Ukrainian settling in the world

The most intense of Ukrainian migration to Canada lived at the end of XIX - XX centuries. They were mostly natives of Galicia and Bukovina. Most of them settled in southern Prairie Provinces of Ontario, Alberta and Manitoba. In Canada, created the proper conditions for national-cultural development of the Ukrainian people. There are nearly 300 Ukrainian schools Ukrainian newspapers published in 1985.

Ukrainian include to Indo-European language family, Slovakiav'yanskoyi group of people.

Ukraine is odnonatsionalnoyu state with a multi-ethnic composition of the population - Ukrainian but that is 77,8 % Living in the country Russians, Belarusians, Moldovans, Crimean Tatars and Karaites, Bulgarians, Romanians, Hungarians, Poles, Jews, Greeks and others.

1. Tell us what you know the formation of the Ukrainian nation.

2. Describe national the population of Ukraine. What causes led to changes in ethnic composition Ukraine's population?

3. Using different sources of information, learn about the culture of some Ukrainian ethnographic groups.

4. What is diaspora? In which countries is the largest Ukrainian diaspora?

2.     Write to the conclusion features of the national population of Ukraine.