If traveling by land from the North Pole to the South, we can observe that large areas of the earth surface with the same nature are changing each other. Such plots are called natural zones.

In the natural area is like weather throughout the year, these soils, plants and animals.

In the northern hemisphere from north to south are such natural zones: the Arctic desert, tundra, taiga, mixed forests, forest-steppe, steppe desert.

natural areas in the mountains change from bottom to top.

mixed-forest zone occupies the northern part of Ukraine. its surface is flat. Mixed-forest zone known as the Ukrainian Polissya. There are many areas of natural rivers. This - the land of lakes and swamps. It created a large artificial pond - Kiev reservoir.

zone of mixed forests in the cool spring. Summer is warm and wet. In summer the sun's rays heat the ground well, as the sun rises high in the sky. Autumn rain. Winter snow, not too cold with thaws.

Owing to the large amount of rain the river flowing Polesie. In the spring, when melting snows on them are long flood. Rain and ice water slowly seeps into the soil, and therefore formed marsh. Groundwater outcrop numerous streams. They feed the rivers, lakes, swamps.

early spring blossom in the woods first Snowdrops, snowdrops, ryast, anemone. Later - lily of the valley, violets, bush, sleep-grass. In summer the trees are only voloholyubyvi, tinevytryvali plants - ferns, mosses, coltsfoot. Other herbaceous plants growing on lawns and edges. Among them: St. John's wort, yarrow, valerian, chamomile, willow herb. In the mixed forests of many fungi.

autumn from deciduous trees and shrubs deciduous leaves. Most herbaceous plants die. Fallen leaves and dead plants form the forest floor, which retains moisture in the soil. Perehnyvayuchy Gradually, it becomes a nutrient for plants.

Near forest reservoirs lodge beaver, otter, muskrat. In the forest and live on the fringe of snakes and lizards. With water connected with the life of snakes, frogs, newts. Rivers and lakes are rich in fish.

To maintain and increase the nature of the zone of mixed forests, created Polessky, Rivne and other reserves.

farther south of the zone of mixed forests, the more there bezlesnyh plots - lots of steppe. Territory in which alternating patches of forest and steppe, steppe zone is called.

In the forest steppe zone of warm summers and moderately cold winters. Rainfall is less than in the zone of mixed forests, but more than in the plains. In steppe areas mainly black soil. Natural conditions are favorable for growth and development of many wild and cultivated plants. In this zone there are areas of predominantly hardwood forests. Animals live there, most of which extended into the zone of mixed forests.

South of the forest to the Black and Azov seas stretched Bezlisna Territory - steppe zone of Ukraine. The surface of steppe plain, with hills, ravines and gullies.

In the steppe belt sun is higher in the sky than in the zone of mixed forests. Because the sun's rays fall on the steppe zone straighter and harder heat the Earth's surface.

The steppes summer long, sunny, hot. Rainfall is scarce. Autumn is warm. In the second half of the autumn rains. Winters are short, cold, dry. Spring comes early. Because the temperature sharply rises, the moisture from the soil evaporates quickly.

steppe zone to the seas flowing large rivers in Ukraine. In the Danube Delta are many freshwater lakes and along the Black Sea - the salt lakes, estuaries. On the Dnieper cascade of artificial reservoirs - reservoirs.

The steppe zone is growing herbaceous plants. Trees and shrubs are found on the banks of ponds and ravines. Only there they have enough moisture.

Bright and colorful desert in early spring. When the soil has enough moisture, there rannokvituchi plants: Iris, hyacinths, Crocus, adonis, tulips, peonies, poppies. Before the heat and allow plants vidtsvitayut seeds. their ground part dies. Tubers remain in soil, bulbs, rhizomes, where they can accumulate nutrients. These substances plants grow and blossom next spring.

Rannokvituchi modified plants that are adapted to the heat and lack of moisture.

summer in the desert are of wormwood, typchak, feather grass. Some plants have long roots that will reach the depth of water. Other - strict or narrow pubescent leaves. Through them very little water evaporates.

In mid-summer from the heat begin to dry up all the plants. Wind picks up their ball and rolls in the desert, standing vytrushuyuchy seeds. This time of plain gray and cold.

The steppe zone is poorer fauna than in the forest. Almost all animals have acquired a yellow-gray color, which makes them less visible among the yellowed grass.

Most animals live in burrows. It rodents: marmots, ground squirrel, hamster, mouse, jerboa. A well-developed front teeth are nibbling plants. Dig holes, foxes, polecats, badgers. For animals are hiding hole during an emergency and inclement weather, the birthplace of kids. And for some of them - a place of winter sleep or hibernation, stockpiling forage. In the burrows of small animals settle reptiles, including snake steppe, steppe tortoise, lizard Warbler.

In the plains many insects: butterflies, beetles, locusts, grasshoppers. Feed for these are different parts of plants. Insects, in turn, are food for birds, reptiles and amphibians.

for nature conservation in the steppe zone of established reserves, including: Askania Nova, Lugansk, Ukrainian steppe.

Carpathian Mountains, located in Ukraine, the Ukrainian Carpathians are called.

Ukrainian Carpathians - the mountains, the average height. They are formed by several mountain ranges. Between them lie picturesque valleys.

Carpathian Mountains - a place in Ukraine, where most precipitation falls: rain - in the spring and summer, snow - in winter. Spring snow lies on the long rounded tops of mountains, but eventually melts under the sun. After the rains and snow melt water flow runs from the mountains into the valleys and often causes flooding.

flowing from the mountains many streams and rivers. There are descended from the Dniester, Prut and their major tributaries. In the Carpathians there are small but very deep lake with crystal-clear cold water.

At the foot, on mountain slopes, growing deciduous forest. His form oak, linden, maple, beech. Above - cooler weather, there are pine trees - fir, spruce and European, called the fir-trees. From hardwood dominated by beech. Wood is mixed. Undergrowth and mixed deciduous forests form a raspberry bush, hazel, blackberry, wild rose. At the edges and glades grow herbaceous plants, many of them medicinal. Under the trees a lot of mushrooms: white, brown, pidosychnykiv, Oiler, mushrooms.

on top of Carpathian pine forests vary from shrubs with pine and juniper. Behind them stretched mountain meadows - plains. They are covered with colorful flowering herbaceous plants.

But there are animals that is more common in the Carpathians. Among the animals - brown bear, wild cat, lynx, with birds - black stork, eagle, golden eagle, spruce crossbill, black woodpecker, zmiyeyid. Only in the Carpathian forests occur: protein Carpathian, snow vole, wood grouse Carpathian. Reptiles and amphibians in the mountains many species. This - spotted salamander, newt carpathian, forest snake, lizard, viviparous, and tree-frog frog Warbler. In rapid mountain rivers and trout fish is found. In the forest litter, on trees, bushes and herbaceous plants, live insects and their larvae.

To save the nature of the Carpathians, created reserves: Carpathian and Gorgan.

Crimean mountains bordering the zone of steppes and the Black Sea. Separates them from the sea coast is flat strip of varying width. Sloping down to the desert slopes of mountains and the sea - steep cliffs.

In the mountains there are weird pillars, pyramids, quirky form of rock. Many also caves and deep wells, which does not melt thick ice. All this - the result of sun, wind and water.

Mountain river flowing deep narrow gorges. During the melting of snow and rain are confused. In the heat of small rivers dry up.

In the Crimean mountains, as in the Carpathians, the flora changes from bottom to top. Lowest on the slopes of the mountains lies a forest of oak and juniper furry high. Among these common arbutus, pistachio. In the underbrush grows - juniper prickly, wild rose, daphne, dogwood, ivy. The third tier in the tree form various herbaceous plants. Kvituyut Spring Snowdrops, Crocus, hyacinths. Summer - a deaf nettle, buttercup separated, borschivnyk fluffy, adenofora Crimea, which includes the Red Book.

on flat tops of the Crimean mountains stretched mountain meadows - jajly. In jajlah no shade, little water. Because of the rain and melt water runs quickly on the slopes, and a part - steamy. In jajlah growing herbaceous plants that are adapted to arid conditions. This - feather grass, typchak, sage, chaff, awnless, sedge, thyme, sainfoin.

Crimean mountains are found in animals of different groups, because all the necessary conditions for their life.

in the mountain forests are home to many birds. Among them: Crimean jay, woodpecker variegated, black tit, crossbill spruce. The mountain nesting birds: a rash of white, black vulture, White-tailed.

reptiles and amphibians, there are many types, but most of them - are rare. This - leopard snake, lizard rock, Crimean gecko, green toad, marsh turtle.

for Conservation of the Crimean Mountains Crimean created and Yalta reserves.

area as the Crimean mountains distinguish the southern coast of Crimea-wide strip of land from 1 to 12 km between the Crimean Mountains and the Black Sea.

sun almost sheer drop on the southern coast of Crimea. They bring a lot of light and heat. For example, in Yalta a year is about 210 sunny days.

Spring starts early. Summer is almost bezdoschove, long and hot. Rainfall in autumn and winter. Winter is very warm, so once the snow melts.

the weather also affect the Crimean Mountains and the Black Sea. Mountains in all seasons to protect the southern coast of Crimea from the cold north winds. In summer the sea is cooler than land. His coolness reduces summer heat. Over the summer the water in the sea well heated. In winter, it gradually gives heat, warming the air over the coast.

natural conditions the southern coast promoting plant growth and development. Here there are thickets of juniper tree, oak furry, turpentine trees. Grow plants that do not shed the winter leaves. So they adapted to the dry summer and warm winter. This - arbutus, ruskus, Ivy Tree.

admired the beauty of evergreens. Among them: slender cypress, luxurious palm trees, magnolia with large fragrant flowers, a powerful Lebanese cedar and laurel. These plants are growing in parks, beautify the city and village. them in this land of long ago brought from many corners of the Earth.

diverse fauna of the Southern coast of Crimea. Home to many insects: butterflies, beetles, grasshoppers, dragonflies, bumblebees. Among them are rare: butterfly-Soto dead head, bugs - ground beetle Crimean barbel and Alpine. They are listed in the Red Book of Ukraine. Insects are food for amphibians, reptiles, birds, animals - bats.

Every spring in the woods and parks of flying birds: Korolko, Flycatchers, nightingales, thrushes. At the bank settle gulls, cormorants and ducks that eat fish.

In these places inhabited with frogs, lizards, limbless lizard in particular - zhovtopuzyk, snakes.

for preservation and conservation of the Southern coast of Crimea established reserves: Karadag and Cape Martjan.

sun heats the Earth's surface. From her hot air. Warm air is easy. It goes up, which gradually cooled. The higher up the climb, the colder. It can be felt in the mountains. Summer at the foot of the valleys and hot, and the high peaks of the snow and ice.

POPULATION OF UKRAINE. EARTH AND REGION 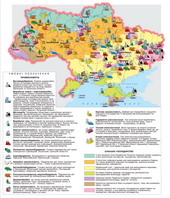 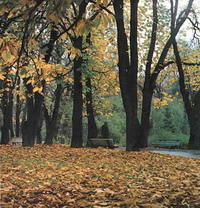 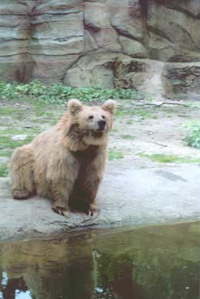