Canada, which was the Englishdominion, actively participated in the Second World War on the sideanti-Hitler coalition. It was a real arsenal of England. It was producedOver 800 thousand military trucks, 50 thousand tanks, 18 thousandaircraft, 4 thousand ships. Its troops have participated in combat operationsalmost all fronts of the war. The war gave impetus to economic growthCanada: the pace of development it came out on top among Western countries.Canada has become an industrial state. Economic growth, started inDuring the war, continued in the postwar years. The impetus for this was rapidpopulation growth (mainly by immigrants) and, accordingly,increase in the domestic market, developing the north and far west.

In 1949, of the Canadianentered New Faundlend and rich in iron ore north-eastern partLabrador. Established large oil fields in Alberta and Saskatchewan.

Strengthening economic and politicalCanada's position weakened the traditional ties with Britain. Importantstep to eliminate remnants of colonial dependence was the adoption in1947 Law on Canadian citizenship and Canadian recognitionSupreme Court's highest appellation country. In 1952,Governor of Canada became the first Canadian in origin V. Messi.

«Prime ministersCanada in the postwar period»

In the internal political life continuedtraditional rivalry between the leading political parties - the Liberal andconservative. From 1935 to 1957 in power were always liberalspolicies which promote the economic prosperity of the country (until 1948, the governmentMackenzie King led, and by 1957 Louis Saint Laurent), and contributestrategic relations with the United States.

Conservatives, seeking to come togovernment resorted to serious reform within the party. Since 1956 partywas called Progressive conservative. Party led by an energetic politicianJohn Dyfenbeyker who initiated the change of party program. Newelection program provided for solution of many economic and politicalissues: the development of the North, the restoration of traditional ties with Britain andBritish Commonwealth, "kanadyzatsiya" economy and culture, the eliminationunemployment, improving the relationship between the federal government and provinces.With the renewal program, the Conservatives in 1957 won the elections andformed a government. The new government has increased the size of the disabled and elderlyage, reduced taxes, provided loans to farmers during the upcoming harvest, had othersocial reforms. In August 1960 was adopted by the "Bill of Rightscitizens. But do most campaign promises failed.Specifically failed Northern development program, "kanadyzatsiyi"elimination of unemployment. The positions of the ruling party began to weaken.

In foreign policy, governmentDyfenbeykera rate continued to strengthen solidarity within the AtlanticNATO (Canada since 1949 a member of this organization). In certain cases itrepresentatives had a different opinion from the U.S. position. Yes, Canada has refused tojoin the Organization of American States (OAS) is not broken diplomatic andtrade relations with Cuba, supported the demand of recognition of the PRC. Early60 years in Canadian society broke sharp debate onplacement of American nuclear weapons in the country and the presence of Canadian troopsin Europe. Prime Minister Dyfenbeyker spoke strongly against, but mostfavor of his office "for". This provoked a government crisis,consequence of which was dissolving parliament and calling new elections. In politicalSuppression got involved two new political parties - New Democratic Party andsocial credit. Although elections 1963 Liberals won, who scored 42%votes, it appeared that two-party system has collapsed, as conservativesscored 32% of votes, and new party 25%.

The new government formed Lester Pearson,who was in power until 1968 Lacking a majority in parliamentLiberals were forced to carry out careful policy, avoiding the sharp politicalangles. Among the most visible actions of a liberal government is the adoption in 1965the new Canadian flag with a red maple leaf on a white field andAvtopaktu conclusion, so united auto industry in Canada andUSA.

3.Problema Quebec. Development Canada in the 70's and 80's.Constitutional Reform 1982

Following our careful policyLiberals could not avoid the most acute problems of Canada - National.It was caused by dissatisfaction with his French-speaking population of Canadaeconomic status, social and political status. The roots of thisthe problem lies in the formation of the Canadian state and its peculiaritiesnational structure. The population of Canada is divided into Anglo-Canadians - 40%French-Canadians - 27% who are descendants of the first settlers from England andFrance, and immigrants from other countries in Europe, Asia and Africa.

Most French-speaking populationCanadians living in Quebec, where they represent 82% of the population. SoFrench-Canadian problem is primarily a "Quebec problem". Leading positionseconomic life of the province belong to the Anglo-Canadian and Americancompanies. Thus, Anglo-Canadians who are here 10% of the populationoccupy 80% of all managerial positions in industry, while the workers theirshare is 7%. Income Anglo-Canadians exceeding the average level of incomein the province by 40%. At the same time in Quebec had the highest unemployment rate incountry. An important factor was the incentive for separatism French-Canadianswas the dominance of English: English possession gave the advantageemployment and improving social status at the time, as ignoranceFrench is pulled by a decrease in social status. DominationEnglish was the reason that new immigrants preferredEnglish and thereby increased the proportion of Anglo-Canadians in the province.These reasons have led to mass movement of French-speaking populationequality. The reluctance of governments to solve this problem led to the emergence of movementamong French-Canadians for the exit from the Province of Canada and the formationindependent state. In 1968, Quebec formed party led by ReneLevekom. Liberals, given the seriousness of the problem, went to the changes inparty leadership (the leader of a French-Canadian Pierre Elliot Trudeau) anddeveloped a program of reforms within the country.

Having achieved victory in the elections1969, the Trudeau government through parliament held a law which proclaimed thatequality of English and French in all branches of the state apparatusand involved the introduction of bilingualism in areas where minority who speak the sameof the two official languages, is not less than 10% of the population.

Since 1971 began executionGovernment programs - learning a second language in secondary and tertiaryinstitutions. These events changed the situation somewhat for the better, but not radical changeshappened. First French-Canadians protest led government concept"One country - one nation." Political expression of this protestbecame law number 22 (1974) Quebec parliament, whichdeclared French the sole official language of the province. The situation sharpenedAfter coming in 1976 power in the province of Quebec party, whichannounced a phased withdrawal plan from the Quebec federation. In 1980,Quebec Party organized a referendum to bring about the declarationQuebec independence, but this idea was supported by only 40% of voters. Mottoindependence was temporarily removed, but the problem has become chronic.

The problem was only a manifestation of Quebecgeneral crisis of the Canadian federation. Much of the provinces demandedRestricting the central government. In addition, there was no clearly delineatedfunctions of federal and provincial governments. The situation is complicated bythat the federal government had no constitutional limit opportunities CentrifugalProvincial trends as the role of the Canadian constitution adopted servedBritish Parliament in 1867 Act British North America,amendments which have been approved by ParliamentUK. This anachronism has forced the government to address Trudeau 1980 toLondon with the request of Canada's full sovereignty in the constitutionalarea. In March 1982 British parliament passed a law lastthe case of Canada - Canada Act, which suspended the legislativeUK office of this Dominion. April 17, 1982Canadian Parliament passed a Constitution Act. Thus, the existence of 115Canada got rid of the colonial past. Constitution Act greatly expanded theprovincial powers, but not solved the problem status of Quebec, they keepthe possibility of deepening crisis of the federation.

In the early 80's in Canadaexacerbated the economic situation, which for a while pushing back the problemfederally-provincial relations. A decline in production. State deficitamounted to 24 billion Canadian dollars. 12% of the working population found themselves insituation of the unemployed.

Economic difficulties have led toLiberals defeat and came to power in 1984 Progressive ConservativeParty led by Brian Mulroney. He made a series of reforms in the spirit"Conservative Revolution" and brought the country out of economic crisis. Onethe main policy objectives Conservative government thought achievementnational consensus and preserving the unity of the state. Again was the most difficult"Quebec problem", which refused to accede to the constitution in 1982 andrequired to provide him special status. After lengthy negotiations, thedraft constitutional treaty, which defines the special statusQuebec. But this time some English-speaking province refused to ratifycontract. The problem again reached a deadlock that has raised a new wave of separatism.Its peak was a referendum in November 1995 the independence of Quebec.The separatists once again suffered defeat: voted for independence 44%against - 46%.

Since 1993 in power in the countryLiberals are led by Jean Chretien (in 2000 he was elected the third timePrime Minister) who are trying to solve the national problem.

During the period in officeLiberals have made a series of reforms and transformations. Yes, it was recreationfinancial system of the country. Since 1998 fiscal year endswith a surplus. Additional funds allocated to various programs andrepayment of debt. Socioeconomic Chretien government program included twoProgram: "Strategy for Equal Opportunities" (the development of education and science) and "CreatingSafe Society "(expansion of social programs). An important step of the governmentTax reform has become: a gradual reduction of taxes and business incentivesactivity. These early beginning to show tangible results in 1997 beganreduce unemployment. The growth of business activity. In the period ofLiberals accounted completion period of economic restructuring in Canadaknowledge-intensive industry by reducing the raw areas (forest,mining, agriculture, etc.). Deepened integration process with the U.S. -creation in 1994 FTA NAFTA (USA, Canada, Mexico).The integration process has achieved extraordinary results: 40% of GDP in Canada is exported, withwhich 80% of the U.S.. Turnover of the Canada-US trade is greatest in the world - 1billion. per day. Advances in Canadian economic development impressive: at presentday in terms of economic development it takes seventh place, the level of life -first in the world. 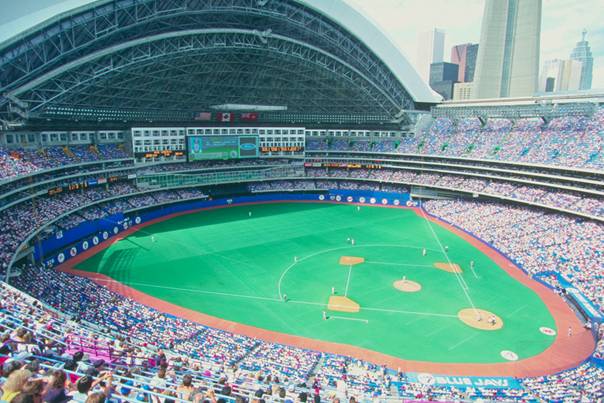 In December 2003, Canadaa change management: the new Liberal leader and prime minister wasPaul Martin. Significant changes are noticeable in the opposition camp. As a result of associationCanadian Alliance and PCP in 2004 renewed Conservative Party, whichintends to challenge the Liberals in the next election.

Long time, foreignCanadian rate was in the shadow of the U.S. and UK.

In the 80 years Canada has stepped up its ownforeign policy. She acted with the intent to act as mediatorin relations between the U.S. and the USSR and the USA with the third world. Especiallyactive mediation was deployed in the settlement of regionalconflicts. In 1986, Canada strongly advocated for the termination of civilWar in Nicaragua, condemned the intervention in its other states, including the United States.In 1989 it has provided practical help in holding generalparliamentary elections in this country. The positive role played in the Mulroney governmentElimination of apartheid in South Africa. Canada contributedsettlement of the conflict in Cambodia. Canadian military contingents participating inUnited Nations peacekeeping activities in many hot spots around the globe.

After the collapse of the Soviet Union welcomed Canadaformation of new independent states and supported entry into the UN. One offirst - December 2, 1991 it recognized the independence of Ukraine andestablished diplomatic relations. In January 1999 Prime MinisterCanada Jean Chretien to visit Ukraine. The visit culminated in the signing of sevenbilateral agreements and memorandums.

In the postwar years, Canada has gonefrom dominion to the British sovereign state, which for its citizensprovide a decent standard of living. Coming to a club of seven most developedcountries  Canada every yearplays an important role in the world.

However, no countrymanaged to avoid serious internal problems. The main of which is a national(The problem of Quebec). However, thanks to energetic acting governments most of the problemsmanaged to remove.

1.    Describe the main results of Canada50 and 60 years of the twentieth Art.