§ 21. The Industrial Revolution in England (textbook)

§ 21. The Industrial Revolution in England

2.How technical Inventions of the two preceding centuries?

End XVIII Art. England began Industrial Revolution (Industrial coup), that the transition from manufactury production to factory, from manual labor to machine. Prerequisites her ripened long ago. The first was Agrarian Revolution (agrarian revolution), which began in the XVI century. Agrarian Revolution - A transition from natural to commodity production in agriculture, the elimination of small concentration of farms and land in the hands of large landowners, major tenants, the introduction of wage labor.

In England, the agrarian Revolution assumed the form of fencing, when the landlord took public land to increase their holdings to sheep breeding and this impoverished peasants. Recently, destitute, turned on the cheap hired labor. The most active process took place in rozselyanyuvannya XVIII century. When parliament passed almost 1,5 thousand laws that allow fencing. At the end of XVIII century. peasantry in England disappeared.

The second necessary precondition for industrial revolution was the change in technique. Manufactury production, which was based on manual labor and simple division into separate operations, inspired workers and craftsmen of the idea that the human hand can be replaced by some device, machine.

The most important invention, which became the impetus for the industrial revolution, was to improve loom. John KayThat Weaver worked, and later a mechanic, invented in 1733 weaver's shuttle. It made it possible to produce tissue broader size has doubled productivity work, ie work of two weavers began to perform one.

With acceleration production of fabrics having a problem of lack of yarn. Spinning process needed improvement; technological breakthrough made a weaver and carpenter James Harhrivs. Established it distaff "Jenny" was the mechanism that provided simultaneous extraction and twisting yarn. Labour productivity has grown spinners in 18-20 times. In 1784 Edmund Cartwrightessentially invented a new loom that increased productivity 40 times.

Invention working mechanism, ie that the machine that processes the raw materials directly, replacing the hand of man, was the beginning of the Industrial Revolution in England.

However, all these devices uruhomlyuvala beef man that impeded further growth productivity. In 1771 entrepreneur Richard Arkwright founded the company, which moved spinner using a water wheel. It was no manufactory, and the first in history factory - an industrial plant where system performs the basic operation of machines. The factory was Arkwright have several thousand machines and 300 workers were working. 20 years similar factories in England, there were 150. Nevertheless, the plant could displace factory because they were tied to convenient places in the rivers. It took universal motor. This engine was the steam engine, created James Uattom. The engine by more than century became the main engine.

Building Steam machines and machine tools led to the emergence of engineering industry. Engineering caused an increase in demand for the metal, which, in turn, gave strong boost to the industry. During the XVIII century. resolve the issue mass production of iron and then iron based coal. This coal mining was one of the main branches economy.

Invention of steam enabled machines and improving transport. The engine was put on wheels and after unsuccessful attempts launched to move stones on the iron rail road. The first successful parotyah, move at speeds of 10 km per hour and had eight cars, made in 1814 self-taught engineer George Stephenson. The massive railway construction began in 20-ies Nineteenth century. American engineer Robert Fulton established a steam machine on board, with both boat appeared. 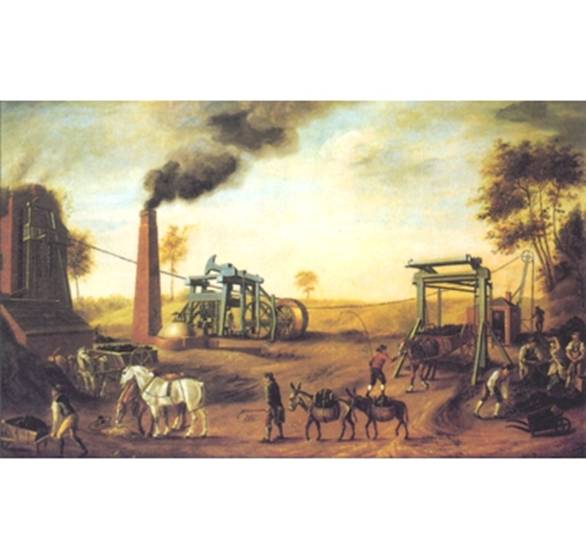 Fig. The use of steam engines in the industry

The development of machine building, metallurgy, mining, transport became the basis for industrialization and of industrial society.

2. Effects of the Industrial Revolution

As the Revolution formed a new political structure of England. Industrial Revolution, in turn, contributed to the formation of the new economy and society structure. The economy was the central role played by prime manufacturing industry. Sale vyhotovlyalasya to factories, thanks use of the car was cheap, it caused a gradual displacement of the market artisans and products manufactories. Changed for the English character and trade: to the country imported more and more necessary raw materials and exported outside the UK cheap factory-made goods.

Huge changes have occurred in the social structure of society. As the Industrial Revolution old social strata (feudal lords and peasants) gave way to businesses and employees.

Number Business has steadily increased and exceeded the number of older landowners. New entrepreneurs, or bourgeoisie, personified the new industrial England. They owned factories and plants, know the markets and skillfully adapted to changing consumer demand. For the majority of major business became a measure of the success of benefit. Without this, of course, no production could develop. Only if they could profit develop their production. So with the emergence in society of entrepreneurs and employees workers, the struggle caused by conflict of interest: or interests entrepreneur development and production, or the interests of employees and increase in payment of its work, social guarantees. First the workers were against machines, because they thought was guilty of deteriorating working conditions, reduction of employees and wages. "Fighters with machine" called Luddite.

Between industrial revolution of the main sectors of British society became Employers and employees, testified to the formation industrial society in England.There are other traditional groups, but they have not played a decisive role in society and gradually disappeared.

One of its founders was the Scotsman Adam Smith, who advocated need for the development of market relations. In his keynote Labour Research nature and reasons of wealth of nations "Mr. Smith wrote that human society - A first union, which is based on the exchange of different kinds of work. The propensity to exchange he considered the main characteristic of human nature, which simultaneously promotes the welfare of society. Manage this process market - the "invisible mechanism, which is organizing economic activity. For normal functioning of the market should be "natural freedom" because the state does not should intervene in economic life, and serve as "Night guard". For the development of market relations, respectively - the economy, need free trade and freedom of entrepreneurship. Capitalism, on According to A. Smith is the only procedure that corresponds to human nature and term needs to ensure overall well-being and prosperity.

1. From the books by A. Smith "Wealth peoples "

"Actually ... person does not intend to serve the common good ... If a person puts capital in the national industry, it does not with patriotism ... But everywhere caring about their own winning it in such a case, as in many others, directed the action of invisible hands to achieve a goal that none of his not avoided.

2. What properties entrepreneurs stresses A. Smith?

3. What in their actions guided by the entrepreneur?

1.What is Industrial Revolution?

2.Name main differences between the factory and factory.

3.What changes occurred in agricultural production?

4.What technical inventions helped to make the industrial revolution?

5.Find social consequences of the agrarian and industrial revolutions.

6.What caused the emergence of political economy?

70-80's XVIII. - beginning of the Industrial Revolution in England