§ 3. The overthrow of the monarchy and the establishment of the republic in France (textbook)

§ 3. The overthrow of the monarchy and the establishment of the republic in France

1. The politicization of French society

During autumn 1791 - summer 1792 in France deterioratedeconomic situation. Increased bread prices, inflation was unfolding. Discontentposylyuvalosya people. In all the upheavals accused King and hesitantLegislation Activitiesing fees. Morefound more people like the idea of elimination of the monarchy and the establishmentRepublic. In the great movement for a republic role played by political clubs,which at the time zastupaly party. The leading place among them occupied Jacobinclub, whose members gathered in the library of Monastery. Jakob disease. Its leaderswere Marat, Danton, Robespierre. Jacobins became incarnate in the future extreme,intransigence in the revolution.

After theconstitution of the Constituent Assembly was dissolved and held elections to the Legislative Assembly. They elected 745Deputies. Almost 1 / 3 were constitutional monarchists. Jacobins was twiceless, the same with them broke deputies from the Gironde department.

Meanwhile,situation is complicated by interference in the internal Governments of France neighboring European countries. Questions about the war notrising from the agenda of the Legislative Assembly, which began its work on 1October 791 Girondins stood for something to start the fight againstanti-French coalition of European countries, believing that the war will unite the peopleand will bring victory. Supporters of a constitutional monarchy that had previously met with thefelyaniv monastery, spoke out against the war. They feared the people, androyal power. The winning idea

Girondins, especially sincethat the war had turned and the king himself, albeit with their own reasons. Francewas on the verge of war against a coalition of other states.

Against France lashtuvalysya speak primarily Austria andPrussia. They supported the Swedish, Spanish and Sardinian kings. BeginningWar approached seditious activities of aristocrats who had fled from France andsettled in the border towns.

The reason for war was the requirementmonarch. Austria to the Lawted Assembly of Franceabandon the constitution. This was a direct interference in the internal affairs of the country,Why could not bear the majority of thesemeeting. In April 1792 Austria was declared war.

Legislative Assembly had false imaginationstrength of the French army. She was not ready for war. Her plans in advancebecame known to the Austrian headquarters. Some officers intentionally paved the wayAustrian Army.

To fight against the revolutionaryFrance formed the first coalition, which included Austria and Prussia. InJuly Prussia declared war on France, which has suffered dramatic and destructivedefeat. Legislative Assembly had July 11, 1792 to appeal topopulation with an appeal: "Motherland is in danger." In defense of ParisDeparted army of volunteers. Reflections patrioticgrowth in the country has become famous "Marseillaise ("Anthemmarseltsiv). In the future, this song Marseilles battalion of volunteersbecame the national anthem of France.

The political crisis compoundedmilitary defeats. A wave of outrage among the Parisians called reports thatthat Marie - Antoinette before the battleAction gave Austrians management planmilitary campaign. Threat army commander interiorsVenta DukeBraunschweig destroy Paris if not restored the legitimate authority of the king andrebels punished, even more unitedpeople. August 9, 1792 was formed rebel revolutionary Commune of Paris. Innight of August 10 under its Thousands of people surrounded the leadership and thencaptured kingsSki Palace Tyuilri.Legislative Assembly had to remove the king from authorities, however, bysome time and the Commune was declared unlawfulNoahorganization. The new government - Interim Executive Board - formedGirondins. Minister of Justice was one of the Jacobins - Georges Danton. 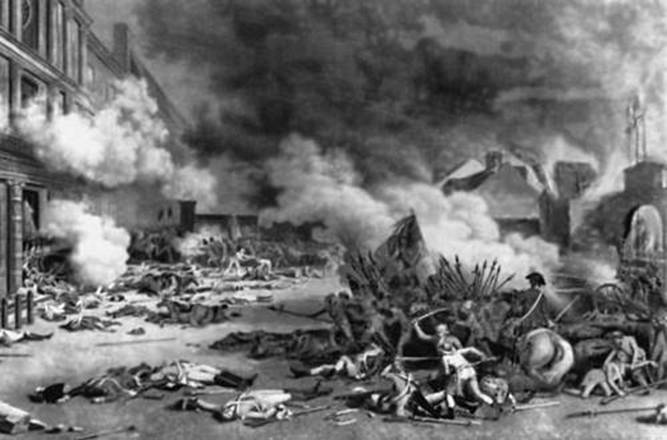 Do not ceased their activities and commune headed by Robespierre and Marat.Around her hurtuvalosya many residents of Paris and its environs. Radicalcitizens called sansculotte. Yes aristocracy at first contemptuously ymenuvalarepresentatives of urban poor who, unlike the nobility, not worn short, andlong pants.

15 began in August 1792 elections to the National Convention (meeting) thathad to revise the constitution. Electionrights were granted to all men who have reached 21 years of age, property qualificationseliminated. While in Paris lasted elections steadily approaching Prussian herearmy. Force lucky Parisians gather in September, near the settlement Valm 20September 1792 received the French victory over the Austro-Prussiantroops. On the same day in Paris meeting convention, which decidedElimination of the French monarchy and the proclamation of a republic.

Of the 750 deputies of the Convention right136 were moderate wing of the Republican members of the departmentGironde. They supported the "quagmire" - centrist majoritynumber about 500 members. Leftwing members formed a 113 - yakobintion, called the"Mountain" (they are placed in the upper ranks of the courtroom). Jacobinssupported the further deepening of the revolution, reflecting the interests of those who weredissatisfied implemented transformations. Girondins defend interestsliberal, mostly commercial and industrial bourgeoisie. Vous were satisfied with the Republic andthought continuetion revolution threatening private property. FromJacobins sought help improve your city plebs, the peasantsand of the bourgeoisie, which felt itself deceived. By the end of May 1793 inConvention between the "Mountain" and Gironde there was a constant struggle. Mostembodied the interests of the Gironde were Brisso and Vernyo and"Mountains" - Robespierre, Marat, Danton and Sen - Zhyust.

The two main issuesconsidered in the Convention, there were questions of war and the fate of the King.

Spring 1792revolutionary army moved on the offensive, VNAa consequenceFrench territory was cleared of invaders. French troops movedborder and joined the Savoy, BelgiumRhineland. Here they formed a new government with a view toThese include the territories of the revolutionary France. After that, the EuropeanMonarchs began to seriously worry about his fate. Meanwhile, at the requestGirondins were re-to the Commune of Paris. They brought the advantageurban poor, and therefore the Jacobins.

Serious disputes have arisen inConvention on the death of King. Jacobins demanded trial of the King, andGirondins blamed them in pursuit of dictatorship and delaying the imposition ofdecision. The situation changed dramatically after one of the rooms of the RoyalPalace found documents that showed connections with the opponents of the Kingrevolution. Then in the Convention was held roll-call vote that for which punishmentdeserves King. 387 deputies supportedfor the death penalty, a little less - by imprisonment. In January 1793Louis XVI ice gave the courtaccused of betraying the nation and executed by sentence of the Convention. 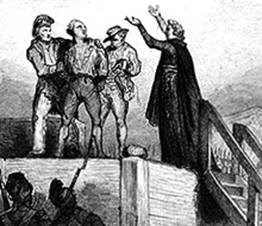 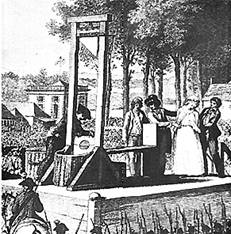 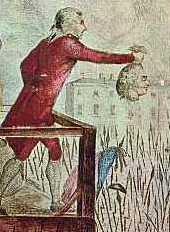 Against the backdrop of political strugglepowers exacerbated the problem of population products. Warviolated the economic relations between different parts of the country. Industrialproduction of poorly developed, so do not even have enough goods firstnecessary. Urban and rural poor sought to establish firm pricesproducts - maximum. Spokesmen theirinterests in the Convention were "crazy" - so called deputiesmentswho demanded the merciless fight against speculation. Girondins rejected maximumthat undermined the business, limited the freedom of trade.

In the northwestern part of FranceVendee, a revolt broke out in March, supporters of the monarchy (Royalist). The mainforce the rebels were peasants, dissatisfied with the decision of the agrarian question.

In a country increasingly spreaddisappointment in the moderate Girondins policy. their desire to avoid publicdefined as war, attempts to solve the foodproblem by supporting private initiatives were unsuccessful. Thisdecided to use the Jacobins, who proclaimed the need for rescuerepublic at any cost. At their request was created March 10Revolutionary Tribunal - the court with extraordinary powers. This act in the countrylaunched the revolutionary politics of terror. May 7 under pressure JacobinsConvention created a Committee on Public Salvation, which went credentialsof warfare and the fight against the counterrevolution. Trying to enlargenumber of their fans (their social base), forced the Jacobins ConventMay 4 to adopt the Law on introduction of solid prices for grain and flour.

All ж Girondins still in manydepartments and in the Convention usedmore successfully than the Jacobins.

From the speech of M. Robesp 'Pierre of the National Convention ontrial of the King December 3, 1792 р.

What to make ... to strengthen the republic, who was born? It vkorenyty deeply in the hearts of contempt for the monarchy and stun allKing fans ... Louis called the rebellious French people and in orderto punish him, the army called tyrants, their sorodychiv. The victory and the peopleagreed that he was a rebel, and why not Louis can judge, he was already convicted. Or convictedit, or republic was not recognized as innocent.

Proposal to conduct litigationover Ludovic XVI у any form of a return toroyal and constitutionalfoot of despotism ... Indeed, if Louismay be subject to legal proceedings, Louis could be justified, it can befound not guilty ... If Louis justify that be with the revolution? If Louis were perfect, all defenders of freedomdiis slanderous ... Louis must die so that there was a homeland.

1. What are the arguments adduced in relation to need immediate RobespierreKing executions, without trial and investigation?

2. What is your relationship to the requirementsexecute any person without trial? Can I justify it needsRevolution?

1. What evidence of politicization of French society?

2. Tell us about the beginning of the revolutionary wars.

3. What events preceded by proclaiming the French republic?

4. As there was war between the revolutionary army and the anti-Frenchcoalition?

5. Describe the fight Gironde and "Mountains"

6. What do you think caused the failure and success of the Jacobins Girondins?