main fuel resources in the world are oil, natural gas, coal and lignite. The total area of coal basins and deposits of up to 15% of the land. They are mostly concentrated in the northern hemisphere (Title 10 of the largest pools of black and brown coal are subscribed to the map).

Oil and gas is produced in 80 countries worldwide. But it is precisely in the countries of the Middle East is concentrated more than half the world's proven oil reserves and a third of world gas reserves. Significant reserves of oil are explored also in South America, Southeast Asia, North Africa. Among the countries largest reserves of natural gas is Russia, oil - Saudi Arabia.

fuel resources, as well as other mineral resources are exhaustible and non-renewable. At the current pace of their stock runs out quickly, so there is a need to find and use other, non-conventional energy resources. Now the world is already using wind power, tidal, solar and geothermal energy.

The map contains information about the geothermal resources of the Earth, explored in the 50's you the world. The most significant are in areas with high seismic and volcanic activity in the so-called geothermal zones. Geothermal fields containing dry steam is used for the construction of geothermal power plants. First GeoTPP were built in Italy. Now they are in the U.S., Mexico, Japan, Russia, Canada, Switzerland, New Zealand. In the U.S. state of California operates the world's most powerful GeoTPP Geysers. Much more widely used for heating the earth's interior heat. Thus, the capital of Iceland, Reykjavik, from 1930 uses geothermal energy for heating. 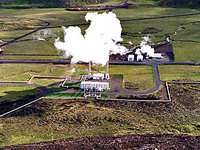