The map shows countries in the region of North America (Anglo-America). In this region are outside the U.S., Canada, and three dependent territories: Greenland (Denmark), Bermuda (UK) St. Pierre and Miquelon (France). Shown separately Hawaii (50 th U.S. state), located in the Pacific Ocean 4000 km off the west coast of the United States.

Anglo-America is one of the major economic and political centers of the world. The leading character is played most powerful country in the world the United States and one of the leading industrialized nations - Canada. Both countries belong to the Great Eight. Their economies are closely integrated with each other.

United States - a highly developed postindustrial countries. Almost 70% of workers employed in the production sphere. The U.S. accounts for a quarter of global industrial production. Of particular importance are the latest high-tech production: the exact and transport engineering, chemical industry, nonferrous metallurgy, electric power. Traditionally, the role continues to play a textile and food industries.

Agriculture United States - highly concentrated and diversified. It satisfies the internal needs of the country's food and raw materials and provides a significant portion of export earnings. The basic unit of agricultural farms are characterized by a high level of technical and scientific support and as a result, high productivity.

across the country there is a clear zonal specialization of agriculture. Here there are the following agricultural zone:

? Wheat - from Canada to Texas;

? hlopchatnikovy - the valley of the Mississippi River;

? are grazing beef cattle - the mountain states of the West;

large areas of vegetable production and horticulture is California, which provides half the world's third collection of lemons and oranges. At the Central Valley grows soybeans and sunflowers, Florida and Hawaii - Sugar cane, on the coast priatlanticheskom - tobacco, peanuts and cotton.

in the territorial structure of the U.S. economy can be traced some differences. The northern part of the country (industrial North) produces more than half a diverse industrial and agricultural products. The largest centers - Chicago, Detroit, New York, Philadelphia. Here almost half the population (mega-cities Priatlantichesky Bosvash - 50 million people and Priozerny Chipits - 35 million).

The western part is the area of later development, but the pace of development is ahead of others. Is dominated by mining, forestry, sheep farming and tourism. Los Angeles called Air-raketokosmicheskoy capital, and here is the center of the film industry Hollywood. Las Vegas - the center of gambling and entertainment. From San Francisco to San Diego, California Megalopolis stretching San San, with a population of 25 million people.

modern American economy characterized by high concentration of production and capital. Most big American companies, by their nature, are transnational (General Motors, General Electric, Boeing, ІVM, Microsoft and others). The State shall promote the development of advanced high-tech industries, funds promising scientific research, especially in the military-industrial complex and adjacent areas.

Canada occupies the northern part of the mainland. By area, the country second only to Russia. Canada is one of the British Commonwealth of Nations and the formal head of state here is the Queen, who appoints the Governor-General on the recommendation of the Prime Minister of the State. Canada - a federal country in which the acting head of state does the Prime Minister.

The richness and variety of natural-resource potential of Canada is one of the leading places in the world.

Canada is a country of resettlement of capitalism, its development took place while maintaining the political dependence on the metropolis, under the influence of European and later U.S. capital. An important feature of modern economics associated with the colonial past of the country remains export-oriented economy and the resource dependence on foreign capital. Over 50% of the national economy controlled by foreign capital, about 3 / 4 of which are American. Primary sector exports from 25% to 60% of its products. The world market, Canada exports minerals, forests and some agricultural products. Almost 3 / 4 of Canadian exports go to the U.S..

Accommodation economy characterized by high spatial concentration in the south, to a lesser extent - in the central provinces of Ontario and Quebec. Here are concentrated all manufacturing industries and mining areas of mineral resources. The largest industrial centers - Montreal, Toronto. The northern areas are under development. In areas with extreme conditions of life is being produced certain kinds of minerals and disseminated traditional occupations of the local population (marine mammal hunting, fishing, hunting deer and fur-bearing animals). Prairie provinces (Saskatchewan, Manitoba, Alberta) are the main agricultural areas. They specialize in grain farming, beef cattle, sheep. Canada also grows sugar beets, wheat and barley exports.

In 1999, the United Nations has recognized Canada the most attractive country for people's lives. This estimate is related primarily to the level of social guarantees, the insurance industry, a variety of benefits, welfare and recreation facilities, etc. Achievement of Canada in this area are recognized worldwide. 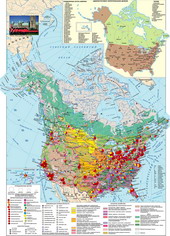 United States - a country of skyscrapers

During the presentation in the Oceanarium. San Diego, USA

The prison on the island of Alcatraz (now - the tourist attraction). San Francisco, USA

Alaska is one of the key areas of the U.S. Fishing

A romantic trip along the beaches of Costa Rica

Trader in the market. Quito, Ecuador 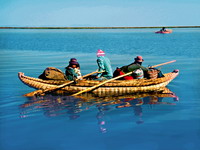