Emblem - a symbol of family, city, state. Translated from the German word emblem means "heritage". This is no accident: in fact from ancient times were marked with different signs (branded) cattle lords marked coats of arms - generic marks - its property. So long arms was essential criterion (attribute) of power, primarily property, land.

national emblem symbolizes the state and indicates the limits of its possessions, due to her property.

Ukraine has approved legislation (Article 20 of the Constitution) is the small State Emblem of Ukraine - a golden trident on a blue background. Trident is one of the most ancient sacred places. Image of trident in Ukraine found on the sites of Tripoli culture (about 6 thousand years ago). The ancient gods portrayed with trident. He uvinchuvav rods Scythian kings.

in Kiev Rus, the trident has spread from the X century. as the grand mark.

Do you notice that the word trident contains the number three? This number was considered magical. Recall that in folk tales told about the three heroes, three wishes and three tasks that must complete hero of three roads, etc..

Trident can be drawn so that it will weave cherished letters to every Ukrainian word "freedom».

deep roots in the history of Ukrainian statehood are other emblems. In glorious Zaporizhia Army emblem was engraved on the military and seal depicted a Cossack with a musket (self made). This emblem also is considered a national symbol of the Ukrainian people.

came to us with another famous Ukrainian national and state symbols - the golden lion. When Prince Danilo Galician founded a new city, naming it after his son Leo lions, he gave his coat of arms: a golden lion on a blue background. For the past seven and a half centuries is Lviv - the city of lions.

Flag - a certain color or colors and forms panel with emblems and other decorations, which is a symbol of the country, territory, organization, party, even one person. Depending on the ritual flag attached to the flagpole, raised on the mast, or simply posted rozstelyayetsya.

Ukrainian national colors - blue and yellow. From time immemorial the Ukrainian land was tilling the land. Blue sky over golden; significance level - that which puts great content now in the national colors every Ukrainian patriot. So, our flag - blue and yellow. Is it possible to say that he yellow-blue? No, because the rules of heraldry (historical discipline that studies arms) color "read" from top to bottom. To show respect for the flag, bowing his head or bowing, and sometimes stand on one knee. Military give honor to the flag.

Anthem - a solemn song. In Ancient Greece hymns glorifying gods and heroes. Now we can hear the hymn of the Fatherland, anthem nature.

Constitution established that all the ceremonial meeting of the state value starts and ends the execution of the State Anthem of Ukraine.

When contribute or take out the flag, anthem when performing, you have to get up. 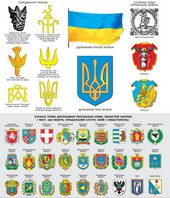 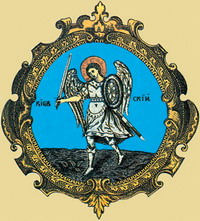