Atlantic Ocean is the second area after the Pacific Ocean. In the meridional direction it extends across all geographical zones of 16 000 km and this explains a great diversity of climatic conditions. Ocean water is very warm, though in the extreme south and north the temperature drops below 0 ° C, and therefore for local areas is a common floating icebergs.

width of the Atlantic Ocean near the equator least so it felt the impact most continents of the ocean.

Atlantic coastline is divided into the northern hemisphere: there are large bays, seas and many islands. In tropical latitudes of some of the islands formed due to the increase of coral shelves.

A large size and considerable length of ocean climate is extremely diverse. The water temperature decreases towards the equator to the south and north. Water salinity ranged from 8 ‰ in the Baltic Sea to 37 ‰ in tropical latitudes. As much air circulation and water mass Disorders zonal distribution of temperature and salinity distribution.

organic rich world of Atlantic fish ( mackerel, tuna, cod, herring ), mammals ( whales, seals, sea elephants ) and many others representatives of wildlife. In the waters of the ocean is intensive fishing and seafood.

Because ocean shores washed by many countries (including USA, Canada, Western Europe), here lie the main sea routes. Ocean waters is the lion's share of world passenger and cargo traffic. Atlantic Ocean is connected to the Indian Suez Canal , and the Pacific - Panama Canal . The opening of these channels respectively in 1869 and 1914 years is much reduced sea routes between countries and continents, as well as pozhvavylo navigation.

intensive economic use of the ocean has its negative consequences. Large area of the central part of its highly contaminated as a result of accidents of oil tankers, sinking boats and dumping of nuclear waste different. All this causes great damage to the ocean and encourages international environmental organizations struggle to maintain a consistent reduction of technological and ocean conservation of its biodiversity. 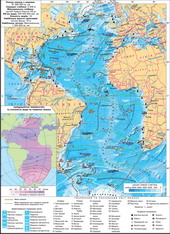 The average annual temperature and salinity of ocean surface 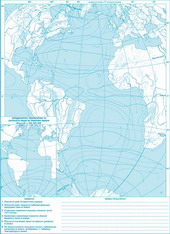 Lives of many birds associated with the ocean

In the waters off the Great Barrier Reef

Cruise ship off the coast of Alaska