Africa washed two oceans: Indian and Atlantic. In the north of the Mediterranean Sea separating Africa from Eurasia. The smallest distance between the mainlands - in the Straits of Gibraltar, which connects the Mediterranean with the Atlantic Ocean. In northeast Africa, Eurasia, separating the Red Sea.

In Africa, many rivers. This flow is the longest in the world River Nile (6671 km), formed from the merger of White and Blue Nile, and most affluent Eastern Hemisphere River Congo. Numerous lakes of the continent have different origins: the second planet deep lake Tanganyika formed in faults, the continent's largest lake Victoria have a trough in the basement of the ancient platform, and Lake Chad is a remnant of ancient sea.

surface mainland increased significantly above sea level (average height 660 m), over 70% of it lies at altitudes of 300-2 000 m. High Plains mainland extend for hundreds of miles in a plateau. The highest is the eastern and southern parts of the continent. The highest point - the volcano Kibo in Kilimanjaro massif (5895 m) and lowest - level of the lake. Assal (-155 m).

mainland relief associated mainly with the structures of ancient Precambrian platforms, some sections of which were rejuvenated during the Alpine folding and Baikal. Complex horotvorchi processes which took place under the influence of internal forces of the Earth, accompanied by the spout of magma and volcanic eruptions. The continent is active and extinct volcano.

the North African desert is the largest planet Sahara. In deserts, rivers dry up, forming a dry wadi bed and salt lakes Schott .

very warm mainland Africa. It is actually not such a winter in which we are accustomed. The coast of the continent washed by the warm currents mainly to create favorable conditions for living corals. Therefore, in the Red Sea off the coast of Mozambique, Fr. Madagascar and the Comoros islands are coral reefs and islands. 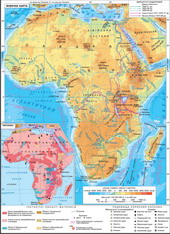 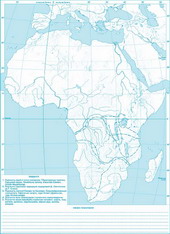 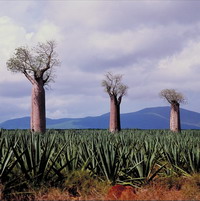