area of North America along with the islands - 24 250 thousand km2. Continent is located in the Northern Hemisphere relative to the equator in the Western Hemisphere against the zero meridian.

North America washed by three oceans: the east - the Atlantic in the west - the Pacific, from the north - the Arctic.

Construction of the Panama Canal was not easy sea passage from Atlantic to Pacific. Now through this channel is intense maritime traffic.

surface of North America has a general slope from west (from the Cordillera), east to the Atlantic coast. Southeast mainland are Prymeksykanska, Pryatlantychna Missisipska and lowland, which formed on paleozoic platform. North of the lowlands are Missisipskoyi Central Plain (formed in Precambrian platform), and from them the north - Lavrentiyska height that matches the performance of crystalline basement to the surface - the Canadian shield. And Central Plains, and the height determined Lavrentiyska minor height - from 200 to 500 m. East of the ancient plains rise low mountains of Appalachia, which formed during the folding hertsynskoyi. West of the central plains and hills Lavrentiyskoyi surface gradually rises, crossing the Great Plains to the height from 500 to 1 000 m and above.

Great Plains from the west, bordered Rocky Mountains, which formed during the Mesozoic folding. Parallel Rocky Mountains along the entire Pacific coast stretches a huge mountain range - the Cordilleras. North of them formed during the Mesozoic folding, the Alpine folding suffered to lift and turned into a massive mountain system with the newly alpine mountain facilities. Further south within the system reaches Mexican highlands (Alps formation), which gradually decreased to the Panamanian isthmus.

Since the Cordillera - the mountains are young, they are now a zone of active seismicity and volcanism.

Islands, adjacent to the extreme north of the continent covered with eternal ice (Ellesmere Island, Greenland, Baffin Island). North American glaciers with an area yield only ice in Antarctica.

along the coasts, which occur in tropical latitudes, stretching out the coral reefs. Most of them on the shelf of the Caribbean Sea and Gulf of Mexico.

in North America is the territory of wetlands - marshes in river basins and Nelson Albany, upper Mississippi, near the Great Lakes and Winnipeg Pryatlantychniy lowland and peninsulas of Florida, Yucatan. There are arid areas, especially on the Great Plains and Great Basin, where water skontsetrovani in the Great Salt Lake.

In narrow bays in the northeast mainland of the world observed the highest tides of the sea - 18 m (Bay of Fundy). Largest river in North America, Mississippi is the third longest river in the world. 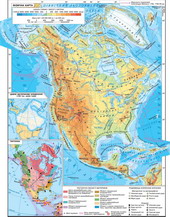 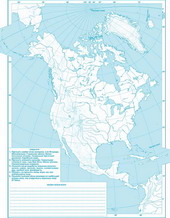 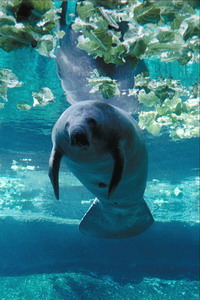 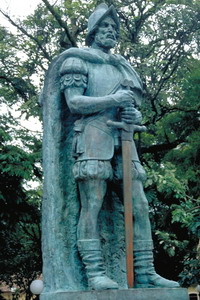