About continents bahatovidomo you already and you know that each of them unique. Among them vyriznyayutnayspekotnishyy mainland of the world's deserts, "the mainland, by contrast, yakyyroztashovanyy across the equator, Ice Continent, called materykomuchenyh;  Carnival mainland and znamenytyhfutbolnyh teams continent's largest economic power and the mainland, where myzhyvemo.

In this section you navchytesyavyznachaty geographical position mainland - Position relative to the equator, tropics, polar circles, initial meridian, as well as other continents iokeaniv (Annex 4). You will know where to look extreme points (Mostly capes), limiting the mainland from the north, south, west and east. For a map you will get an idea of how much chyslabko divided shoreline Mainland-bound waters and seas, which washed him.  You will learn about research history of the continent - Open it and vyvchennyamandrivnykamy and scientists. You are more familiar with the peculiarities of their geological structure і relief, climate і inland waters, natural areas і environmental issues, population and countries. So you learn davatyharakterystyku mainland.

1. Remember that floats the first time around back in Africa Oldest day.

2. What sailors a day of great geographical Discovery sailed along the coast of Africa?

GEOGRAPHICAL PROVISIONS. Of location of the continent on earth depends on its natural conditions. Learning determine the geographical position of the mainland to help plan (Table. 2).

Africa has a peculiar location. She - the only mainland that almost crossed the middle equator. So Africa is in both hemispheres of the Earth. Seasons in different parts of the continent opposite: when in the Northern Hemisphere summer, the South - winter. Almost Africa is located entirely between the tropics in a hot zone - in equatorial, tropical subekvatorialnyh and climatic zones. So Africa - Hottest continent on Earth. Relatively Prime Meridian it lies almost entirely in the Eastern hemisphere, only a small part of it - in the West.

Of other continents Africa Remote broad expanse of Atlantic and Indian oceans that wash its shores. Exception - Eurasia, where it adjoins very close. From Europe Separates Africa Mediterranean Sea and narrow Gibraltar(14 km). Connects Africa with Asia narrow strip land - Suez isthmus width of 120 km. In Nineteenth century. They made there was Suez Canal. Of Asia Africa separates Red Sea and Bab al-Mandebska Strait. Seas and oceans that wash the mainland, make a significant impact on its nature. Near the African coast are important world trade routes.

Shoreline African weakly divided. The largest bays are Aden та GuineaWhich is widely open to the side Ocean. To the east is the only major peninsula Somalia. Most island Madagascar separated from the mainland Mozambique Channel. Africa also belong to the small Islands Canary, Seychelles et al. Mainland shores very steep, with steep ledges are handy little bays.

Journey to the word

The ancient Greeks named Africa Libya. Name Africa з’appeared to BC. The secret of this name and still no unequivocal interpretation. There is an assumption that the word Africacomes from the Berber tribe afryhyThat lived near Carthage, and means he did not know cold. Later title Afryhiya spread to the whole continent.

Interestingly, Red SeaLike all the sea has clear water. However, at a depth of unexpected phenomenon - the water becomes red as blood. This explains the presence of microscopic algae in the water. Sea for a long time called Eritrean(From the Greek erytros – red) And then translated this name literally - Red. 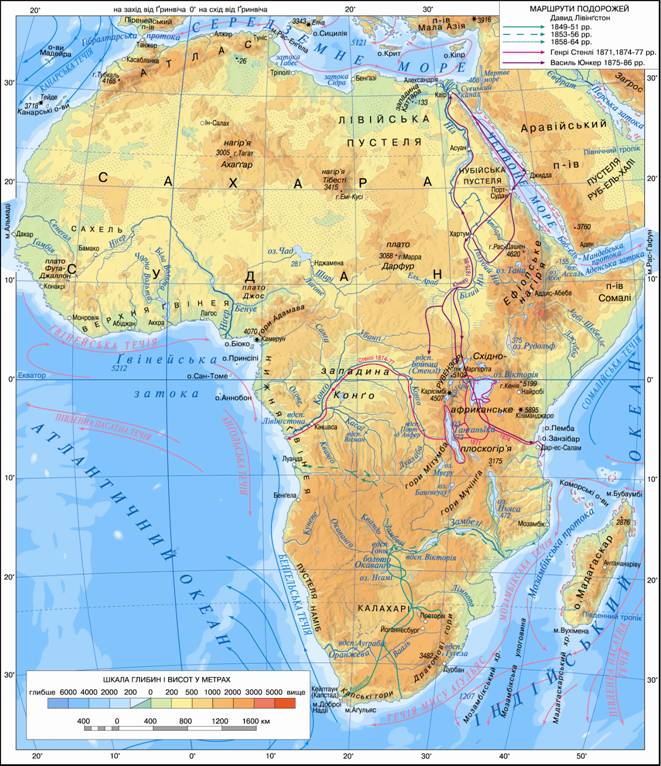 1. Find and fix errors in describing the situation of Africa relative to other continents: "Africa is located south west of Eurasia, east of Australia, south of the Antarctic, northwest of South America, southeast of North America.

2. Determine the coordinates of the extreme northern and southern points of Africa and calculate the length of the largest mainland from north to south (10 = 111.3 km).

3. Which of the bays of Africa can rightly called seas? Why?

4. Name the warm and cold stream that runs along the coast of Africa. As they  affect the nature of the mainland?

5. What features of nature Africa defined by its geography?

RESEARCH AND DEVELOPMENT. Africa was open themselves Africans. Thus, in ancient Egypt long before our first era of accumulated knowledge about the mainland. It is known that 3,5 thousand years ago Egyptiansperformed seagoing coast vdovzh Red Sea to the south. Pharaohs sent his subjects in country Punt (Now Ethiopia and Somalia), where pryvozylysya ivory, gold, valuable species of trees. The most significant discovery in geographic VAnd art. BC. e. made Phoenicians who were brave sailors. At the time, nobody knew Africa from all sides it is washed with water. For three years they obihnuly Africa, proving that it from all sides surrounded by water.

Instead, Europeans and Asians Africa, which was the nearest neighbor of Eurasia, for many centuries remained mysterious. Greeks, Romans, Arabs  it uyavlyalasya island or peninsula connected to Asia, which stretches up to equator. Many centuries there was the belief that life in hot equatorial climate is not possible, there sun burn to black people, but the sea is boiling and evaporate.

In the VII century. Arab traders crossed the Sahara and equator. Later Arab explorers discovered ComorosAnd in Article IX. reached Madagascar. Known you already Moroccan traveler Ibn Battuta in XIVArt. during his many travels crossed Sahara and explored the coast of East Africa and Western Sudan.

У XV Art. considerable efforts to study the coastline of Africa have made Portuguese sailors who sought sea route to India. In 1488 Bartolomeu Dias swam along the western coast of Africa and reached its southern surroundings. He discovered the capes of Good Hope and Ahulyas. After 10 Years opening of the southern coast of Africa continued Vasco da Gama. So "Indian scouts" set the outlines of the African continent. The Portuguese brought in Europe the first black African slaves. Subsequently, the slave trade began deal with the Dutch, British and others. It was a shameful and cruel period in history.

Instead hinterland of the continent remained unknown. In the nineteenth century. English physician David Livingston crossed the South Africa from west to east.  Carried away study of nature, he made a voyage to River Zambezi, Opened it a big waterfall Victoria, Investigated Lake Malawi і Tanganyika  described plants and animals. In 1849 Livingston crossed the Kalahari and found that it - not the desert and semidesert. Impressive accuracy with which the doctor with no specific geographical training, brought objects on the map. Livingston wanted to find the origins of the Nile, but seriously ill and died.

Explore distant Africa and our fellow Egor KovalevskyWho was educated in Kharkiv. In 1847-1848 he was his mining engineer, were sent to Egypt for help in search for gold deposits. The mission it a lot  traveled. Kovalevsky described the then little-known Ethiopian relief Highlands. He first suggested that the main source of the Nile is not blue, as if geographers believed, and the White Nile, whose top can be found in equatorial areas of Africa. Talented written Itinerary traveler zachytuvavsya Taras Shevchenko himself.

Geographic map of Africa have been clarified only mid-twentieth century. But still many mysteries of the continent not disclosed.

When Bartolomeu Dias in 1488 reached the southern coast of Africa, where raging storm. It was then it was seen Cape - land, serving in the ocean. After returning to Portugal, King Joao Dias II reported that the preferred route to India almost open. He also told of the cape is open and offered to call it Cape of Storms. But King, thinking that this title will scare seafarers, perenazvav it on Cape of Good Hope. In fact, first name more appropriate for the Cape, near which is rarely quiet.

1. Why study begins with its mainland geographical location?

2. Why is Africa the continent is called the highest temperatures?

3. Define the geographical location of Madagascar.

4. Who was the first scholar of Africa? What discovery they made?

5. What role Africa played in the study of swimming Portuguese? What are ocean currents that promote and hinder progress sailing ships of Vasco da Gama?

6. What are the famous opening of David Livingstone?

7. Tell us about the research of our countryman Yegor Kovalevsky.

8. Calculate the length of North Africa udovzh Tropic and Southern Tropic (10 = 102.5 km). Make a conclusion in hemisphere relative to the equator which is most of the mainland.

1.     Determine the coordinates of extreme points of Africa.

a) check and sign the name of extreme points of Africa;