1.     Remember the course of history of Ukraine that tribes and people inhabited the land of our country at different stages of development.

2.     What states and their units administrative-territorial division existed in the past on historic lands of modern Ukraine?

UKRAINIAN HISTORICAL EARTH. Пoryad with modern administrative-territorial units Ukraine are its іhistoric land  -Various in size and edges without clear boundaries. In past they were separate countriestheir creation or helltive units, areas of defense or state of the new economicSupport Forces. They differ material and Ukrainian spiritual culture, due to the influence of environmental and relationships with other nations.

Earth and the Middle Dnieper Basin Western Ukraine are to “old”historic lands. They Ukrainian people live longCreating in past number of their own states. Southern and Eastern Ukraine is "new" lands, acquired Ukrainian during the Cossackworks and after its dissolution. It is created by the Ukrainian Cossacks Borderland Middle Dnieper and Steppe Ukraine. Politically and organizationally oformyvshys in the Hetman state, it will extend its influence on the medullary Ukraine, and his freedom-loving act became legendary for all Ukrainian people, regardless of place of residence. 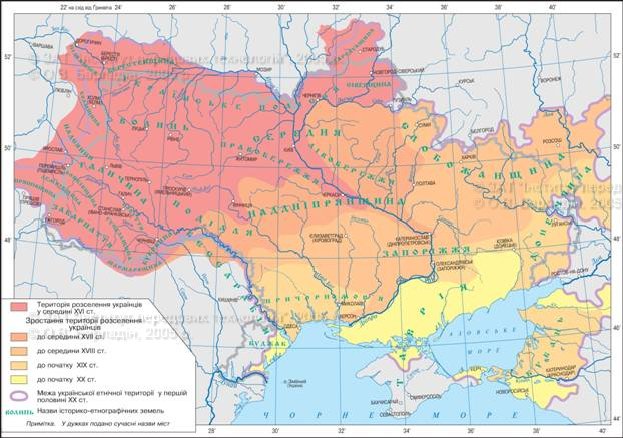 Historical lands Right Bank is the Kiev region, skirts and Bratslavschyna. History Kyiv region takes part modern Kievankoyi and Cherkasy regions and almost all Zhytomyr region. There existed Kyivske principality (originally independent, and then stock Lithuaniayou), Kiev Province (in Polish state) and Kiev Governorate (in Russian Empire). Skirts is between average flow Dnestr South Bug. It is known since the mid- XIVArt. as separate principalities in Lithuanian, and then - and in Poland Voivodeship province in Russia. West Podolia was merged with Galicia and horrible to AustriaEmpire. Administrative center and cultural center skirts was Kamyanets Podolsky. His castle hath a long timeshaft of the invasion of Turks and Tatars. Overall skirts was thickly covered with locking stronghold, To this day preserved their remains in Sataniv, Letychiv, Medzhybozh, Bari. Eastern skirts known also called Bratslavshchina. Bratslav magistratescos existed in Poland XVI – XVIII Art. Small township Bratslav was the center Province only three decades (it was still Vinnitsa), But the land title preserved in the historical memory of people now.

On Left-Bank Ukraine the longest (up to 80 years XVIII cent.) preserved signs of the Hetman state, because other its name - Hetman. After its dissolution the land area was divided by the Chernihiv and Poltava province. North Left Bank also known as Siverschyna centered у Novgorod-Seversky. Part of it is now in Russia.

WESTERN UKRAINE. Western Ukraine call those Ukrainian ethnic territories which as a result of State border in 1920 were outside the Soviettion of Ukraine - Poland (Galicia and Volin) Czechoslovakia (Transcarpathia) and Romania (Bukovina). Most of these lands was by CanadaNana to Ukraine during the Second World War, however okrayinni historical land remained in the neighboring States. The ancient tribes of the Western lands were dulibiv, Volyn, Buzhans and White Croats. In princely times, there existed Galician (capital - Galich) and Volyn (Vladimir) landAnd further - the Galicia-Volyn state. Oldest cities in the region is Belz, Luck, Terebovlya, Brest (Brest) and built during the reign Daniel Galiciaгоnew capital Holm and Lviv.

After the loss of independence Galicia came to Poland and Воlyn – to Lithuania. Over time there created Province Polish-Lithuanian state. From that moment until the mid twentieth century. History of Galicia and Volyni was the coexistence, interaction or Ukrainian oppositionty and Polish population. Since the end XVIII Art. Galicia was a province of Austria, where she earned samovryadnist and Volyn - Russian provinces. Between between the two world wars these lands were again in Paul stockdents, and in 1939 went to Ukraine. As part of modern Ukraine, Galicia occupied territory of Lviv, Ivano-Frankivsk, Ternopil and most of areas. East her "angle" between the rivers Dniester and Cheremosh known as a historical land Pokuttia. Historical Galician lands are also in Poland - Nadsyannya (with the center of Przemysl) and North Lemkivschyna. History Volyn covers land in Ukraine, Poland (Holm і Podlasie) And Belarus (Beresteyschynu). Fate Ukrainian population that lived in their ethnic lands in Poland, established tragic. As a result of population exchangeing between Ukraine and Poland (1945) and forced eviction Ukrainian Polish authorities (1947) on these lands has left almost no Ukrainian.

In XIX Art. Galicia was an active center of socio-political, science-educationhim, and cultural and religious life Ukrainian, and in first half XX Art. Western lands have become an example of national sacrificeI pray Liberation struggle of our people. Galicia is the birthplace of writingMennicke John Frank (with. Naguevichi near Drohobych) Kholmshchyna - historian Michael Hrushevsky, Nadsyannya - Geographer Stephen Ruddnytskoho and composer Mikhail Verbitsky (Author music anthem of Ukraine).

Transcarpathia (or Transcarpathian Ukraine), historic center which є Uzhgorod, covers the southwest part of the Ukrainian Carpathians and adjacent foothills. Hundreds of years it was a part of HungaryTHICKNESS, which affected the culture and everyday life locals, the interwar period came to Czechoslovakia(As an autonomous province of Subcarpathian Rus). However, Ukrainian identity populationing region preserved, as evidenced proclamation in March 1938 in Hust self-Carpathian Ukraine (which was broken uhorstal forces). And only in 1945 part of the Ukrainian Transcarpathian was incorporated into Ukraine. Ukrainian Transcarpathian ethnic lands fall within the boundaries of modern Ukraine - west (The historical land Presov Region in Slovakiarank) and south east (Maramures in Romania).

Bukovina known since the late XIV Art. Ukrainian population of the region have long lives close with Romanians. In 1940 he was divided between RouxMuni and Ukraine, which went to North Bukovina. Historic center Bucovina - Chernivtsi - A regional center.

Galicia - a land which all-solid territory reaches far away to the west? It is very small kusnyk Cathedral Ukraine? Galician timerUkrainian people are the most nationally conscious part of the whole Ukrainian people.

У XIII ­– XV Art. Crimea became national territory of the Crimean khanstva (with its capital in Bakhchisaray) which together with Turkey to extend its impact on the land of the Northern Black Sea Coast (Hence another name for Southernern Ukraine - Hanschyna). Much Ukrainian were then in the Crimea Tatars as prey.

Ukrainian Steppe Ukraine colonization attributed primarily forporozhzhyu. Zaporozhye – territory stay Zaporizhzhya Sich and Sewation “Carta” Cossack troops. Cossacks in Ukrainian steppes of’appeared end XV Art. and the first organs system as it political nucleus, emerged in the middle XVI Art. the island Low by Khortytsya Dnieper rapids. Subsequent battles introduced in the Dnieper River downstream until to the estuary, most of them were in the swamps of the Dnieper (Now filled with water reservoir Kakhovskoe). Earth Cossacks were lying on both sides Dnieper River: the west - to the Southern Bug and its tributaries of cyanosis on east - to the riverKalmius and Azov Sea. Of constipationzkyh lands under Yellow Waters in 1648 started winning march of the Cossacks in the national liberation war led Bohdan Khmelnytsky.

У XVIII Art. all in Southern land called New Russia went to Russia. In the development and settling the land, except Ukrainian Cossacks and peasants, was attended by Russians, Germans, Serbs Bulgarians, Albanians, Greeks, a significant percentcurrent city residents were Jewish. Together with Ancient City (defensive and shopping centers) there are new - trade and administrative centers, marine poreYou, industrial centers. Sevastopol Citywas founded as largest naval base of Russia, and Odessa - As Port-Industrialvyy center (at the end XIX Art. was the most populous city in Ukraine). In the Region was formed several provinces, which have large areas of grain production and its export to other country through the ports. Katerynoslav Province (Ekaterinoslav - modern Dnepropetrovsk) onend XIX Art. into a powerful mining and Memetallurgical base of the country.

Historical lands of Southern Ukraine is also TawRio and Budzhak. In broadly Taurus means territorythorium Tavricheskoy former province (centered in Simferopol), Which were Crimean peninsula and the land from the Black Sea-Azov Sea coast the Dnieper River. Name of the Crimea has had after XIII Art. when there Tatar tribes settled that founded the city of Crimea - The capital of their first Statehood (Modern Stary Krym).

The history Crimea leads of time before man Neanderthal type. Already from ancient times it was a crossroads of history of different stretch of waterMan, people cultures. Simultaneously with Crimean Tatars settled there Jews and Armenians, later - Ukrainian and Russians. They interacted civilizationtion of ancient Greece and Rome, Byzantium and the Kievan Rus, Khazar and Balkan countries, the Italian republics of Venice and Genoa, Golden Horde and Crimean Khanate and Ottoman Cossack Ukraine. This like many archeological sites, history, architecture and culture. From the spread in Crimea Ukraine Christianity (Which was adopted in the Greek cities still in III – IV c.).. However, Crimea often become scene long wars and fierce battles, and Sevastopol went down in history as a city that heroically in the course of several oboronyalosya wars. Tragic chapter of modern history of Crimea was eviction in Asia part of the USSR in 1944 Crimean Tatars and other indigenous inhabitants of the peninsula. Nowadays, they and their descendants returning home.

Budzhak - Canada Frontier Province Ottoman Empire between the lower reaches of the Dniester, DNnayu, and Black Rod Sea. After joining Russia Budzhak packaged Bessarabia province. Bessarabia – land between Bukovina, rivers Dniester and Prut, the Danube and Black Sea. For centuries, it depended of neighbors. In 1940 BessieRabi was transferred from Romania to the USSR. Two of parts - the northern (Khotinschyna) And southern (Budzhak) - went to Ukraine, the rest of the territory populated mainly Moldovans were created Moldavian SSR (now - Republic Moldova).

Podlasie, ground under Liakh"That is, about the Polish border, was settled Middle Ukrainian Dulebs tribe.

Sloboda (Sloboda Ukraine) populatedlyalasya Ukrainian Cossacks from XVII Art. Ukrainian settled Sloboda, why does the name of the earth. Significant influence on the lifestyle of the population had Russians who lived near. The largest settlement - Amounts, Romney, HarKiv, Raisins - Were centers regiments who had self-government in RussiaGeorgia was the state. Later, they joined in temrniyu centered in Kharkiv. Gradually the city grew into the largest cultural and industrial center in Eastern Ukraine (some time and Kharkov was the capital of the entire Soviet Ukraine). Within Ukraine Sloboda is part of Sumy region Kharkiv region and the entire northern Luhansk region. Part Slovakiabozhanschyny remained in neighboring Ukraine Russian areas.SLAdzhentsem Slobodian is a prominent Ukrainian philosopher Gregory pan.

Donschyna (Don Army region) lies in the basin of the Don, inhabited by Russians and Ukrainian. Currently, the limits of Ukraine is part of DonschynyCovering south east of Donetsk and Lugansk regions. In XIX Art. with the development coal and steel industry at the turn Donschyny and Caterynoslavschyny formed a powerful industrial region - Donbass, the largest centers of which were Uzivka (Modern Donetsk), Lugansk, Bakhmut(Modern Donetsk), Makiyivka, Gorlovka et al.

Іhistoric land - Are different in size Ukrainian ethnic territory of which served in Last various public functions and preserved in the historical memory of the people.

2. What are the differences in the historical development of lands in Central and Western Ukraine and lands of South and Eastern Ukraine.

3. What are the Ukrainian historical land within the modern Ukraine, which - beyond?

4. Give characteristic of one of the historic lands of Ukraine.

5. Using map and text of the paragraph, make a table of major historical lands of Ukraine as follows: