National revolution swept all Ukrainian lands, and was the product collapse of the Russian Empire and Austro-Hungarian Monarchy, which were in  at war with each other. But the main events of the early Ukrainian revolution associated with the collapse of the Russian empire and the revolutionary events that it was enveloped. Failures imperial army at the front and hardships, caused by war, were the direct impetus for the revolution.

The main precondition for the growth of the revolutionary process was a general social and economic crisis. At the beginning of 1917 became apparent collapse industry, transport and agriculture. Head of State Duma M. Rodzianko King wrote: "Russia's disastrous situation while deeply tragic ... "Fantastic increased indebtedness of Russia to countries Entente. Only the interest on debts exceeding all pre-war years budget.

The Provisional Government gave authority to the provinces and counties in the hand newly appointed commissioners. On the ground, have created new bodies authority - community councils and their executive committees. By social structure in  They were dominated by representatives of commercial and industrial bourgeoisie intelligentsia, the party - most were cadets.

Simultaneously with the authorities of the Provisional Government in Ukraine, as well as in  Russia began to emerge local council workers and soldiers' deputies. In  first half of March 1917 in Ukraine there were 43, they created mainly in industrial areas. Their founders were basically an all-socialist parties and the SRS Social Democrats.

In many cities Dnieper Ukraine reaction to the Russian revolution were thousands of demonstrations under national blue and yellow flags. Demonstrators took to the streets of Kyiv, Poltava, Odessa, Kharkiv, Chernihiv banners of "autonomy of Ukraine", "Let lives federal republic "," free Ukraine in a free Russia. "

The national idea hurtuvala different social strata of Ukrainian people. Under the increasing democratization of Ukrainian society  a chance to restore their statehood. In Ukraine, growing National Democratic Revolution.

2. Political parties in the Russian Ukraine

Development of revolutionary events in Ukraine depended on where political power go public. Aware of this, all political forces political parties and organizations have launched a struggle for influence on population.

In early 1917 the political scene in Ukraine were represented as all-(Cadets, the Mensheviks, the Bolsheviks), national (Polish, Jewish, etc.). And actually Ukrainian party. The most massive was the Ukrainian Party of Socialist Revolutionaries, which from Ukrainian liberals went even Hrushevsky. The main Revolutionaries tasks thought to restructuring the capitalist system socialist, deep agrarian transformation in the interests of the peasantry, Ukraine's autonomy within the Russian Federal Democratic state. 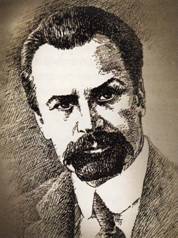 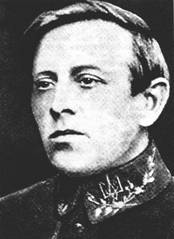 Liberal-oriented part of the Ukrainian intelligentsia was united in the ranks of the Ukrainian Party of Socialists-Federalists, composed  which included prominent figures of Ukrainian movement, S. Wilkens, D. Doroshenko, O. Lototsky et al. 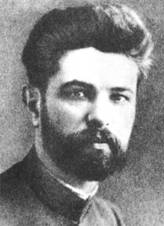 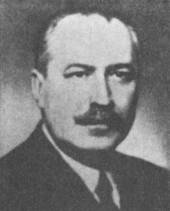 Ukrainian Society has been active progressives (TUP) reorganized in the Ukrainian Union of Federalists - autonomists that were at moderate positions and sought to create autonomy Ukraine on a federal basis in the stock of Russia.

The representative of the radical currents of the national movement were considered Ukrainian People's Party (UNP) and the newly formed Ukrainian party Self - the Socialists, which was ideal for "nepidlezhna Ukraine-Republic of free people, free labor. "

3. Formation of the Central Council

Despite the differences and disagreements on the future of Ukraine, Leaders of different political centers agreed and combined to a single governing body, who had lead the fight for revival of Ukrainian statehood.

As a result, the initiative of the Ukrainian Self and tupivtsiv 4 (New Style 17) March 1917 in Kiev was declared a Ukrainian Central Rada (UCR). It originated as a public political center, part of which included: the party of independent direction, the Ukrainian Party of Socialist Revolutionaries, Ukrainian Social-Democratic Labour Party, the Ukrainian party socialists-federalists, student unions, military organizations, the clergy, intellectuals and others.

Chairman of the Ukrainian Central Council 7 (20 March) was elected Hrushevsky, of which the well-known public figure D. Doroshenko stated that "no one is currently not fit for the role more national leader, as Hrushevskyi, no one even could not align with it recognized the general authority and respect of that which surrounded all his Ukrainian citizenship. 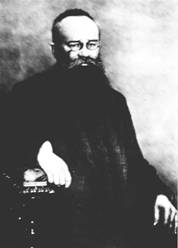 Mikhail Hrushevsky (1866-1934) historian, literary critic, journalist and civil and political  worker, leader of the Ukrainian national liberation movement in the first quarter of the twentieth Art. Born in Hill (now Polish territory). After Kiev University conducted research work in scientific institutions in Lviv and Kyiv. At the same time he was active in social and political life: one of the founders National Democratic Party in Galicia and later the Society Ukrainian progressives. Repeatedly he was arrested by the tsarist government.

In 1917 elected Chairman of the Ukrainian Central Rada, headed to the last days of its existence.

In April 1919 Hrushevsky left Ukraine and moved to Prague, where focused on scientific work. In 1924 he returned to Ukraine, was elected academician and has worked in domestic and world history. Author major publications: "History of Ukraine - Russia", "Essay history of the Ukrainian people, "" History of Ukrainian Literature "and others. in  which noted that the Ukrainian life must first of all find ourselves determine their capabilities, objectives and interests, take for yourself all that could be useful. Called not just search for ideals in the past, and solve the national question in the spirit of true democracy, in interests of the masses.

Hrushevsky died in 1934, buried in Kiev.

From the earliest days of the UCR its authority among the Ukrainian people began to grow rapidly because it advocated close to him socialist ideas and the national-territorial autonomy. These ideas were  for the UCR program. But its leaders some time consciously avoided discussion of acute socio-economic issues, following the motto National business primarily - social then. They feared that  focus on social aspects could divide the national movement. Further development of political situation in Ukraine showed the falsity of such policy. It turned for UCR loss of social support among Labor groups of the Ukrainian population.

Ukrainian revolution rapidly gaining strength. Already 19 March (on the new style of April 1) 1917demonstration was held, attended by 100 thousand persons. Under Ukrainian flags were soldiers, students, pupils and workers. On Square Hrushevsky City Council made a speech, which called seek autonomy of Ukraine. 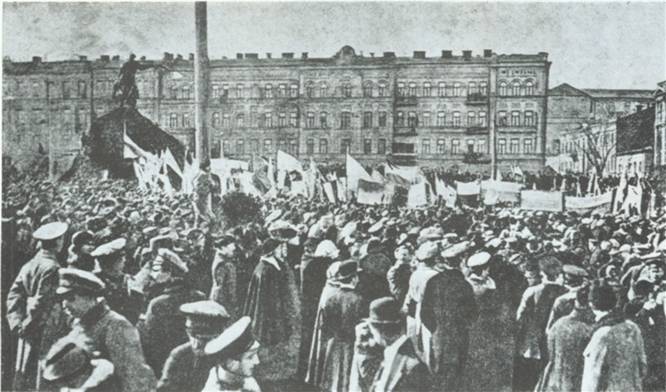 The manifestation of Sophia Square. Kyiv, 1917

The demonstration ended at the Sofia area, which was a popular assembly. It adopted the resolution.

At the same time there were Ukrainian National Council in Petrograd (Chairman A. Lototsky) and Moscow (A. Salikovskyy head), which has established close ties with the Central Council. 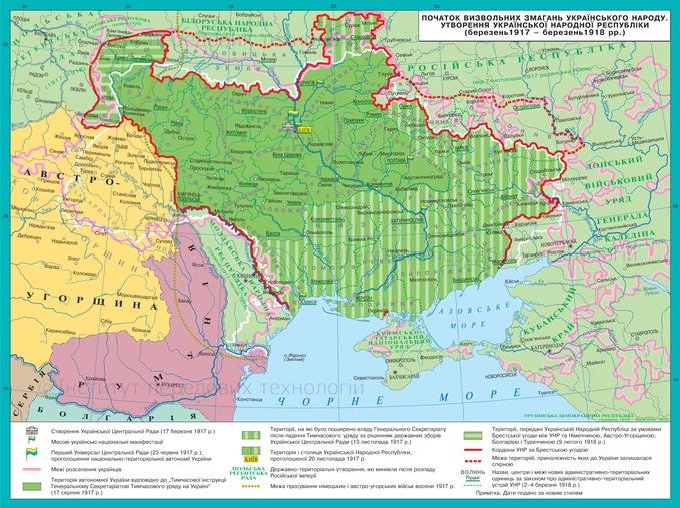 The struggle for the restoration of Ukrainian statehood could not be successful without the formation of national armed forces. Initiators of creation by independentist. They have been active propaganda work among the Ukrainian people, mobilized into the Russian army, which took in the First World War in order to achieve Ukrainization army. 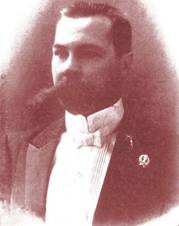 In garrisons with nationally conscious people were held meeting and formed military companies. In April in Kyiv, Ternopil, Kharkiv, Katerynoslav and other cities of Ukraine took place the military charges accompanied by the manifestation of national flags on  with the military. National military movement spread of the West Front. It was formed Ukrainian front-line council headed by Petliura.

In mid-April at the Kyiv-phase point, under the influence campaign work Self-Ukrainian soldiers before being sent to Front decided not to dissolve in a multinational military formations, and go to war within a single Ukrainian regiment name Bohdan Khmelnytsky. The regiment numbered over 3,5 thousand soldiers. From these Events began deployment of Ukrainian national forces.

Further development of the Revolution promoted the revival of old Cossack traditions in the creation of local self-defense militias. Together with revolution Ukrainian society began to embrace anarchy. This is especially  senses in rural areas where the population was forced to take care of self-defense. To this end, we started to write free Cossacks.

The first basket of the Free Cossacks appeared in April 1917 in Zvenyhorodsky district of Kyiv. Then began the formation of such formed from the nationally conscious peasants and workers aged over 18 years on a territorial basis of the Left, Volyn Zaporizhia other regions of Ukraine.

To establish an initiative group of Cossack units was not to collect less than 20 people a list of local administrative zatverdzhuvavsya authorities. Admission of new members of the Cossack communities were quite rigid. Each candidate was Cossack officers exam on knowledge Rules and instructions and gave solemn oath. Enrollment in Cossacks carried out on the recommendation of three members of the society that had responsible for subsequent acts of his ward. No fee public order Cossacks were not fed.

The basic unit of the Free Cossacks were a hundred, which formed from citizens of one village or city. Hundreds of cooperating in a hut, hut - in  regiment, and regiments of the whole province formed a basket. This formation led elected officers. The supreme organ of society were a general meeting.

In resolutions adopted at the congresses of the Free Cossacks, clearly it indicated the main goal - to support democracies in society, fight the enemies of the Ukrainian people, to prevent fratricide, to ensure law and order.