In spring 1917 the Ukrainian movement was on the rise. Its leader Hrushevsky, who headed the Ukrainian central council was trying give it a more substantial importance in public life. He set task - to transform the UCR, which was presented Ukrainian political parties, and Kyiv national public organizations nationwide in the political center, which had become organizational core of the revival of Ukrainian statehood.

These plans are connected with the conduct of the Ukrainian National Congress - the national meeting of representatives of Ukrainian political parties, and Kyiv national NGOs, the opening which preceded active organization work. In different provinces sent specially trained agitators were published in newspapers materials about the need for national assembly were given recommendations, whom they delegate more.

Ukrainian National Congress held 6.8 (19-21) April 1917  Kiev merchant at the meeting. Number of delegates came from places exceeded all expectations, there were about thousand. They represented a variety of workers, peasants, soldiers, cultural organization. Among the delegates were representatives of Congress nine Ukrainian provinces, Kuban, Galicia, all fronts. It was presented a series of reports: on the principles of federalism, methods of organization  autonomous system, the rights of national minorities and others.

An important consideration in the Congress elections have become the new Ukrainian Central Council. Total number of seats in Ukrainian parliament was determined in 150 seats. In terms of location Mission had the largest quota of the party, their complementary public organization (cooperative, student, female, etc.)..

Congress also discussed the organization of the Executive Board, ie territorial-administrative authority. Its representatives expected to include as part of UCR. UCR was elected Chairman Hrushevsky and his deputies Vynnychenko  and Efremova. Central Council elected its executive committee under Main Committee UCR.

Delegates Congress instructed the Central Council to request from the Interim Government of Ukraine's autonomy within the Federal Democratic Republic. Autonomous system had to be introduced areas where Ukrainian formed the majority population. Congress facilitated raising the prestige of the Ukrainian Central Council, turning it into the highest representative body of legislative power in Ukraine. 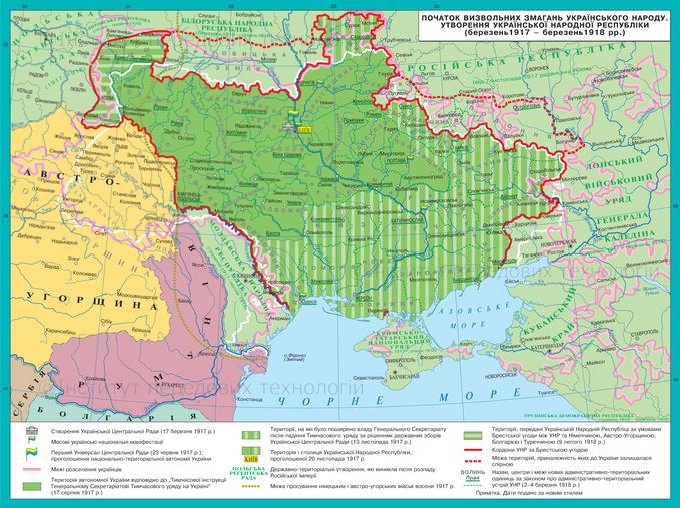 2. The first proclamation of the Central Council

After the Ukrainian National Congress authority Ukrainian Central Rada grew rapidly. It is supported by most political parties and social movements in Ukraine. It remained aloof  soldiers who were at that time very influential force.

On his attitude to UCR they declared in May 1917 on the first All-Ukrainian Military Congress, recognizing the Central Council as the only competent body to decide all matters pertaining to the whole of Ukraine and its relations with the Interim Government ". Members second All-Ukrainian Congress of the military in June 1917 demanded of the Central Council to proceed immediately to organize independent civil and military structures of the Provisional Government - to recognize all UCR order. The delegates were so determined to that zaprysyahnulysya not to return to their units, if not the Provisional Government recognizes the autonomy of Ukraine.

Late spring - early summer of 1917 was marked by further population growth of political activity Dnieper Ukraine. There was a series of congresses (peasants, workers, and Teacher Training etc..), where together with corporate issues discussed will political issues. Characteristically, all the meetings expressed support Central Council. However, delegates urged not to request autonomy Ukraine, and demand the information from the Provisional Government. Some, with radically minded participants in meetings, not called to fight for autonomy and for  independent Ukraine. 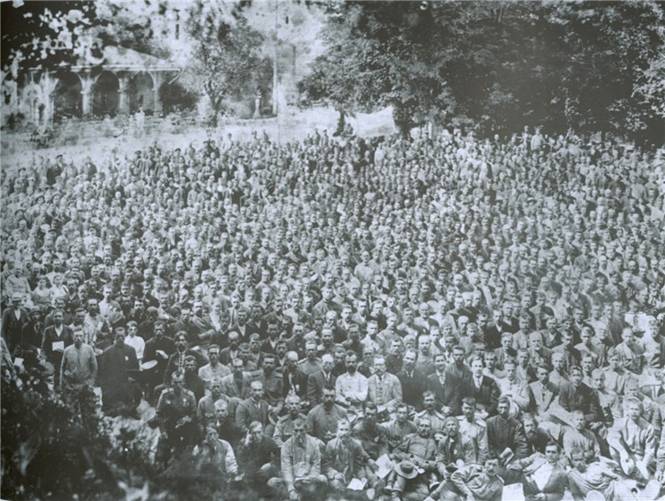 Provisional Government pretended that seeks solutions to swelling conflict, but actually delayed and postponed consideration of a Ukrainian matter to the National Constituent Assembly. This position of the Russian bodies led to resentment among the Ukrainian people. The situation is vividly discussed in  press, at a party meeting, public meetings and more. Early June newspaper Kievan Thought "wrote:" Last week a wave Ukrainian national liberation movement rose high and steep .

Its leaders decided to resort to such tactics, which would allow to save  Ukrainian high revolutionary spirit and yet not be made disruption in relations with Russia. This tactic V. Vynnychenko so called "No riots, no humility. The Council appealed to the people calling "To organize and proceed to form the basis for immediate autonomous system in Ukraine. " The form of appeal was elected universal. It word vidrodzhuvalo memory of Ukrainian statehood Cossack times.