1. Proclamation ZUNR and a UGA

Under conditions approaching defeat of Germany and Austria-Hungary in the First World War II in Western Ukraine began to increase movement national self-determination and formation of the Ukrainian state.

In early October, the political forces in Galicia, predicting change, deployed to preparing for the Ukrainian administration in the province. 19 October 1918 in Lviv held a general meeting of political and public figures in Galicia and Bukovina which was elected Ukrainian National Council. It includes all Ukrainian deputies elected to Austrian Parliament, members of the provincial Diet and three Ukrainian representatives from each political party. Ukrainian National Council adopted a resolution on the establishment of Ukrainian Ukrainian ethnic lands of the state. It proclaimed that the claim Eastern Galicia Lemkivshchyna, northwest Bukovina and Transcarpathia. Meeting participants decided to start with training Constitution of the Ukrainian state.

Formation of the western republics took place simultaneously with rebirth of Poland, which claimed not only to their ethnic lands, and  and to Ukrainian, particularly in eastern Galicia. Therefore, Ukrainian National Council has set for the Austrian government on her transfer of full power in Galicia and Bukovina. However, Austrian governor in the province refused to Ukrainian.

In response, the Ukrainian national-democratic forces have decided to take power through armed in Lviv. On the night of November 1, 1918Legion of Ukrainian Sich Riflemen led by Captain D. Vitovskyi occupied Lvov in all government institutions and strategic points. Austrian officer perelyakavshys, gave all power Under the administrative authority, and he in turn - Ukrainian National Council. 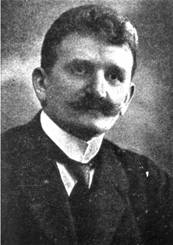 In 1907 he was elected ambassador to the Austrian Parliament and remained so until the collapse of the empire. The general public had a reputation decisive struggle for the rights of the Ukrainian people. During the First World War led the Ukrainian parliamentary representation (representation) which opposed the transfer of Western Ukraine under Polish power.

In 1918 he was elected president of the West Ukrainian National Republic.  As the president has managed to attract representatives of state building different political parties and movements. Thanks to the prudent policy, its government managed to avoid social conflicts. After the Unification of UPR and WUFR joined the UNR Directory, but had serious differences with Petliura in views on relations with the People's Republic of Poland.

After the liberation movement and the occupation of the West land left Poland and Ukraine became political refugees. Died in Berlin, where he is buried.

The supreme legislative body was ZUNR Ukrainian National Council. She created the State Secretariat - Executive authority of the republic.  He headed the influential leader of the National Democratic Party Levitsky KA, known to the public as an experienced lawyer. In K. Levitsky many years headed the Society of Ukrainian in Lviv Lawyers, was elected to the Austrian Parliament, led activities Ukrainian Parliamentary Club in Vienna.

Most deputies of the Ukrainian National Council did not share ideas socialism. They stood on the national-liberal positions and provided preference to building a strong democracy through reforms rather than revolutionary struggle. On  Unlike the leaders of the UNR, politicians ZUNR not admired Populism and declarative statements, and acted professionally, based on obmynaly laws and social and economic problems. In the early days ZUNR after the declaration was adopted several important laws aimed on the development of state-political and economic life of the republic. Among them: the law on the organization of troops, law administration law  on the judiciary. Were subsequently adopted laws on citizenship of land reform and others.

Central Authorities of Western People's Republic had a strong connection with an extensive, well organized system of local management, which benefited the public respect and authority.

Minorities have responded to a Ukrainian state on differently. Most Polish people regarded to ZUNR hostile, as supporting the idea of

ZUNR Government was well aware that to protect its interests in combating Poles are allowed only in the presence of a professional army. Problems of creation was entrusted to the State Secretariat for Military Affairs. The basis of the Ukrainian Galician Army (UHA) are military units - members of the November Uprising in Lviv in 1918 and two military huts USS Legion, who came from Bukovina. Subsequently, they began to join workers, students and even patriotic youth Dnieper Ukraine. The biggest problem for UGA was the lack of senior officers, especially staff who would have had higher military education experience in planning and operations.

The first units were created spontaneously. They had napivpartyzanskyy character and self-neglect of troops with food and ammunition. However, in early January 1919, the restructuring of the armed forces of Ukraine in the regular army. All military units were reduced to three buildings. Each  They had four brigades, which consisted of infantry hovel, regiment Artillery, Mounted hundreds and hundreds of communications, hundreds of technical and auxiliary units. Total mobilization and formation of new units occurred quickly and organized by spring 1919 in stock UGA there were 126 thousand officers and soldiers, including 52 thousand of those who fought on the front. 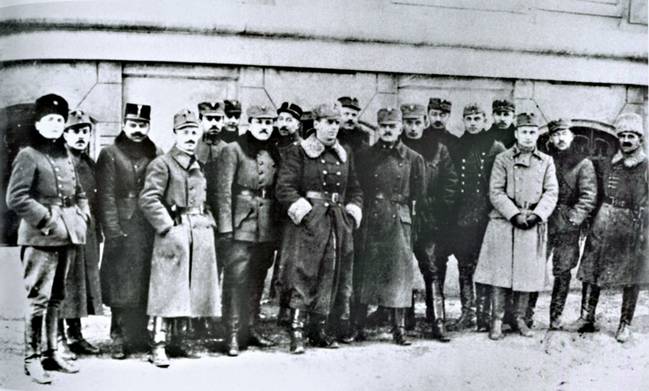 Thus, the struggle for self-Western population  finished creating its own national state. Its construction were involved in many political parties and movements. In the building were ZUNR participation of various segments of Ukrainian society, including national minority. Considered the new government policy contributed to the avoidance of acute social conflicts. 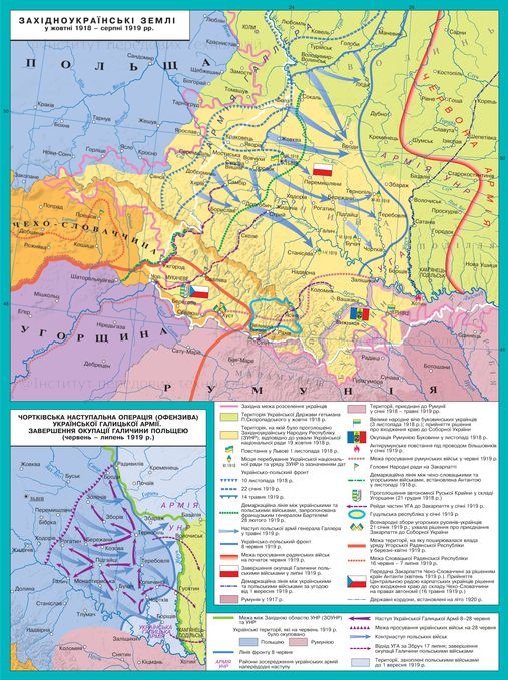 Becoming ZUNR a complicated international situation. Understanding  supported the revival of Poland, trying to turn it into cordon sanitaire between Western Europe and Bolshevik Russia. Poles with the assistance of the Allies, began to subordinate western lands. November 21, 1918 Polish troops occupied Lions. The government had originally moved to Ternopil, and in a month  to Stanislav (now Ivano-Frankivsk).

In December 1918 - January 1919 ZUNR forces fought grueling battles with  Poles, but none of the parties could not take the hill. In these circumstances government, trying to strengthen their position and realize the original aspiration of compatriots to unite Ukrainian lands within the same States sent a delegation to Kyiv. It was preceded by almost two months  troublesome preparation work of the Harmonization and unification of the UPR ZUNR. 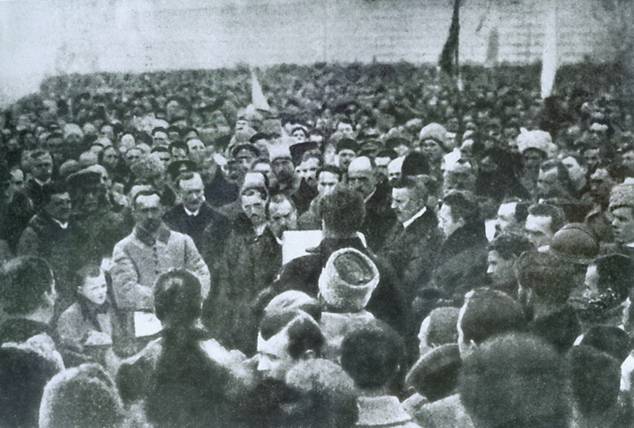 Proclamation Act of the Union

January 22, 1919 Directory UNR issued Universal merger Galicia  Bukovina, Hungary and Russia Dnieper Ukraine in one state - Ukrainian People's Republic. On the same day at St. Sophia Square in Kiev  was solemnly promulgated the Act of Unification, which carried out the dream of many Ukrainian generations of a sovereign united Ukraine.

But after martial law to implement the idea of

In January-February 1919, the Ukrainian armed groups launched active fighting for the liberation of the city from the Poles, who were taking him back to autumn of last year.

To this end Vovchuhivska was planned operation, which began in 1916 February 1919 after three days of Ukrainian city took in siege. For Poles critical situation. But the deal broke Entente. It sent a mission to the city for talks with Ukrainian government. The delegation began to demand from the Ukrainian and stop the offensive conclude a truce at the front. Guide ZUNR, speaking for the peaceful solution of the Polish-Ukrainian conflict, agreed to this. However, in Further, the mission became an ultimatum insisting on separation  Western lands so vacated to Poland 40% of the Eastern Galicia, including Lviv and Drogobychsko-Borislavskoe Oil Pool. Ukrainian side rejected these proposals and shameful resumed the offensive at the front. During the bloody battles Ukrainian Polish troops defeated near Vovchuhiv. However, develop their success they could not. Poles successfully used the truce, regrouped their forces and passed in counterattack. Exhausted by long  Ukrainian part of the battles aside, they release the Lions did not able. 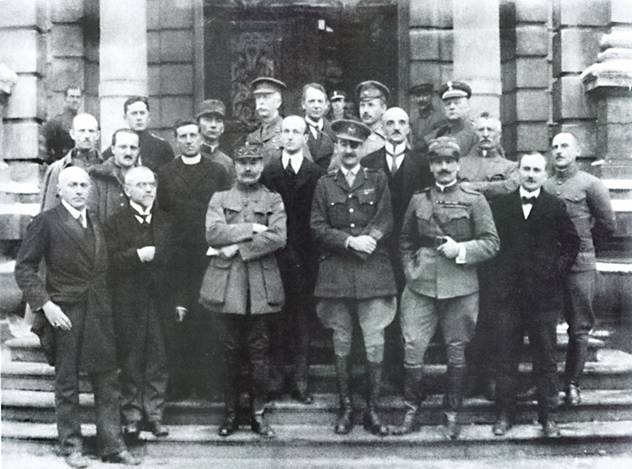 The interference Entente in the Polish-Ukrainian conflict only strengthened it. West-Ukrainian lands were the scene of further violent fighting.

In April of 1919 to Poland from France came well-armed army Gen. J. Haller, who accounted for 100 thousand people. It was designed for  struggle against the Bolsheviks, but the Polish government used it against Galician Army.

May 15 Poland began the offensive on all fronts. Ukrainian Galician Polish army gave way and retreated to the east. May 24 at the rear  Ukrainian soldiers attacked the Romanian army. They occupied Pokuttia with Kolomyi and Snyatyn. UGA found itself sandwiched next to Chertkova south-east of Galicia. At this critical moment President E. Petrushevich granted extraordinary rights dictator. He managed to bring  order in the troops and stop the anarchy. Galician Army conducted Chortkiv offensive and captured Ternopil, and then Ozhydovom and Belztsem. But the offensive fighting force reached last Galicians moreover, they constantly feel the lack of ammunition and weapons. UGA came to defense. The Poles were transferred to this area of

After the defeat of the Austro-Hungarian authorities in Bukovina belonged to newly created Ukrainian regional committee. Since November 1918 by his initiative was popular assembly of the people, where MPs adopted decision to connect the earth to the edge of the West Ukrainian National Republic.

President of the land was O. Polovych. However, Romania immediately reacted to these events and put its troops in Northern Bukovina. Subsequently command of occupation forces initiated the so-called General Congress, which consisted of Romanians. Congress declared union of Bukovina with Romania. The latter agreed to its Entente obtained the position and its full support. During the Romanian occupation  were all abolished the autonomous rights of Bukovina.

In January 1918 the Romanian expansion was the subject of Bessarabia. In November of that year under pressure from parliament invaders Bessarabian voted to join Romania. However, some Ukrainian MPs opposed this decision, but they were arrested for it  Romanian authorities and then shot. Violence occupiers caused among the Ukrainian population active protest. In January 1919  North of Bessarabia (in Hotynschyni) was an uprising against occupiers. The rebels, backed by the UPR, a few days completely liberated its land from the Romanian troops and installed power Khotyn Directory. But then Romania, pidtyahnuvshy significant forces defeated Ukrainian troops. About 4 thousand insurgents, along with 50 thousand refugees under the onslaught by enemy crossed the Dniester on the skirts.

After the collapse of the Austro-Hungarian majority of Ukrainian population Transcarpathia in favor of unification with the UPR. This decision was not accidental, because many Ukrainian public figures was closely connected with political life not only ZUNR but Dnieper Ukraine. Delegates from Transcarpathia participated in Ukrainian National Council and the Labor Congress in Kiev. In May Ukrainian public in 1919 created a central Transcarpathian Rus (Ukrainian) People's Council. But it could not withstand the pressure Mission of the United States, which required Transcarpathia merge with Czechoslovakia.

Thus, all attempts to defend the independence of Western lands within a unified Ukrainian state ended in defeat.