Theme 20. POLICY OF SOVIET GOVERNMENT IN UKRAINE IN 1919 (textbook)

1. Introduction of the Soviet state and its character

During the winter-spring 1919 in the territory of Ukraine (except Nadzbruchya) Bolsheviks and their power. January 6, 1919 decision Temporary worker-peasant government name of the state - Ukrainian The People's Republic, which was adopted by the Central Council, and the repeal was introduced new - Ukrainian Socialist Soviet Republic (SSR). Legal registration of the Ukrainian Soviet states held on 10 March 1919 with the adoption of the Third All-Ukrainian Congress of the Soviets first USSR Constitution. 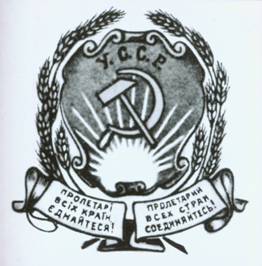 Emblem of the Soviet Ukraine. 1919 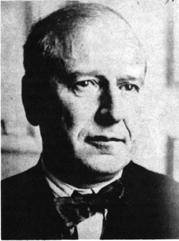 Christian G. Rakovski (Christie Stanchev)(1873-1941) - politician and statesman USSR. Born in Hradec (Bulgaria). With 15 years became a professional revolutionary. Years of study in High School, Faculty of Medicine, University of Geneva and was for years becoming one of the active workers and leaders of social democratic movement in Bulgaria and Romania move closer to Russia's leaders revolutionary movement of G. Plekhanov, L. Trotsky. V. Ulyanov (Lenin). In 1918 joined the ranks of the Bolshevik Party, he served as Chairman Supreme autonomous board established to fight against Odessa counter-revolution in Ukraine. Aided by Lenin and Trotsky carried L. number of important assignments in Ukraine in 1918: a diplomatic mission to Odessa, which signed the Russian-Romanian treaty (for which within 2 months Bessarabia was to be released), held talks with the government of Hetman Skoropadskiy established contacts with the Ukrainian opposition led by V. after. therefore it was proposed to head the government Soviet Ukraine. Carried away by the ideas of internationalism set question the existence of a separate Ukrainian nation. But then changed his views and began to advocate the expansion of political and economic SSR independence. In 1923 he criticized Stalin for national construction. After that was removed from the post of Government of USSR and sent first ambassador to England, and then - France. After returning to the Soviet Union was expelled from the ranks Communist Party, later repressed. Shot in Orel prison.

Simultaneously Sovnarcom there and party power. Her head - The Central Committee of the Bolshevik Party of Ukraine (TSKKP (b)). Typically, the government and party leadership were one and the same people.

Scope of internal policy of the Bolsheviks was to ruin Ukraine's existing economic system based on commodity-money relations and its replacement by direct barter. This Politics got in Russia called war communism and began introduced by the Bolsheviks in Ukraine since the end of 1918

It was an important part of the process of nationalizing the means of production in  industry and agriculture. The peasantry constituted at the time  approximately 80% of the population of Ukraine as the Soviet government was interested in  its support. Agrarian reform began with the confiscation of the landlords, autonomous, the monastery and church land. But not all of them passed and landless peasants malozemelnomu. Top black Bolshevik government transferred the newly created state farms and communes. Apart that the most productive land passed nationalized sugar plants and factory. The rest of the state has provided land to the peasants, but on condition  establishment of a large collective farms. Such a policy, as forcible seizure of food from villagers raised their dissatisfaction. 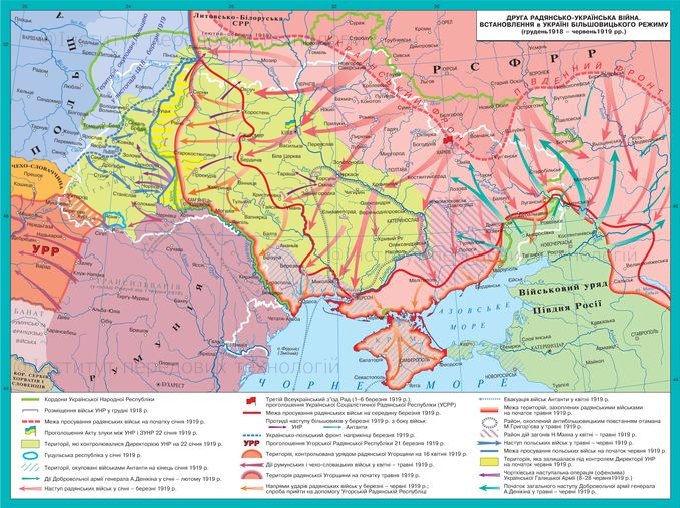 Economic policy of the Bolsheviks aimed at eliminating private ownership of the means of production, expropriation of grain, converting peasants  of poor in the labor force in spring 1919 sparked a wave of disaster anti-Soviet speeches led atamans Green, Struk Sokolovsky et al.

Grass-roots movement against the Bolshevik regime of the Soviets branded kulak banditry, directing punitive expedition against him, who carried out mass executions and burned villages. But such actions have more ruined agriculture. In April 1919 Bureau of the CEC Soviet Ukraine was forced to make a decision on the inadmissibility of burning villages during the suppression of the kulak uprisings.

But this decision is almost ignored punitive detachments. In response villagers launched a more active fight against the Soviets. Yes  when in April 1998 there were anti-Bolshevik speeches, in June-July, they numbered 328. Peasant revolt against Bolshevik regime covered almost all of Ukraine. 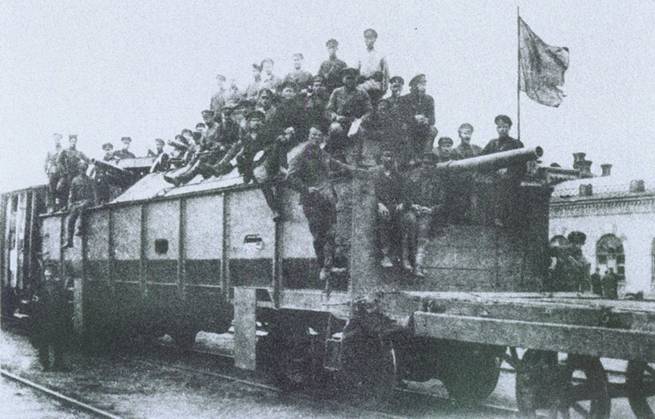 In early May, broke one of the largest in Ukraine Bolshevik uprisings led by the chieftain M. Grigoriev yevym. The basis of his  groups constituted the peasantry, which initially supported the Bolshevik government,  spryynyavshy her really popular. But after making sure that it is predatory towards them, the peasantry to rise Bolshevist uprising. Grigoriev issued a proclamation "to the Ukrainian  people ", urging people to destroy prodzahony and commissioners and  create a council without the Bolsheviks. The rebels captured Ekaterinoslav, Cherkasy, Aleksandrovsk, Kremenchug, Nikolaev, Kherson. Against them were sent the Red Army, who took the main force in ticks M. Grigoriev Kobelyaki near Poltava and defeated them. Ataman himself with small detachment retreated to the Kherson region. He tried to join with forces of another peasant chieftain N. Makhno. But between them occurred conflict, during which Grigoriev was killed. 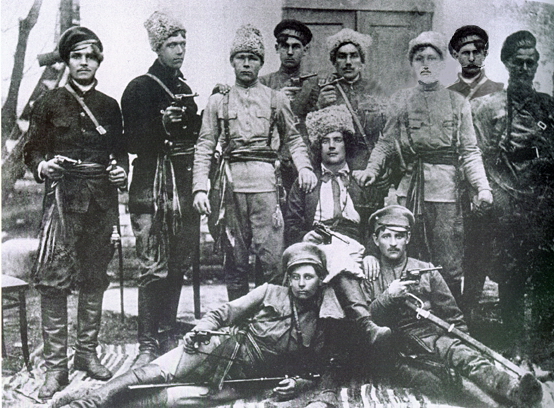 The Bolsheviks tried to subordinate the interests of its farmers, convert them into agricultural workers who will have become a pillar of Soviet power. Implementation of this intention Bolsheviks associated with the destruction of peasant militias. This was done balanced and consistent not only with respect to peasant detachments fought against the Soviets, but against those who joined the ranks Red Army. In particular, this potentially dangerous to the Bolsheviks, was the 3rd Brigade Zadniprovskyi deviziyi led by N. Makhno, who passed on the side of the Red Army and fought well with it against Denikinites. In June 1919 by decision of the worker-peasant members of the USSR Defense Makhno staff were arrested. Ataman, predicting further progress events as dangerous to himself, left the Red Army. With a detachment of the faithful  he number of people in 800 people. N. Makhno went on the Right Bank, where launch a campaign against the Bolsheviks. 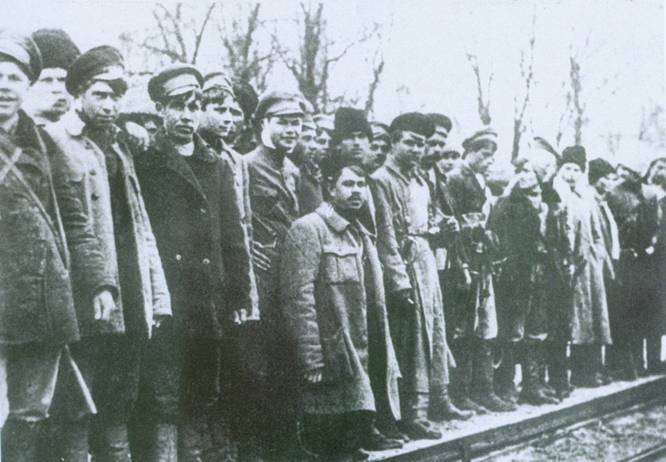 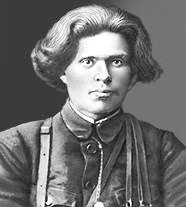 Nestor Ivanovich Makhno (Mihnenko) (1888-1934) rebel chieftain, one of the leaders of the anarchist movement. Born in peasant family in s.Hulyay Polje in Katerynoslav. Graduated two classes  elementary school. Worked for the landlords, then the worker. U1900-1908 he was - a member of Anarchists-Communists Union of poor farmers,  comprising participated in expropriation. In 1910 he was sentenced to  death, which was replaced by penal servitude for life. The February Revolution was bound. In 1917 he returned to the walk-Fields, where he started their own revolutionary transformation: distributed among peasants landed estates, formed armed squads.

Not recognized or the Provisional Government or UCR. In the summer of 1918 led peasants fighting against the Hetman regime and the occupiers., then against UNR Directory and Denikinites side of the Bolsheviks. Ideological was away Bolshevism and anarchism.

After the speech against the Soviet policy of war communism was Soviet authorities declared illegal. During the occupation of Denikin led an active struggle against Denikin in rear. In 1920 he was with the Bolsheviks actively in defeat Wrangel.

Upon completion of this operation began mass destruction his troops During the Soviet authorities in 1921 led the fight against the Red Army but in August was forced to emigrate. Lived in Romania, Poland, Germany, in Paris. In his last years was engaged in literary activities.

Otamanschina has become traditional for Ukrainian village. Central power at that time changed many times, and chieftaincy existed years. The villagers sought protection in atamans, not in government, which was far from them and constantly demanded bread, giving nothing in return. Chieftaincy was closer to the peasants. Ataman defended the peasantry, but it  supplied and maintained their reserves to fight Denikin regime. 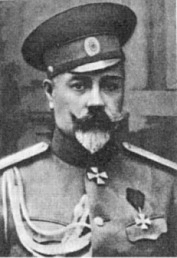 Spring-summer of 1919 Denikin's Volunteer Army A. invaded Ukraine.  Soviet power was eliminated. Denikin regime in Ukraine directed its efforts to protect the interests of landowners and businessmen. The new government, backed by military units began to take away from the peasants  divided by the landlords' land, obliging them to give landowners free of charge  third harvest 1919 in compensation for losses. In addition,  farmers had to support the Volunteer Army of taxes in half of 5 pounds of grain for each tenth of the earth. When late deposit volume grew at double tax. The enterprises were prohibited trade unions and strikes. The working day was determined in 9.5 hours but in terms of production needs of its administration could increase. 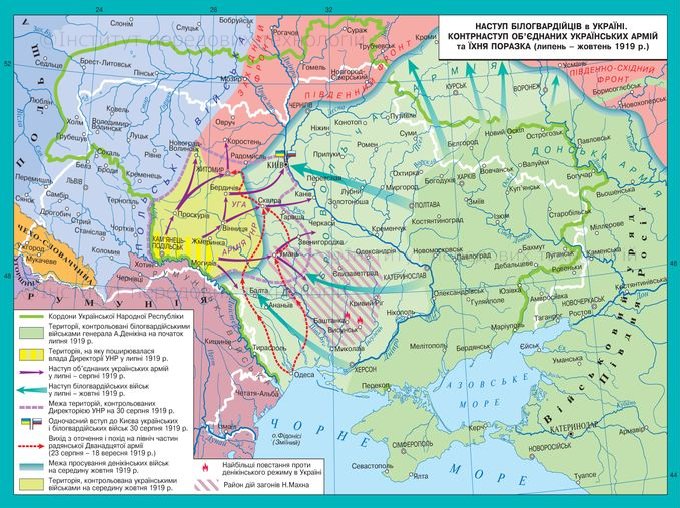 The attack by the Whites in Ukraine. Allied counter-offensive of the Ukrainian army and their defeat (July - October by 119)

Speaking for a single indivisible Russia, A. Denikin, refused in Ukrainian  establishment of its independent state. Mode negative attitude to any manifestation of Ukrainian national life. Administration issued  order the removal of portraits of Shevchenko in all institutions. Zemstvo forbidden to provide material assistance to Ukrainian schools, schools teach in Ukrainian subjects was abolished, was minimized activities of the Ukrainian Academy of Sciences. The government initiated and provoked national hatred. Special dimensions become Jewish Massacre that period denikinschyny Ukraine has committed more than 400.

Replacing the Bolshevik, Denikin regime made qualitative changes in the economic life of Ukrainian society. In some  areas it was even tougher than communism, particularly in international relations. Military dictatorship has weighed heavily on shoulders of working people. 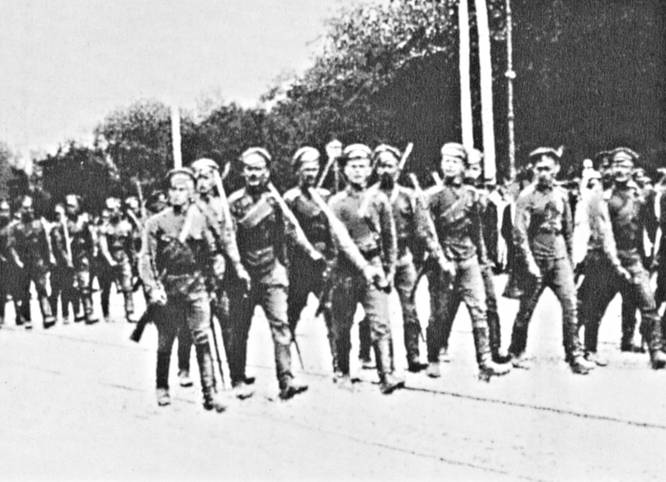 In spring 1919 offensive capabilities with the objective Whites reasons began to melt. First, this was due to increased insurgent  movement in Ukraine, in which suppression of A. Denikin was forced to withdraw Troops from the front. Second, the attack on Moscow Denikinites pitched front line for action to permanently increase the number of troops, and they lacked. Thirdly, held Whites increased mobilization of peasants army formally A. Denikin but also made her undisciplined, with many deserters. In addition, the peasantry at this point going down to support Bolsheviks, as their victory over the Denikin army eliminated the threat divided landlords losing ground. Almost every village had its troops self-defense, which gave Denikin rebuffed in their attempts to hold requisition bread and other products necessary to ensure UPR and the AFSR army.

In mid October 1919 the Red Army, creating a numerical advantage  over A. Denikin troops were able to move in a counter attack. Brunt of the Bolshevik leaders directed toward Kiev-Donbass-Rostov-on-Don. After some time the Soviet troops went on the offensive on all fronts. In particular, they broke the November 6 Denikinites from Chernigov, 12 December captured Kharkov, and December 16, 1919 he came to Kyiv. In late 1919 the initiative belonged to the Red Army and later Denikinites were completely ousted from the territory of Ukraine. 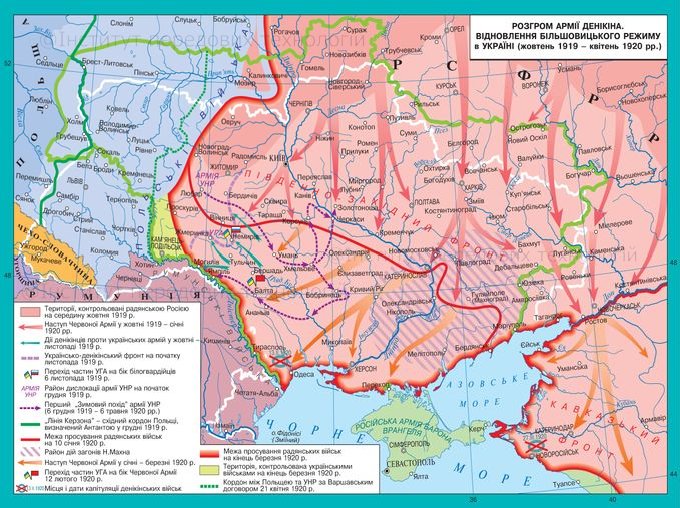 The defeat of Denikin's army. Restoration of the Bolshevik regime in Ukraine (October 1919 - 1920)

Bolshevik leaders are well aware of the need to seize power, it is easier than  keep. So the first day in office it created a system of penal authorities. It included: All Extraordinary Commission (VUNK) People's courts, revolutionary tribunals, police  et al. Its main component was VUNK, relied on her duties against counterrevolution. Her special units were attached, who played a crucial role in the fight against Ukrainian rebels.  This activity was accompanied by terrorist activities against the peasantry, destruction of hostages and political opponents of the Bolshevik regime.

So, in order to keep power in the hands of the Bolsheviks apply the policy of violence, which was called "Red Terror".

In turn, White Guards, including A. Denikin, as clearly used terror as one of the main activities of the administration. On the Ukrainian lands, which captured the Whites, acted laws to implement the uncompromising struggle against Bolshevism and guidance of the hard military methods dictatorship. For example, participation in the rebel movement, the Bolshevik organizations and desertion from the Volunteer Army zastosuvalas death penalty. Commonplace in mass executions. Thus, in Odessa without trial and investigation were persecuted to death about 3 thousand people. A similar situation  was in other cities.

So, in order to keep power in the hands of A. Denikin applied the policy of violence, which was called "white terror".

The victims of both red and white terror was the population of Ukraine, above all, ordinary people.