Religious Life in Ukraine at the beginning of the XXI century.

Long since the Ukrainian people confessed two forms of Christianity - Orthodoxy (from the tenth century.), and Greek Catholic (from the XVI century).. After years of the Ukrainian Greek Catholic Church has resumed its legitimate activities (1989). The vast majority of its supporters live in Western Ukraine. Greek-Catholic Metropolitan or Archbishop of Lviv and all Ukrainian "Pope approves.

Its main center is located in Moscow, in Ukraine, the UOC-MP is "Metropolitan of Kyiv and Ukraine. In 1992 he began work independent of Moscow, the Ukrainian Orthodox Church Kiev Patriarchate (UOC-KP).

The majority of the faithful living on the Right Bank and western Ukraine. Ukrainian National Association (UAOC) follows the tradition of Ukrainian Orthodoxy to its absorption Ruthenian Orthodox Church in the late XVII century. Unsuccessful attempts to revive Ukrainian autocephalous conducted in 1920-1930, 1941-1944 and in 1990 only UAOC could officially resume his activities. Its main branches also located in the right-bank and western regions.

Another form of Orthodox Old Believers are. His supporters distanced themselves from the official church even in XVII century. Ukraine has some Old Believers community. Traditionally, this doctrine followed the Russians.

to the Roman Catholic Church are mainly Poles, Hungarians living in Ukraine. However, there are many and Ukrainian Catholics. Catholicism has the greatest influence in Zhytomyr, Vinnytsia, Khmelnytsky and Ternopil regions.

Protestant doctrine began to spread in Ukraine in XVII century., en masse in the nineteenth century. Most influential of the Protestant Churches are the Union of Evangelical Christians-Baptists of Ukraine. Other common Protestant denominations is Pentecostalism, represented by several organizations, Adventism (Seventh Day Adventist Church) and reformatstvo. Protestant denominations include representatives of all social groups and all nationalities in many cities and villages of Ukraine.

Some professed doctrine in Ukraine only in specific nationalities. Thus, Lutheranism and the Germans followed by Latvians. Believers Armenians belong to the Armenian Apostolic Church. Judaism is the national religion of the Jews.

Ukrainian Muslims living in the Crimea and in big cities east and south. Islam professed by the Crimean Tatars, Tatars, Azerbaijanis, representatives of other nations, for whom Islam is a traditional religion.

Religious Life in Ukraine at the beginning of. 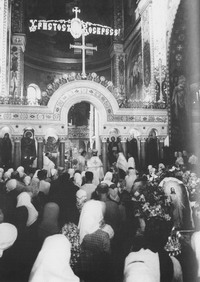 Worship in the Cathedral of Vladimir. Kyiv, 1958

Religious procession on the occasion of returning to the house the miraculous icon of the Mother of God. 1989 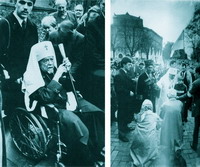 Chapter UAOC Patriarch Mstislav (Skrypnyk) in the capital of Ukraine. 1990 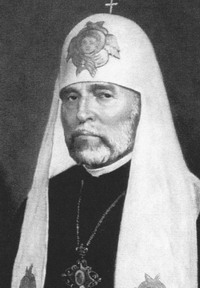 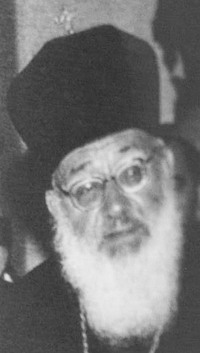 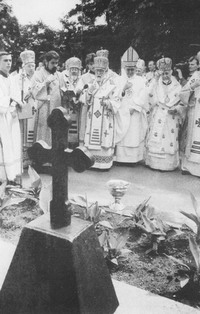 Blessing of the place where the temple will be built partiarshyy Church. Kyiv, 1993 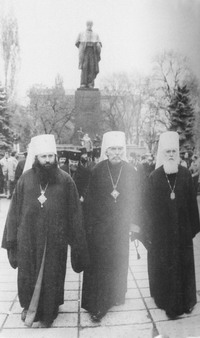 Bishop Anthony, Vladimir and Filaret (left to right) after laying flowers at the monument of Taras Shevchenko. Kyiv, 1993 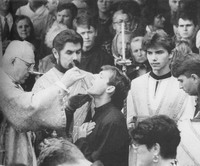 Liturgy at the monument to St. Volodymyr. Kyiv, 1993 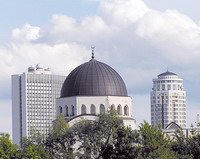 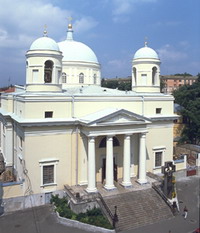 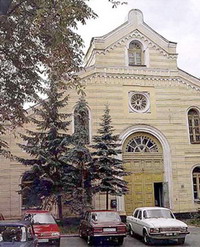