August 24, 1991 was approved Declaration of Independence of Ukraine on December 1, approved the Ukrainian people during the referendum. June 28, 1996 adopted the Constitution - the Fundamental Law of our country.

Ukraine is located in Eastern Europe. The territory of Ukraine has 24 oblasts and the Autonomous Republic of Crimea. The capital of Ukraine is in its best

town - trymilyonnyy Kyiv. Large cities with populations exceeding 1 million, are Kharkiv, Donetsk, Dnipropetrovsk, Odessa. In Ukraine, home to almost 48 million people, among them Ukrainian - over 37 million. Along with living in Ukraine Ukrainian Russians, Belarusians, Moldovans, Tatars, Bulgarians, Hungarians, Romanians, Poles, Jews, Armenians, Greeks and other nationalities. And together we - the Ukrainian people, Ukraine and the land - our motherland.

1. Due to regional centers of Ukraine Dnipro flows? 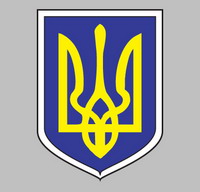 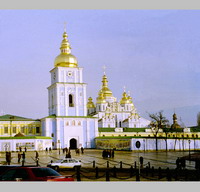 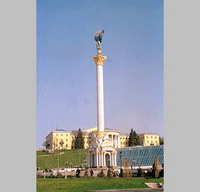 The Monument of Independence of Ukraine 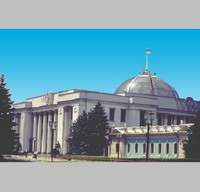