Ukrainian lands in the Austrian and Russian empires in the early nineteenth century.

Subdivisions in 50 years of the nineteenth century.

Top of the nineteenth century. as a result of three partitions of Poland, the Russian-Turkish wars, eliminating Hetman Zaporizhzhya Sich Ukrainian lands were ruled by the Russian and Austrian empires.

Russia owned Slobodian Left Bank, Right Bank and the South, which made up about 85% of the land inhabited by Ukrainian. In the Austrian Empire was located, approximately 15% of Ukrainian lands, namely, Eastern Galicia, northern Bukovina and Transcarpathia. The areas that were under Russian empire rule called Dnieper Ukraine, within the Austrian Empire - Western lands.

Subdivisions not take into account the ethnic composition of the population. On the left bank made 95% of Ukrainian population Slobozhanschine - 86% Right Bank - 85% South - 74%. Many Ukrainian inhabited Kuban, Don, of Voronezh, Kursk, Grodno, Mogylivs'ka and provinces of Bessarabia.

Administrative division of Ukrainian lands in the Russian Empire

Most numerous national minority in the Ukrainian lands were Jews. After the first partition of Poland, the Russian government introduced in 1791 for Jews "Pale of Settlement", beyond which the representatives of this minority to settle forbidden. Prohibition lasted till 1917 All Dnieper also Slobodian was part of the "Pale of Settlement." The event reaffirmed the Russian government implemented the policy of discrimination against people based on nationality. In addition Jews were forbidden to settle in Kiev, Nikolaev, Sevastopol, state and Cossack villages of Poltava. In many cities have created special Jewish quarter.

In the Austrian empire earth, inhabited by Ukrainian, belonged to different administrative units of the empire. Austrian authorities just ignored the ethnic composition of the population when performed administrative and territorial division. Thus, the eastern Galician land (where most were Ukrainian) and zahidnohalytski land (where the majority were Poles) are in a subdivision called 'Kingdom of Galicia and Ladomeriyi "with its capital in Lviv. In the representative body of the land safely tucked Polish nobility, though it was not decisive power of local government. Completeness of all administrative power concentrated in the hands of the governor, then governor, who appointed himself emperor. "Kingdom" was divided into 18 districts (district), of which 12 were Ukrainian part of the province. Another county in 1861 was part of Bukovina (also without the ethnic division, though in North Bukovina dominant Ukrainian population, and South - Romanian).

Transcarpathian Ukraine subordinated Pozhonskomu namisnytskomu management Hungarian Empire and was divided into four comitates. All power belongs to comitates administrators who were appointed from among the large landowners. Most of the country's population were peasants, Ruthenians, enslaved Hungarian landowners.

Administrative division of Ukrainian lands in the Austrian Empire

whole population Dnieper Ukraine was divided at birth sign of nobility, clergy, burghers and peasants. The vast majority of the population were peasants. Peasants were different. 40-45% of peasants were serfs. There were also state peasants, who were not personally addicted, were able to maintain its own facilities, giving a quarter of its profits as tax state.

lands in the West as the farmers were the majority population. Own national elite Ukrainian land actually had, it was polonizovana or rumunizovana. The only representative of the educated in Eastern Galicia and Transcarpathia was the Greek Catholic clergy and started on these lands national revival. In Bukovina resistance Rumanization played only nechyselna layer Orthodox priests.

So, at the turn of the XVIII-XIX. Ukrainian lands within the Russian and Austrian empires were in various conditions, and that resulted in differences in their development. The leading idea that in the nineteenth century. inspired by Ukrainian patriots, was awareness of belonging to one people, though broken, and half enslaved two empires.

the middle of the nineteenth century. ustalyvsya administrative-territorial division of Ukrainian lands, which lasted until the end of the First World War (1914-1918).

Ukrainian lands in the Austrian and Russian empires at the beginning of the XIX century. 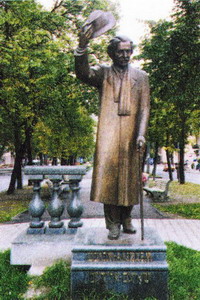 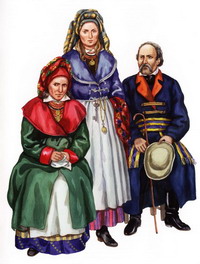 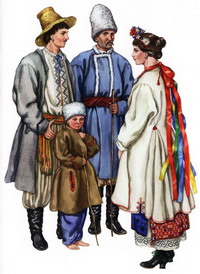 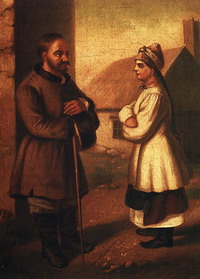 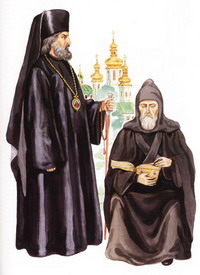