1848-1849 in Europe was hit by pan-democratic revolution. It was directed against the regime of reaction, which vstanovyvsya Empire after the defeat of Napoleon, against the remnants of feudalism. As a result of the revolution for the first time in history in the political life of Europe can participate broad masses. In some European countries began the formation of democratic institutions, civil society. Democratization of life, the rise of social movements has given impetus to the deployment of the national liberation struggle of oppressed peoples of Eastern and Central Europe.

During the revolution center of Ukrainian national movement was the Eastern Galicia. He started a group of representatives of the Greek Catholic clergy who appealed to the Austrian Emperor April 19, 1848 a petition. It expressed wishes: the introduction in schools and public institutions in Eastern Galicia the Ukrainian language, Ukrainian providing access to all positions, and equalize the rights of the clergy of all denominations.

May 2, 1848 in Ukraine was established the first Ukrainian political organization - the Supreme Ruthenian (Ukrainian) Council, which assumed the role of representative of the Ukrainian population of Galicia to the central government and performed it for years 1848-1851 Council, which consisted of 30 permanent members - the representatives of secular intellectuals, the higher and lower clergy led by Bishop Gregory Yakhimovich.

printed organ of the Supreme Ruthenian Council was "Dawn Galician - the first in Ukraine Ukrainian language newspaper that began publication on May 15, 1848

the initiative by HRR Galician Ukrainian national symbols were adopted flag and coat of arms depicting a golden lion on a blue background. HRR, advocating democratic reform, they demanded the provision of free national development of the Ukrainian population of Eastern Galicia. Implementation of the program they are associated with devotion to the Austrian constitutional monarchy. In cities, towns and villages of eastern Galicia orhanizuvalosya about 50 local councils Russians made up of elected representatives of various groups, mainly farmers, commoners, the secular intelligentsia (teachers), representatives of the lower clergy, who have been active socio-political, cultural and educational activities . It began the formation of self-defense groups - the National Guard.

Ruthenian Council have organized struggle of the Ukrainian population of Eastern Galicia to secede from the western (Polish) and transforming it into a separate province, that is, of national and territorial autonomy, the introduction of education in all educational institutions in their native language and so on.

As part of the struggle for democratic transformation was revival of cultural and educational movement in the province. In October 1848 in Lviv, the first congress of leaders of the Ukrainian culture and science. According to the decision of Congress was founded in Lviv "Galician-Ruthenian queen" - cultural and educational organization that has objectives of popular books for the people.

National Movement at Western 1848-1849 developed a broad program of national political and religious establishment of Ukrainians within the Austrian constitutional monarchy. In the summer of 1849 after defeating the combined forces of Austria and Russia, the Hungarian Revolution in the Habsburg absolutist regime was restored to its tsentralistsko-bureaucratic system. Austrian constitution was revoked. In the summer of 1851 Main Rus Council dissolved. Important were the social consequences of the Revolution 1848-1849 biennium Yes, serfdom was abolished, the peasants received complete personal freedom. Land, which farmers used over into their property. But the best land, community land (forests, pastures) remained in the hands of landlords. 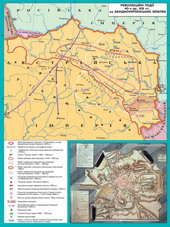 The revolutionary events of 1940's of the nineteenth century. at Western