Ukrainian culture of the second half of XIX century. despite all obstacles, continued to flourish. This was due to: firstly, the reform of 1860-1870's (the abolition of serfdom, the judiciary, regional, municipal, educational reform), and secondly, the rapid development of capitalist relations.

changes in education have already felt on the verge of 1860. Young intellectuals, students, grouped in the community, actively engaged in the creation of Sunday schools. In 1862, in Ukraine they operated more than 110. Teaching in many of them were built in the Ukrainian language, were published primers and textbooks, including "Primer" Shevchenko. But that same 1862 the tsarist government decided to close Sunday schools, and many of the organizers and teachers were arrested.

policy reforms carried out simultaneously with the policy tsarism repression of Ukrainian culture. This is known and testified Valuev Circular 1863, which hampered the development of Ukrainian culture. Only since the beginning of 1870 alive in Ukraine cultural and educational activities. At that time, significant support school education to become zemstvos. They increase appropriations for the maintenance and construction of schools. From 1871 through 1895 appropriations increased 6 times. New blow to the development of Ukrainian culture caused Ems decree Alexander II in 1876 but then do not disappear progressive trends in culture. In 1865 the initiative Pirogov Odessa founded Novorossiysk University. Thus the Ukrainian lands there were already five universities. Established as NIZHYN History and Philology Institute of Technology Kharkov, Kyiv Polytechnic, Ekaterynoslavsky Mining Institute.

some achievements in education was achieved in Western Ukraine: opened several universities, including University of Chernivtsi (1875), Lviv Polytechnic Institute and Academy of Veterinary Medicine, from 1869 zaprovadzhuvalos compulsory education of children aged 6 to 14 years.

new phenomenon was the emergence of public research organizations. At the Kiev University, research community: philological, mathematical, physical, medical, psychiatric, obstetric and gynecology, Society of Nature Historical Society Chronicler Nestor. In Western Ukraine in 1873 was established literary society named. Shevchenko, which in 1892 transformed into Scientific Society. Shevchenko (Shevchenko Scientific Society). The company there were three leading scientific sections - historical and philosophical, philological and mathematical-natural drug and a number of commissions, including archeographical, bibliography, ethnographic, legal, statistical and others. Outstanding contribution to strengthening the scientific potential of the company introduced Hrushevsky, who led his work from 1897 till 1913

research carried out mainly at universities. Outstanding contribution to the development of electrical magnetism did Pylchykov MD, who has long worked at Kharkov University. Beketov, head of chemistry at this university, first in the world has taught a course of physical chemistry. A talented biologist Mechnikov, working in Odessa University, created the doctrine of phagocytosis and protective properties of the body. 1886 Mechnikov and M. Gamal founded in Odessa, Russia's first and second in the world bacteriological station. In the second half of XIX century. a marked rise occurred in the humanities, especially history. Widespread recognition enjoyed works of Kostomarov, who dedicated a number of extensive research the history of Ukraine the period of "Ruins" and Hetman. Hard work on a study of historical records conducted by Mr. Antonovich, who is then studied history of Ukrainian Cossacks and haidamak movement. In the years 1880-1890 began active researchersappreciably increased activity of the young generation of historians - AY Efimenko, Bahalii DI, DI Yavornitskogo, MSGrushevsky. In the study of the Ukrainian language, literature, folklore fruitfully worked Zhytetsky PG. A number of important works on linguistics is OO Slavic languages.

in 1880 is flourishing Ukrainian theater. This was due to the fact that it is only in the theater was possible to develop the Ukrainian language. The best playwrights were also directors and managers leading theater company. Professional Ukrainian theater came at the amateur groups that operated in 1860-1870 years. In 1882 under the direction of Kropivnitskogo Elizabethgrad created the first Ukrainian professional troupe, to which were invited M. Sadowski, M. Zankovetska, A. Markov, I. Burlaka et al. In 1883 the troupe was headed Starytsky, and remained director M. Kropiwnicki. In Western Ukraine Ukrainian professional theater was established in 1864 under the name O. Bachynskyi "Ruska conversation.

In the musical art was distinguished by creativity SS Gulak-Artemovsky. In 1862, he created the first Ukrainian opera, "Cossack beyond the Danube.

In Ukrainian architecture of the second half of the XIX century. eclecticism extends a variety of styles. The most significant achievements in this period were more architects A. Beretta (Vladimir's Cathedral, home of the first school in Kiev), V. Schroeder (the opera house and theater Solovtsova in Kiev), P. Hlavka (house of residence in metropolitan Bukovina Chernivtsi) .

Thus, the second half of XIX century. was difficult and controversial period in the development of Ukrainian culture. Despite the difficulties, the culture was enriched by remarkable achievements in all major industries.

Ukrainian literature first modernist slogans put forward in 1901 the poet M. Blackie, who on the 'Literary and Scientific Bulletin "on the software open letter called back to the idea of" real sweet poetry ", content and genre enhance existing in literature of the time frame. Relay M. Voronoi adopted Galician writers group "Young muse" (P. Karmansky, V. Pachkovskyy, A. Lutsky et al.), Which in 1907 published its manifesto, which contained criticisms of realism in literature and focusing on common European patterns and trends.

late nineteenth century. - In the early twentieth century. Nouveau becoming more common in the Ukrainian architecture, which found its expression in geometrically precise lines of buildings, their dynamic form. This style is built railway station in Lviv, Kyiv, Zhmerinka, Kharkiv, Ukraine's first covered market (Bessarabsky). The brightest figures of architectural modernism were V. Zhukov, O. Verbitsky, M. Verovkin et al. Search and experiments architects-modernists sought to maximize the functionality of buildings, while retaining clarity in the lines of the facade.

Ukrainian sculpture early twentieth century. also did not avoid modernist beginnings. Under the influence of Western art schools formed a whole galaxy of Ukrainian sculptors-modernists - Gavrilko M., M. Parashchuk, V. Ischenko, P. Viytovych et al. Their creativity inherent contrast svitlotinovi effects and deep psychologism A. Archipenko enriched the language of twentieth century sculpture.: He made an empty space to be organic and very expressive element composition. Hand of the master are "treading woman, woman who zachisuyetsya" and other works.

supporters in painting modernist experimenters were M. Zuk, A. Nowakowski, W. and F. Krychevskys and others.

should be stressed that the Ukrainian version of modernism was quite original and has its own peculiarities. By virtue of the fact that the Ukrainian lands had their own state, had been separated and were actually in the status of provinces, social development, they have slow compared with the leading European countries, and hence conflicts between civilizations and cultures, the artist and society were not as sharp . These factors are identified and obscure, poorly expressed, immature nature of the Ukrainian modernism. Private World-ups only vidtinyaly general provincialism and deep traditional Ukrainian culture.

Ukrainian modernism not emerged as a national original current, and was detected only in the work of different artists. This style, especially in literature, Romanticism has undergone a significant impact, because of how tradition and mentality of the Ukrainian people, to which romanticism is an organic element in the outlook any day. The originality of the Ukrainian version of modernism lies in the fact that he was of the aesthetic phenomenon into a cultural-historical phenomenon, was an attempt to overcome provintsiynosti, druhoryadnosti, secondariness Ukrainian national culture, a form of attraction to mankind. It seems symbolized the transition of Ukrainian society from ethnographic consumer self-identification, ie the discrimination of self from others, to national self - determination of its place and role in the modern world.

The development of Ukrainian culture in the second half of the nineteenth century. 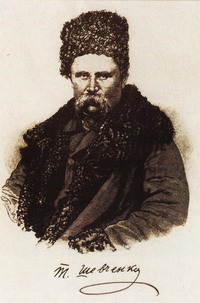 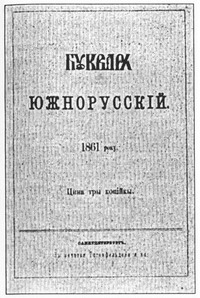 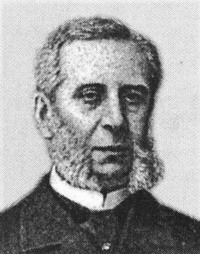 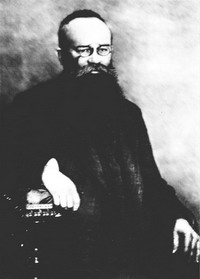 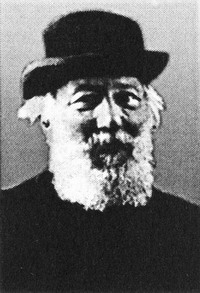 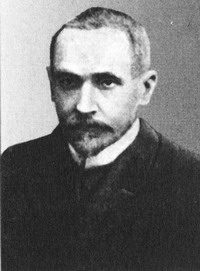 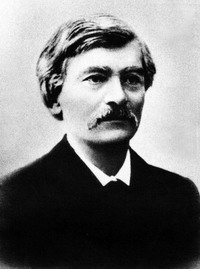 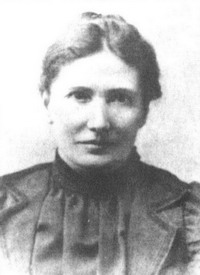 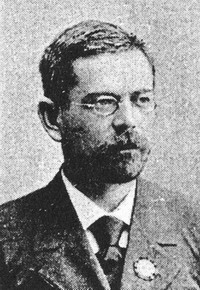 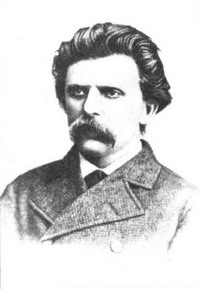 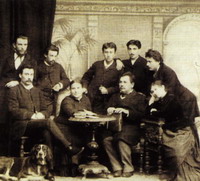 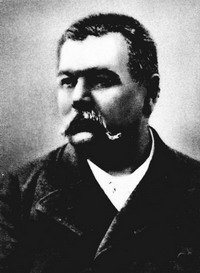 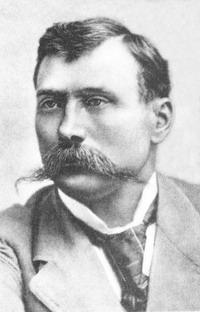 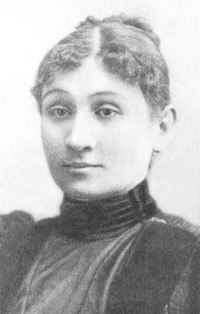 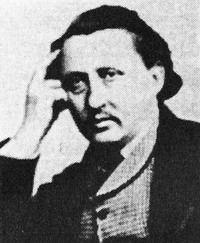 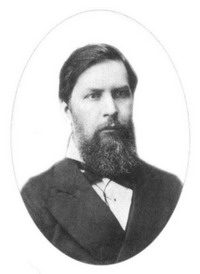 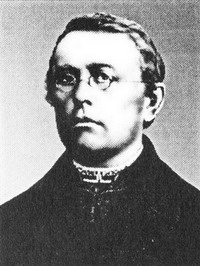 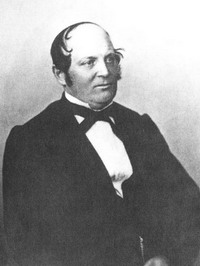 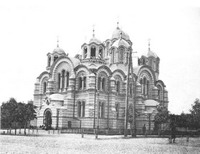 Vladimir cathedral. The end of the nineteenth century.

Opera House. The beginning of the twentieth century. 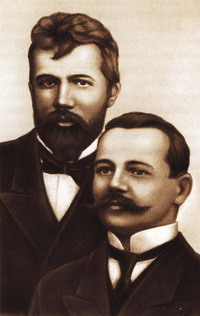 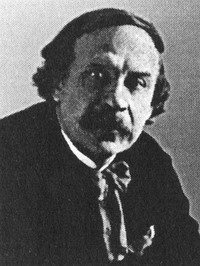 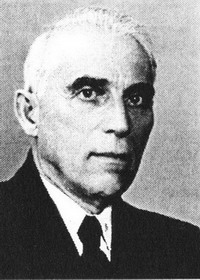 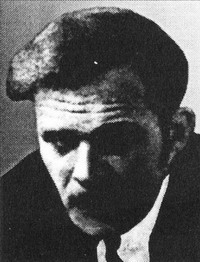 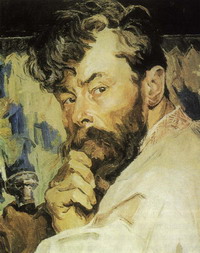 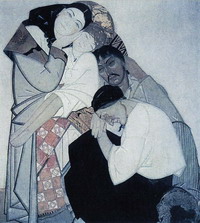