1. Inter-state conflicts in the Far East

Asia Pacific was a serious centerinterstate conflicts. The main rivals in the region by the U.S.,Britain and Japan.

The main issues that caused conflict between the specifiedStates were:

Thus, during Пershoyi World War II Japan, which took no activeparticipation in the war, using the fact that European states and the U.S. were employed inEuropean theater of combat operations, strengthened its position in the Far East,Pacific, especially in China. Increased and sea power, Japan, whichrelied on the Anglo-Japanese Agreement 1902

Japan's main opponent was the United States. They opposeddivision of China into zones of influence and demanded a policy of China underslogan of "open doors" and "equal opportunities". AlsoThe United States is concerned about growing sea power of Japan. Washington andTokyo did not exclude the possibility of military clashes.

Britain, in turn, insisted on maintainingprinciple of division of China into spheres of influence. Such position of the UK, and demandU.S. to pay all debts and sharpened the Anglo-American relations.

To address these issues was convened Washingtonconference.

Peaceagreements with Germany and its allies have been supplemented by a series of agreements signedAt the Washington Conference (November 12, 1921 - 6 February1922), devoted to the issue of sea of arms and relations inAsia-Pacific region.

OnConference three agreements were signed. Treaty of four countries (USA, England,Japan, France) ensured preservation of the participants are in possession of the Pacific BasinOcean. Parties give mutual guarantees of immunity for 10 coloniesyears. Under the agreement likvidovuvavsya Anglo-Japanese treaty in 1902Treaty of five states (Britain, USA, Japan, France, Italy) on the restrictionMarine weapons ustanovlyuvav proportions in the ratio of navalfleets 5:5:3:1,75:1,75 these states. Participants are not obligated to contractbuild battleships tonnage of over 35 thousand tons. Installed antonnage limitations for cruisers. It was forbidden to build new navalbasis (except U.S., UK) in the Pacific.

It wasfirst ever agreement on limiting arms race. The first UKformally recognized the equality of the Fleet with her.

6February 1922 was signed by nine of the treatise, which declaredprinciple of sovereignty and territorial integrity of China. Japan refused toits monopoly position in China and turned him former German colonies.

LargeStates have the obligation not to seek the division of China into spheres of influenceand adhere to the principles of "open doors" and "equalopportunities ".

The decision of the Paris and Washington conferences laidbasis Versailles-Washington system of postwar international relations. Itsprovide a way out of the war, made it possible to discharge the post-wartension and laid the foundation for the relative stability in internationalrelations in the 20-ies

Thesedecision contained several provisions that are certified by the understandingneed for changes in international relations? namely: the recognition of rightsdetermination of peoples? renunciation of war as a means of solving conflicts andetc.. An important precedent was the creation of the League of Nations. It was recognizedindependence of other European countries for which long fought their peoples.

Despite these achievements, the same system was strained, and herdecay led, eventually, to a new world war.

Weaknesssystem was due to the fact that its creators have put too many states andpeople in a position whereby they could not fight against suchsystem. Entente countries were not merciful winners. The entire burdenpost-war changes were imposed on defeated nations, although they have already droppedregimes involved in resolving the war. Terms of peace seemed moreunfair for these people, because their country does not capitulatedEntente countries. The war ended when none of the Entente soldiers did notset foot on German territory. 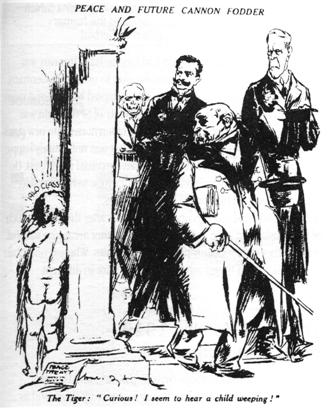 Installed reparations does not correspond to realcapabilities of the losers.

In these circumstances a wave of nationalism and chauvinism raisedWorld War I, not abated, now backed by a sense of its powernational humiliation. Not promoted weakening of nationalism and decisionrespect borders. Proclaiming the principle of self-determination as a basis fornational-state separation, the winners repeatedly violated histhemselves and zaplyuschuvaly eyes while others violated. In such a redistribution of boundaries inMany states have areas of compact residence of national minoritieswho got there in most cases out of their will. Germans - inCzechoslovakia, France, Belgium and Poland, Hungarians - in Czechoslovakia,Yugoslavia and Romania, Ukrainian - in Poland, Romania, Czechoslovakia, etc.. Count on the supportVersailles-Washington system of these people hardly ever.

Outside Russia remained Versailles system, which wassignificant destabilizing factor. For the Entente powers, Russia was primarilytraitor, who signed a separate peace with an enemy (the Brest peace March 31918). Moreover Bolshevism provoked hostility in the countries of the Entente thatled to intervention in Russia (1918-1922 biennium), and after its failure -to isolate Russia internationally. 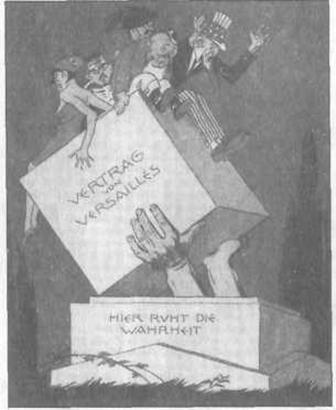 Another serious flawVersailles-Washington system  wereguarantee its preservation. New political leaders who came to power in the U.S., England,France and later, sought to distance themselves from their predecessors laidinjustice.

The first sign that the system is vulnerable, was the decisionU.S. Congress not ratyfiuvaty Versailles Treaty (in 1921 the United States concluded a separateagreement with Germany,that all vklyachav Main provisions of the VersaillesBut the Charter of the League of Nations). Simultaneously, the U.S. Congressannulled the Franco-American Treaty of Reciprocal Assistance. England, for exampleU.S. tAKOBut Alуed Anglo-Frenchcontract. In these conditions, France to maintain its dominance over Germany,went to an alliance of Eastern European States that were interested inmaintaining the Versailles system. Moreover, these states formed  "Cordon sanitaire" around USSRAs obstaclepenetration of communism in Europe.  Thus, in 1921 Фrantsiya has politicalpact and military convention with Poland. In 1920-1921 he зand support Фrantsiyi CzechoslovakiaRomania, YugoslavіI formed the Little Entente. A manner Фrantsiya, Poland and the Little Entente formed a union, whowhile preserving a guarantor of Versailles. But not onlong.

Article 1. States that agree to agree to limittheir weapons at sea in accordance with stipulated in this treatise ...

Article 5. Neither of the Contracting Parties shall not betrying to buy or build, or build, and allow to charge withinTerritory Construction of linear vessels of more than35 000 tons displacement.

Article 6. No linear ship any of the StatesContracting is not armed with guns of caliber greater than 16 inches (406millimeters) ...

Article 12. Except Liner, no militaryship of the Contracting Parties will have no gun larger than 8inches (203 millimeters).

1. Whyvstanovlyuvalos this is the ratio of the leading maritime fleetsworld?

2. At thatit was directed bargain "of the five?

Article 1. Other than China, the State Contractingagree:

Article 3. For most effective application of the principle"Open doors", ie equal opportunities in China for trade andindustry of all nations other than China, states agree, agreedthat they do not seek, nor support its citizens insearch:

a) agreements, which could promote in their favorany superiority of right to trade or economic developmentany particular area of China;

b) such monopolies or benefits that would helpcitizens of any other state law to carry out legitimate trade in China orfishing or opportunities to participate jointly with the Chinese government or with anylocal government in public enterprises or enterprises of every kind thatfor their tasks, activity or geographic position were calculated toparalizatsiyu on practical applicability of the principle of "equalopportunities ".

Established  thatregulations  prior to thisArticle  not be understood in the senseprohibition of acquisition of property or rights that are required to conduct a special kindcommercial, industrial or financial business or to encourageresearch and development.

China agrees to follow the principles laid down inforegoing provisions of this article, when considering applications for economicrights and benefits from governments or citizens of other States, regardless ofwhether they are parties to this treaty or not.

2. Whatimportance was the agreement for China?

1. ReasonWashington's aim was to convene the conference?

3.Expand the contents of the contract, which was first limited to the arms race.

4. Aswas decided at the conference issue of China?