Exactlythe word "fascism" - Italian origin (fascismo, from Lat.fascis - number of sticks). At first it was used on ItalianIndeed the 20-ies Later he started calling and similar movements in othercountries. German fascists called themselves "Nazis""Nation". 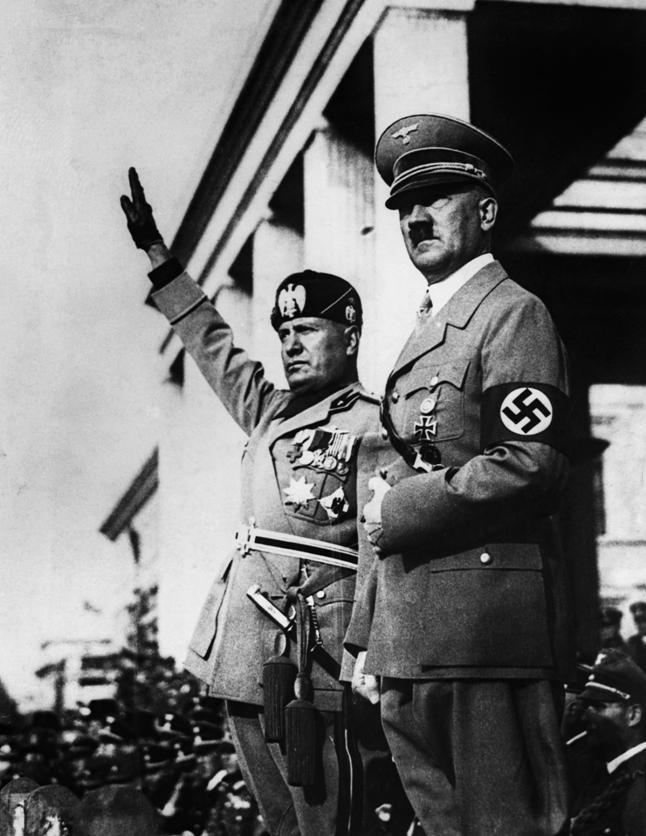 Fascismas a political movement has a number of traits that defined its specificity.

The first - a nationalism that passed in chauvinism andracism. For the Nazis were higher interests of the nation of individual, group,class. Latest certainly sacrificed first. Fascism as if absorbed ina whole wave of chauvinism and nationalism during the First World War. Besidesgreatest breadth of the movement in Germany and Italy poyasnyuvavsya insultnational feelings of the peoples of those countries that have completed their union laterfrom others and out of the First World War not only weakened, buthumiliated: Germany - terms of the Versailles Peace, Italy - bythat its interests neglected at the Paris Peace Conference.

For fascists democracy was synonymous with chaos, an alternativewhich they considered the order and discipline.

Zblyzhuvalo Nazi glorification of the traditional rightsState: and they saw those in it to focus the national spirit, the basisstability and order. Both those opposed any modernizationcalling for a return to the mechanical, roots, national shrines.

Butfascism and embraces the new features, inherent conservatism of the old right.The Nazis sought to put forward and implement in practice, not just the idea of a strongstate and a totalitarian state (from France. totalitaire - complete, whole)which absorbs the civil society. "Everything for the state, nothing againststate, nothing outside the state, "- these words convey Mussoliniessence of the fascist concept of the totalitarian state.

InGermany realization of this idea gave birth to fascism conflict with the church, whichwished to preserve their autonomy. Traditional law would not let suchconflict because of their commitment to the church. In addition, they were unlikenot numerous Nazi elite (family aristocrats, financiers and largeindustrialists). Fascism - a mass movement, which was attended by artisans,peasants, small traders and businessmen, officials, war veterans.

Uglyfeature of the Nazis was prone to violence, which they claimed were made ofhis cult. The violence they sought to build a new world order.Understanding violence as a necessary attribute of political struggle sporidnyuvalofascism with orthodox Socialists and Communists.

Borrowin a number of socialist slogans and ideas, fascism believed socialists and communistsmainly by their enemies. Anti-communist slogans promoted unificationItalian fascists and German Nazis and the Japanese war lords inAnti-Comintern Pact. Socialists are not taken for their "guilt"defeat in the First World War.

Indifferent countries of the fascist movement had its specific features. Asnationalists, his supporters have made no effort to develop a commonprogram.

InGerman fascism took extreme forms of nationalism. In Italian this is notwas. According to the German fascists, human history has been an eternal struggle forexistence of different races and nations. In this struggle stronger wins. Beatenmust die or surrender. The most viable nation they consideredNordic Aryan race, which belonged to himself. Its historical mission -gain world domination. The term "Aryan race" was introducedin the XIX century. to substantiate the theory of higher race of people. She picked up ideologuesNazism. They believed the Germans purest representatives of this race, whichzahartuvalas the harsh conditions of the north.

Spanishfascism - is largely a reaction to the revolutionary actions of the population andpenetration of communism. Its foundations were monarchism, clericalism andanti-communism and social basis - intellectuals, businessmen, industrialists,military. Unlike Germany and Italy, in Spain, fascism appeared not asconsequence of World War II, and late 20's - early 30's wheninfluence of the global economic crisis.

I. We demand the unification of all Germans in a Greater Germany onbased on the right of self-determination of peoples.

II. We demand equality of the German people with othernations, the abolition of the Versailles and St. Germain peace treaties.

III. We demand land and territory for our foodpeople and for the deposition of our population.

VII. We demand that the state has committedprimarily on income and food citizen. If you can not feed allpopulation, should be removed from the country representatives of other nations?

IX. All citizens should have equal rights and bear equalobligations.

H. first responsibility of every citizen should becreative work, mental or physical. The activity of the individual should notviolate the public interest and it must take place within the whole andbenefit to all. Therefore we demand:

XIII. We require all been socialized governmentalizationindustries (trusts).

XVI. We demand the creation of a healthy middle class?,immediate municipalization all major grocery stores and submit them torent cheap price small traders?

XVII. We demand land reform   that would meet the national requirements?,Terrier abolition of rent and prohibition of all speculation in land?

XX. ? We demand the education at the expense of the state especiallygifted children of poor parents, regardless of status and past profession.

XXV. For all of this we require aa strong state.

1.Name of the program NSDAP, which can be characterized as socialdemagogy.

From the speech by Adolf Hitler

Who sees in National Socialism only political movement thatdid not understand it. It is even more than religion, it will for a new humancreativity.  Without a biological basis andbiological policy objective now totally blind. I release people from aggravatinglimits of reason, from muddily and degrading himer called conscience andnravstvennist, from the requirements of freedom and personal independence,to be usable only a few.

2. What are human values, he denies?

3. What is the "biological basis" pohlaly natsisty in its policy?

"A characteristic of fascist methods of struggle isthat it is larger than any party, a learned and applied in practiceexperience of the Russian Revolution. If they are viewed from a formal point of view, ie itin terms of their political methods, it is the full application of the Bolsheviktactics and specifically Russian Bolshevism: in terms of rapid gathering of forces,"Uchrasprediv, mobilizations, etc. and destroy enemy Bezposhchadnogo whenappropriate and when it is caused by circumstances. Their main aim is the destructionarranging basic forces of the working class? "

1.      What are the common features of fascism and Bolshevism (Communism) indicatesBukharin?

2.      Why a similarity in methods between the Nazis andBolsheviks?.

1. ThatFascism is and what is its social base?

2. Whatcauses and spread of fascism?

4.Expand the features of German fascism.

7. Whyfascism was a threat to all mankind?

8. Some researchers believe the phenomenon of the twentieth century fascism. Prove orrefute this view.