§ 18. NEP. Proclamation of the USSR and the establishment of the Stalinist regime (textbook)

§ 18. NEP. Proclamation of the USSR and the establishment of the Stalinist regime

Political crisis in Russia in the early 20-iesasked about the possibility of further retention of power by the Bolsheviks.The policy of "military communism" led to mass peasantrevolts that swept the territory of Ukraine, Volga, Don and Kuban. Intensifiedbasmachiv movement in Turkestan.

The largest revolt was led by A. Antonov, involving theVoronezh and Tambov province. The number of participants was resistance50-70 thousand Antonov troops fought against the regular army, led byM. Tukhachevskyi. At the same time continued insurgent fighting in Ukraine underguidance N. Makhno. 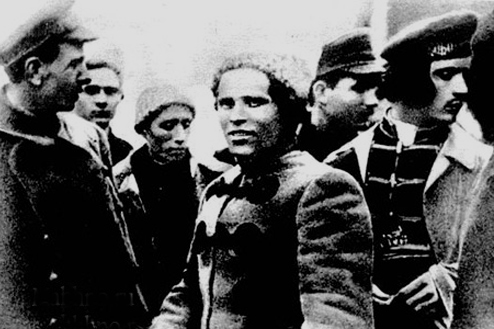 The most organized and dangerousKronstadt sailors revolt was the spring of 1921 by rebels, along with economicand political demands put forward: "For - Without the Communists. " Against the rebels were thrownregular army under the command of the same M. Tukhachevskyi. Lasted 10 daysstorming Kronstadt. 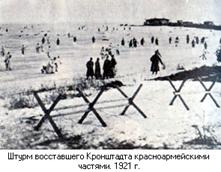 In some cities there were workers' strikes. Yes, the West-railroad, organized armed forces, captured and kept under controlalmost the entire territory of the Tyumen province, interrupting railwaySiberia to the center of the country.

NEP was to ensure the survival of the Bolshevik regime ininternational isolation and massive population performances.

According to industry was conducted decentralizationmanagement companies were cooperating in trusts and transferred to economiccalculation, some of the returning former owners, was implementedefficiency wage, rent dozvolyalas, involved foreign capital throughcreation of joint ventures and concessions.

Labeledmeasures contributed to the revival of market relations, in fact liquidated during the period"War Communism". For its normal functionintroduced a new system of taxation was introduced a new convertibleCurrency - chervonets secured gold. Equal to one guinea nyuvav10 gold ruble. Created better conditions for trade of allownership.

Butmajority of Bolshevik leaders considered temporary NEP policydesigned for a transition from capitalism to socialism, and were unwilling to give upof communist ideas. The main economic levers remain in his hands.Remained a significant public sector (most of the heavy and light industry)Foreign trade was a state monopoly, acted only state bank,formed state prices of agricultural and industrial products. In general policy infield of RCP (b) maintained full power.

This contradictory situation led to repeated crises Grain Procurementin 1925, 1927-1928. 1928-1929 biennium The reason for the refusal of their villagers to hand over breadat low prices.

The crises were accompanied by worsening political struggle in the partymanagement between a group of Bukharin, Rykov, Tomsk (supporters of conservation anddevelopment of the NEP) and the group of Stalin, Molotov, Kaganovich, Voroshilov. In thisStalin won the struggle group - fans of military-communistmethods of economic management, who took the course to withdraw from the NEP.

AlthoughNEP not a long term policy, because it was restoredeconomy, destroyed during the First World and the Civil War. Increasedindustrial and agricultural production, trade, and was heatedexchanges and weakened social napruzhennist.

2. Proclamation of the USSR

Set the communist regimes in most ofthe former Russian Empire put on the agenda the question of nationalthese newly created states with similar political system, connected onlynational economy and combined into a single military-political unionAgreements (1919-1920).

In the early 20-ies has inflamed debate about the forminterconnection-absorption of these states. Among the diversity of opinion can distinguish two approaches in solvingthis problem.

Yes, Commissar of Nationalities, Stalin put forward the ideaformation of Soviet unity on the basis of autonomy. That is allSoviet republics were to join the RSFRR as an autonomy. Suchvariant association took the name of "autonomy", but itscriticized the Ukrainian and Georgian Bolsheviks. In terms of the increasing conflict betweenMoscow Center and the national republics Bolsheviks intervened in debateLenin, who proposed the creation of Soviet unity on the basis of the federation (inunited federation of equal republics, and not subordinate to the RSFSR). Thisproposal approved by representatives of all republics.

During 1922 congresses held councils of UkraineBelarus, the Caucasus, the Russian Federation, which confirmed the necessityformation of a federal union of equal nations. In late December1922 Moscow hosted the national conferencerepublics, which approved the draft declaration on the establishment of the Union of SovietSocialist Republics and the draft Union treaty.

1 st Congress of Soviets of the USSR was held December 30, 1922 The mainspeaker was Joseph Stalin. He briefed the participants of the Congress with draft documentsproposed and approved. Opening the discussion, the representative of the USSRM. Frunze proposed to revise documents, and then we approve them2 nd Congress of the Soviets. Congress supported the proposal and formed a commission topreparing the final documents. The Congress was declared the USSRelected Central Executive Committee and the Presidium of the USSR, as well as fourCEC chairmen of the Presidium of the USSR, which had pocherezhno preside at meetings: fromRSFSR - Kalinin, of the USSR - Petrovsky, of BSSR - Cherv'yakov,from ZSFSR - Narimanov. 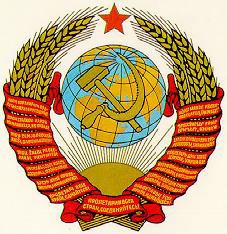 Emblem of the USSR

But the union contract never was finalized and signed."Commission 13" to finalizing the contract was eliminated. In January1923 CEC of the USSR created the Constitutional Commission that drafted theConstitution of the USSR. It was approved on 2 nd Congress of Soviets in January1924 The Constitution contained a Declaration and Treaty establishing the USSR, whichhad nothing to do with the draft treaty in 1922 Congress recommendedSoviet republics to ratify the Constitution, which was done. Soconstitutional design was the USSR, whose creation was announced CECUSSR in July 1923 in the "Address to the peoples and governments of the world."

So, thanks to Stalin's manipulation of union contract, which hadbecome an international agreement between sovereign states, has been replacedconstitution, which is the internal document.

Increase the number of unionrepublics in the USSR

3. Lenin and Stalin. Totalitariannature of the Stalinist regime

In May 1922 - March 1923health of Soviet leaders, the Bolshevik leader V. Ulyanov (Lenin) significantlydeteriorated. He suffered three strokes that led to the loss of physicalpossibility to fully operate. Due to illness he was fullyexcluded from political activity. However, in moments of social statushealth Lenin dictated several articles and letters to his colleagues -leaders of the Bolshevik Party. He gave an assessment of their personal qualities, pointing todangerous rivalry between Stalin and Trotsky to the unity and stability inparty. He proposed to remove Stalin from the party leadership andreorganize the state and party apparatus in such a way that itprovided the conditions for collective decisions.

In the last years of Lenin nespokoyilo prospects and issuesRussian socialist revolution. Pointing out that this revolution occurred incountries where it is not yet mature economic, social and cultural implications,Podeykuvav Lenin about the necessity of cultural revolutionwould eliminate "ignorance napivaziatske mass and opened the way tosocialist society. In economic policy, he insisted on maintainingNEP and imbued with the idea of a society "civilizedCooperators. "January 21, 1924 Lenin died. His death waspretext to intensify the fight for power, for leadership in the party, whichunfolded in the last years of his life.

The mainrivals in this struggle were Stalin and Trotsky. Even in 1923 inCPSU (b) took shape "left opposition led by Trotsky, which sharplycriticized the bureaucratization of the party apparatus and Stalin's attempts to focus allpowers in their hands.

Oldsupporters of Lenin, fearing dictatorial ambitions and aspirations of Trotskyusurp power, neglecting the very vlastolyubstvo Stalin, supported him instruggle. As a result, Trotsky was removed of public affairs, limitHainaut its influence in the party, and1929 removed from the country.

OnThis struggle for leadership is over. In 1925 took shape"The new opposition, led by Zinoviev and Kamenev. The opposition reliedin support of the Leningrad party organization. New OppositionStalin opposed the right to monopolize the interpretation of "LeninistHeritage, against the policy, which was held in agriculture. 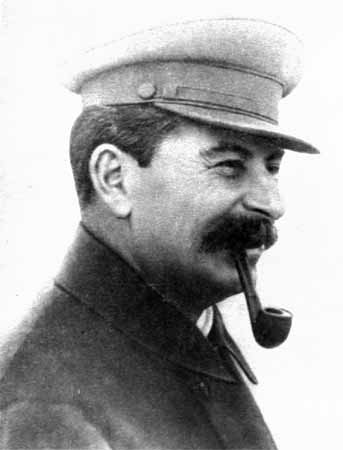 ButStalin had now concentrated in the hands of all the levers of party andgovernment, especially in recruitment. Opposition leaders wereremoved from the party and government, the Comintern leadership.

AttemptKamenev-Zinoviev group to 1926 revenge in the struggle for power successnot small. Last speech of opposition occurred in 1927 - "platform83 ". The main demands of the opposition was" politicalcovenant "Lenin. But time was up.

Table.: The struggle in the leadership of the BolshevikParty

1929was the year of Stalin's final victory in the fight against Lenin's associatesfor power.

He was a year of consolidation of the Stalinist totalitarianregime in the USSR.

Establishing the regime of personal power of Stalin in the USSRwere:

·   low political culture of the populationUSSR;

·   concentration of political power in the hands of oneparty;

·   low intellectual level of leadershipCPSU (b), limited its political culture;

·   low educational level and grassroots leadersordinary members of the CPSU (b);

·   sacred character of the mentality of society(Filling the religious content of public institutions);

·   numerous bureaucracy,whose welfare depended on the preservation of command-administrative system. 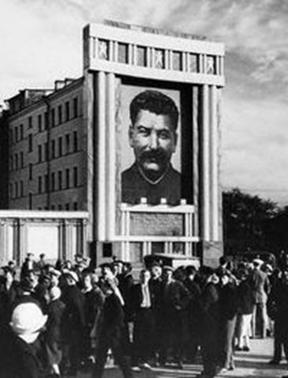 The mainby establishing and supporting the existence of this regime was a total controlover society and a constant terror to all its layers. Thus in the USSRas in some European countries consisted of a totalitarian regime. Governing andthe steering force of the Soviet totalitarian system was the Bolshevik Party,acknowledged that their ideology Marxism-Leninism. Reserve and assistant to the partyAll-Union Leninist Communist considered the Youth League - VLKSM. She wasentrusted to manage the daily operations of the All-Union Pioneer Organization(Children 10-15 years), and wife of the pioneer association createdSchoolchildren - pupils aged 7-9.

With the appeal of National CommanderAntonov militia to Red

Shot time of our liberation.

It's time to get rid of red autocrat,  who sat down,  like Nightingale-robber in Moscow White Stone, spohanyvshy our sanctuaryour icons with holy relics, shedding innocent blood sea of parents and brothersour, turning in? desert our very great state?

To save the homeland, to rescue from the hands of Moscow's Redbutchers I took over command popular militia in Tambov,   once collected Minin and PozharskyAddress people's ... Now in my possession 12000th army.

Here is my order:

In spite of  thatobstacles  immediately take on the march toconnection with my militia?

Do not listen to the commissioners, who will attempt to keep you inUkraine. They betray you and lose. Know that the Ukrainian prepare generalrebellion and you will consult with them. The people are very sly and cunning?

Motherland is in danger, she calls us to exploit?

1.Using the document, find out the causes of mass peasant rebelmovement against the Bolshevik regime in the 1920-1921 biennium

2.Give examples of massive anti-Bolshevik movement in 1920-1921 biennium

1. To ensure proper and peaceful conduct offarms based on letting farmers own an economic orderresources to strengthen the farm and raising hisproductivity, as well as to a precise definition of state obligationsrozverstka farmers as a way of storing the state of food and raw materialsfeed is replaced with a natural tax.

For what purpose were replaced prodrozverstku prodpodatkom?Compare the true purpose of the reasoning in the document.

The competence of the Union bodies in accordance withUnion treaty December 30, 1922

-          conclusion of treatiesjoining the Union of new members;

-          establish bases andgeneral plan of the entire national economy of the Union;

-          establishing a single budgetestablishment of monetary, currency and krydytnoyi system and system-Union, republican and local taxes;

-          installationsystem of weights and measures;

Art. 26. For each of the Federal Republicpreserve the right of free exit from the Union. "

What powers had allied bodiesaccording to the Union treaty?

2. WhatNEP activities were carried out in industry, trade and finance, inagriculture?

3. AsNEP treated in party leadership and the CPSU (b) in general?

4.Find out the results and impact of NEP. Is it justified expectations of the Soviet NEPleadership?

5. Whatreforms in government and party apparatus to carry out proposedLenin in his last works?

6.Find out how was the formation of the USSR.

9. Why and between whom there is an acute struggle for leadership inBolshevik Party after Lenin's removal from active politics?

10. What and when opposition groups emerged in the CPSU (b)?

11. What year is considered the year of establishment of the totalitarianregime in the USSR, and why?

1929 The promotion of Stalinist totalitarianregime in the USSR.