SubjectVI
The Central and Eastern Europe

Poleslosing independence due to three divisions end XVIII.Constantly fighting forrestoration of their statehood. During Пershoyi World War II formed two political camps,that in the struggle to restore Polish statehood hopes pinned on one of thewarring parties. The forces massed around the Party of People's Democracy(Endeky)? headed by R. Dmowski, relied on the support of the Entente. In Paris they Paul created the-skyNational Committee that his fall in 1917 was considered representativePolish people. In France was created Polish Army, whichled by General Haller. 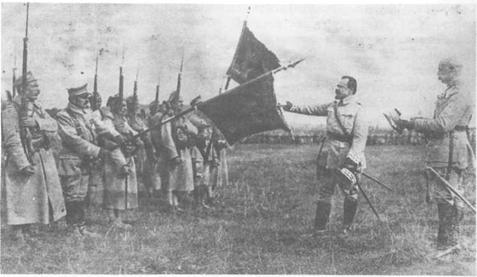 Revolutionaryevents in Russia, Germany and Austria-Hungary accelerated the formation ofPolish state. In November, 1918 leftist parties in Lublinformed a government headed by Ignacy Dashynskym, which proclaimed the establishment of the PolishRepublic. But this government lasted long. 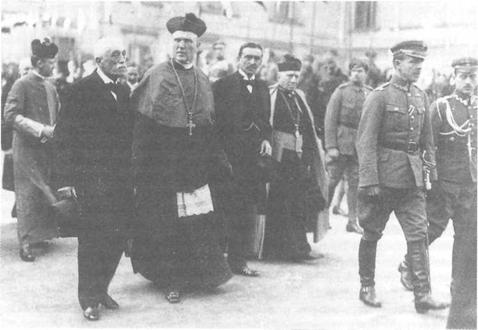 Members of the Regency Council

10November and returned to Warsaw Pilsudski released from prison. Nextday he received a unit Regency Council, established in September 1917 as a bodyPolish statehood, powers and immediately formed the government led byE. Morachevskym socialist and self proclaimed "interim leaderthe state. "Pilsudski transferring power regency self-destruct.At first the government, which is located in Warsaw, extended only toterritory of the Kingdom of Poland, which by decision of the Congress of Vienna1814-1815 he was a part of Russia, and Western Galicia (Little Poland).  Only at the end of December 1918as a result of popular insurrection was dismissed from the German authorities ofwestern Polish lands (Great Poland). Simultaneously with the process of recoveryindependence of the Kingdom of the Polish Council began to appear, but they had nosuch influence, as in Russia. 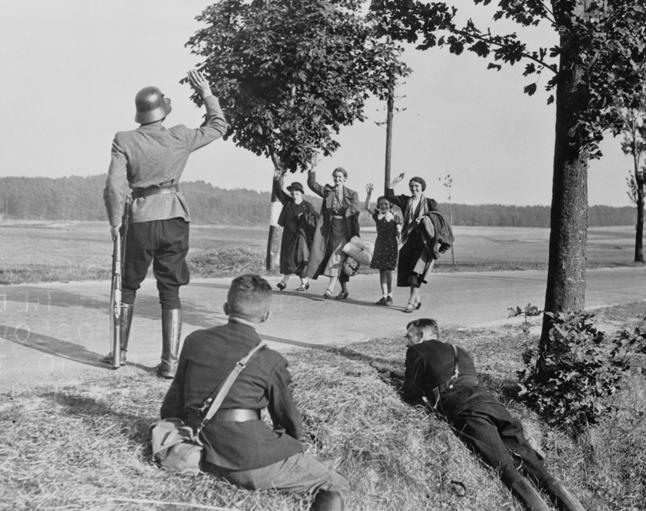 In January1919 held elections to the Constituent Diet, in which mostendeky won. Pilsudski remained "the leader of the state."  His role was limited to constitutionalnorms.

Summer1919 throughout Poland was eliminated council. 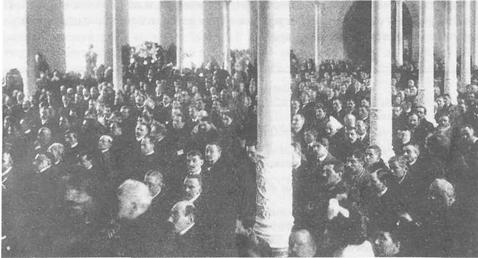 The first meeting of the Second Polish SejmCommonwealth (February 10 1919)

ParisPeace Conference has identified the western border of Poland, on the eastern borderquestion remained open. British Foreign Minister Curzonsuggested to define its line of resettlement of ethnic Poles, which wasEntente approved by parliament in December 1919 But uncertaintysituation in Russia has enabled the Polish government to claim landwhich once belonged to the Commonwealth. Claims on the eastern territoriesled to war with the West Ukrainian People's Republic - in ZUNRNovember 1918 - July 1919, as a result of which Polandseized Western Ukraine. 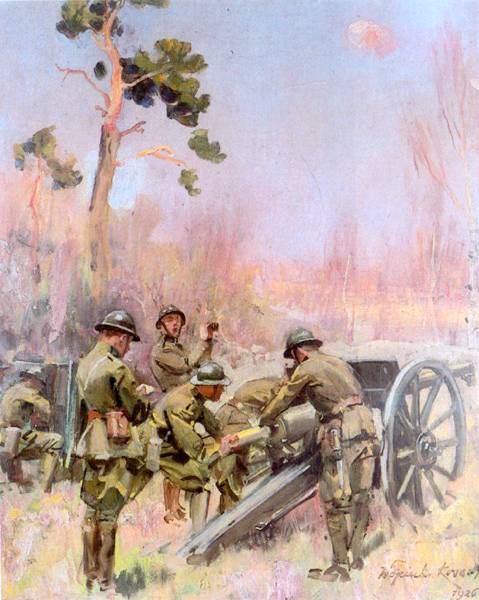 To1920 Poland was in a state of undeclared war with Soviet Russia.All attempts to induce the Entente Poland to more decisive action failed.This was due to the fact that representatives of the White movement in Russia did not recognizePolish state, and Polish government was not interested in their victory.Only after the defeat of the main forces Whites Pilsudski decided todecisive action. April 21, 1920 between the government and the Ukrainian National RepublicPoland, signed the Warsaw Pact. Poland reinforcing for a Westernregion of Ukraine. She acknowledged Ukraine's right to independent existence as states andsovereignty UPR led by Petliura. After contract and militaryConvention of the Polish army and troops of the UPR led offensive against the Bolsheviks andeven came to Kyiv. In May 1920 Their attack was stopped, andAugust Red Army was already under the walls of Warsaw. Soviet leadersviewed the trip to Warsaw as a way to push the world revolution, butwith the help of the Entente Bolshevik troops suffered retaliation. 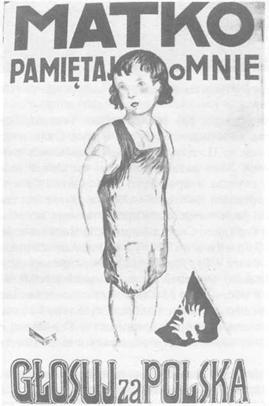 18March 1921 in Riga between Poland, and SSR RSFRR signed peaceagreement under which Poland by reinforcing a territory of Volhynia, Polesie,Holm, Galicia and other lands of the North-Western Ukraine, WesternBelarus. Frontiers of Poland established in 1923 In the east theyincluded in Western Ukraine and Western Belorussia, and Vilnaarea, seized in Lithuania in 1920 In western Poland was unable to connectWarmia and Mazury area where the population opposed to plebisciteaccession. In October, 1921 Poland was given a third of Silesia(During 1919-1921, he raised three Polish population here atarmed struggle). By decision of the Paris peace conference in Poland wasconnected parts of Pomerania and Prussia and Poznan. Due to territorialacquisition about 35% Population of Poland amounted tominorities in relation to which a policy polonization. Polandbecome a multinational state. According to its development mainly agrarian. 65%population employed in agriculture.

In1921 adopted Constitution of the Republic, in whichdeclared democratic rights of citizens. According to it became Polandparliamentary republic. Powers of the President elected palamentom 7 years, were limited.Zakriplyuvalosya caste Catholic Church.

InNovember 1922 the first parliamentary elections in which none of theparties did not meet the majority of votes. At that time there were about 200parties. Right party led by endekamy tried to form pravotsentryskucoalition government and elect their president. But when voting forpresidential candidate received a majority G. Narutovych, supportedLeft, tsyntrystskymy parties and representatives of national minorities.Pilsudski, who declined balatuvatysya for president, gaveNarutovychu all powers. Endeky But that did not want to acceptdefeat, staged a real May the newly elected president in the press. December 161922, two days after taking office, was shot Narutovychfanatical supporter endekiv. This led to a severe political crisis, which ofgreat difficulty managed to peacefully solve`яheading. The new president was elected the formerMember MSS S. Wojciechowski, government osformuvaly endeky.

The new government took in its policy rate to stimulate economicgrowth by providing cheap krydytiv. This policy Stimulatedeconomic life, but it was short-lived. No singledomestic market, the post-war devastation, economic blockade from Germany,nevryhulovanist trade relations with neighbors, returning krydytivled to rapid inflation and devaluation of the Polish brand (introduced in 1920City). Plummeting living standards, increased unemployment, a waveeconomic strikes in the industrial centers. Besides the Communists, stirredComintern, tried in Krakow (1923) uprising that was suppressed(Killed dozens of people).

Against the backdrop of economic crisis was a change of government that took decisivereforms. Affiliation Prime Minister Viktor Hrabskyy primary zavdannyavbelieved to finance stabilization. This was stopped printing devaluedbills. The Government appealed to wealthy citizens to share theirrevenues to balance the budget. In April 1924, there have been monetaryreform: Polish zloty introduced, established Polish bank - an independentfinancial institution whose shares were sold on the open market. The governmentactively took on agrarian reform, which parcelation (distribution) subject toestates over an area of 180 hectares (in the "eastern Kress - 300 ha). Parcelation hadlandowners held personally for two years, he received fromState full monetary compensation. Farmers instead of receiving statecheap loans for farming. Began railway construction,which was to tie the economic centers of the state with a new port - Gdynia, which began under constructionon the Baltic coast near Gdansk. Such measures are quickly madepositive.

The above mentioned circumstances show pro weak parliamentary republic. Defectsparliamentary system, a backward economic structure,uneven development, economic blockade of Germany and the USSR crisis in the army eventuallyled to a coup in 1926 and installation mode readjustment "(Recovery).

12May 1926 military under the command of PilsudskiWho decidedreturn to political life, launched attacks on Warsaw. In street fighting government troopsfailed. Coup largely supported by a population thathoping to improve life. PilsudskiThat used the authoritynational hero established the sole power. His rise to power coincided with the economicstabilization in the country, enabling the regime established a foothold.Threefold increased exports of coal, machine building industry was heatedindustry, increased transportation. Poland's economy has attractedBritish, American and German investments. Decreased unemployment, strengthenzloty exchange rate. In the village gathered good harvests. 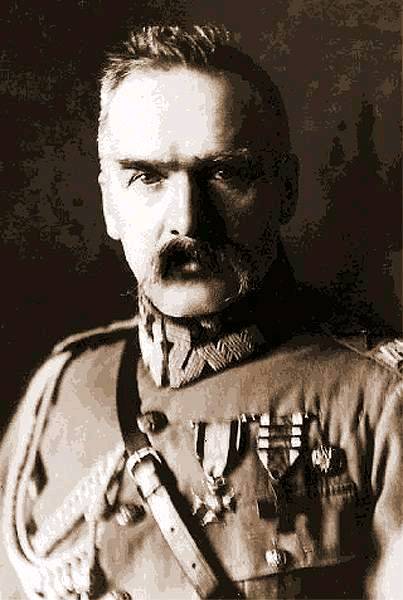 Mode"Rehabilitation" - the authoritarian regime led by Pilsudskiset in the crisis of the parliamentary system and the Polish state,based on the maneuvering among various political forces that would hinderopposition clearly organized. The authorities openly disregard the Senate and the Sejm, givingtemporary success in economics for his services.

1.      J. Pilsudski dominant influence in political life, althoughHe formally was only war minister. The formation of his "personality cult".

2.      A significant influence in the political life of society the military,J. Pilsudski especially fellow soldiers.

3.      The existence of the parliamentary opposition.

Economiccrisis of 1929-1933, led to the evolution of the regime right. To keep thepower, Pilsudski began reprisals against their opponents and restricted the rightsParliament. In 1935, adopted a new constitution that strengthened regimepersonal power. 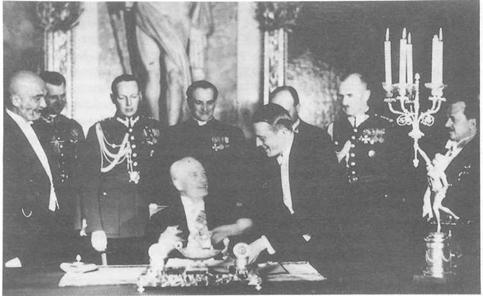 Signing of the Constitution of April 1935

InMay 1935 Pilsudski died. After his death, fighting broke outbetween the inspector-general of the armed forces, General E.Rydz-Smihly and PresidentI. Mostsytskym, which culminated in a compromise and division of power.

Period1935-1939 biennium in the internal condition was relatively stable. Major developmentsassociated with Poland, developed on the international scene.

Onearly 30 years, Poland went to the rapprochement with Germany and signed with her in 1934, the non-aggression pact. Thus, Poland rejected the treatycollective security between France, Czechoslovakia and the USSR.

In 1938Poland took part in the division of Czechoslovakia. Such a myopic policyled to the loss of real ally. In autumn 1938 Germany proposedPoland to agree to join the German city of Danzig. Poland refused.Between the two countries became very quickly increase the conflict. September 1, 1939Germany carried out aggression against Poland. World War II began.

LeadersRepublic of Poland during its creation laid the dangerous potentialself-destruction, ethnic zaharbavshy nepolski territory and encouraging them topolicy of colonization. It certainly entailed resistance nepolskoho population (OUNin Ukrainian lands) and gave an opportunity to neighboring states to put forwardterritorial claims and to support separatist movements.

Article 1.Both Contracting Parties shall, declare a state of war between them abandoned.

Article 2.Both Contracting Parties shall, in accordance with the principle of self-recognize the independence of Ukraine and Belarus  and to agree and adopt,  that Poland's eastern border,  ieborder between Russia,  Belarus andUkraine, on the one hand, and Poland, on the other line is (the description givenline)?

Article 3.Russia and Ukraine waive any rights and claims to landlocated west of this border?

Article 5.Both Contracting Parties mutually guarantee full respect of statesovereignty of the other Party and to refrain from any interference in its internalcase, including from campaigning, advocacy and any interventions orSupport?

Article 7.Poland attaches to persons of Russian, Ukrainian and Belarusian ethnicity,  located in Poland onbasis of equality of nationalities, all rights of freedevelopment of culture, language and performing religious rites. Both Russia and Ukraineprovide persons of Polish nationality,   located in Russia,  Ukraineand Belarus  the same rights?

Article 24.Diplomatic relations between the Contracting Parties shall be established immediatelyafter ratification of the agreement.

1. Whatwere territorial acquisitions in Poland under this agreement?

Constitution of the Republic of Poland. March 17, 1921

Section II of the Netherlands.

Art. 2. Higher power in the Republic of Poland for the people.

Art. 10. The right of legislative initiative belongs to the government andDiet.

Art. 12. The right to vote has every Polish citizen withoutsex difference,   which was filled for the dayelections for 21 years.

Art. 35. Every draft law passed the Diet, passedto the Senate.

Art. 39. President elected for seven yearsabsolute majority of the Sejm and Senate, which merged into the National Assembly.

Art. 44. Each Government Act requires the President of the RepublicSignature Prime Minister and relevant ministers who, by signing the certificate,take responsibility for it themselves.

Art. 95. Polish Republic guarantees on its territoryfull protection of life, liberty and property of all, without distinction of origin,nationality, language, race or religion.

CanConstitution of the Republic described as democratic?

1. Ascircumstances occurred restore Polish statehood? Give historicalassessment of this phenomenon.

3. WhatPilsudski's role in establishing the Republic of Poland?

4.Find out the process of forming the borders of the Polish Republic.

5. Whatnegative features were laid during the development of Poland?

.Describe treatment "rehabilitation". What are its main features. Has he"Recovery" for the country?

1934  - Non-Aggression Pact between Germany and Poland.