U.S. and Latin America in the interwar period. State of the aggressor and the reallocation of Peace on the eve of the Second World War (compendium)

First World War affected the American continent. The U.S. army took part in combat operations only in summer and autumn of 1918 the loss of U.S. compared with other countries were much lower: about 120 killed and thousands died from disease and 230 thousand injured.

industrial growth has increased the U.S. share in world industrial production. Until 1920, the share of the United States accounted for almost half the world's coal, 3 / 5 of iron and steel, 2 / 3 of the extracted oil in the world, 85% of automobile production.

So the U.S. at that time was economically most powerful country in the world.

United States have significantly increased capital exports. Whose main form of the loan were military. Their total amount in the early 20's he has reached 11 billion dollars. Besides the years of war has increased more than twice the amount of U.S. private investment abroad. So the U.S. turned from a debtor to the world's largest creditor.

increase the share of dollars in international economic relations has created the preconditions for more active invasion of the United States in the sphere of world politics. Government of the Democratic party headed by President Woodrow Wilson in 1917 took a course to gain "global leadership". After the war, during the Paris peace conference, Mr. Wilson tried to secure the new status of the U.S., but the decision of the Paris Peace Conference were not like that his administration hoped. In most U.S. isolationist sentiment rose. Finally, defeated in the diplomatic game in Europe, the U.S. 20-30-ies the main edge of the geopolitics directed to Latin America and Asia Pacific.

But against the backdrop of the economic boom of 20 years and observed some disturbing trends. Shipbuilding, railroad equipment manufacturing, textile and coal mining industry fell into decay. Production capacity in engineering and metallurgy were not fully loaded. Agriculture experienced a prolonged crisis. In the country there were 2-3 million unemployed. Every year, increased sales on credit, at the expense of future income, testified to the narrowing of the internal market and worsening problems of distribution.

This was explained by uneven distribution of national wealth. Wages barely increased, while income grew three times larger businesses. The rich have become richer. They bought expensive cars, houses, yachts, but they were few and they could not replace the mass market in a rapid development of mass production.

was unstable and financial system. In the 20 years on the New York Stock Exchange - the largest in the world - there was a real boom caused unprecedented increases in stocks. It is attracted to the securities market significant financial resources. All sought to buy shares only to then sell them. When this speculative boom has reached the maximum point, the shares started to collapse and then the crisis.

crash on the New York Stock Exchange October 29, 1929 ("Black Tuesday") announced the launch of unparalleled depth and destructive economic crisis. For one day total decline in the price of shares was 10 billion dollars. By the summer of 1932, industrial production declined in the U.S. almost doubled against 1929 Thousands of banks, industrial and trading companies went bankrupt. But large corporations, which absorbed many small and medium sized firms, with the help of government abstained.

turned mass movement of unemployed, who organized two "hunger marches" on Washington. They demanded of the work, the introduction of social insurance and unemployment benefits issue, the suspension of the exemptions, saving the workers wages, the recognition of the right to organize unions. Unemployment first time in history has reached astronomical figures - 17 million people.

Republican administration of President Hoover was helpless in this situation.

Attempting to exit from the crisis to alleviate social tension in society, which further proved the beginning of serious reform of American society, was the policy of President Franklin Roosevelt in the 1933-1939 biennium She entered the history as the "new course. Thanks to reforms in banking, labor, agriculture, the introduction of state regulation of economic and social processes could bring the U.S. a deep crisis.

Since the late 30's F. Roosevelt administration was to pursue a more active foreign policy. This was due to the fact that the aggressive state of Germany, Italy and especially Japan were to threaten U.S. economic interests.

features of the development of Latin America

Latin America lies to the south of the border between the U.S. and Mexico. The name of this region of the world got through domination of Spanish and Portuguese, established on the basis of the ancient Latin language.

In Latin American countries that gained independence in the first half of the nineteenth century., formed a kind of political relations, largely inherited from the colonial period.

Prominent position in political life sat descendants of Spanish and Portuguese nobility-colonialists who used the work of landless peasants (mostly Indians and blacks).

Dominion latyfundiy determined predominantly agricultural character of the Latin American countries. It certainly put them in dependence on industrialized countries - first Britain, then - as Germany and the U.S., which provided the Latin American countries in industrial goods, capital and were the main markets for their products. Agriculture monocropping of little character. In Argentina dominated the production of meat and grain in Brazil and Colombia - coffee, Cuba - sugar and tobacco, in the Central America countries - Tropical fruits (this rationale to be called the last "banana republic ").

combination of political sovereignty and economic dependence became an important feature of the region.

First World War are not directly touched by the countries of Latin America, but for their development had significant implications. Increased consumption of agricultural products and raw materials in the Warring States led to increased prices for these products. This increased income Latin American countries that have been used for industrial development. In countries formed national capital and the working class. So to unresolved agrarian question joined the problem? characteristic of industrialized countries. The war also led to the collapse of European capital, which immediately benefited from the U.S.. After opening in 1914 the Panama Canal, which became the property of the U.S., increased political weight and influence of the United States.

In 20-30's in Latin America has become a popular slogan of strengthening national independence and the effects of other states. This prompted the governments of some countries to undertake reforms. The most radical reform in the first quarter of the twentieth century. was conducted in Argentina and Mexico.

Yes, in Argentina President Irihoyyen Ippolito (1916-1927 biennium) allowed trade unions, introduced the 8-hour day and two weeks paid vacation. There were land reform, under which farmers from the state fund peredavalos 8 million hectares of land and defended the right tenants.

result of a revolution in Mexico 1910-1917 biennium to power dostupylasya new political elite. May 1, 1917 there took one of the most democratic constitutions at that time. It is reinforcing for the nation the right to land and its mineral wealth, obligated to return all the villagers are caught in these lands and provide them with land from the state fund. In addition, each state set the maximum tenure as surplus and distributed between vykupovuvalys peasants. The Constitution recognized the rights of trade unions, has endorsed the 8-hour workday. Primary education was compulsory and free. Mexico proclaimed democratic presidential federal republic.

economic crisis of 1929-1932 he was hit hard the economies of Latin American countries. Vpaly revenues from exports. In stores accumulated a significant number of agricultural products that had to destroy, to somehow keep the price of a sharp fall. This crisis has shown all the dangers of economic dependency preservation. Started the new rising anti-imperialist movement (largely anti-American and anti-English), which led to a convergence of Latin American countries with Germany and Italy.

Latin American countries committed themselves to industrialization, which had, in their opinion, the inability to compensate for import of machinery and equipment from industrialized countries. To develop their own local capital industry provided all sorts of benefits. Attempts to change the structure of exports to reduce its dependence on only one type of product. Installed control over the activities of foreign capital. In Argentina, Mexico, Bolivia, nationalized the oil industry.

Thus, in Latin America as in Western countries, the crisis led to increased state regulation of economy. But the form of changes were different. In Brazil, the initiative for reform, the president Zhetulio Vargas (1930-1945 biennium). He established a regime of personal power, and the first years of his administration sympathized with fascism around trying to be like Mussolini, but the war changed the views and sent to fight on the side of anti-Hitler coalition 30000th Corps who participated in combat operations in Italy.

most profound transformation undertaken in Mexico Lazarte President Cardenas (1934-1940 biennium). During his reign was ended with the rule latyfundiy, nationalized railroads and the oil industry became established democracies.

Along with solving economic problems for countries in Latin America was the important issue of stability and power and the development of democratic institutions. For 20-30's was characterized by political instability, almost continuous wave of military coups, riots, civil wars. Military dictatorship on the one hand have become a means of struggle against the old elite, connected with latyfundiyamy, on the other - way to suppress the population of social performances. The most negative fame became dictators in Central America (Somoza in Nicaragua, Batista in Cuba, etc.).. The only country that avoided a dictatorship, was Mexico.

Since the late nineteenth century. especially after the Spanish-American War, 1898, for Latin American countries used the U.S. policy of "big stick", "gunboat diplomacy" and "dollar diplomacy." Almost all Latin American countries felt the presence of U.S. troops. In some countries, political life completely revolved around the representation of some powerful American company. Yes, "Yunayt fruts" completely dominated in Central America. Cuba and Puerto Rico U.S. general in fact turned to their colonies.

Strengthening anti-Western, especially anti-American, sentiments forced to adjust U.S. policy in Latin America. President Roosevelt declared that the United States will pursue a policy of "good neighbor" and not carry out an intervention. USA began to rely on the Inter-American development cooperation based on equality. Important in this area was a Pan American congresses and conferences. This policy has contributed to reducing the influence of Germany and Italy created the preconditions for participation in the region during World War II on the side of anti-Hitler coalition (19 countries in the region have declared war on Japan, Italy, Germany and joined the United Nations). Really took part in the war of Brazil and Mexico.

Countries of Latin America rarely fought each other. In the interwar period most serious conflict between vyruvav Bolivia and Paraguay, entered history as Chakska War (1932-1935 biennium). The conflict between the two poorest countries in the region was caused by nevyznachynostyu unsettled border area of the Gran Chaco. The impetus for the opposition have found oil here. Also Bolivia, previously lost out to the Pacific Ocean, hoping to gain a port on the Paran peace treaty was assigned to Paraguay.

Another area was a troubled region, where the borders of Peru, Ecuador and Colombia. The desire to control these areas of greater hash unsettled relations between the neighbors until the end. When are mainly managed to settle territorial disputes jazaty. Nearly all the disputed territories were a part of Peru. 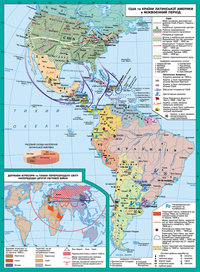 U.S. and in Latin America in the interwar period. Aggressor state and REDISTRIBUTION PLANS WORLD ON THE EVE OF WORLD WAR II 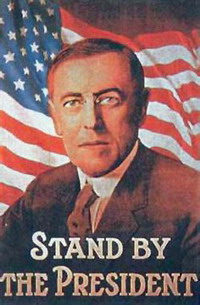 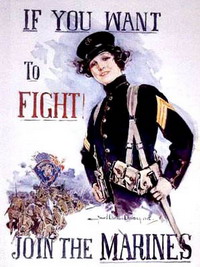 "Zapysuysya in the Marines." American poster from World War 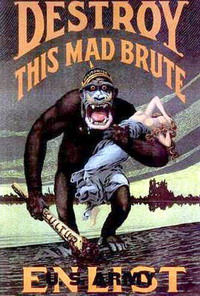 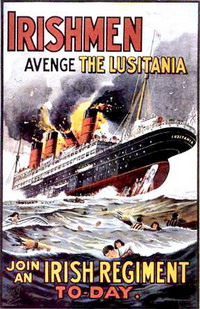 Poster calling for revenge for "LUSITANIA. The days of World War I 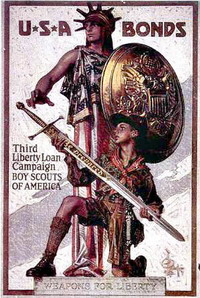 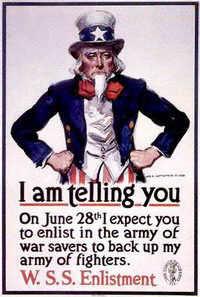 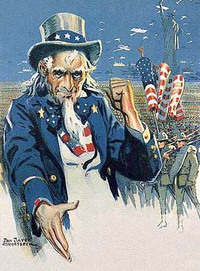 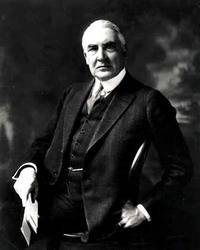 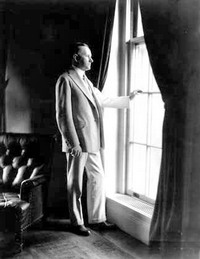 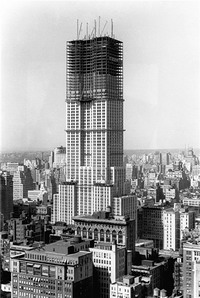 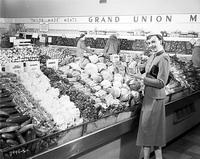 One of the first supermarkets 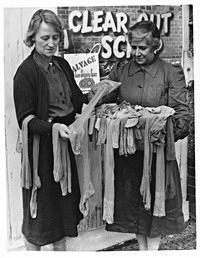 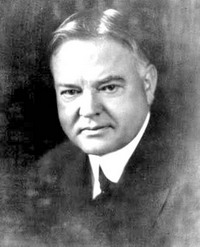 Withdrawal of alcoholic beverages in the U.S. 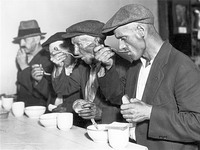 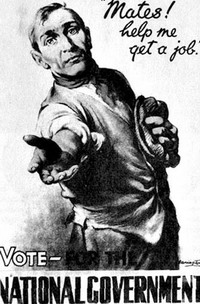 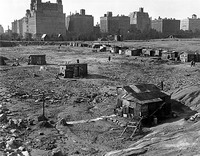 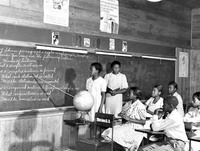 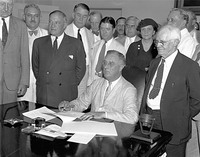 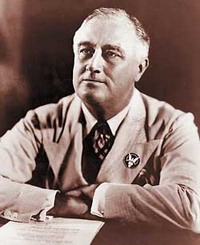 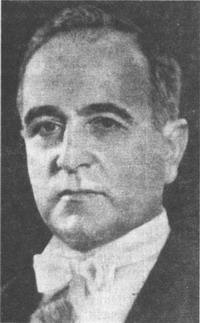 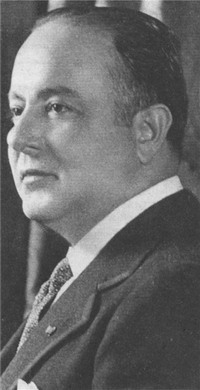 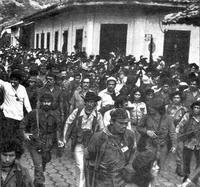 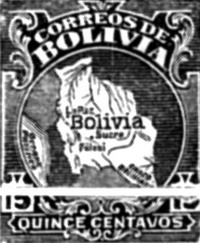 Bolivia stamp for 1920. Chaco shown as part of Bolivia 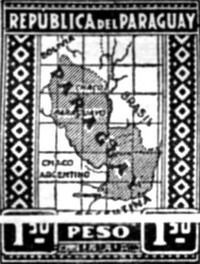 Paraguayan stamp for 1920. Chaco shown as part of Paraguay 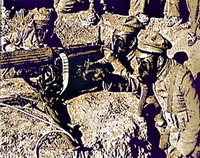 Bolivian soldiers during the war Chakskoyi 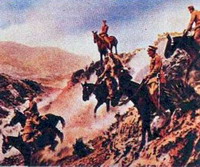