As a result of weakening of the realglobal military-political confrontation between the two blocs on the one hand,and the simultaneous escalation of regional conflicts and threats of "smallwars "- on the other hand, at the forefront of world politics after tomorrowprotection and security of person and of peoples, humanitarian, legal, culturalcontacts to disseminate objective information. A set of these characteristicsnamed the "human dimension". Specific people build prerequisitestrust or distrust between nations and states, and to them to solvemilitary-political problems, problems of protection and improvement of naturalenvironment, development of trade and economic, scientific and technical institutions.

Important bodies calledengage in humanitarian issues, ensuring the fundamental rights andfreedoms of the people is the CSCE (since 1994 called the OSCE - Organization forSecurity and Cooperation in Europe) and the Council of Europe - a regional intergovernmentalorganization established in 1949

The collapse of the Soviet Union and Yugoslavia, the formation of newIndependent States, the difficulties of the former socialist unionGermany and the integration of Western countries have become important factors in buildingEuropean house and development of international relations 90 years.

Failed former stabilitywhich relied on the quick reaction of superpower imbalance andmatching their steps with the possible reaction of the enemy, exactly as with privateability to neutralize him.

However, the collapse of the bipolarsystem caused a loss of policy guidelines in individual states, the collapse of ideologyTotalitarianism, where she reigned, chaos in the thinking of many people. As establishedcavity breaks nationalism, hatred, unbridled aggression.

Peacemakingefforts of UN, EU, NATO and other international structures are not always effective andadequate. Rather than risk a global clash of the world's heightened threatlocal wars.

Changes in the world didurgent task of the new European security system. In addressingfacilitate this task, as various multilateral meetings andBilateral contacts between European countries.

An important step towardsnew security system in Europe was signed in March 1995 52OSCE countries "of the Stability Pact in Europe." Countries that have signedpact committed themselves to develop good-neighborly relations based onthe main documents of UN, OSCE and Council of Europe, according to the principles of sovereignequality, respect for rights inherent in sovereignty, inviolability of borders,territorial integrity of States, respect for internationally recognized borders,non-interference in internal affairs, human rights, especially those whobelonging to national minorities.

In 1993-1995 Centre for Ethnicconflict in the former Yugoslavia, moved to CroatiaBosnia, which waged a struggle between three communities: the Serbian, Croatian andMuslim. The international community all the blame for the conflict resolution puton Serbia and April 25, 1993 established an economic blockade.

After four years of war in Bosniaunder pressure from the international community seriously conflicting parties finally sat downthe negotiating table and December 15, 1995 Peace Agreement was signed. Toimplementation of the agreement on Bosnia, NATO troops have entered the number 60thousand.

Vhamuvavshy conflict in Bosnia,the world community finds itself in the face of Kosovo, which camearmed character. Albanian minority in SerbiaNear Kosovo, took up arms to secure accession to the edge of Albania.The Serbian army had learned from anti-partisan warfare, violent meanswas to suppress Albanian guerrilla movement. To extinguish the fire at the newBalkans, intervened in the conflict the UN, NATO, OSCE and other organizations. Itforced the warring parties to the negotiating table and negotiate an agreement(1998). But implementation of the agreement all the time exposed to the resistance of its opponentsas one or the other, resulting in outbreaks of violence. Thatend the bloodshed in February 1999 under threat offorces from NATO, both warring parties back to the negotiating table. Butagreement has been reached. Blame for the failure of negotiations was launched inSerbia. NATO to make Serbia more accommodating,  solution yazaly war against her. Over 78 daysNATO aircraft bombed Serbia. Eventually, the Serbs had withdrawn their troops from Kosovo,but in the end were put NATO forces and Russia.

War in Kosovowas the last in the region. The following year war broke out in Macedonia, whereAlbanian minority supported externally launched a war against the central government.Finally, thanks to the UN, NATO, EU, OSCE conflict could tame.

Dangerous and tense remainssituation in the Middle East (Palestine, Iraq, Kurds living area, etc.).and in some states of the former Soviet Union (Georgia, Armenia, Azerbaijan,Tajikistan). Exacerbated the confrontation between India and Pakistan, which have madedecisive steps towards the transformation of a nuclear power by doing underground nucleartest. Serious blow to stability in the world has caused Asianeconomic crisis. To address acute conflicts in theseregions of the joint action of all stakeholders and internationalpeacekeeping organizations.

The emergence of newly independent statesled to a new alignment of forces in world politics. U.S. remained the onlysuperpower. Entered a new phase of struggle for spheres of influence.

Misunderstandings between Russia and the U.S.jeopardized the development of pan-European process and the process of nucleardisarmament. The differences result from different positions of the parties in mattersNATO's eastward expansion, in the settlement of the Middle East and Yugoslaviaconflicts. Russia seeks to play a dominant role in the formerSoviet Union. With these problems of the world entered the third millennium.

Beginning of the XXI century. did not bring peaceon Earth. Of all the problems that were inherited from the previous century, mostdangerous was the problem of international terrorism.

The reasons for the existence of internationalTerrorism today:

·         suspensenational problems, issues of borders. Much of peoples deprived of the rightto national self-determination;

·         lack of efficientmechanism to combat terrorism;

·         aspirations of individuals,organizations to the disruption of established world order, their desiresow grain of fear and uncertainty.

·         region useinternational instability for developing  their organizations and networks of terrorist activity;

·         supportseparatist movements in an attempt to control the national liberationmotions;

·         implementationlarge-scale terrorist actions, which would have world wide fame;

September 11 Terror Act2001 New York and Washington (captured suicide-bombingpassenger planes crashed into the World Trade Centre skyscrapers andPentagon House) urged the world community to unite in the fight againstterrorism. Was established broad antiterrorist coalition led by the StateUSA, which launched a large-scale counter-terrorist networkorganizations. This struggle is in the economic sphere (the elimination of sourceschannels of financing terrorist organizations);  military (of counterterrorist operations to destroy bases revealedterrorists) and others political. Important  towards fighting terrorism is the elimination of regional internationalinstability in some countries the overthrow of those regimes that support the activitiesterrorist conflict in hot spots. 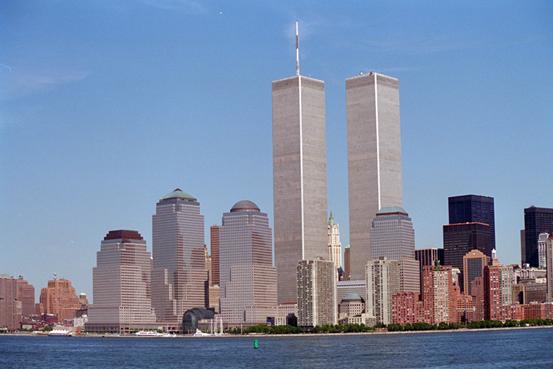 Responsibility for implementationterrorist attack in New York, the U.S. administration put on terroristnetwork of Al Qaeda, headed by bin Laden. The U.S. announced that a real warstructure. Since September 2001 security services arrested 70 countriesfifteen hundred members of this organization. In late autumn 2001 U.S. andallies in the coalition against terrorism launched war against the Taliban regimein Afghanistan, which refused to extradite al-Qaida leader. By the end of February2002 as a result of Operation Airtight Freedom Taliban regime wasoverthrown, but terrorists leaders managed to avoid arrest or death. Onpresent day struggle with the terrorist network continues.

Apart from direct combatU.S. launched by terrorists against regimes accused of supportingterrorism. January 30, 2002 U.S. President George W. Bush declaredexistence of "axis of evil" North Korea-Iran-Iraq. That is, these modes of thatweapons of mass destruction threaten the world.

Autumn 2002 exacerbatedthe situation around Iraq. U.S. and Britain claimed that Iraq was contrary toUN resolution 1991 never rozzbroyivsya (generally up to 2003 wasadopted 12 resolutions): he has chemical and biological weapons and their carriers.Also, Saddam Hussein zakydalysya ties with terroristorganizations, crimes against his own people.

To check accept UN suspicionsappropriate resolution to Iraq and was equipped special committee organizationwhich, after working for three months and found no weapons of mass destruction. Timfuture U.S. and UK are charging in the region and create troopsanti-Iraq coalition. All attempts to U.S. and UK through the UNresolution that would enable them to wage a war against the Baghdad regime,to disarm and overthrow him. However, their desire was not supportedworld community. Against the U.S. position were made by France, Germany, China,Russia and a number of other leading countries. France and Russia threatened toveto. Realizing that the legitimacy of their actions will not achieve U.S.Britain decided to act arbitrarily, breaking the whole system of internationalrelations that developed after the Cold War, ignoring allinternational organizations and public opinion. March 18, 2003 J.Bush Jr. an ultimatum to Saddam to power and he leftleft the country. March 20 U.S. and UK forces launched military operations(Commander, General Tommy Franks). After 21 days of war U.S. troopsestablished control over Baghdad and the British - on Basra. Hussein lostcontrol over the country and disappeared. April 14, 2003 any organizedresistance was suppressed. In early May it was announced the completion of combataction. But war is not over, the country opened a guerilla war againstAmerican troops. No such day not to come messagecasualties among the U.S. military.

Toppling Hussein regime posedon the agenda of postwar Iraq and the entire Middle East region.After a series of negotiations, U.S. and UK had died `yakshyty its position.UN, EU, also take part in reconstruction and building of power in postwar Iraq.

Worsening the situation around Iraqdecided to use the DPRK, which announced its withdrawal from the TreatyNPT, and resumed work on building nuclearreactor. It was a series of test launches of ballistic missiles andstatement regarding the existence of nuclear weapons. U.S. proreahuvavshy at first thisvery soft KIND, upon completion of the Iraq war began searching out of the imminentsituation in the region. However, real achievements and not.

Also not in conflict subsidesMiddle East. Unable to work out an acceptable formula crisisIsraeli-Palestinian conflict. The implementation of the road map probuksovuye.

TodayUnited States have an unprecedented military might, andlarge economic and political influence. In line with our past andprinciples, we do not use our strength for pressure forunilateral advantages. Instead, we strive to create balance of forces for the benefit offreedom of humanity - the conditions under which all countries and all societies can themselveschoose the benefits and problems of political and economic freedom. In a safe worldpeople can live better lives. We will defend the peace by fighting terroristsand tyrants. We will preserve peace by building good relations among greatStates. We will distribute a zone peace. Supporting free and open societyon every continent?

? This way not only for America. It is open to all.To achieve these objectives the United States will:

-       strengthen alliances toensure victory over global terrorism and take measures to eliminateattacks against us and our friends;

-       work with otherparties for settlement of regional conflicts;

-       interfere with ourenemies threaten us, our allies and our friends with weapons of massdestruction;

-       initiate a new era of globaleconomic growth through free markets and free trade;

-       expand the scopedevelopment, the increasing openness of societies and building the security infrastructure;

-       expand the fieldjoint action with other main centers of global power;

1.    What are the main problems of international relations dovylosya solve in 90years?

2.    Why the Balkans at the end of the twentieth century. again became a "powder cellar"Europe? How to solve the problem of the Balkans was correlated?

3.    What is international terrorism? What are the reasons for its existence?

5.    Fill in the table: "Major international events of the late 90 th century.- The beginning. "