To the east of Babyloniavast stretches Iranian Plateau, which is surrounded on all sidesmountains. In the east it borders on the Indus River valley, northern reachesCaspian Sea and in the south - to the Persian Gulf. Most of the Highlandsoccupy the steppe and desert. Summer is almost unbearable heat, and small riversflowing, usually dry. In the winter, much cooler.

In the western valleys Iran zroshuvalas land throughcreeks which flowed from the mountains. They could engage in agriculture. In the easternIranian Plateau stretches of desert. The main occupation of the population wascattle. In the hottest time of year, herd sheep and cattle were drivenmountain pastures.

Iranian Plateau is rich in minerals, especiallyMetals: gold, silver, copper, lead and iron. In sufficient quantities in the Iranianand stones, and on mountain slopes grow forests.

2. Iranian tribes and their religion

Inhabited the Iranian Plateau numerous tribes and nationalities:Medes, Persians et al. Some of them were engaged in farming, others roamedwith their herds of cattle. The Greeks called them zoroastpriytsyamy by name wise prophet Zoroastpra (in Iranian Zaratushtpra).He taught that the world going through irreconcilable struggle between light and darknesstruth and falsehood, good and evil. Light headed host Ahura-Mazda. He personified the benefit principle -good, light, fire, agriculture and cattle settled. Evil forceswear АнDeposit Maynyu (GreekAriman)That a personified evil, darkness, darkness, kochuvannya. Eachorthodox should participate in this primordial struggle on the side Ahura-MazdaTo approach the coming of the kingdom of good.

To go to heaven, one mustobserve cleanliness and order, to be charitable, to love and respect theirrelatives and countrymen, to speak only the truth, care for the land and livestock,honor fire and other "pure elements". Every orthodox shouldattract nomads, committing countless foray, to settledlife. It will, as taught Zoroaster, Win Ahura-Mazda over Anhra-Maynyu.

After winning Ahura-Mazda over Anhra-Maynyu, According Magian,dead raised and will merge with their souls. After this, the eternalkingdom of Good and Truth.

In ancient Iran (Persia) near Ahura-Mazda respect the other deities: the earth, the sky,heavenly bodies and water. Especially important role played by the sun god Mithras (The name means "faithfulness"). He was consideredgod agreement, contract security guard law and order.

In the VII century. BC Iranians are united aroundone tribes- Medes. Copper with time becomesone of the strongest of Front Asia. But not all people who were inMussels, subordinate Media king. 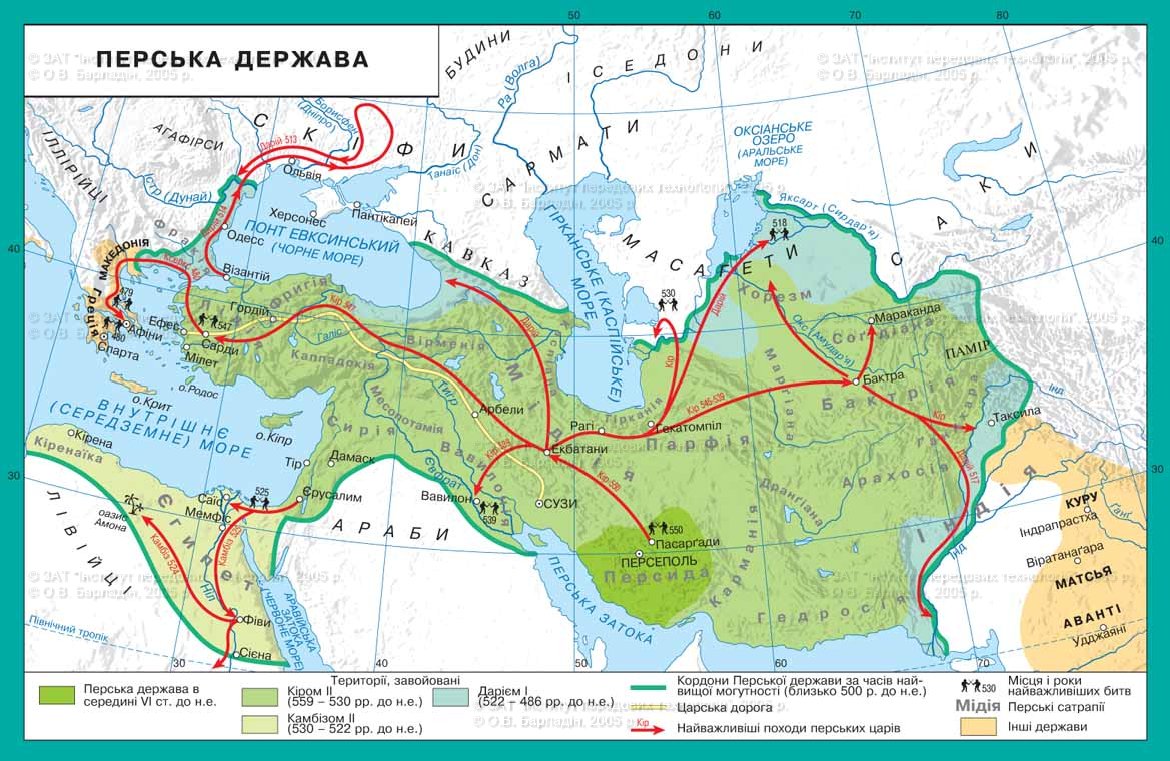 3. The emergence of Gulf states

In 553 BC against domination MusselsPersians revolted. Rebellion led by Persian ruler Cyrus II. Hecreated a strong army, and within three years he manages to conquer the Medes. Andthis he stopped. With a huge army, he moved further west. Measlesconquered one country after another. He conquered Lydia. Subsequently, the turn Babylonia. But to storm the huge city with extremelysolid walls was impossible. Cyrus took his wiles. One darknight, when celebrated in Babylon a great holiday, Cyrus ordered to divert waterEuphrates in other previously prepared bed. The river that flowed through the city,obmilila. And warriors waist in water successfully waded into the city and attacked the fordsresidents during their magnificent banquet. Thus, overnight Cyrus capturedcity and a great kingdom of Babylon.

After the victory of power over a voluntarily recognizedPhoenicia, Syria and Palestine. State Cyrus stretching from the borders of Indiaeast to the Greek cities in the west. Other conquerors Cyrus II seen in the fact that he respected the lawsand religion of the conquered peoples. This ubezpechuvalo his discontent and revolton the conquered territories.

Legendaryconsidered the founder of Persia Hahamanisha (700-675 years BC) kind of AchaemenidBecause its inhabitants are called Achaemenid. The oldest capital city of the country was Anshan.

Cyrus wanted to go on and on Egypt, but he preventedCentral Asian nations do masahetiv, which threatened the north-eastern border of the Persian state. Cyrus performedcampaign against militant tribes. But it ended tragically for this. Inboundless plains Persian army was surrounded by enemies and suffered a crushingdefeat. Measles, which turned the then 70 years, died in this battle.The angry queen masahetiv prescribed body foundCyrus neck and dip it in a bottle with blood. Thus itpronounced: "Drink your fill, the villain."

The conquest of the Persians did not cease after the death of Cyrus.His son Kambiz continued gains andat 525, the BC subdued juiceypet. Thatkeep power Kambiz remained in Egypt for threeyears, but soon died. Then the king was his cousin Darius I (Daryavahush) (522-486 yearsBC). "King of Kings" – so itcalled subjects. In 1936 he ruled Persia.

According to legend, Darius came topower after the agreement. Applicants for government decided that the kingwill be the one whose horse first zairzhe the gate at sunrise. Doneso that the horse of Darius brought his master the king's title and authority.

4. The kingdom of Persia under Darius I

He divided the country into 20 separate areas - lieutenants. Onled each of them was the governor - satrap. He oversaw the timelyreceipts taxes to the royal treasury for prosperity entrusted to himregion, how does the population of military and labor service.

Satrapy - A Greek word which originates fromancient Persia "hatrapavan, Which means(Lieutenants) Head region. Boundaries almost coincide with the borders of the formerindependent states. Yes Babylonia was the onesatrapy, Egypt - another, several lieutenants, was founded in Asia Minor and others.

Military units stationed in satrapy were underseparate command commander, who received orders from the king andwas independent of satrap. Satrap and warlord was obliged to follow aby one and make denunciations king.

In addition, throughout the country were sent to specialofficials, which were called ears of the king. They did it in sudden raidsone, then another satrapy, checked it and reported the king. For anycommitted a crime destined severe punishment: the conspirators waited in unbearabletorture, thieves and robbers chopped hands and feet.

Such strict control was necessary. Indeed, in the remotesatrapy of the capital might have a plot to separation and formationindependent states. А щonfacilitate communications between different parts of a great power, was laid wideways. They were well built and paved with stones.

The main way was the so-called royal road. She traveledthe whole empire from the city Susa the city Sardis, Near the Aegean Sea. Its length was2683 km. Along the road was built 111 stops,which could replace the horses rest and eat.

In Persia was organized by regular mail.She acted on the principle relay. Every 15-20 miles wasalert the rider of a horse. After receiving package, he ran into another office tothen pass it on purpose. Persian king could eat inShushan fresh fish, caught in the Aegean. This fishdelivered by mail relay method.

With unconcealed enthusiasm made Persian description of waysHerodotus. On the road every 15-20 kilometers were hotels where the visitor couldSleep and rest. There he could feed the horses and leave theirthings. These paths could move without fear, as they carefullyguarded. Guilty of robbery on the roads severely punished. According to Herodotus, theside of the ways you could see people cut off hands and feet.It is - punished robbers who robbed passers-by.

For each satrapy Darius appointed strictlycertain taxes, and also brought one for the whole state currency -gold Dariko. Name of the coins came from orthe king's behalf, or, most likely from Old Persianwords. gifts – "Gold". Was about 515 BCby order of Darius and the state capital was laid Persepolis (Pars) - "City of Persians". The city became a symbol of authorityking. Here in March each year officials from throughout the empire went to the palace,creating large and colorful procession with the soldiers, chariots andriders. King waited for them in the hall for receptions, where they reported theirwork. Then began the feast. In Persepolisalso held meetings with governors around the world.

In the Persian king had several capitals: in Persia – in Persia Persepolis, в Mussels - Ekbatany, в Elam – Susa, and in the biennium - Babylon. He then lived in one of the capital,in another.

The king surrounded himself unheard of luxury. Detachmenthis bodyguards consisted of 10 thousand people. The guards were called immortalbecause their number is always unchanged. Once anybodyguard perished or died, another took its place.

5. The death of the Persian state

Victory over the neighbors and other measures of Darius Iі his successors did not protect the country from the ongoingconspiracies, coups. Unsuccessful war with the Greeks led to the weakening of the state. In IV.BC in Persian is formidable enemy in the person Alexandra,young king of Macedonia. In Battle Issom, Hranikom, Havhamelamy Macedoniadefeated troops led by Persian king Darius III. Over 334-330pp. BC under the blows Alexandrahuge Persian Empire fell, but land that belonged to her staff, werepart of the great conqueror of the empire.

1. What is common in the beliefsIranians and Egyptians? What is the difference?

2. As arrangedControl the Persian state for Darius?

3. Tell us about the campaign of Darius Ithe Scythians.

4. OrCyrus can be considered a great military leader?

5. Whatsimilarity of power Persia and headlightones in Egypt? What they pursue similar goals?

6. What did Darius I, to preserve and strengthen itsPower?

8. What killed the mighty Persianstate?

9. Aswas organized by Department of Persian state for Darius?