Topic 6. Greece in the second - the first half of the thousand BC

Greecelocated on the Balkan peninsula in the eastern Mediterranean. Fromancient times, local people called in their native Greece. Westit is between the Ionian Sea and the east - the Aegean. From north Hellas Limitedridges of the Balkan Mountains. The highest mountains of Greece is Olympus (inysota 2917 m)and Parnas (2450 m).

Greecedivided into continental and insular. Continental has threeparts: the North (Aheyya), Medium (Attica) andSouth (Peloponnese). Aheyya Attica and connectedeach Fermopilskym gangway, and AtticaPeloponnese - a narrow isthmus of Corinth. The island has thousands of Greecelarge and small islands. The biggest of these is Crete, Euboea,Rhodes, Salamis.

Summer inGreece is hot and dry and relatively cool winters, though without the snow. Precipitationare mainly in autumn and winter. In spring and summer rains are extremely rare.No major rivers.

Itmountainous country with mountain meadows, ridges, valleys, where little landsuitable for farming. Only the north and south, and in mountainvalleys are relatively large areas of fertile land. On the slopes of mountains have longgrowing grapes, barley and vegetables in the southern valleys of the country dozrivalyoranges and olives. 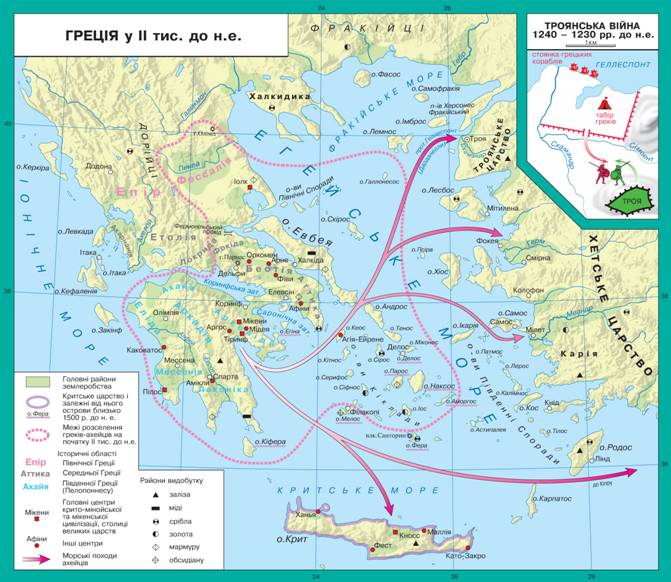 Greece in the second millennium BC

2. The population of ancient Greece

TerritoryGreece has been inhabited since ancient times, mostly in the fertile lands of the valleys of Thessalyand Dodon and on the islands of the Aegean Sea. In III thousandBC here begin to be formed military alliances are built fortifiedsettlement.

Suchsettlement turned into centers of agriculture and animal husbandry. Soonstarted to build a complex irrigation system. This gave the opportunity for conditionswarm climate to grow cereals, grapes, olives. Already at the time ofolive oil is made from grapes - wine vinegar.

Lifeancient population of Greece was inextricably linked with the sea. This is the only waywhich connected the Balkan peninsula to the islands of the Mediterranean. Frequentlydoplyvty to a neighboring village was easier to overcome than the path through the mountains. Seawas rich in fish and other seafood, because the population of Greece was skilled infishing and shipbuilding.

In III-II thousandBC from the north to the Balkan Peninsula invaded aheytsiv tribes.Gradually they took not only the continental Greece and the Aegean islands andSea.

EndII thousand, just to the north, came to Greece Dorians. They were markedextreme aggression and brutality. The ancient peoples who inhabited the territoryGreece and came aheytsi and Dorians formed one people, who receivedcalled "Greeks".

2. Which part of Greece is divided?

4. What people have formed a single people "Greeks?

5. How environmental conditions affectDoes the life and lessons of the ancient Greek population?