Oldsource of knowledge about Aheysku civilization were myths and legends of the ancient Greeks, thatdeveloped in aheyskyh transfers. Thus, the myth of the Argonauts (thosefloating on the ship "Argo"), though not aheytsyamy calls them, sayson trip Golden Fleece to Kolhidy grandson of the god of winds Eola - Hero Jason and itsmates. In child deprived of his royal power and put oneducation Sagittarius Giron. When Jasonreached adulthood, he decided to reclaim the throne captured by his uncle Peliyem. He agreed to transfer power if Jason completion of the golden fleece. Many years Jason Argonaut wandered with endless seasfairyland, overcoming many obstacles and making a lot offeats. Finally Jason Kolhidy reached. WithGods and daughters of the king of this country Medea character couldpass the test - the harness midnorohyh bullssow dragon's teeth of the field and overcome the Warriors, who grew up with them, outsmartdragon. Reward he was the golden fleece, which he, after many adventures andbrought to Greece.

MythTrojan War has directly indicates aheytsiv who fought the Trojan.The reason for the war was the abduction of the son of the king of Troy - Paris, Wife of the king of Sparta - Helena. Long aheytsi,led by king Mycenae Agamemnon, sought toTroy, but it is not possible. Then the king of the island Ithaca Odysseus proposedoutsmart Trojans. We have built a giant wooden horse,empty inside. Aheytsi got on the ship and successful that they rebel. Trojansglad the war ended. They went outside the walls of the city, where they met one of aheyskyhsoldiers, who explained that the horse is a gift of the goddess Athena. Trojans believed himand vtyahly wooden horse into the city. At night, when residents were asleep. the horse to the groundOdysseus and down aheyskyh 30 best warriors. They opened the citythe gate and let the main military force. So Troy was captured andQueen returned to Sparta Helena.

In half fromstory believed German archaeologist Heinrich Schliemann,who devoted his life to a mythical quest as then believed the city of Troy. Himbelongs in the opening championship and research Troy. Discovery of Troy provedthat reflected in the poems of Homer real historical events. In 1874 opened Mycenae.

In 1870G.Schliemann excavated and examined the ruins of ancient Troy onPeninsula Asia Minor (the territory of modern Turkey). He opened the mighty wallscities that existed at various times here. Among the findings of G.Schliemann- Treasure of golden things he regarded as treasures of the king of Troy Priam. As it turned out, belonged to his discoveryruler, who lived a thousand years to Priam.

Palaceking Mycenae located on the Acropolis, which is defendedstrong walls that stretched nearly 900 m and had a thickness of 6 to 10 pm They werebuilt of huge stone blocks weighing about 6 tons each.The main entrance to the palace served as the "Lion Gate". They symbolizedpower Mycenaean state. The gate, built withfour monoliths, triangular slab decorated with reliefs, featuring twolionesses guarding the entrance. Zvyvalasya from the gate on top of a hill road whichconnecting them to the royal palace. Its center was Megaron- Hall for celebrations and banquets with a fireplace in the middle. Placed around itrooms, chambers, corridors. Around the fire were four columns - support forroof had a hole through which the smoke coming out.

Acropolis (Translated from Greek. – «Upper City") - Enhanced and reinforced part of the ancient Greekcity, which served as a fortress and refuge for the population to the war heretemples were the greatest of Greek gods.

Schliemann investigated and found the nine tombs. The most notableof them is "Treasury Atreya». This underground building height over 13 meters was builtin the hillside. Have long considered that there is fabulous wealth concentrated Mycenaean Kings Atreya andAgamemnon. It turned out that indeed buried almost filled with productsgold and precious stones. The first tomb Schliemannand his expedition found gold laurel wreath and 15 gold diadem, in the second -over 700 gold plateswith images of animals, jellyfish, octopus, jewelry. They are madewith amazing skill and prove high level of jewelryart.

Outstandingfindings were the gold crown of 36 gold leaves, gold death maskMycenaean kings and the gold plates that hung onchest dead and who, according to the ancient Greeks had to protect the dead fromvarious difficulties in the afterlife. The most famous mask from the collection Schliemann was "Agamemnon Mask". She argues that the ancientGreco - stricter warriors - in high esteem is great and their masters can transmithuman nature in works of art. Treasures found in royal tombs andaheytsiv wealthy tombs, there is also evidence of the division of contemporary societyinto rich and poor.

In 1884archaeologist began another investigation of Aheyskoyi civilization - Tirynfa, Home of the legendary Hercules. Schliemann found the remains of a grand palace, built asPalace in MycenaeWith huge boulders. Inbottom of the palace housed the business office and stable intop - with wall thickness of 11 m and a height of 16 m - lived ruler. All roomswere whitewashed and the walls are decorated with paintings.

3. The heyday and decline of civilization Aheyskoyi palace

Oldcivilization centered in Mycenae was establishedcame nomads - aheytsyamy. They appeared in the Balkanpeninsula in the XXI century. BC The level of their economic andpolitical development at the time was lower compared with the local population.Aheytsi dressed in rough clothes of wool, made pottery and simpleweapons of bronze. Later they learned a lot from local tribes: growgrapes and olive oil, build ships and produce high-quality ceramics, erectbuilding stone.

City Mycenae aheytsi founded in the XIX century. BCHaving grasped in the XVI century. BC Fr. Crete, aheytsi taken from there not onlyart, but also the best Cretan artists. And already after 100years in the new palace Mycenae was decorated with muralsCretan in style. On this basis, but also because the palace MycenaeanKing, as well as the Cretan palace was the center, around which the focusall of life, civilization called the palace.

In the XV century.BC Mycenae reached its peak andturned into the greatest political, economic and cultural center of Greece.Then aheytsi began to actively develop the spaces in the Mediterranean and Asia Minor.During the trip they learned from Phoenician and Egyptian cultures andborrowed these peoples love for knowledge and books, the secrets of making paints.

At this timethere are dozens of new cities, including Thebes andAthens. Like MycenaeThey were fortificationscitadel and palaces. The kings of the new city-states waged a constant struggle among themselves forrule in Greece. However, the most influential were the kings Mycenae,who rule over the other city-states.

About XIV century. BC was foundedcity of Troy. Scientists believe that in the first half XIII century. BC Troy was destroyed by a powerfulearthquake. But the woes of Troy, the rich were not over. Around 1270BC kings of the Greek city-states led by MycenaeanKing Agamemnon began a long war against Troy. According to Homer,it lasted 10 years. Therefore we can assume that the war ended about1260 BC Confirm it and archaeologists, who argue that thisTroy was in a prolonged siege. The war ended with the defeat of the king of Troy Priam and the capture of Troy. 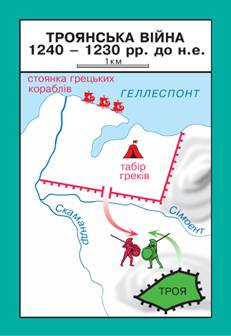 Riton - A vessel for drinking in a corner. Often completed a sculpturalimage.

Aftervictory over Troy Mycenae begin to lose their influenceaheyski on the city-state. Their union falls apart. Weakening dispersedaheyskyh advantage of Dorians - tribes that constantly threatened theirabroad. In the middle of the XII century. BC they took over Greece.Tribes Dorians did not know what the state system, they had no written language,but they were able to handle iron and produce weapons with him and had a goodorganized army that consisted of heavy infantry and cavalry.

OnUnlike aheytsiv, not followers culture Dorians conquered and destroyed it.Captured flowering of aheytsiv - Mycenae, Athens, Tirynf, Pilos and others - weredestroyed. Scientists, artists and artisans were forced to leave their homeland.Gradually declined trade, shipbuilding collapsed what proudaheytsi - water pipes, roads, bridges and palaces. Missing murals, writing was forgotten.People who could read and write, persecuted as criminals or sorcerers.So, all achievements Aheyskoyi palatial civilization were lost, and Greekculture has been rejected a century ago.

2. At the time of decline and fall flowering Mycenaean цyvilizatsiyi?