§ 44. Natural conditions of Italy and the city of Rome (textbook)

§ 44. Natural conditionsItaly and the city of Rome

Italy is situated on the Apennine peninsula. From north to south itextend the Apennine mountains. Peninsula is washed by five seas: the south - Ionianand the Mediterranean in the west - and the Tyrrhenian Ligurian,and from the east - the Adriatic. Nearby big islands - Sicily, Corsica,Sardinia. Climate Italy softer than in Greece. From the cold north windsit protects the highest mountain in Europe - the Alps. The rainfall in central andNorthern Italy is sufficient. Fewer them down in Southern Italy. The territorycountry's major rivers flowing enough - Po, Arno and Tiber. UnlikeGreece, Italy, in many areas suitable for farming and cattle breeding.The ancient Greeks called this country "Italy" - Country calves. In the Apennine mountains aredeposits of copper, tin, iron, gold and silver. Rich in Italy and to constructionstone and clay.

The oldest population Apennine peninsula tribes believe Ligure, sykuliv, sikaniv etc.. Other tribes have come later. AmongItalics are notable people came, which might have given the name of the country. Over timebased on local tribes formed and came nine tribes. Among them- Latin, umbra. Sabine et al. All this - farmerstribes, which had advanced metallurgy, pottery and other handicrafts. IslandSicily populated with migrants from the city of Carthage. 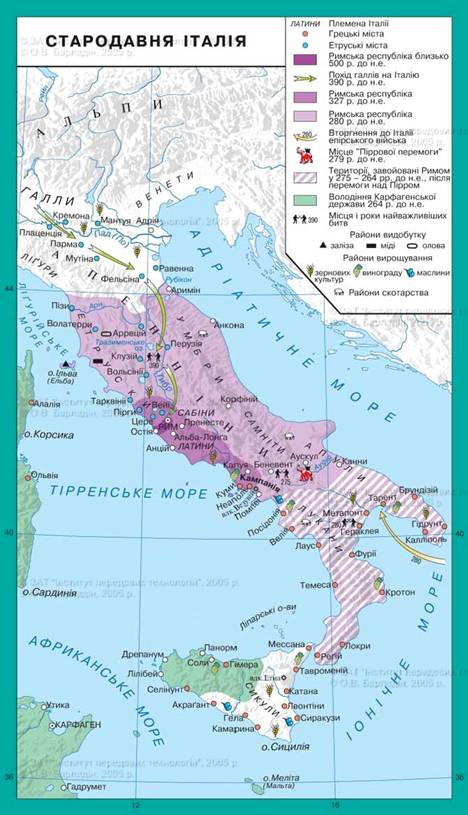 In the X century. BC Etruscans were in Italy (Rasen).They arrived at the Apennines and the sea gradually seized the territory from Tiber to the Alps. Inhabited their land was called "Etruria".

In the Etruscans were developed agriculture, animal husbandry and handicrafts. They coulddrain swamps, build irrigation canals. At its cultivated fieldswheat, oats, barley, flax, pomegranates and other crops. Famous and Etruscancraftsmen. Weavers artfully produced linen fabrics for clothing, sails, etc..Potters produced beautiful tableware and exquisite sculptures. The real masterpieces wereworks of Etruscan goldsmiths. With subtle silver and gold itemsamber and gemstone jewelry they made.

Ancient people founded many cities. They all had solid stone walls andtower. Cities of the Etruscans were clearly planned. On the cobbled streets of directhoused the stone houses and temples. Etruscan civilization had its own written language. Onthe former Etruria found over 9000 titles, which were totoday could not decipher. One can only guess that couldwritings tell about the life of this mysterious people.

It is known that Etruria long waged against Latin in preserving theirlands. And even after their conquest in Latin III. BC theytried to escape from their government. The last uprising was the Etruscanssuppressed in Latin and art. BC

Etruscans considered the founders of Rome, which is the name of the powerfulEmpire. Archaeologists have found remains of Rome in the stone fortress,Etruscans built in VIII century. BC

3. The emergence of Rome

Legend connects the city with the names of two twin brothers Romulus and Rem. Their grandfather was king, whose government deniedown brother. And he ordered the twins in the trash thrown into the Tiber. And kids are notdied. She-wolf nursed them and trained shepherd. When the brothers have grown up, theylearned of his royal descent, regained the throne. 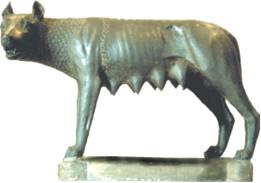 Govern together brothers had not. RomulusElectedgods, became king. The brothers decided to build a city where they are fedshe-wolf. But they quarreled, and Romulus slew Remus.Founded in 753 by BC city he gave his own name Rome.

«...Romulus gave the king suchlaw: that he led the holidaysschennodiystvaand sacrifice to save the legislationtion and habits of parents, heavierrozbyrav crimes himself, and instructed the lighter of the Senate; gathered Senate and invited the people andhad a higher power during the war ... "

What responsibilities to society was king?

Members of the community were divided into Roman patricians, plebeians and slaves.Patricia, who belonged to the Latin fathers have the right to own land and takepart in popular assemblies. Plebeians belonged to the conquered peoples of Latin(Including the Etruscans) or displaced. They, unlike the patricians, had norights to own land and participate in the National Assembly. Marriages betweenpatrician and plebeians were forbidden.

In ancient Roman society was already fairly complex systemmanagement. In VIII century. BC Roman community was headed by the king - RexWhichelected to the National Assembly. He was also a military leader and priest. The symbolspower the king had a throne, decorated with ivory and 12 guards - liktoriv.Guardian of the customs and traditions, compiled a special calendar where an effectfavorable and unfavorable days for Rome, was a great pontiff. 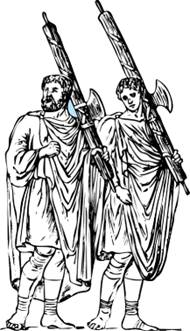 Another authority was the Senate. Senate - Council of Elders, whereHeads of families were - Patricia. ToIt consisted of 300 300 ancient patricians' houses. Since it was consideredthat these 300 families founded Rome, the senators called the "father".Their main duty was to protect the law of the king, and most citizens of Rome.The Senate could reject the People's Assembly or the king in making the decision ifcontrary manner. The offices of Senators were for life. At the head of the Senate standing pryntseps - The oldest Senator. The Senate announcedwar or had signed peace, discussed the bills treasury knew. When Kingdying, then to elect a new governor every day the Senate determined by lot"Acting". He handed the keys to the treasury seal Romesymbols of imperial authority.

Voting in the Senate was quite unusual for us: those who advocatedfor this or that decision, withdrew to one side, who - against the other.

But all the fullness of power in Rome, focused not on Rexor Senate, and in popular assemblies. They take the laws andconducted trial. Here is elected king myluvaly condemnation to death.The People's Assembly held in curia and had the name "Kurialni Auditing Commission». Each curiabelonged to 38 genera. The meeting took place in downtown. To decide,It took more than half the votes.

Workers - The poorest citizens of Rome, whose wealthwere only their offspring.

From 753 to 509, the BC in Rome, usually six kings. Penultimateof them Servo Tulliy (578-534 pp. BC)carried out reforms aimed at improving governance. ToReform of the Roman state was divided by 30 Kuriy by their generic affiliation. Itwas not always easy to manage, because the families could settlegeographically far apart. Servo Tulliy identifies four regional districts (tribes). ToPeople's Assembly has added hundreds of charges (centurion - military-territorialunits). Now the Romans voted intsenturialnyh Auditing Commission -Meeting soldiers. All that bare military service, gathered for meetings on tsenturiyah,and deciding where the most important state affairs. In total there were 193 centurion.Each had one vote in the National Assembly. Servo Tulliy all Roman citizens divided into classes.Depending on the property and profits were allocated riders proletarians and five moreclasses. The duty of each class was to provide for a number of armytsenturiy, that hundreds of soldiers. Most riders gave - 80 tsenturiy,And the class - 18, II class - 22, III class - 20, IV class - 22Class V - 30 Workers - 1 centurion. Soon after the completion of reforms Serviya Tulliya killed Tarkviniy Proud of the genus Tarquinia.He was the last Roman king. Tarkviniy triedRomans deny the right to participate in state administration. During his ruledeclined the role of national assemblies. Following the Greek tyrants, he soughtpower alone. In 509, the BC, when the insurgent people driven Tarquinia Proud, ended tsarist era in the history of Rome.

1. Describe the geographical position of Italy.

3. What rights had the king, senate, national assembly?

5. What was the difference between a social situationplebeians and patrician?