§ 45. Roman Republicfrom V to the middle of III century. BC

Depriving the government of the king, the Romans began to assemble a new management systemstate in which combined features of democratic life (people power) and the monarchy(Sole control). But the basis of powers remainedprinciple of selectivity for all positions. The important role played in societyPeople's Assembly (Auditing Commission). They were more species - inCuria, tsenturiyah and tribe. In kuriatnyh Auditing Commission celebrated the birth of children, entry into adulthoodyoung men, marriage and held ritual of mourning for the dead. In tsenturiatnyh - Endorsed legislation, elected consuls,Pretoria, censors and quaestor. Trybunatni Auditing Commission choose the platform and ediliv.Republican elected officials in the period known as magistrates. All theseelected for one year. Each magistrate had immunity. He was consideredpersonification of the state, and therefore action against him, regarded the whole imageRome. Consuls were the highest magistrates. This position could elect two citizens.Like kings, they had a throne of ivory, 12 liktoriv-guardsled army and were the supreme priest. Consuls of the war could punishto death for treason. In peacetime, they issued orders, directing stateceremonies. The highest judicial authority had two Pretoria. One of them considered the dispute between Roman citizensand the second - between citizens and foreigners. Pretoria followed the order 5city and suburbs.

Two censors conducted censuses of Roman citizens and property division performedthem into classes. They were allowed by the Romans to punish adultery, inappropriate trainingchildren, lack of patriotism. Quaestor comply with the state treasury,divided captured enemy trophies.

Rights defenders plebeians were two stands. They, like their homes, wereinviolable. And day and night in theirplebeians homes could find protection and assistance. Tribunes had the right"Veto", that is, making laws against plebeians, the rightarrest any official who oppressed the rights of commoners. Edily Rome took care of accomplishment, training and holidaysvarious shows.

The peak of his political career for each Roman was elected senator. InSenate of the Republic, there were 300 people. Senators endorsed the decisionsthen asserted People's Assembly. In extreme circumstances they couldproclaim dictator oneconsuls. The Senate declared that the Romans are the "enemies". These individualsdeprived of state protection. The duty of every citizen was considered murder"Enemy people". The Senate considered the disputes and crimes of the magistrates.

Since the formation of the elected government, increasing the role of national assemblies andSenate in Rome has established itself Republican politics.

For the Romans, always the main occupations were farming and war. Bylegend Romulus Rome forbade citizens to trade andlyhvaryuvaty. He believed that farming work strengthens the body and the spirit of a warrior. Anecessary to protect their country, their people, their land. UnlikeGreeks paid much attention to sports training and racing art,Romans preferred to manage a horse, hold a spear and earthworkancestors. First, even Patricia independently cultivated their small plots.

Cultivated mainly wheat. Developed agricultural sectorwas wine. Later spread olive cultivation. From ancient timesin Rome evolved most essential to everyday life crafts - weaving,pottery, blacksmithing, arms manufacturing and so on. Roman merchants traded mainlyon the Apennine peninsula. Goods from other countries to Rome by sea and by landbringing foreign merchants. After selling the goods they bought for localSales outside of Rome.

In republican Rome society was quite difficult becauseconstant political struggle between patrician and plebeians. Gradually plebsnot equal in rights with the elite of society. First theyachieved the election of people's tribune to defend their rights. Later in 449, theBC, they managed to get patricians adopt written laws, called Laws XII tables. They wereengraved on 12 copper plates and placed in the center of Rome on the mainarea - the Forum. Now for all citizens, regardless of origin, the law wasone.

Laws XII tables provided the death penalty: for crimes againstRepublic, against religion, for witchcraft and perjury in court. Bythese laws severely punished debtors. For debts that man could become a slave orgive their own children into slavery or wife. If the debtor is not turning borrowed,then by law it into as many parts rozrubuvaly how many creditorshe was guilty.

In 445, the BC was allowed to enter into marriages between patrician andplebeians. Yet it took nearly 1980 Nizami city to achieve the rightchoose one of two consuls. In turn, Patricia won the right to postplatform. So Rome has formed an official nobility of patricians and plebeians - optymaty.The changes occurring in society, promoted reconciliation between patrician andplebeians, strengthening the authority and unity of the state. The stable situation in the country Romeused for further expansion of the territory.

Ideal for the Romans was Mani Kuriy Dentat.He was elected three times consul, he was a successful military leader, but a small arealand cultivated by himself. Transfers are told that when they came messengersvanquished nations and offered him a gift of gold, Dentat showed them to rip you yourself cooking for dinner, and said:"While I am satisfied with this dinner, I do not need gold. I prefer to have authority over thosewho has the gold. "

Rome from its foundation, constant wars waged for land. The need for themwere determined by the fact that the land distributed among the soldiers. And because soldiers wereall citizens (men), the land was never enough.

More than 200 years, Rome fought with neighboring tribes that inhabitedApennine peninsula until they united under his power. In this way inHe had great victories, but there were terrible failures.

History has kept information about the attack on Rome in the V century. BCtribes of Gauls. They burned an insecure part of the city, but the Romans hid inFortress on Capitol Hill. Night enemies attempted to overcomereinforcement. They heard the geese, which raised the noise and woke protection. City couldsave. Since then, the famous saying: "Goose saved Rome.

One of the most brutal war for domination of the Apennine peninsula was Tarentska War (282-272 BC). OpponentRome was founded by Greek colonists in southern peninsula city-state Tarent. with which the Romans had earlier peace agreement. But whenRomans placed their garrisons in the towns near Tarentaand brought the fleet in Tarentiysku Bay (by agreementthey had to do this) Tarent Rome announcedwar and enlisted the help of PierreKing oneGreek states - Epirus.

The next battle took place near Auskula onbrushy field. No cavalry or elephants Pierreuse effectively failed. But the won, albeit at a hugelosses.

On the battlefield were killed in 1913000 thousandhis soldiers. The Romans lost 1915000 thousandWinning the battle that Dallas a great price, did not bring victory in war. Exactlythe consequences of this battle related known phrase "Pyrrhic victory".

To overcome the enemy, Rome formed an alliance with Carthage. Go to Carthage laterbetraying Pierre, Joined by some Greek cities. In272 was BC PierreAfter suffering multipledefeats, had to conclude a peace agreement with Rome and leave the territory of Italy.

At that time Rome was well organized and trained army. Military service washonorable duty of every citizen from 17 to 60 years. Warriors under1946 had to walk in military campaigns. Older soldiers mustwere to protect the city walls. One who shunned military service of thoughttraitor and sold into slavery. Basic Roman military unitArmy was legion. They are usuallywas four. Each legion zarahovuvaly 300 horsemen of wealthy citizens and the 4200-foot legionnaires.The poorest citizens served in the navy. 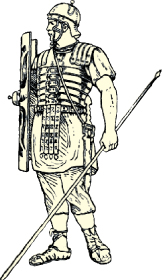 The youngest soldiers were out fighting the order. They were called bid. Ozbroyuvalysya command the sword, spears and Lightround shield. On the head they wore a flat hat, sometimes dressed inWolf's fur. Foot soldiers covering the flanks of horsemen. One maniple consisted of two divisions - tsenturiy. EachCentury was their commander - Centurion - and its bearer.

1. Open the text of the laws XII tables.

3. What differed Athens and the Roman system of government?

4. For what was fought struggle between patrician and plebeians?