Octavian concentrated in the hands unlimited power. In 1929 BCHe reviewed the composition of the Senate and removed from positions of supporters of Mark Antony,Republicans and their personal enemies. To win over the townspeople,He celebrated a few triumphs, in which distributed the money and bread. ThenThe Senate awarded him the title of emperor. During his reign, Octavian21 times getting this title. An astute politician, Octavian on specialmeeting, the Senate denied power dictator and consul, leaving themselves only honorabletitle pryntsepsa Senate that is first amongSenators. However, despite the existence of the Senate and other elected bodiespower pryntseps Octavian ruled alone. Formof government-led pryntsepsom receivedname "Principate". It lasted for almost 300 years.

Dependent Octavian Senate gave him more and more titles and positions. Among them - the honorarythe title of Augustus (exalted gods ") which became a title. In 2 yearsBC Augustus gave the title "father of the fatherland." In 1923 BC, despitethat he was patricians, he was elected people's tribune. This post Augustreceived 37 times. 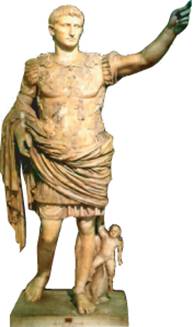 Octavian was in its own treasury - fisk. It received income from Egypt, which became his property, andwell as provincial Gaul, Illyria, Macedonia and Syria. Under the command ofOctavian were 300 000 committedhis soldiers were a reliable tool for keeping order in the country,protect its borders and the conquest of new lands. Fearing a conspiracy, he has takenbodyguard - praetoriancohort (9000people). Commanders pretoriantsiv - Prefect - Octavian appointedcommanders loyal to him.

Pryntseps conductedpolicy of "carrot and stick". Poor citizens he continued distributingmoney and food, organized an amazing holiday, burn ordered lists of debtors.However, Octavian returned runaway slaves to their owners and restored lawin which the owner punished for murder in the death of not only the guilty servant, but allslaves, who during the crime were in the house. 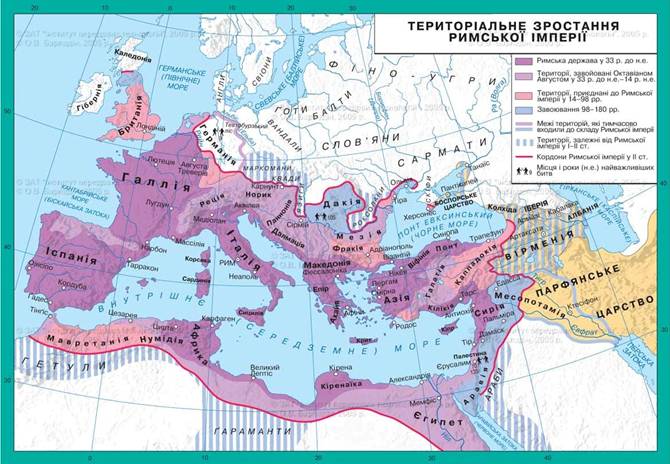 Augustus and took care of extending the Roman state. OnProvince was transformed Pannonia (ModernHungary) and Germany (modern Germany). Under the rule of Rome were hugeterritory. But further expansion of borders has been stopped numerousrevolt in the conquered territories. Forces of Octavian focused on healthborders of the state. Eventually, Augustus proud that gave people peace of Rome.He started the cult deity peacetime - Augusta world - and builtMars field in marble altar of Peace. Indeed board Octavianensure stability in society. Strong government was able to confront bothslave rebellion and discontent of citizens and external enemies. Mightystate during Octavian was named Roman Empire.

In the story of Octavian became not only a politician but also as a builder. HeForum was built by order of Augustus, the temple of Mars-avenger, who had to remindRomans that pryntseps revenge for the death of JuliaCaesar. With a rich second Maecenas He financially supported poets. Therefore, in our timepeople who help artists are called benefactors.

Augustus lived almost 76 years. He was buried in Rome in speciallybuilt mausoleums. After the death (in 1914 BC) Octavian announcedgod.

Since the absolute rule as passed to Augustus, heItalians freed from labor, stripped of their weapons and fortifications surrounded by stateand military camps, set employed by some soldiers as health maintenanceRoman state, he insured the state, shielded its major rivers,strength of the trenches and mountains.

Pryntseps - Senator, who was first in the list of Senators and hadauthority and the right to opine on the first meeting of the Senate.

Augustus appointed his successor with the natives of family, Claudia - 56 yearsTiberius (42 BC - 1937 BC). He wasexperienced military leader who conquered the alpine nations, and triumphed in Pannonia and Germany. According to legend, as Augustus said of Tiberius: "Poor people of Rome! In what he getsslow jaw. Indeed, the new governor was not trying to win loveRomans. He stopped to hand out bread and arrange sight. All possiblecontenders for power, except Gaya Caligua,were killed. In 1927 BC Tiberius left Rome andsettled in o.KaprWhere and continuedgovern the country. Violent emperor liked to watch the torture andexecuted as criminals and innocent people. The Romans, who disliked the princeshouted: "Tiberius in the Tiber! "When in 1937 BC Tiberius ill, one of his servants strangled the emperor.According to the covenant of his successors were Guy CaligulaandTiberius Hemella. Caligula eliminate his rivals and became the ruler of Rome.

Grove Caligula (12-1941 BC) tryingstrengthen his power in Rome, resumed gladiatorial combat and other theaterhanding out money to the poor and hosted a banquet for the Senators allowedexile and return of prisoners spared. He considered himself a god Jupiter,therefore ordered to construct a mechanism that imitated the thunder and lightning.Chairman of the statues of Jupiter in Rome have been replaced by sculpted images Caligua. He built a temple dedicated to where the Romansworshiped the golden statue of the ruler. During the year the Emperor spent all statecosts and predatory introduced new taxes.

Caligula triedcontinue the traditional policy of conquest of Rome. In 39-40 years hedeveloped plans for final pidkorennl conquered,but not subdued the nations of Gaul, Germany and Britain. Although great stridesthis is achieved, it 7 times proclaimed emperor. Althoughhad a good education, people he considered personal property, as well as allRoman province. In 1939 BC was uncovered a conspiracy against the emperor, and withthen Caligula constantly feared betrayal. Hissuspicions realized. In 1941 BC during the holiday in honor of Palatynskyh games he was killed.

Representatives of the genus by Claudia days of the republic 28 times were consuls, 5 time dictator 7 times censors and had 8 triumphs.

The next emperor declared pretoriantsi - guards Caligua. This once again proves that the army remained influentialforce in Roman society. Emperor became Claudius (10 BC - 1954 BC) - The only way Caligua,which accidentally found one of pretoriantsiv at the Imperial Palace. Claudiushad many physical ailments: stuttered, shkandybav, head and his hands shake. OnSenate meeting should bring a stretcher. The first thing that made the new ruler - losekiller Caligua. He resigned from the Senate, abolishedsome taxes are set by his predecessors, turned the captivity, canceleddeath penalty for the offense majesty the emperor. He predicted the new lawsprosecution of those who built a slander. Sick slaves, whose masters were thrownown, had become free. Having triumphant trip to BritainClaudius annexed to the six provinces of the empire.

Claudius was afraid and conspiracy at the outset of his reign, commanded the prowlall who approached him. But he was not destined to die by the sword the enemy.Claudius was poisoned by his wife Ahryppina and her son Nero.

In 1954 seventeen Nero(37-1968 BC) wasemperor. His name sabinskoyu language means"Brave, strong." But it does not justify it. Nero was a teenagerof the gang that robbed passers-by. It is no longer interested in politics andmusic, painting, sports, and he dreamed of a career actor. Travelling Greecetried in various competitions, performed in the decathlon at Olympia. Thoughthimself as an outstanding poet. There were rumors that a terrible fire in Rome in 1964was organized by Nero. The alleged appearance of burning Rome inspired him towriting poems about the burning of Troy. But the evidence against Nero was not. Hepersonally led the reconstruction work. With Nero Rome adorned straight streetsand built the first fireproof building. Nero was the last emperorIulius imperial dynasty dynasty, Claudia. Alarmed by his tyranny, the Senate declared the rulerenemy of the people. Nero rebelled against the war. He then fled to a villa inRome suburb where caused a death. They say that by dying, Neroexclaimed: "What a great actor dies!" After his death during the year changedtwo emperors. In 1969 dynasty came to power Flavia.

No he did not wear worn twice ... Fish caughtgilt mesh with purple and red rope. And traveled not less thanthousand chariots, the mules were silver horseshoe ... He built a palace, callinghis first pass, and then, after the fire and recovery - Gold ...Hall it was such a height that it was a colossal statueEmperor, 120 feet tall, its area was such that the triple porticoon the sides of a mile long ... In other apartments allwas covered with gold, ornamented with precious stones and pearls.

1. What in the narrative Gaya Svetoniya showsincredible luxury, which was keen Nero?

The first emperor of this dynasty - Vespasian (9-79years) was experiencedcommander, participated in the invasion of Britain, led the province of Africa,conquered Judea. Emperor Vespasian elected annuallyconsul and tribune. He wanted to transfer power to his son Titus and already in his lifemade him co. In 1971 Vespasianappointed him prefect of the praetorian guard, leaving himself the title of Augustusand the position of supreme Pope. In 73-74 years theyexpelled from the Senate with his opponents. After that, nobody daredoppose the emperor. Even his palace Vespasianleft without protection, demonstrating the strength of its power. He gave the order to the army,restoring discipline. To strengthen the state and army reform neededwere heavily because the governor did not consider it impolite to dointermediary trade, receiving bribes and selling government posts. Exactlyit by introducing a tax on use of public toilets, said:"Money does not smell."

After death Vespasian in 1979 All power in the country belonged to Titus (39-1981). Beginningfather of his rule high expectations for the Romans. He even called"Love and delight of the human race." He proved ability to versification,playing musical instruments and calligraphy. On the other hand, was experienced andskillful commander. To gain the commitment of people lost their property toreconstruction of houses and churches in Rome after a terrible three-day fire. It is athis rule fell Vesuvius eruption that destroyed Pompeii and the city Herculaneum. The emperor made generous donations to those whosurvived. Then the plague began in Rome, which also had to fight.

Even a short board Titus brought glory to the builders. At Empirethere are new roads. In 1980 they finished the uniquefacilities - Flavia amphitheater (Colosseum). But, unfortunately, Titus had poor health.Back in the young years he had tasted the drink with the poison, from the death of his brother BritannicaAnd had been ill. After one of his performances wasevil. He died on the same villa as his father. His rule lasted twoyears, two months and twenty days.

In 1981 in the country came to power brother Titus - Domitsian (51-96 p. BC). whichwas a real tyrant. Like his predecessors, he had many titles. Domitsian was 16 times consul, tribune - 16 yearscensors - for life. He claimed 22 timesemperor. Domitsian persecuted disagree with himSenators killed the cousins, drove from Italy of all philosophers. The overallhatred of the emperor used the policy. September 18, 1996because of Dvirtseva conspiracy was the last of Flaviakilled.

The true greatness of Rome provided a dynasty Antonina. Its first emperorwas the oldest of Senators - Mark Koktsey Salmon (30 or 35-1998 BC). ShortlySalmon transferred power Mark Ullitsiyu Trajan (53-117 AD). Romewarriors admired this talented military leader. He expanded the territoryRoman Empire to an unprecedented size. For 101-107he after long wars of Trajan annexed Dacia(Territory of Romania). In 106 wasHe conquered Arabia. In 114-117 years annexed Armenia and second anniversary.It seemed that victory would end, but during the rebellion in Judeaemperor died.

The most successful in combating rebels and barbarians was the outstandingstatesman and philosopher Mark Aurelius (121-180),who became emperor in 161, the He managed to suppress the rebellion inArmenia, second anniversary, Dacia. But do more for the empire he had not. In 180 was during raidGermanic tribes he died of plague. According to another version - was murdered byson.

Son of Marcus Aurelius - Commodus Lucia (161-192's) was not worthy of his fatherachievements. This is the first emperor, who took part in gladiatorial combat. Heordered to execute the most prominent senators, friends of his father. For the Board Commodus tradition of public and political life weredenied. Contrary to what a Roman that only citizens can manageState, the whim of the emperor former slaves became senators. All thishas caused hatred of the Romans, and as a result of collusion emperor was murdered. 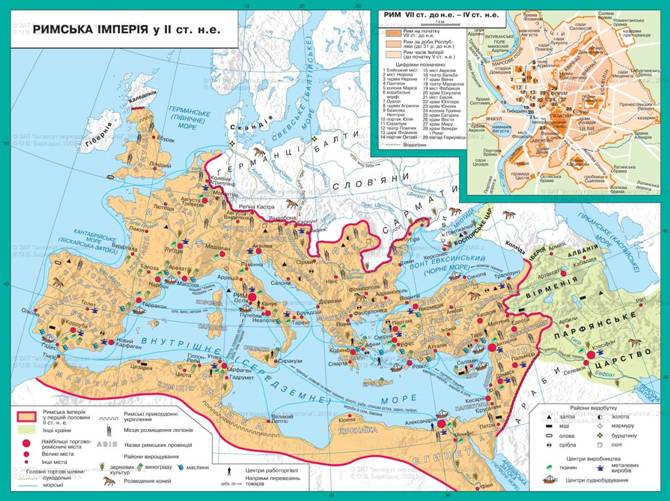 The Roman Empire inII art. BC

1. What are the characteristic features of Augustus Principate.

2. Board any of the Roman emperors, in your opinion,can be evaluated positively and negatively whom?

3. What changes in state administration took place when the republic has changedEmpire?