Growing popularity of Caesar worried triumvira former Pompey. Himmanaged to convince the Senate to recall Caesar from Gaul. Caesar had to dissolve theirlegions and brought to justice. Now he stood before a choice - go againstsenate and the republic or to surrender. He chose the first. 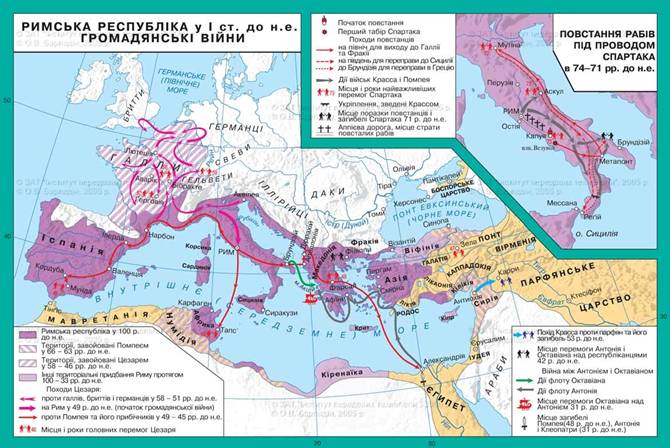 Romerepublic and art. BC Civil War

January 10, 1949 BC Caesar ledone in ten of his legions to cross the river Rubicon, which was abroadbetween Gaul and Italy, and began to struggle with Pompeii.Thus began a four-year civil war. Pompeiihad far more troops - 17 legions and the large number of smallgroups. But Caesar's army was more disciplined, it continuouslyreplenished with recruits. Pompeii was unpreparedresist Caesar left Rome and crossed into Greece. Caesar without interferenceentered the capital. Power weapons faithful legions forced him to declare the Senateits dictator. But Caesar had unlimited power. The Senate remained fairlyweak.

Caesar, unlike SullyNot dealt withtheir foes, the increased number of supporters. Moreover, he resumedpeople's rights are persecuted for Sully. ShortlyCaesar led his troops on the east coast of the Adriatic Sea, where concentratedPompey core strength. In the battle on the plain Farsal Caesarmanaged to win. Pompeii fled, leavingtroops. Julius Caesar pursued his enemy until the Alexandria of Egypt, wherePompey was murdered on the orders of the king of Egypt Ptolemy XI.

But in the land of Egypt at this time began an uprising against the Romans. The entire winter48/47 years BC Caesar's army was surrounded and led heavyfights. Only in the spring of Roman dictator managed to win. Seizing the capitalEgypt Alexandria, Caesar proclaimed Cleopatra queen of country VII, sisterloser PtolemyXIII. Then hehad to quell rebellion Eupator king Parnach in Asia Minor. The war was brilliant. Caesar,informing the Senate of the victory, wrote: "came, saw, conquered!"

After returning to Rome, Caesar gave the people money andVeterans - Land. He increased the number of senators in 3 timessharply reduced their influence in society. It was released laws aimed atorganizing life in the provinces to limit luxury. Assured his power, Caesarlightning attack overcame his enemies in North Africa and SpainJust four celebrated triumphs - Gallic, Egyptian, Asian andAfrican.

In 1945 BC Caesar had to face with the sons of Pompey, whocollected a large army and came against him. Last battle of civil waroccurred near the town of Munda, where Caesar won another victory. For nothingprevented him from being sole ruler of all of Rome. The Senate andPeople's Assembly has not had much impact on the life of the country, although formallyannually elected Caesar consul. Caesar as a sign of his greatness to appear beforepeople in purple tozi winner, the throne on which he sat was madeof gold. His friend Mark Anthony even offeredCaesar proclaimed king. This provoked opposition senators and became an occasion forassociation of its enemies. Caesar was killed right on the March 15 Senate meeting1944 BC

The Romans gave the highest honors dictator - Caesar's body burned in the forum.Thousands of Romans, Caesar grateful for the generosity, throwing in his funeral fireweapons and jewelry. Caesar left a mark on the history not only as governor,but as a reformer calendar (known Julian calendar), builderwriter and author of many cruise expressions ("the die is cast", "crossed the Rubicon").

He sat down, and the conspirators surrounded him as if to welcome.At once Tulliy TsymbrThattook CEBe first role, came to himcloser ... grabbed his toga above the elbow. Caesar cried: "This is violence!".And here is one Cass, Rozmahnuvshys behind, causing himbelow the throat wound. Cesar grabs Kassia hand,it pierces a lead, trying to get up, but the second blow of his stops.When he saw that on all sides aimed daggers at him, he threwtoga on the head ... He was struck 23 blows, only the first, evennot cried, but zastohnavshy ... Mark BrutusThatrushed upon him, said: "Go, my child?"

2. What in the narrative showsJulius Caesar's courage?

Yet for the life of Caesar proclaimed his successor nephew Gaya Octavia (63 BC- 1914 BC). The wordthe death of Caesar 19 years Octave gotexile. The dictator gave him not only a great state, but 3 / 4 of his property.1 / 4 of property intended Caesar the Roman people. But Caesar's legacy reachedformer friend and associate of the dictator Marco Antonio, who after the deathCaesar's Senate, which restored its authority, proclaimed ruler of the state.Octavian asked Anthony to return the money to citizens of Rome, whichzapovidalysya them, but he refused. Octavian sold his inheritance of Caesar,own property and gave money to the Romans. This caused people to capture andcontributed to the popularity of Octavian.

2. The second triumvirate anddeath of the republic

Under pressure from the legions of Caesar, who did not want war between his twoheirs, Antony and Octavian had an alliance. They joinedone of Caesar's military commanders, the governor in Spain Lepid.So in 1943 BC arose secondtriumvirate. Backed by legions triumviry forced the Senate to give themauthority to reform the life of the state. Again, once Sulla,his reforms, they began to fight against supporters of the republican systemproskryptsiyi and released. Among the prisoners was more than 200 senators and 2000riders. Some of them got to proskryptsiy only because they had a lot of moneyor beautiful estates. Rome was panic-stricken. Declared enemies, the Romansburied in wells, sewage, smoke. They do not trust anybody, because atThey hunted relatives, neighbors and even their servants, willing to acquire lands andproperty. In these terrible days of death at the hands of hired killers one of the mostpoliticians and speakers Mark Tulio Cicero.The confrontation of different forces - and the Republican supporters of the dictatorship, andenmity between themselves triumviramy Rome again thrown into the maelstrom of civil war.

In 1942 BC triumviry in the Battle of PhilippeMacedonia defeated a large army, which gathered Caesar's killers Brutus and Cass. Kassia were killed and Brutus putsuicide.

On the eve of Caesar's death took place ostensibly strangethings that the Romans considered a sign of death the governor soon: herds of horses thatHe dedicated the gods and sent during the transition through the Rubicon, refusedfrom food and shed tears, to a room where the meeting was Senatesmall bird flew from laurel twigs in its beak, and behind it - a packbirds, nazdohnavshy it tore to pieces.

At night, many places in the city was billedproskryptsiyni the names of new hundred and thirty persons in addition to previousseventeen, and after a while - even a list of one hundred and fifty other persons.The lists are always extra zanosyly someone already convicted of or wronglydead, all this was done to it seemed that they were killed for legitimatebasis. It was given orders to head for the dead brought triumvirama fee that free-born was about money, but for a slave - inmoney and freedom. All were to make theirhomes to be searched. Everyone who took to his house and hid convicted ornot allowed to search the house, subject to the death penalty. Anyone who wanted couldtell anybody and get rewarded for it.

2. Why do most actively Romansparticipated in the persecution of prisoners?

As a politician he was crafty and heartless, buthiding ambition, behaved decently and kindly.

Tryumviry State and become mastersdivided it between themselves. Anthony received the Eastern Province, Lepid- North Africa, and Octavian - Spain, Gaul, Illyria and Italy. Octavian,zhasyvshy discontent which emerged in Rome in connection with proskryptsiyamy in 1936BC conquered North Africa and removed from power Lepida.And in 1932 BC he began to prepare for war with Mark Antony,who had authority over the eastern provinces, including in Egypt and wasmarried with Cleopatra - queen of Egypt. The couple combined their efforts inopposition to Octavian. September 2, 1931 BC in sea battleShares near the Cape (South Africa) Anthony and Cleopatra's fleet was defeated. InAnthony despair committed suicide. Army Octavian came to Egypt. TsarinaCleopatra was his imprisoned. When she learned that Octavian wantssend it to Rome in chains to streets during the celebration, Cleopatrareleased the snake that fatally stung her. Octavian had killed the son of Anthony- Antulla and the son of Cleopatra and Julius Caesar - Tsezariona.

Civil War ended. In Octavian no longer left internalenemies. The state prevailed peace, but suffered a crushing Republican divisionsimpact. Formally, the Republican establishment has acted, but the power belonged to oneperson - Octavian.

1. What is meant by "crossed the Rubicon?

2. What military campaigns of Julius Caesar made? What valuefor Rome they had?

3. What ended the civil war and what was the fate triumviriv?

4. Prove that a second triumvirate was the beginning of the finaldestruction of the republican regime in Rome.