1. ConstantineGreat. Christianity in the empire

At the end of III - Top IV.Christianity has had a lot of people like that all the time growing.A well-organized Christian communities united to form the Churchorganization of the empire. Communities led the elders (presbyters), ministers(Deacons) and administrators (the bishops). Constantineappreciated the power and authority of the Christian church. Deciding to use thisstrengthening the empire, he moved to the strong support of Christianity. In 313 was Constantineand his ally at the time Licinius in Mediolani (Milan) issued a decree (edict) that Christianitybeen announced with equal with other religions. Property taken from Diocletian Christians were returned to him ormoney paid. It was a decisive step to convert from Christianity drivenon the dominant religion. Christian priests took part in the celebration ofestablishing a new capital - Constantinople.But the Emperor to Christianity shortly before his death. Since conversion ofChristianity became the faith of the emperor universally religion. SinceChristians supported the emperors, the church treated with respect Constantine. Even when Christians later destroyed statueshated them pagan emperor, Marcus Aurelius equestrian monument remainedwhole only because it believed the sculpture depicting Constantine.

One of the successors Constantine - Flavia ClaudiusJulian in 361-363 years briefly returned to paganism and wasnamed Apostate. He forbade Christiansstudy in schools and even a featured speaker himself against them.

Julian died during the war with the Persians in 363 p., and sinceChristians have started to restore its influence on the people of the Roman Empire. However, inremote settlements of cities have kept the old pagan faith.

З 390 was countrypersecution began the destruction of pagan temples and old gods. In 391, theChristian mob led by Bishop Theophilus robbed and destroyedmagnificent temple of the god of the sun in Alexandria.

Then the world culture has suffered perhaps the biggest loss in history- Was burnt Alexandria Library bookswhich retain millennial wisdom of ancient civilizations. How timesinterrupted. 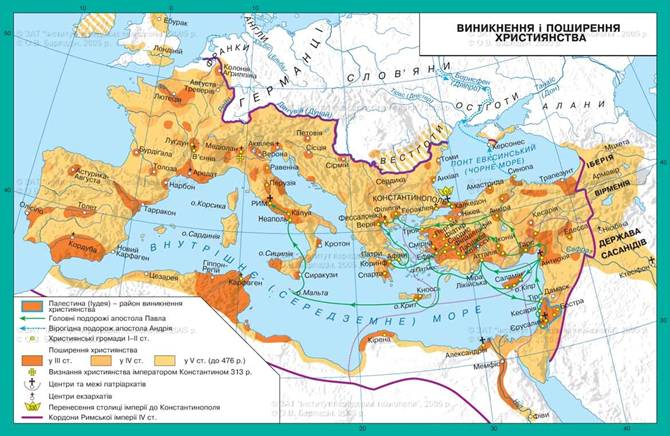 The emergence andSpread of Christianity

Christians are unitedin the community. The greatest commandment of the Christian communities was based ontrue divine love - love of neighbor. In the community all hadequal rights and were obliged to help one another. Community members were consideredbrothers, there were no differences between the various tribes and nations, betweenslaves and free people. In the first community's original generalproperty, and the main rule was "who does not work, let him not eat." Believersbelieved that only the poor and disadvantaged are eligible for a reward in the afterlifelife. In the sermon reads: "convenient camel to go througheye of a needle than a rich man to enter the kingdom of God. "Christians condemnedwealth, so rich people could first become members of the community onlyif they are distributed before all his wealth. Then, from the wealthyonly required to give generous donations to benefit the community. Faith in the secondComing of Christ and a happy afterlife helped improve relations betweenpeople. The messages to the slave owners said: "In your anger do notgive orders to my servant or slave, what hope for the same god ... "Servants have called: "You are the servants, obey your masters, as the image of God, byconscience and with fear. "

Inter-communal relations were established, whichsupported by special messengers: apostles and preachers. Some memberscorresponded communities. The Apostles, as preachers of the new faith becameorganized communities, collecting contributions necessary for their operation.

In some communities the only organization formed Christianswhich was called the Christian church. Church called associationbelievers on the basis of common religious beliefs and rites. At the head of the bishops of the church stood. First, Christians had no specialworship facilities. They met in ordinary houses, prayed together,celebrated the holidays, discussing codes of conduct in life, listening to reading the Gospels,singing hymns to God.

Church - A religious organization that unites people like a particularreligion; building, where the worship.

Due to the increasing number of communities of Christianity in the late II century.confronted with a serious problem. It was intended that the life and deeds of JesusChrist described in the Gospels, Christians understood and interpreted differently.The controversy surrounding the Christian faith there were not only on the pages of booksknown at that time thinkers. They appeared on city streets, sometimes sharingpeople on the intransigence of the group. To establish in all the communities understanding of the teachings of oneJesus Christ and the same ceremonies, the bishops met with the pastors todiscussion of controversial issues.

Joint decision was made compulsory for all. Those who deviate fromapproved procedure or doctrine, was considered a heretic. He excommunicated from the church.

And the Christian church, and emperors, who relied on it, and punishedexiled heretics trying to strengthen the new religion.

In 325 initiated Constantine Greatin Nicaea all bishops was convened for the firstEcumenical Council. It approved the foundation of faith, its characters and sentencedheretics. Since then, the Ecumenical Councils were convened when the need aroseresolve important issues for Christians. 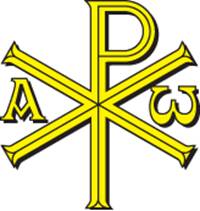 Heresies - Trends in Christianity that deviate fromofficial religion and church have been banned.

1. Why Christianity became the state religion?

2. What is the role of Emperor Constantine to Christianity?

3. What methods are used Christians, confirming their faith?