§ 56. Barbara and Rome. The fall of the Western Roman Empire (textbook)

§ 56. Barbara and Rome.The fall of the Western Roman Empire

As the period of the republic, and during the empire, Rome had many enemies. Andhe always managed to overcome them or restrained. Now, the empire facedthreatened invasion of neighboring nations - the barbarians.

Romans first realized the danger in the II century barbarians. BCwhen they ran on the northern borders of the empire and Teutons kimvramy.Particularly ominous was that the soldiers moved into the territory of the Empirewives, children, pathetic treasures. Then Rome managed by umilostiand reformed the army commanders to stop the barbarians in advance inland.

At the beginning of a new era of Rome's largest number of neighbors were Germans - Frank, Goths - Western (Visigoths) AndEastern (Ostrogoths), Sachs, Angles, Lombards and vandals. These tribes did not knowstate. The governing bodies of them were in the Council of Elders, the leader and National Assembly.Council of Elders distributed land, decide controversies between members of the tribeetc.. In the hour of danger tribe defended armed units led by the chief.The government stuck to the military leader on the authority and power. He rozpodilyav land andprey. Leader on a par with other members of the tribe. Although there were exceptions and, whenchiefs ruled their tribes as true kings. 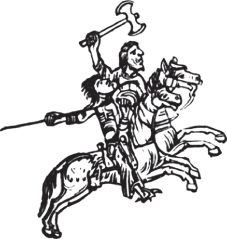 For attacks on the border territories of the Roman Empire, barbarian tribesformed powerful alliances. Weakened empire was forced to conclude with the barbarianspeace agreements, to provide them land for settlement, recruit legions of them. And evensome Roman commanders at that time had barbarian origin. In the secondhalf III. beganmovement of huge masses of barbarians, which scientists call "the Great Migration.

Migration, which changed the world map and shrank overIV-VII centuries. Was caused by the emergence in Europe Hun. This powerful and mysterious people come from the bordersAncient China, having won tens of thousands of kilometers. Rapidly advanced to the HunsEurope pidkoryayuchy territories and peoples, and enhancing its power. Fearinvasion of the Huns forced the tribes that inhabited the territory of Europe, leave their landand find safe locations. Those who dared to resist were subduedHuns and with them moved up closer to the borders of the Roman Empire.

In 375 p., fleeing the Huns, permission to settle within RomanEmpire asked Visigoths. Emperor Valens agreed to provide land in Thrace (eastBalkan Peninsula) and promised to feed them for a while. For this Visigoths obligated to serve in the Roman army.Roman officials violated the agreement and the barbarians have not received enough foodnutrition. Suffered from hunger and appalling conditions Gothsled by its leader Alavivom rebelled.Rebelling against the imperial army left. In 378, the nearAdrianople was the decisive battle. The Romans suffered a crushing defeat. Amongtens of thousands of people were Roman emperor ValensIIand 35 of the platform. Only a third of the Roman army managed to escape andfoothold in Adrianople.

Several times Visigoths unsuccessfully stormedcity. Then they went deep into the Balkans, hoping tohelp fellow-legionnaires. But one of the commanders of the imperialArmy - Julius commanded to kill vsihhohiv-legionnaires.

In general, the Romans, trying to protect themselves from attacks of barbarians,applied them to a policy of "divide and conquer". They pidkupaly leaderstribes, provoking war between barbarians, some provide land within the empire.All this helped to curb the onslaught of barbarians Rome. And this time to fight Visigoths Romans hired the Huns and other tribes. Themto stop Visigoths and for a time to unitestate under the rule of Emperor Theodosius. But after his death, the state againdisintegrated. In 395 was onterritory once united Empire was formed two states: Western Roman Empire of capital Rome й East - Ofcapital in Constantinople. LaterEastern Roman Empire became known as the Byzantine Empire - from the name of Byzantium.

У 401 was WestThe Roman Empire has failed to respond Visigoths onled by their leader Alarihom (бл. 370-410's)and had vidkuplyatysya of barbarians. And when 410 was Rome refused to pay, Alaric August 24 through servants who openedcity gate at night, captured "eternal city" and criticized his devastating robbery.Visigoths three days plundered Rome, but not init, and went to the Roman province.

Meanwhile, other barbarian tribes - Vandals, svevyAlans and took other provinces once mighty empire. Under the rule of barbarianswere south of Spain, and in 429 was - African province.

40 years after the invasion of tribes Visigothsthe territory of the Western Roman Empire invaded the tribes of Huns. Back in 377, theThese nomadic tribes encamped in the province Pannonia.Roman Empire for some time kept in subjection of the Huns, barbarians paying King Rwasa 159 kggold annually and holding hostages.

In 40 years of the V century. became the leader of the Huns Attila (?–453 p.). Nephew RwasaHe was held hostage by the Romans and well-studied lifeRome. Brave and talented military leader, ruler hunskyy dreamed of winningworld. He became famous robbery and violence, as Christians called him"Scourge of God". Attila united under his authorityHun tribes and attacked first on the Eastern Roman Empire. In 447, the histroops came to Constantinople and the emperor was forced to pay hugeredemption.

It tells the legend, once in Pannonia(Now Hungary) to Attila shepherd came and broughthis sword, which is found on pasture. The chieftain of the Huns, took sword in hand, said: "Longthis land was sacred sword, and here the gods gave it to me to winall the peoples of the world. "

У 451 troops Attila invaded the land of the Western Roman Empire inGaul, and was besieged city of Orleans. Visigoths,who owned this land, turned for help to Rome. When it seemed thatthe city may save only a miracle came to the aid of Roman troops led byFlavia Aetsiyem and King Visigoths Teodorihom. Siege of Orleans was shot.

To confront a powerful enemy, his forces joined the RomansFranks, Visigoths, burhundy,Alans, Saxons. A decisive battle between the Allies and the Huns on the side of which were Ostrogoths and Sarmatians took place west of the city TroisOn Katalaunskyh fields.Sometimes the battle is called "battle of nations." She was one of the bloodiestbattles of antiquity in Europe. It killed about 62        thousand soldiers. With courage vesthotskohoKing Teodoriha and stability of the Roman infantry battlewas won. Defeated army Attila left borderRoman Empire. In 453, the Attila died aftertheir wedding. His government collapsed. 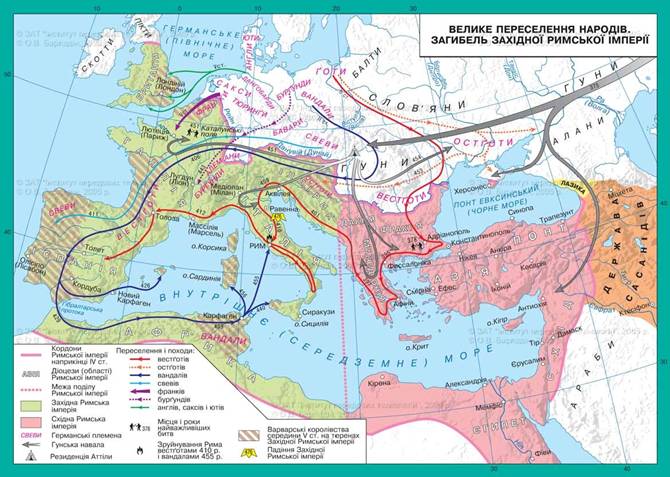 GreatMigrations. The death of the Western Roman Empire

Western Roman Empire, which survived the war with the powerful Huns soonVandals attacked from the territory of North Africa where they established a powerfulPower, headed by King Heyzerihom. Seizingisland of Sicily, the Vandals into an easy springboard for attacks on Rome.In 455, the they were once inaccessible to the enemies of Western capitalRoman Empire. Two weeks they robbed and destroyed Rome. Thousands of residents"Eternal City" died protecting their homes, thousands were turned into slaves.It was destroyed cultural achievements of many generations of peoples in the empire, destroyedarchitectural grandeur haughty Rome, lost works of art. Sinceconcept of "vandalism" take when it comes to senseless violence and destructionheritage culture.

But Rome has not yet been defeated. In 468, the Roman fleet, whichconsisted of 1100 ships, met near the African coastNavy Heyzeriha. Taking advantage of errorsRomans and applying inflammatory vessel, the Vandals won.

Since zahidnarymski Emperors were no longerreal power. They controlled the barbarian chieftains. Symbolically, the lastemperor as the legendary ruler of Rome, had addressed Romulus.In 476 Romulus Avhustulaleader stripped of power Ostrogoths Odoacer,and its symbols of power sent to Constantinople.

1. Who and why the Romans called barbarians?

2. How goes the notion of "vandalism"?

3. Compare the life of Romans and barbarians.

4. When the defunct Western Roman Empire?

5. What causes the fall of the Western Roman Empire?

6. Why do you think the Roman Empire collapsed?