§ 25. German States in the XVIII century.

1.What were consequences of the Peace of Westphalia to the German lands?

2.What German states were the largest and most influential?

Peace of Westphalia (1648) will affirm the fragmentation of Germany. In Germany There were about 300 principalities, 51 free city and almost 1,5 thousand independent knight possessions. All these states were united in Holy Roman Empire of the German nation. But the real power of the emperor extended only to family ownership. Elected Emperor of the Austrian dynasty Habsburg college Elector of 9 - the largest German princes.

Zahalnonimetskyy Reichstag (representative body), who sat in Regensburg, also had no real power. In Germany there was not a single army or joint finances. Each prince behaved like an absolute monarch. They built luxurious palaces, kept a large army, and it required considerable resources. To recharge Treasury princes establish high tariffs, increased taxes on their subjects, and even sold їх other States for military service.

In Westphalia peace, France and Sweden were the guarantors of order Holy Roman Empire German nation. A large number of principalities located to hold these above countries as well as England. The largest empire states were Austria, Brandenburg-Prussia, Saxony, Bavaria.

Under these conditions primary source of income for the German States was a land where grown single export commodity - food. Princes under the rule of feudal relations of to increase production of marketable grain zhanyaly peasants from their land, expanded the area of arable land, increased serfdom. Thus, in most German principalities were prykriplennya peasants to the ground. The decline of trade, craft, and accordingly - cities led to the preservation guild system with its regimentation.

In the first half XVIII century. economic life in German lands pozhvavishalo something. But economic rehabilitation center was not in the cities and in rural areas. Here, the first manufactory - scattered type. Farmers who earned at subsistence artisanal fisheries, were combined with the market through entrepreneur-fence.

3. The rise of Brandenburg-Prussian state

After Peace of Westphalia basic knowledge of Brandenburg Elector consisted of four parts:

Prussia (to 1657 was in vassal dependence of Poland);

Duchy of Cleves, situated on the Rhine.

The main reason rise of Brandenburg-Prussia was the economic decline of southwestern parts of Germany as a result of moving the main trade routes Atlantic Ocean and devastation after the Thirty Years War. Because land Brandenburg-Prussia lay the main trade routes (Primarily rivers) from Germany to the Baltic and North Sea. So, almost all meat and intermediary trade with England and Holland ended up in the hands of the Elector of Brandenburg.

Particularly rapid strengthening the process of Brandenburg-Prussia was held by the Board of Elector Friedrich-Wilhelm (1640-1688 biennium). He was an able military leader and politician, was acquainted and on commercial matters. Proclaiming in their possessions and privileges tolerance for immigrants, Elector has made a significant migration of skilled labor: French Huguenots, Dutch, Germans from the south-west. Launched the construction of canals, inning, raising amount of land suitable for crops growing and improved trade relations with England and Holland. In trade and industry policy was carried out mercantilism (to protect the domestic market).

Introduced in government factory. Even prisons have been converted into workshops. Not to be moved coins (silver, gold). Natural tax replaced money. Tax system was organized. The civil service laid down by strict discipline. All these measures helped create a strong financial system and a strong army (30 thousand soldiers).

In 1657 Friedrich-Wilhelm achieved termination depends Prussia vassal of Poland. His son Friedrich and(1688-1713 biennium) for participation in the War of Spanish Succession on the side of the Emperor received from him the title of King of Prussia. This event subsequently has reason to Prussian kings to expand their knowledge, to expansion - to capture foreign knowledge to compare their size and power of the grandeur of the Royal title.

For these plans should have a large army and consequently, significant funds for its maintenance. So King Frederick William I(1713-1740 biennium) during his rule introduced strict economy: reduced to a minimum number of courtiers and the royal family costs, reduced pensions noblemen, gathered his father sold jewelry, has created a strip military locations where armed colonists settled, for which the main reward for service was the land itself. Through these measures the number of troops were brought to 80 thousand in the army nasadzhuvalasya strict discipline (The famous Prussian drill "). The King himself often ardent beat officers and officials for misconduct.

But science and Arts degraded. Philosopher Wolff threatened executions were driven from country. Even her own son Frederick emperor chastised and persecuted by take up music and literature. Somehow, even then the son of King was sentenced to death. Finally, Frederick William I forgive his son. He appointed his first clerk, and later - the commander of the regiment. Frederick II not only in good faith hosted service, but also fascinated by the art of war and became one of the major commanders in Europe.

Friedrich II (1740—1786 years) continued the policy of his father to increase the possession of Prussia. He immediately entered the war against Austria (War of the Austrian Succession1740-1748 biennium) and captured most of Silesia. 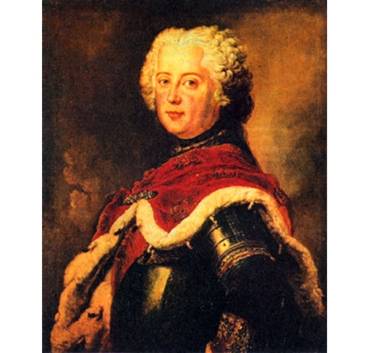 In 1740 died Austrian Emperor Charles VI. Even during his life was made law prestolonastupnist (Pragmatic sanction), which proclaimed the indivisibility possessions of the Habsburgs, and the devolution by women when absence of male heirs. The price of territorial concessions to Charles VI the recognition of the pragmatic sanction of European monarchs, but once after his death Bavarian Elector deny the right of Maria Theresa inherit the throne of his father. Finally, the war in which against Austria made by Bavaria, France, Spain, Prussia. Austria supported the United Kingdom. War ended with the signing Ahenskoho Peace (1748). Maria Theresa defended your right, but Austria lost Silesia. This subsequently led to a new war - Seven years (1756-1763 biennium).

Revolutionary War Austrian Succession turned in Prussia influential European country. Friedrich II cherished new aggressive plans. In 1756 He formed an alliance with England, which is no longer considered Austria as contrary to France in Europe. However, Austria has signed an alliance with France. Yes Europe formed two coalitions, contradictions between them developed into Seven-year war (1756-1763 biennium).

Frederick II sought to break the opponents one by one. In 1756 Frederick II was no declaration of war had fallen upon Saxony. Austrian army, which went to the aid of the Saxons, was defeated. Russia, not wanting to strengthen Prussia regarded these developments as a threat to its own interests, and declared it a war. Russians inflicted several defeats Prussian army captured the city of Koenigsberg - capital of East Prussia (1758). But the Russians were still hesitant, which gave Friedrich II to inflict defeats of France and Austria. Next year in decisive battle near

Just then died Russian Empress Elizabeth, and on the throne, Peter III (Duke holshteynskyy), who stopped the war against Prussia and entered into alliance with her against Of Denmark on behalf of the Duchy of Holstein. Catherine II, which went down in the kingdom after the murder of Peter III, broke an alliance with Prussia against of Denmark, but continued a policy of Prussia.

Seven-year war is not changed the map of Europe. Prussia could not make their aggressive plans. But in Germany, Prussia war raised the level of Austria. It enabled France and Russia to become the arbiter in disputes between them. A contract for 1779 Russia became the guarantor of the Peace of Westphalia. Therefore, the process of German unification was delayed by more than 100 years. But Frederick II did not abandon attempts to increase territory of Prussia. In 1772, he, together with Austria and Russia took part in first division of Poland. Then Frederick returned to his capture literature and art. He wrote many musical compositions and letters to philosophers. In early August 1786 Frederick decided to hold a review his troops in Potsdam, which was the old king farewell. During examination rushed shower; Friedrich a cold and soon died.

With the name of Frederick II is associated Enlightenment period in German history.

Friedrich II, the young years following that time in fashion, was a supporter outstanding educator Voltaire, corresponded with him even summoned. However, the last being at the court of Frederick II quickly realized that Enlightenment ideas capture the king was superficial. He wanted only one - to increase the territory of Prussia. All activities, although they sometimes coincided with the ideas of the Enlightenment, were directed only to draw attention maintain and improve military-economic structure of the stateTo be able to hold 150 thousand troops.. To this end, the king declared complete tolerance. It was printed collection Laws of Frederick Code "which zaprovadzhuvavsya equal for all and independent court overturned torture. Frederick also concerned with the development Farming and industry (especially military). Open banks built canals, roads, carried out considerable construction in Berlin and Potsdam.

Making reform, the king did not change social structure. Nobles remained the ruling class. He believed that the nobles - the only support the Army and Army - the main thing.

For improve the situation landlords peasants He spent a small reform in Pomerania: huddle forbade peasants from the land and take away their hopeли. Frederick II was afraid that changes in peasants abolish its army recruits.

However, the situation state peasants improved. They got the right to own land and send it inherited. This reform was a desire that the country is decreases the number of those who pay taxes.

In education, he took care of the development of higher, partly - average. In 1763, it was introduced general compulsory school education, but the quality of education in primary schools was too low. These were the major reforms undertaken by Friedrich II.

1. Letter of Frederick II to the French philosopher Voltaire

"Germany is now France recalls the days Francis II develops a taste for literature: need time to nature presented to the world's geniuses, as in the period of Richelieu and Mazarin. The land on which Leibniz was born, and can give birth to others like him.

I do not see these beautiful days of my Homeland, but predict that they will. You tell me what you all this care and that I can provide any amount, increasing as possible, the duration of his prophecy. However, I expect this is what I say you this with confidence because no one can refute me.

Personally, I console themselves that lived during the Voltaire: This to me is enough. Let him live, thinks, is in good cheer and, especially, may not forget hermit of Sanssouci.

1. What Friedrich II expressed hope in the letter?

2. With the congregation of Frederick II compiled January 8, 1769 р.

"I lived a philosopher and I wish to be buried as so, no glory, no commemoration, I want me anatomuvaly not balzamuvaly and buried in Sanssouci, the upper terrace in the tomb, which I prepared.

I have never been neither miserly nor rich, I had large amounts - to state revenues, I watched as the holiness, to touch is not entitled to any wicked hand, earnings have never received public for my own use; my board also does not violate my conscience and I never refused to make a report about it to the people.

My last wish, in my moment of death, will be used to benefit the state. Let it run always with fairness, wisdom and firmness, it shall be the happiest with their soft states laws, the most fair finances, most valiant soldiers and let it live and bloom in ages!

2.What internal politics of the German princes held?

3.What dominant trends in the economic development of German lands in the XVIII century.?

4.What impact the development of German agriculture land?

5.What were manufactury features of production in the German lands?

6.What caused rise of Brandenburg-Prussian state in the XVIII century.?

8.What role played War of the Spanish and Austrian heritage in the development of Prussia?

9.Prepare a story about domestic and foreign policies of Frederick II.

10.Name features of the German Enlightenment.