§ 26. Possession of Habsburg Austria in the XVIII century. (textbook)

1.What were consequences of the Thirty Years War to the Habsburg?

1. The control system of the Habsburg Empire. Economic development

After Austrian Habsburgs Peace of Westphalia, which, as mentioned, were emperors of the Holy Roman Empire of the German nation, possessed archduchy Austria Shtiriyeyu, Tyrol, north-western Hungary, and more number of areas. By the end of XVIII. Habsburg possession have increased significantly. Habsburgs, though defeated in the Thirty Years War, nevertheless remained one of the most powerful rulers of Europe. The peculiarity of the Austrian possessions Habsburg was that, except Austrians lived here Czechs, Slovaks, Croats, Hungarians, Italians and others. All people talked in different languages, have distinctive culture and customs. Each of the land holdings Habsburg lived by their laws, had its own treasury and its Chief Minister - Chancellor kept a class-representative assembly (commit) of the local nobles, clergy, townspeople. Act with asserted taxes population. Habsburg monarchy for convenience referred to Austria, although at that time Austria was only one of the ingredients state which is called "Hereditary holdings of Austrian House of Habsburg.  The Catholic church had a tremendous impact. Protestants persecuted.

Austria emergence as a multinational state was associated with aggression Turks in Europe. Austria was the same barrier that his Turkish troops to overcome, although they have repeatedly taken in the siege of Vienna. Most recently happened in 1683 With help from the Polish king, the city was saved.

Economic development of individual holdings was different. The most developed was actually Austria and the Czech Republic, the most backward - Tyrol and Hungary.

In Austria and the Czech Republic developed craft shop, create manufactory.  Metallurgy and processing metals were the leading industries. City of Vienna at the end XVII Art. had more than 100 thousand inhabitants. The Government implemented a policy of mercantilism contributed to the development of their own industry, especially the military. Forbidden repatriate coin, limited importation of goods.

Agricultural Relations distinguished extraordinary diversity. Thus, in Tyrol, hill farmers have been personally free; in the Czech Republic, Hungary, Slovakia farmers were kturniping; In Austria –   actually free. Depending on the situation of peasants determined and their duties - from handling money to serfdom.

2. War of the Austrian Habsburgs

Losses and the beginning decline of the Ottoman Empire contributed to the expansion and strengthening of possessions Austrian Habsburgs. Thus, in 80's they possessed nearly all Hungary. Decline of the Spanish Habsburg Austrian turned on significant factor in European politics. Austria joined the fight against the French hegemony (domination) in Europe.

In 1701 War broke out the Spanish Succession. Austria gained the Spanish Netherlands (Belgium), Neapolitan kingdom, the island of Sardinia and Milan. Austrian Habsburgs reached the highest power. Next 30 years were severe for the state. Constant war against France, Spain, Turkey exhausted her, she lost many possessions. Habsburg Empire started to weaken. New kick looked at it from Prussia.

Along with external rose and internal problems. Thus, in 1679-1680 he the strength of battle rebellion in the Czech Republic in 1703-1711 biennium - The Hungarian uprising led Rakoczy, both failed.

After the death of Charles VI in 1740 in the Holy Roman Empire was heir to the throne by male line. Successor of the emperor according to the pragmatic sanction was its 23-year-old daughter Maria Theresa. Maria Theresa had to immediately join the fight against pretenders to the throne (War of the Austrian Succession). Despite the predicament, she managed protect their right. 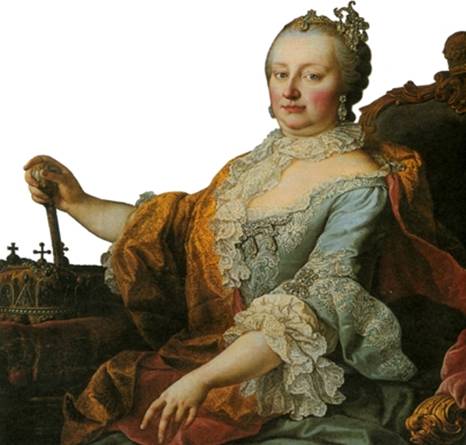 For the whole 650-year history of the Habsburg dynasty, Maria Theresa was the only woman on the throne of the empire. Her intelligence, education, natural abilities to fascinate and friends and enemies. The Prussian King Frederick II, who was one of its main enemies had to admit that it "... makes the honor as his sex and the throne that his ranks. Most of the board Maria Theresa was associated with wars: first, she was forced to defend their right to the throne in the War of Austrian Succession (1740-1746 biennium), then participate in seven-year war (1756-1763 biennium) and in the War of Bavarian heritage (1778-1779 biennium). It is involved in these wars and led to the Empress reform its army. Big changes were made in the internal life Empire. Maria Theresa had 16 children, the most famous of which were Marie Antoinette - Queen of France, executed with her husband Louis XVI during the French Revolution of the XVIII century., and Joseph II, who replaced his mother on the throne.

Maria Theresa initiated reforms in the Empire in the spirit of enlightened absolutism.

Should Note that almost all the reforms carried out by Maria Theresa, were conditioned its desire toidstoyaty єance of their WallOdin. To strengthen the central government created the State Council and the central court, so all the fullness of power concentrated in the hands of the Empress. Austria and the Czech Republic were on`united under power of one chancellor.  To successfully wage war against rivals was carried out military reform. Recruitment of mercenaries to replace recruiting sets, enabling the Army to increase from 108 thousand to 278 thousand soldiers. Was unified tax system - introduced a general income tax, that it paid all strata of society. Abolished internal customs boundaries. Farmers gave the right to buy their plots, restricted three serfdom days a week. It was issued a civil (Terezianskyy Code) and criminal (Terezianska Nemesis ") codes. Implement activities to promote education: it introduced the general educational school and is separated from the church.

Much greater for reform reached a son of Maria Theresa Joseph II (1780—1790 years). He was educated and intelligent man, brought up on ideas education. Joseph designed a broad program of reforms, which in the opinion of the emperor, were more prone to make life better. He resorted to further strengthen the central government. The value of formed the provincial assembly, enhanced power ChancellorWho are appointed by the emperor, all the rights urivneno landand in the courts and the administration put German. 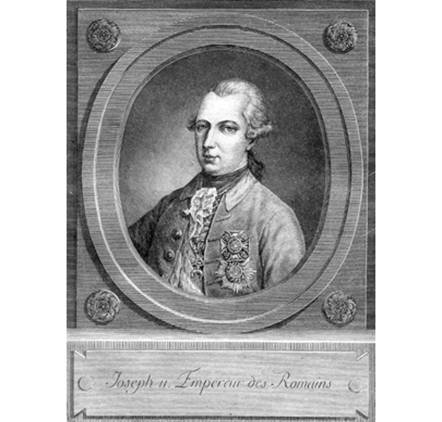 Important reforms have become church. Joseph sought to conquer the church and weaken its impact on society. He decided to papal decrees and regulations made public only with the consent of the government, and monastic orders were being local bishops, reduced the number of monasteries and monks. Confiscated land and property was sold, part of the proceeds to the development of education. Religious schools were reoriented to secular learning and subordinated "Higher education commission. After all, he dared to interfere in the internal structure of the Catholic Church and even changed some of the ceremonies. During his rule issued a new collection of laws (a lawyer of Joseph "). In 1781, it was canceled the peasants' personal dependence.

Conducted by Joseph II reforms have created a broad opposition movement. Peasant reform were dissatisfied with the landowners, especially Hungarian. Religious - caused a conflict with Pope and the rebellion in Belgium. Administrative - sharpened the contradictions between the peoples of the empire. Finally, the end of his rule he canceled his reforms, but farmers and imposed religious tolerance. "I had the misfortune to see how all my plans to grow old" - said before the death of Joseph II. Ukrainian historian Ivan Krypiakevych called it reformer of science fiction that does not take into account the real relations.

Emperor Joseph II as King of Prussia Frederick II and Catherine II of Russia, was one of the most prominent representatives enlightened absolutism. He tried to realize those ideals, who so happen to like him, but prove it deeds could not. "In his clever head - said of Joseph, King of Prussia Frederick II - but, Unfortunately, it often makes the second step without finishing first.

1. From the letter of the Prince de Lin Empress Catherine II

"It is no more hosudarynya, it is not more, sir, that did honor to all people, and a man who did more honor all the sovereign. This fiery spirit extinguish a fire like that up, and it energetic body is trapped among the four boards which do not let him move. I was one of those four, who spent his precious ashes, brought his Capuchin monastery to ... Joseph II died steadily as he lived: the spirit of methodical not left him no beginning or end. He led the procession, which should accompany the Eucharist that brought him to death Odra. He went up to see if everything was as he ordered ...

On the rest, hosudarynya, I say, shame humanity that I have seen four great monarchs of death: of them begin sorry just a year after their death, the first six months of hope and the rest - criticized. The same was when Maria Theresa died. People awry realize a loss they suffered. Inquisitive, indifferent, unthankful intriguant taken over by the new reign. Only a year traveler says: "What a wonderful construction of schools, hospitals, prisons and education. " Manufakturyst: "What encouraging. " Farmer: "He worked himself. Heretic: "He was our protector." Chairman of the heads of all departments and all agencies will say: "He was our first officer while our leader. " Ministers: "He killed himself for state, the first subjects to which, he said, he was. " Patients say: "He constantly visited us. " City residents: "He decorated our town squares and boulevards. Farmer and servant also say: "We spoke to him when wanted. Parents of families: "He gave us advice." His entourage will say: "He was a devoted, gracious, he pleasantly said, his conversations were that zapam'yatovuvalys; with him can truly say everything. "

1. How represented and evaluated as Joseph II, Prince de Lin?

2. As you rate the person of Joseph II and his reforms? Answer atґruntuyte.

2.Which system management existed in the empire?

3.Describe economic development of the Austrian Empire in XVII-XVIII centuries.

4.Who led the war Austria during the XVII-XVIII centuries.? What impact have these wars for the development Empire?

5.What led to reforming of Maria Theresa? What are the main results of the reforms?

6.What reforms have been by Joseph II?

8.What is Pragmatic sanction the role it played in the history of Austria?

9.What causes conflict between Austria and Prussia?