Having a coup,Napoleon concentrated in their hands thisexecutive, which was not even Louis XVI under the Constitution in 1791 he was convinced that the country needsstrong government that will ensure its greatness and prosperity, the citizens willorder and stability, help spread the ideals of the new France in the world. 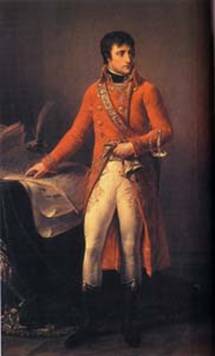 In France, the established formBoard, which later was called Bonapartism. Napoleon ruled forthe big bourgeoisie and peasants enjoyed the support of owners, who hopedit protects the country from Bourbon restoration of power and provide an opportunityobtained to use the land in years of Revolution. Napoleon paid much attention todevelopment economics, public administration and legal system. It waslaws, which confirmed the ownership of property acquired duringrevolution. The government promoted the development of industry, providing favorable stateorder businesses. Napoleon made the reform of the financial system, duewhich a new stable currency - franc. The country opened buildingwork. In urban areas appear new boulevards, bridges and buildings. All this contributedacceleration of the industrial revolution in the country. The level of industrial production in1810 increased to 50% before the revolution.

At the same time againstthose who were dissatisfied policy Bonadesk,used brutal measures. The country has a huge numberthe police agents. 60 of 73 newspapers were closed and those remaining wereunder strict supervision. Criticism of government policy was forbidden.

To strengthen its position Napoleon made an agreement(Concordat) with Pope Pius VII, where Catholicism recognized religion of France. Catholic Churchpledged to support the first consul.

Napoleon tried to draw ontheir side and part of the old nobility. Emigrants have received amnesty (forgiveness) andright to return to France. Those who came back, got back unsoldestates.

In 1802 Napoleon became lifelongConsul, and another two years was solemnlyproclaimed "Emperor of the French" Napoleon I. In 1808 the word"Republic" to replace the word "empire". In thisway the French monarchy was restored. Some Republican establishment -universal suffrage, legislative chambers - were kept, but no significant roleplayed. Lawted power wascompletely subordinated to the executive, which concenredyv in their handsemperor. In fact, nothing in France is not limiting its power. Localgovernment was significantly restricted. The authorities in districts and communes that theydivided into departments, belonged to the designated officials. 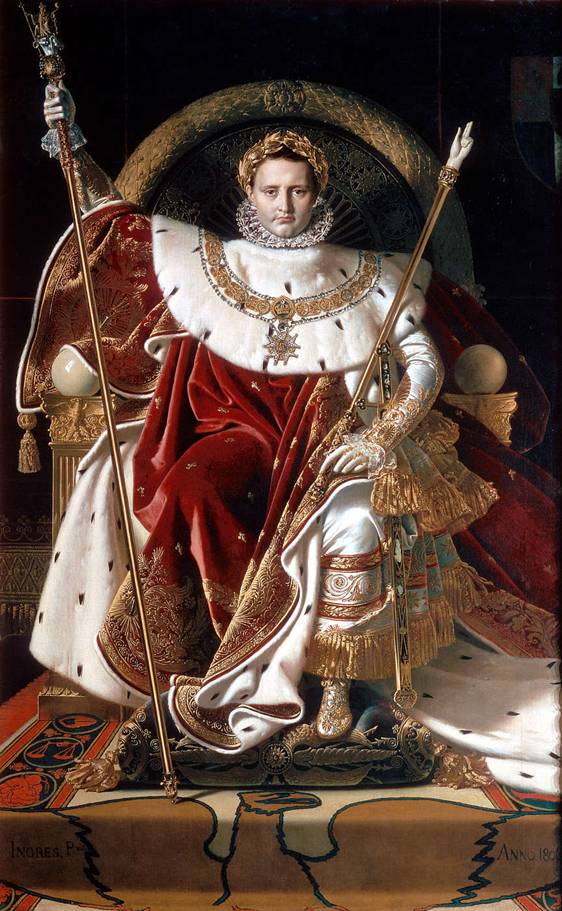 Napoleon I - Emperor of France

У 1804, 1808, 1811 pp. was issued by the Civil, Criminal and CommercialCode (Code,) which is commonly called the Napoleonic Code. Theywere much more progressive than the legislation of feudal-absolutistcountries, for embracing the best position of legal systems of different periods.Codes proclaimed equality before the law, privacyproperty and person, freedom of religionsion."My true glory is that I won 40 battles ... - said subsequentlyNapoleon. - It may forget and will live forever my Civil Code.

In general, laid the legal codesbasis for new stormsbourgeois propertyrelations, inheritance and family law, the relationship between employee andentrepreneur. Napoleon distributing the action theirCodes in the conquered countries - Holland, Italy, Germany landsDuchy of Warsaw. It played a progressive role in developing thesecountries, because the eroded remnants of old ordersand laid the legal foundations of bourgeois society.

The principles enunciated French Revolution, and norms, which then livedthe rest of Europe, were absolutely opposed. However, not only New Francedefended their right to develop in the chosen direction, but also tried to extendtheir ideas outside the country. After the firstmilitary successes she endured the fighting into neighboring states andstarted perekroyuvaning the political map of Europe. The purpose of externalPolicy of Napoleon, who combined in one person and an outstanding statesmantalented military leader, was of French political and economichegemony (dominance, dominance) in Europe. None of the anti-Frenchcoalitions could not resist FrenchArmy, which was the first standing army in Europe. It consisted mostly of free peasants whoreceived the land or have waited to get it, not mercenaries, as inmost other countries. Headed ITStalented commanders assigned to positions through exciting andNoble is not the origin.

When Napoleon became first consul, he made in1800 second Italian campaign in order to gain revenge for defeat in 1799was Its result was the defeat of AustriaFrance obtained Belgium, land on the left bank of the Rhine and in factprevailed in Italy.

Much more difficult was the struggle against England '. In 1802 left without allies, it signed a peaceagreement with Francethis, but because yearwar renewed. For the invasion of England in 1805 Napoleon gathered on the shores of the English Channel 130,000th army and2300 vessels for landing. But the English fleet at Cape Trafalgar, led byAdmiral Nelson defeated the French and Spanish fleet. WarFrance lost at sea, and this is doable added its old enemies. When Napoleonlearned of a third anti-French coalition (England, Russia,Austria, Neapolitan kingdom), he abandoned plans for invasion and moved to England with the army to Germany. 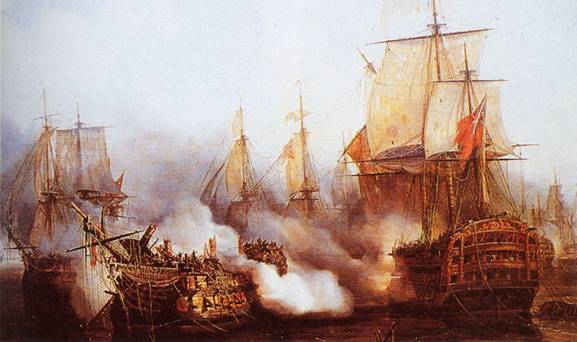 In December 1805by Napoleon won a decisive victory over Austrian and Russian armies in Austerlitz. Austriawas forced to recognize that freedom of Napoleon Action in Italy, Germany, to agree to the annexation of hisVenice. Napoleon announced the elimination of the Holy Roman Empire. In 1806 p. French opponents of the band joined Prussia thatcaused the emergence of fourth anti-French coalition. The French had invaded thePrussia and for 19 days completely defeated Prussian army in the Battle of Jena andAuershtadta. 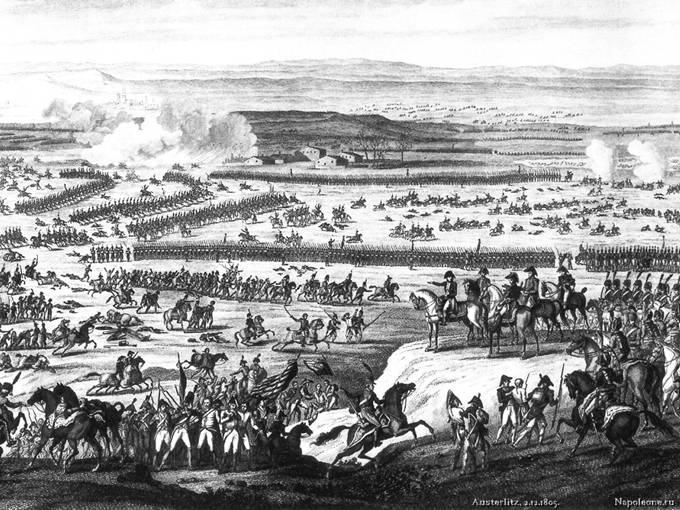 In Berlin defeated Napoleon signed a decree oncontinental blockade, which prohibited all dependent on states to lead Francetrade with England. Russian emperor Alexander I went to the aid of PrussiaHowever, in both major battles (at Preysish - Eylau and Fridlandu) could notdefeat the French. In 1807, the Russian emperor was forced to concludeTilzitskyy peace with Napoleon, in which all acknowledged his conquest and committedjoin the continental blockade. In the conquered German landsNapoleon created the Westphalian kingdomand from selected in Polish Prussiaing lands - Duchy of Warsaw.

In 1808 Napoleon invadedSpain, which refused to join the continental blockade. Led130,000th he joined the Army to Madrid, where the announced withdrawal of the throneSpanish King of Bourbon dynasty and made his country's new rulerbrother Joseph. It was in Spain, Napoleon suffered first defeat on landas against invaders began guerrilla folk.

The rebels of Zaragoza in 1808 surrounded 50000thFrench Army Marshal Lanna. For several months they could not get it.Zasivshy behind the walls of houses and monasteries, residents shot with rifles,invaders bombarded with hail stones, poured boiling pitch. Guns killedhusbands and fathers passed into the hands of their wives and children. The French took possessioncity, losing 15 thousand soldiers only after much of its inhabitants killed. Conquerorcut to 20 thousand garrison and more than 32 thousand urban population.

Napoleon was never able to conquer the Spanish people and was forced to keepSpain 250,000th army. French troops left Spain only in 1813

In 1809 took fifthanti-French coalition of Austria and England. The war, which beganAustrian Emperor against Napoleon, lasted only a few months andended in complete defeat of Austria. In France it was annexed Istria, Trieste,Dalmatia, and afterwards - Pope region, the Netherlands, the German coast of the NorthSea. Thanks to the successful wars of Napoleon reached unprecedented power. AroundFrance's borders have puppet state that ruled relatives imperatora. Napoleon is increasingly believed in hisinvincibility and seizurelyuvavsya idea of domination over allworld. One step toward this goal, he believed the conquest of Russia.Trip to Russia and had more prosaically goal: to make Russia complyTilzitskoho peace and continental blockade. 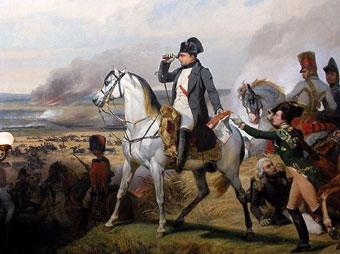 In June 1812 four hundred thousandthFrench army invaded the Russian Empire and moved to Moscow. Russianarmy, numerically inferior, avoiding a decisive battle. Its Commander Kutuzov tried to lure the French into the depthRussia, stretch their communication.Home Battle of Borodino took place August 26 1812 p., however, neither party managed to win itdecisive victory and destroy the enemy. Napoleon went to Moscow, butRussian emperor refused to sign a peace agreement. Meanwhile, RussianArmy made a brilliant maneuver: the French way of hiding in intactregions of the Russian Empire. With the onset of cold weather Napoleon's army vymuShen had to leave town and move west.Persecution Russian troops, guerrillas and painful attacks intolerablefrost turned the army of Emperor demoralized, hungry crowd.Realizing that the army can not save the dying, Napoleon abandoned her andreturned to Paris. 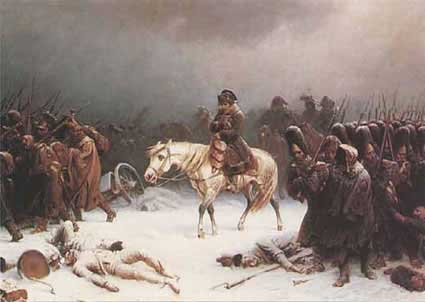 Cm. 544. Ownership is a right to use and rozporyadzhatysya things most absolute way that does not use wasone which is prohibited by law and regulations.

Cm. 545. No one shall be compelled to give their property, unless this is done for public benefit and byfair and prior compensation.

Cm. 546. Properties of a thing as moving or stationary, is entitled to all thisthing produces, and that naturally or artificially combined with this thing as itbelonging.

1.     What guaranteesPossession and use of property enshrined in the Code?

2.     What these rulesthe stabilization of property relations in post-revolutionary France?

3. Do you agree with the opinion of Napoleon's Civil Code that it will live forever?

3. Describe the internal politics of Napoleon I.Compare it restored the monarchy with the monarchy of Louis XVІ.

Make a table   "Foreign policy of the Consulate and Empire" on the scheme: