§ 6. The collapse of Napoleon I. Congress of Vienna (textbook)

§ 6.The collapse of Napoleon I. Viennese  congress

In the spring of 1813 against Napoleon,who feverishly recruited new Armytook shape sixth anti-French coalition of Russia, England, Prussia, Sweden, Spain and Portugal. Subsequently, when ityednalasya Austria. Monarchs of Europe were ready to gocompromise with Napoleon, but he rejected the possibility of anyconcessions. Fight for the Future of Europe has entered a crucial phase.

In early 1814 the Allied troops entered the territory

France. 31March 1814 р they came toParis. Onpoleon had zrektyXiathrone and go into exile. He made the rules,Telem smallFr. Elba off the coast of Italy, even the hallssewedwith thousands of guardsmen. The allies restored the Bourbon monarchy. Kingannounced brother insurancechenoho Louis XVI - Count Provanskiy who cameto the throne under the name Louis XVIII (1814-1824 pp. ). The abdication of Napoleon and the Bourbon restoration was awarded the Paris peace1814 p., so returned to Franceto the borders of 1792

2. One Hundred Days of Napoleon. Waterloo

Louis XVIII and emigrants who returned with him, tried to turnthey confiscated during the revolution and restore the property absolute monarchy.Was released from the army of 20 thousand officers. This raised the ire of Bourbon,zachipalo interests for new owners that emerged during the Revolution andNapoleonic wars. Napoleon closely watched events in France. After notvery long thought the former emperor tried to take revenge and returnpower, and in March 1815 he landed a thousand guards in the southFrance and moved to Paris. Troops sent against him went to his side.Bourbon fled, and on 20 March Napoleon again seized the throne. To fight with someoneformed a new, seventh anti-French coalition of England, Russia, Austria,Prussia, Sweden, Spain and other countries. 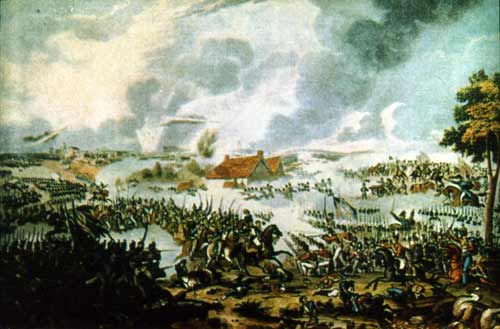 Having formed a new army, Napoleonlaunched a campaign against Belgium. June 18, 1815 Napoleon's army wasfinally defeated the Anglo-Prussian forces near Brussels, inWaterloo. June 22, after stodennoho rule. Napoleon WMDshenyy was the second time to abdicate, and thensurrendered and was exiled on the island.St. Helena in the Atlantic Ocean under the protection England, where he died in MayMay 1821 under mysterious circumstances. 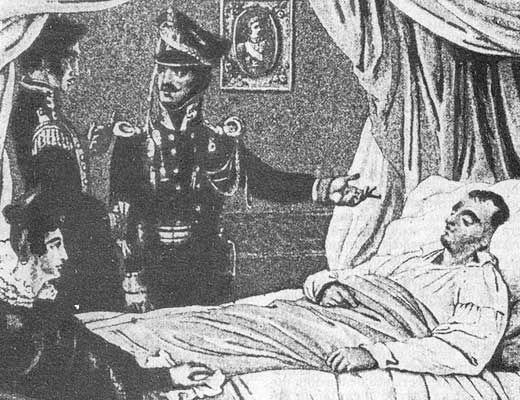 Congress of Vienna (September 1814- May 1815) period endedNapoleonic wars and launched a new systemth international relations inEurope, led to the creation of unions, whose purpose was the restoration andmonarchical support boards. Meanwhile, the winner triedto satisfy their own interests at the expense of territorial gains andsubstantially redraw the map of Europe.

In early September 1814 in Viennabegan, as contemporaries said, "relocation of the whole of Europe." Herewould come, emperors and kings, ministers, and representatives of authorized observers,invited and those who drove their own volition. At the congress representatives cameMore than 200 European states (all but the Ottoman Empire) - from largecountries to principality microscopic several square kilometers, those whogoing to decide the fate of nations, and those who waited for these decisions.

For Kings and messengers who came to Vienna dailyarranged points, play, hunting, walking. But Congress,"Worked" for nearly a year for business meetings not going to no time.Rumored that he is not in session, and dancing.

All proceedings at the Vienna conbelieve that this kind handled by the Committee of Four "with representativesvictorious countries - England, Russia, Austria and Prussia. The owner, an AustrianEmperor Francis, in the affairs of Congress almost did not interfere. He sought onlyone: to take revenge for all the defeats and humiliations suffered by Napoleon.Solving all the problems he put on his Chancellor Metterniha - mantalented and energetic.

Russian delegation was headed byEmperor Alexander I, whom Napoleon once called "cunningByzantines. "His influence and authority were enormous, as were hugemilitary forces of Russia. At the Congress of the Russian emperor was very active,flexible but hard whendiscussed protection of interests of Russia, as it ix understood. 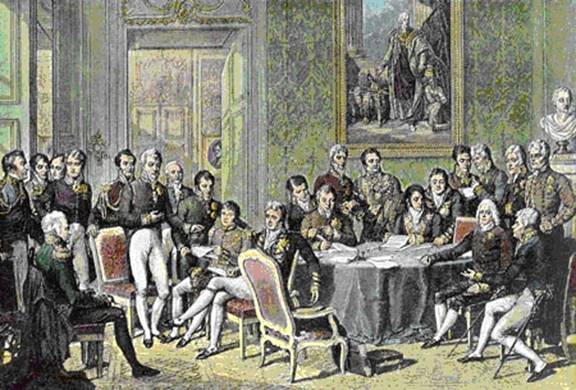 The Prussian king Frederick WilliamPI activities of the Congress is concerned, immersed in the revels and giving complete freedomfollowing his chancellor.

English delegation was headed by LordKaslri - Minister of Foreign Affairs. He stood out with cold civility,restraint, correctness. On it, he said that was the most KaslriEuropean Ministers of all the British and remained calm under anycircumstances.

The French delegation, which arrivedVienna shortly before the opening of the congress, headed by Charles-Maurice Talleyrand, unscrupulousand cynicism that does not know borders. He served and the Jacobins and Napoleon, and Louis XVIII, Betraying all. One of the greatest diplomats of histime, the master of fine diplomatic intrigue, he came to Vienna to defendinterests of France before the new monarchs of old Europe. And he did it withgreat skill. He managed peresvaryty allies, resulting in France,England and Austria united against Russia and Prussia.

VienneseCongress focused on issues of peacefoot settlement in Europe. But on this issue between the partiesthere were sharp contradictions. Russia seeing their main objective in joiningDuchy of Warsaw, spoke strongly against what England and Austria.Alexander I promised to restore Poland to adopt local laws and constitution.Trying to keep the rivalry of two strong in Europe, the states - Austria andPrussia, who performed the role of counterweight, Russia signed a secret deal withPrussia to transfer her to Saxony, where Russian troops nahodylysya.

To prevent the strengthening of the Union of Russia and Prussia,England, Austria and France signed in December 1814 a secret agreement withPil'na action. Austrian Chancellor Metternichsought to strengthen flowViennese German government at the state and was opposed to their union. Itsuit as England and France. London wanted to keep a seized during the Napoleonic wars, French, Spanish and Dutch coloniescherished the idea ofConnectivity in the Netherlands and BelgiumNetherlands Kingdom. After lengthy discussionshas produced general principles on which built a new model of internationalrelations: a barrier around France that if any complicationsgave the possibility to isolate it, preserve the balance of forces prevailing inEurope countries - members of anti-French coalition were compensated forpart in the struggle against Napoleon, the foundation of post-war order in Europe hada principletsyp lehitymizmu (law) thatmeant the restoration of borders Statesand their political system as of 1792 The final act of the Congress of Vienna was signed in May According to 1815 he went to Russia ofPoland, with Warsaw, kept her connected before Finland and Bessarabia.To Russia also moved UkrainianKholm Podlasie and lands that were a part of Austria after the thirdpartition of Poland. Russia, in . turn,returned to the eastern part of Galicia Austria - Ternopilnian land that itNapoleon gave Alexander I in 1809 Englandconsolidated its about. Malta in the Mediterranean, the Cape colony in southern Africa and the island of Ceylon. Partterritory Saxony and the Rhinearea passed to Prussia. German Some state and possession of Austria formed a German alliance to consisting of 38 small states and freecities. Steering role in it belongsAustria. It regained its power over Lombardyand received Venice. Was established Sardinian kingspany, which is incorporated into the Savoy, Nice and Genoa areaRepublic. Restoration of Papal and Neapolitan area Kingdom. Belgium and Holland were unitedindependent kingdom in The Netherlands. From 19 Swiss cantons formed Confederation, which declared perpetual neutrality.Norway interconnectionnalasya with Sweden. ToLeft of Denmark and Schleswig Holstein. 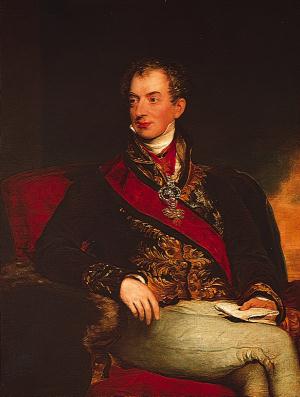 France back to the borders that were in the beginningrevolution. In it, laid under contribution to 700 million francs. 53 terrestrial andsea fortress France for three years were busy 150,000th armyallies. France was forced to issue allies military fleet.

To fight against the revolutionarymovements of European monarchs на proposalAlexander I in September 1815 concluded the so-called holy alliance againstrevolutionary movements. Members are committed to it to help each other insuppressing revolutions, to maintain the Christian religion. Act holy alliancesigned by Russia, Austria, Prussia, and almost all European monarchsStates. Britain formally joined the Holy Alliance, but actuallysupported the policy of suppressing revolutions.

Holy alliance crushed the revolution20's pp. in Spain Italy, Portugal, the uprising in the kingdomPolish (1830-1831 pp. ), but nothing could oppose national liberationmovements in Latin America (1810-1826 pp. ), was forced zmyrytyXia victory of revolutions in France (1830) and Belgium (1830 p. ). Finally, the democratic revolution 1848-1849 pp. ended the order in which the guard was standing and this union.

1. The French newspaper on the movement of Napoleon to Paris

19 March. Bonaparte quickly approaching, but he had never come to Paris.

20 March. Tomorrow will be Napoleon in the walls of our city.

21 March. The emperor is in Fontainebleau.

22 March. His Imperial and Royal Majesty arrived yesterday eveningTuileries and was greeted with shouts of joy of the faithful subjects.

Why tone changed for French newspapers from the approach of Napoleon to Paris?

Their Majesties: Austrian Emperor, the Prussian KingRussian emperor and as a result of major events that marked Europeover the last three years ...

Solemnly announce that the purpose of thisis the opening act before the world their unshakable determination, in the managemententrusted to them by the state, and in political relations to all other governments,guided not by any other rules and commandments of the holy faith,commandment of love, truth and peace ...

... Three monarchs that dohovoryuyutsya,will be connected by bonds of true and indissoluble fraternity, and considering himselfodnozemtsyamy as if they in any case and in any place will submit aother aid and assistance ...

1. What do you think why the emperors of the three countries called their union and the HolyIs it true?

2. For what purpose was created holy alliance?

3. Why these countries formed a holy alliance?

1.            As there was fightingsixth anti-French coalition against Napoleon? What were its consequences?

3.            Why after beatingNapoleon in Europe vstanovyvsya period of political reaction?

5.            Expand the objectives toplaced in front of Congress, representatives of different countries.

6.            Make a table of the Territorialchanges in Europe over the decisions the Congress of Vienna "for the scheme:

7. Tell us about territorial changes in Europebased on

8. Expand the concept of "holy alliance".