§ 10. Revolution in France and Germany (textbook)

§ 10.Revolution in France and Germany

For the population of most Europeancountries 40-вi pp. are perilous times. Three consecutive lean years (1845-1847) causedfood shortages and sharp price increases for bread. However, potatodisease has left many poor people without food, and in some areas of famine.In 1847 Europe was hit by economic crisis, whose consequences are reductionproduction, rising unemployment, falling turnover, financial collapsesystem of mass stop work industrial enterprises, banks, handicraftworkshop.

The inability of governments to overcomecrisis has caused irritation of the majority. In the revolutionary events of 1848 -1849 pp. combined requirementsremove obstacles to economic development, fighting for different segments of societydemocratizing the political system, workers' dissatisfaction with their materialposition, national movements.

AllEuropean mid-revolution XIX Art. were nezavershenymy, tasks in no other country was not the end implemented, while each revolution played apositive role.

In eachInternational events in the "year of revolutions" had its own characteristics, associated with specific problems of theirhistorical development.

2. The overthrow of the monarchy and the proclamation of the republic in France

Economic growth 30-40's pp. France reinforced the position of the average industrialbourgeoisie, which insisted on carrying out liberal reforms. In the Chamber of Deputiesopposition arose, which required the introduction of universal suffrage for menand restoring the republic. During the July Monarchy of Louis - Philippe suffragehad only 240 thousand people with 35 million population, but a right to be elected toParliament used a small part of them - mostly bankers, richlarge landowners and officials. "The kingdom of bankers' restraineddevelopment of France.

Prime Guizot long held the position through parliamentarycorruption that has affected even the courts. France kotylasya into the abyss of politicaldemoralization. 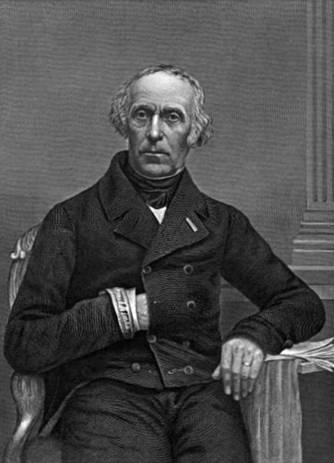 The peasants paid huge taxes (tax even existedon doors and windows in homes of peasants!) through a declining demand forproducts, development of domestic upovilnyuvavsya market.As the economic crisis that erupted in 1847, industryLovei production in France fell by half.Thousands of Workers were thrown into the street, flashed everywhere hungryriots.

The government caused a sharpcriticism of the opposition. However, the government did not want to fall away and banned in Parisconducting any demonstrations and meetings.

February 22, 1848, in Paris clashed with demonstrators troops and police. The next day troops opened. fire onunarmed crowd. It killed 52 people. This massacre shocked the Paris. It wasbuilt more than 1500 barricades. Guard troops and moved to the side of revolution.Louis-Philippe abdicated and fled abroad. 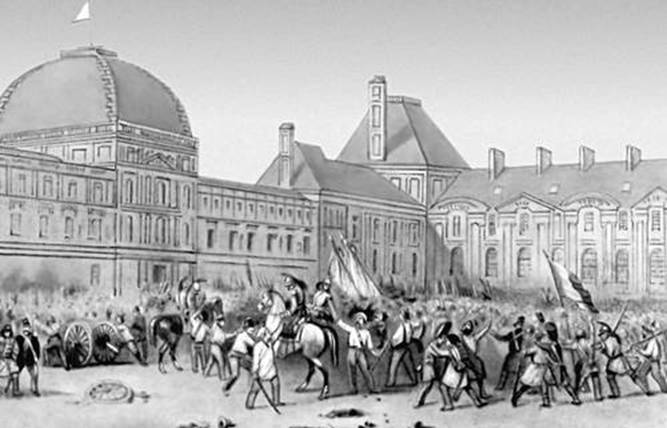 Fraternization soldier risen from near the Royal Palace

February 25, 1848 France declared a republic. Newgovernment dissolved the Chamber of Peers and MPs abolished titles of nobility, brought withParis army, lifted restrictions on citizens to join the National Guard,announced a political amnesty and restored freedom of speech, press, assembly. It wasreduced working hours in Paris from 11 to 10 hours, have the right towork (his decree of the Provisional Government pledged to "work to ensureall citizens "), opened the national workshop for the unemployed. And finally,zapilne established suffrage for men aged 21 years (the numbervoters increased to 9, 3 million people) inFrance vstanovyvsya nayliberalnishyy political regime in Europe.

In late April elections to the Constituent Assembly. The victory earned them the bourgeois Republicanswhich took 500 with 800 seats. The new government was not as liberal asearlier. Many revolutionary clubs have closed, long working hours againincreased to 12-14 hours.

June 22 issued an order for the closure of nationalworkshops in Paris; of  workersproposed  join the army andmajority - to leave the province to repair routes Saline, where malaria raged.113 thousand workers in Paris were left destitute. It wasLast Drop, which repovnyla cupTurpin theirsion. 23-26 June Paris again covered the uprising. Streetsfilled withoutstrantamy. Workersarmserted. Lightning-erect the barricades, there were over 400 (perother data - 600), they covered the eastern part of town, which rebels captured.June 24 to suppress the rebellion Constituent Assembly gave dictatorialoffice of Minister of WarVi,Gen. Kavenyaku known for its brutality in the fight against the people of Algeria. Morning of June 25 anddisposal Kavenwhich was over 100 thousand, and finally revolt - 250thousand well-armed soldiers and plenty of guns, the insurgents - 40-45thousand soldiers, supported by working population of Paris. They had no guns,not enough guns, ammunition, food. they have not provided any assistanceworkers of other cities, not farmers. A recognized leader urged workers Louis Blancthey lay down their arms.

Uprising was brutally suppressed. Infighting killed 800 rebels, and then without trial were shot in 1911thousand Persons arrested 25 thousand, of which 3, 5sent thousands into exile. 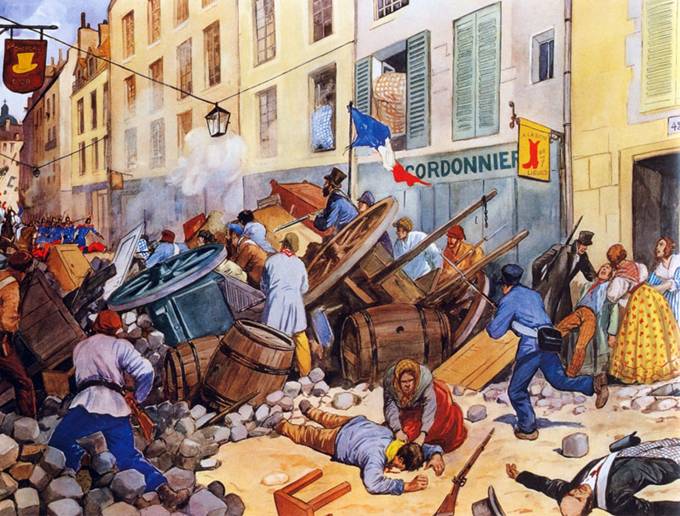 June 28 General Kavenyak formed a new government of France.In the June events policymakers saw the danger to society. However, theychose not to resolve those conflicts that caused them, and took a course ona strong power in the country.

November 41848 Constituent Assembly adopted a constitution Second Republic, each of which contained a paragraph freedom in general terms, andElimination of that freedom - the reservation.

LedState was a president who was elected population 4 years and enjoyed tremendous power. December 10th president waselected Louis Napoleon Bonaparte - Napoleon's nephew I. This figuresuited not only financial and commercial-industrial bourgeoisie, muchsome of the workers (the latter voted for him, that was not nominatedGeneral Kavenyaka), but the peasantry. It is believed that the nephew of Napoleonprotect the interests of small landowners.

In May 1849 elections toLegislative Assembly. 2 / 3 of them have received for the monarchists. They soughteliminate the republic, but among them there was a struggle for a candidate tothrone.

December 2, 1851Louis-Napoleon, the coup did. With the army he seized the capital and dissolved Parliament. Afterplebiscite of December 21, 1851 Louis-Napoleon received the full power and the right edition of a new constitutionaltution.January 14, 1852 for a few hours and has been written force of the constitution, under which all the fullnesspower conversionla to the president elected for 10 years.

Staterevolution December 2, 1851 was a mere preparation to implement the main goal of the President - do away with the second republic and become emperor. Exactly one year later,December 2, 1852 p., in France the monarchy was restored. Louis-Napoleonannounced

Emperor Napoleon, under the name III. The second republic was replaced by Second Empire, whichlasted 18 years.

In the middle XIX Art. Germany remained fragmented into 38 independent states. Existencebetween most of them caused customs borders that the carriage of goodsGerman lands cost more expensive than in America.

The economic crisis in 1847 and crop failuresdramatically worsened the situation of the majority. Urban poor, outraged increasefood prices, smashed shops and bakeries. Farmers burned lordspossessions and destroyed documents that were recorded feudal obligations.

In most German statesformed the opposition, which had put forward demands for political andsocio-economic transformations.Representatives of liberal circles offered limitedring convocationGeneral-birth representation, distribution of a customs union,eliminate privileges landlords. Supporters of the moderate views advocatedcreation unified German state in the formconstitutional monarchy. CouncilCullen fought for the union. Germany andproclamation of the republic, formed the elimination of privileges and taking measures toimprove the financial position of workers.

Revolutionary explosion of 1848 wasattempt to resolve the pressing problems of Germany.

Crowds of people held for 10 daysdemonstration. Liberals, who led them, offered by peaceful meansdemand from the king for reforms. March 18 a large crowd of workers,artisans and students went to the royal palace Tirharten. Guards thatOchodropped Palace, opened Quantityhon;About 200 demonstrators were killed and many wounded. Anger and resentmentpeople covered. The evening of March 18, 1848 Berlin ukryly barricades. During the nightthere were violent street fighting. The Prussian king Frederick William IV was forced to retreat. It was announced electionsPrussian National charges which weredevelop a constitution. Skasovuvalasya censorship. Envisaged the creationzahalnonimetskoyi Army, the elimination of customs and other boundaries. It was formednew government, consisting of liberals and opposition. 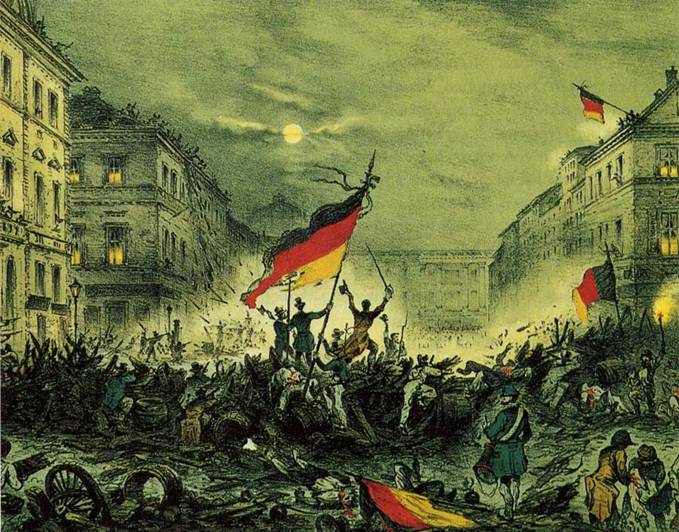 In May 1848 inFrankfurt-am-Main started their meeting elected the entire population of GermanyNational Assembly. Most of them were representatives of the liberals. Amongthe most important decisions taken by this Parliament, were: the abolition of internalduties, the unification of all German states into a single customs union recognitionneed all kinds of abolition feudal dependence of peasants. 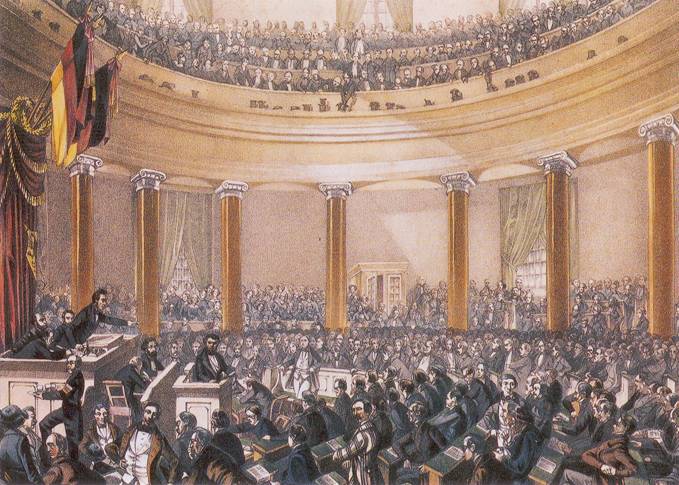 After lengthy debate andheated debate has produced a draft constitution zahalnonimetskoyi. For herGerman states united in a federation. Carriers of the central government wereGeneral-emperor and a bicameral parliament - the Reichstag. PowerGerman monarchs in some states remained inviolable. Constitutionproclaimed the democratic rights of citizens, equality before the law.

Nevertheless, the provision were notProvided German monarchs, and they did not want to acknowledge. Prussianking Friedrich-Wilhelm IV abandoned his proposed steamparliaments of the imperial throne, and said he will not"Raise the crown of dirt".

Thus, the revolution in German landsended in defeat, her main task was not performed. AssociationGerman states into one nation state has occurred.

§ 5. Some German states remainindependence, since the latter is not limited to imperial control.

§ 6. Only the imperial power isinternational representative of Germany and some German states ...

§ 11. All armed forces of Germanyare subordinate to the imperial power ...

§ 45. Only the imperial authority has the rightlegislation and supervision of a higher monetary system ...

Requirements which social groups were embodied in the constitution?

2.      How was the overthrow ofJuly Monarchy and the establishment of the republic in France?