1. Formation of the German Empire. The Constitution of 1871

After the Franco-Prussian War, allGerman states unitedXiainto a unified German empire, which consisted of 22 monarchies and three free cities.

Byimperial constitution 1871, the Head of State considered the emperor. Him could only be a King of Prussia.Emperorthe spot had a much greater role inExternal Affairs, led the armed forces had the right to declare war,can assigntslera (head of government), higherofficials and officers, to convene androzluskaty parliament, consisting of two chambers. Top house - the Bundesrat - intended to representatives of all the monarhiy and free cities. President of the Bundesrat wasimperial chancellor. The lower house (Bundestag) was chosen first overalllosuvannyam. However, women and soldiers weredepriveLeno suffrage. Parliament (Reichstag)was limited rights, as the law, which heaccepted, approved belongedWool emperor.

Sincecreation of the German Empire in parliament painsix belonged to representatives of the Conservative party, whichexpressionsting interests Juncker, big industrialistsand financiers. Conservative opponents wereLiberal Party, which protected andinterests ofindustrialists. Both parties supported the government. In 1881 formed Catholic party. She acted in defenseCatholic population in Germany and through it found itself in opposition to the government. Inand there was opposition Social Democratic Party, which had a significant representation in parliament and expressedinterestsa system working class, smallowners. Note that significantrole in the political life of Germany played hostVi, who surrounded the emperor and influenced the definition of externalnopolitychnoho course of empire and the developmentmilitary industryent.

Afterunification of Germany have developed better conditions for economic development. This was due to end industrialrevolution and the singlezahalnonimetskoho market,unityrich in minerals regions of Alsace and Lotrynhiyi, p'yatymilyardna contribution, new discoveries in science and technology.End XIX Art. volumeindustrial production of Germany came in second place and the world, and the pace economic development ahead of the UKand caught USA.

Development of the German economy in 1871-1914 pp. had its own peculiarities.

Important role in the creation of heavy industry played astate orders, subsidies, concessions, construction of plants at the expense of the state.

Landowner (Junker) economygradual, evolutionary way, as mentioned above, passed to the capitalist,commodity production.

Despite significant progress in the developmentindustry, the proportion of Nomechchyny in the worldproduction was 13%, while Great Britain - 32%. And every year the German higher quality and cheaper Productsconquered the world market. Then it was a struggle and for colonies. Colonies of Germany in 1914 had an area of 2.9 million square meters. km withpopulation of 13 million people, while the British colonial possessions cover32.7 million square meters. km with a population of 350 million people. These vast knowledge causedjealousy and caused a bitter fight between the two countries. 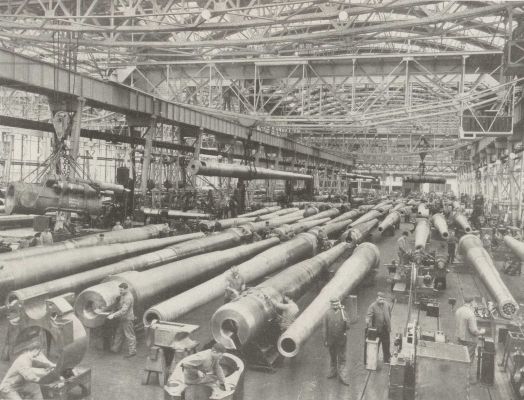 Production at the plant Krupp guns

End XIX Art. in Germany, as in other industrialized States were a monopoly. In 1914 there were in the country to 600.The most common form of monopolistic cartels and mergers were syndicates. 85%financial capital controlled eight banks. The most famous were the monopoly:Krupp, Rhine - Westphalia iron cartel, German unionrolling mills, Rhine - Westphalia coal syndicate and others.

3.Bismarck and his policies. "Kulturkampf"

The first was the German EmperorKing of Prussia Wilhelm II of fact, a country ruled for 20 yearsChancellor Otto von Bismarck, who enjoyed the full trust of the emperor. He wasprominent politicians and diplomats, vested with sober minds, great willand energy. For this he received the nickname "Iron Chancellor".The main lines of its internaltre policywas to provide a centralization of power in the Empire through eliminationautonomous rights of some monarchies and the Catholic Church. In 1872 Bismarckachieved adoption of the law under which the clergy deprived of the right of supervisionfor schools. The priests forbidden to conduct political campaigning. Instead of churchintroduced, institution of civil marriage, civil registration of birth anddeath. Prohibited activities of the Order of Jesuits was to control all Stateappointments to church positions. Policies against the influence of the Catholicchurch formally named"Struggle for culture" - "kulturkampf.

Bismarck alsolaunched a campaign against the Socialists. In 1878 p., after two terrorist attacks on the emperor, he suggestedReichstag accept the exclusive law against the socialists, whoactually prohibited activity socialist organizations and working papers.Social Democratic Party was forced to move to semi-state.

Along with the repressive measuresBismarck held a series ofcial reforms. InIn 1881 he announced the beginning of the "era of workerWhat legislation. "In the next three yearsReichstag adopted laws of workers' insurance against accidentson productTwi and the disease. In 1889, it waslaw on pension provision old age (from 70 years) and in the casedisability. In 1891 came the law of the 11-hour day andthe abolition of child labor in 13 years. In the mid 90's pp. Germany became the country with the most advanced sociallegislation.

4. Union of the Three Emperors. Go to the "global politics".William II

The main purpose of foreigncourse of the German Empire was a military-political coalition of EuropeanStates against France. The ruling circles in Berlin were based onAustria-Hungary, which after the Franco-Prussian war came closer toGermany and Italy - France's rival in the Mediterranean and northernAfrica. In order to attract coalition of Russia, a potential allyFrance, was put forward the idea of joint struggle against the social democratic movement.May 6, 1873 Russia and Germany signed a treaty of alliance. A month later the sameagreement signed by Russia and Austria-Hungary. Thus was formed the Union of Three Emperors,so that France was isolated, and Germany took an important place inEuropean arena.

Caricature of the Union of Three Emperors "

Union threeEmperors existed to 1887 p., until the intensificationclearances that spread of Russian-German and Russo-Austrian conflict.

First crackcoalition gave during a Middle East crisis 1875-1878 pp. Openly Hostileposition of Austria-Hungary and Germany at the Berlin Congress changed the attitudeRussia's its allies. October 7, 1879Germany and Austria-Hungary signed a union treaty, aimedagainst Russia. The contract began creating the Triple Alliance, which ultimatelyformed in 1882 p., when Italy joined the agreement. This is logical and pushed RussiaFrance to close military and political cooperation. Over time, as opposed toAustro-German-Italian bloc was formed alliance of France, Russia and England(Entente).

In 1888, Emperor Wilhelm of Germany was II. The young monarch intends personally to lead the country andHe wanted to get rid of overbearing, Bismarck, in which opposingviews of many issues. This is particularly true of foreign policy andpolicies involved. William II thought that should be more active foreign policy, without fearuse force against its competitors, leaving three HIV Unionemperors. William II negatively evaluated "exclusive law against the socialists." Hishad to cancel, and Bismarck in 1890 has retired. 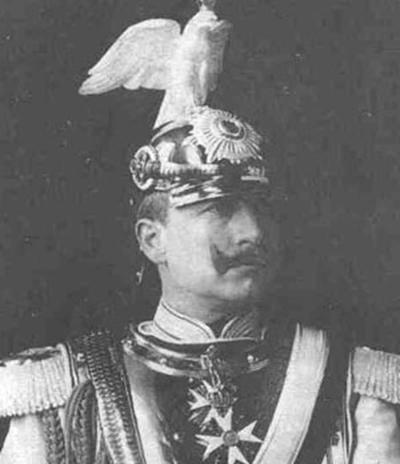 After that, the colonial expansionGermany strengthened "We demand for a place under the sun" -Byulov announced a new Chancellor, expressing the interests of German industrialfinancial and military circles.

The ideological foundation for expansioncolonial expansion was panhermanizmu doctrine, which was the bearer of Pan-Germanunion. The doctrine stated that the Germans dominate all nations and have dominionover them. Panhermanisty called a policy of force against other states,create a powerful army and navy to prepare for war and to redraw the world.

The plans included the expansion of GermanBritish and French seizure column and the border regions of France(Expansiya West), rejection ofRussia (nach Osten Dranh - pressure on the East), BalticUkraine, Northern Caucasus, the penetration of the Middle East.

Such plans were panhermanistivfeedback to the government. The army was the main concern of the state and militarism, that isincreasing military power - government doctrine.

In 1913 military spending amounted to50% of the budget. On the initiative of Minister of Navy Admiral Tirpitsa Germany to begin creatinghuge navy, which in number and might soon becomesecond after English.

In 1913 unions united 2.5million workers, the Social - Democratic Party - 1 million Social Democrats hadthe largest faction in parliament - 109 deputies out of 397. The theoretical basis of the SPDserved Erfurt Program (1891 p.), which meets the basic provisions of Marxism. She was replaced by GothicProgram 1875 p., announced that the purposeParty emancipation of the working class and a socialist society,obmynala but the issue of "socialist revolution", reflectLassalya position that the working class can achieve its goals onlythrough universal suffrage and the creation of state-aided manufacturingcooperatives.

Yet by 1899 p. E. Bernstein in his book "Socialism Background and ObjectivesSocial-Democracy criticized the fundamental provisions of Marxisttheory. Referring to the new trends in the development of capitalist relations,point to the false allegations of impoverished working class. Heargued that capitalism can reform towards social justice andthat the conditions for socialist revolution were not yet ripe. This attempt to reviewMarxism has been declared revisionism, right-bias in social democracy. Aall those who departed Did Marxism, became known as the revisionists,opportunists. Bernstein's speech led to a split in the Social-democraticGermany on the right-wing movement (Bernstein), centrists (Bebel, Kautsky) and the left(Liebknecht, Luxemburg). After World War split was approved andorganization. 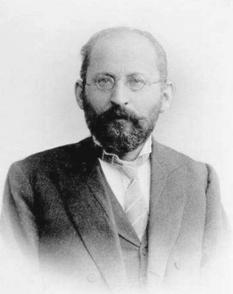 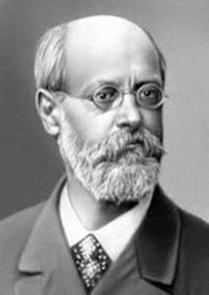 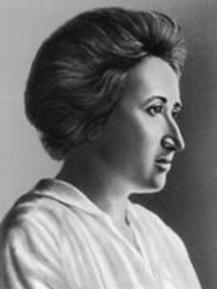 In the speech the Foreign Minister Prince Byulova inReichstag December 6, 1897

"But we, in any case,doderzhuyemos the opinion that Germanyfrom the beginning should not be excluded from the competition of other nations for dominance overcountries that have many prospects. Those times when one of their German neighbors concede land to another -sea, and left a sky dominated by pure theory - those days are gone. Weconsider one of the main objectives of our promotion and development interestsour Company, our trade and our industry is in the EasternAsia ...

However, we could not accept thatto China reached a view that allowed for us what is not allowedon the other. We must demand to German missionary, Germanentrepreneur German goods, the German flag and a German ship wereChina as respected as those belonging to other States. Finally, weready to reckon with the interests of other major powers in East Asia, beingfirmly believe that and our own interests as well to find a properattention. In short: we do not want anyone move back into the shadows, but for myselfcorrect destination under the sun ... "

1.    What wasaggressive intentions of Germany?

2.    How do you understand word"Require a place in the sun?

5.       What are the main provisionspanhermanizmu doctrine?