The cause of the Franco-Prussian Warwas rivalry between France and Prussiafor hegemony in Central Europe. Frantion, which osterihalasya strengthening Prussia, sought to prevent unification of German states under its auspices. Both countries wanted the war to finally resolvecontradictions nazrivaly.

The impetus for the dynastic wars aredebate over the Spanish throne. In 1868 in Spain there was revolutionresult of which Queen Isabella II was deprived of the throne. The people demandedrepublic as well as policymakers Spain meanwhile were new searchmonarch. Ulypli throne in 1870 the Prussian king offered relativeLeopold of Hohenzollern. Fearing caught between two fires, France has beguninsist that the candidacy of Leopold, as a claimant to the throne, notconsidered either then or at any time in the future. Prussia, agreeing withfirst request, refused to accept the second. Further insistence of Franceended up that the Prussian kingAnd William sent the French ambassador "Ems depeshu "pidkorehovanu Chancellor Bismarck. In it, in particular, contained a phrase that"His Majesty the King refuses to accept the French ambassador.

The French government took this asimage and July 19, 1870 declared war on Prussia. Masterfully played by Bismarckprovocation was successful. Prussia in the eyes of the public came forward as a victimaggression.

Having begun the war, France was unprepared for it. its Prussian army inferior in number as (250thousand and 400 thousand soldiers) and high quality.

2. The course of war

In early August, three German armyinvaded the French. 20 серпня 80000th French army was surrounded inNear the fortress of Metz, and September 1 the same fate befell one hundred thousandth army inDistrict of Sedan, which was itself

Emperor of FranceNapoleon C. September 2 after a brief negotiation Napoleon III signed the instrument of surrender of French army. 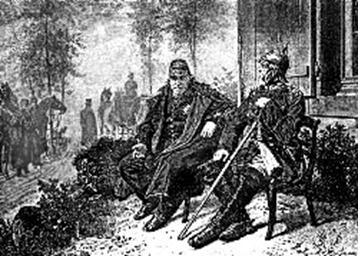 Meeting of Napoleon III and Bismarck after the surrender atSedan

The news of thecapture the Emperor shook Paris. 4 heathering 1870 people took to the streets of the city. France was declaredrepublic (Third Republic in France). Power passed to the Provisional GovernmentNational Defense that it has formed a bloc of opposition political forces - frommonarchists to the radical Republicans.

Aspiringstop the war, the new government proposed to Prussia truce and hoped to continue to negotiate an honorable peace. In response Prussia openly nominatedaggressive demands.

Republicans who dostupylysya toauthorities in France, considered acceptance of those conditions of national humiliation. Theyfeared that the republic will fall in the shadow of suspicion of betraying national interests It was only during the revolution of the late XVIIIArt. She gained a reputation patriotic regime, unlike, for example,Bourbon monarchy (1814-1830 pp.) That it upon both the French foreign interventionist.

Thus, the situation in which appearedFrance, while he hopes for a rapid conclusion of the war. September 16, 1870Prussian troops were on the approaches to Paris. The town was completelyblocked. October 27 the French army, in Metsi surrounded, surrendered.

Only through extraordinary measures in late 1870 south of Parislucky expand Luarsku army. But this was not enough to savecountry. I just urge people to France's nationwide war onliberation of the country. But fears that the national liberation war mayconverted into a civil, as happened in 1792 - 1793 pp., hindered the government from such a step.He concluded there is no alternative but to concludepeace on terms proposed by Prussia, and began to expect a favorable moment.Meanwhile, he only imitated national defense, for what was called"Government of national betrayal."

Covering the war has put Paris in a difficult situation.Its garrison consisted of nearly 500 thousand armed men. These were mainly soldiersNational Guard, men nepryzovnoho age. Filth trained and not verydisciplined, they could hardly resist regular troops inopen field, but defending their city, homes, they were set to fightno matter with whom. Therefore, the Prussian army hesitated to go directly to storm andresorted to a long siege. 325,000th hostile army surrounded the city andend of December 1870 began to bombard it with heavy artillery.

Most citizens do not worrydevastating attacks and losses and the threat of hunger and cold in winter. In January 1871per capita be given 300 grams of bread a day. On the wood wascut all the trees of the Paris boulevards. However, on the black market "you can buy everything, but prices were available scanty number of citizens. Lack of resupply of raw materials and exporting finishedproducts' paralyze industry, and with it, and all business activitymillion of the city. Industrialists and traders were left without income, as workersand employees - without salary paid.Thousands of families existed due reward you received for service inNational Guard - 1.5 francs a day. Living in the city could not payapartments, industrialists and traders - return loans taken.

To preventthreat of bankruptcy, the government banned require payment of liabilities and flat to the endWar.

But it is notcould stop growing social napruzhenosthose in the city, where half-starved existence against the background of mostits meshwho benefit particularly conspicuous in the eyesurfeit of rich residents of neighborhoods.

Discontent Parisians began to recruitpolitical overtones. The responsibility for the defeat in the war, abuse, famine reason they blamed the government.Discontent him sometimes in vylyvalosacts of rebellion. It was, in particular, from October 1870 p., when it became known that the government wants to negotiate with Prussia. National guardsmen arrested andkept as hostages ministers. This truce was broken,prepared by Adolf Thierry, head of the government.

Under these conditions, the government saw its main task is todefense of the capital, and in hamuvanni Parisians.

In early 1871 the situation that happened, the government estimated ashopeless. All attempts to break through the blockade failed. Further delayconclusion of peace was impossible.

To neutralize the opposition shut down the democratic Parisianclubs that played the role of political parties, and several opposition newspapers.

In the new repression Parisians respondedattempt to revolt. Prydushyvshy his government finally unleashed its hands.

While inMirror Hall of the Palace of Versailles PrussianOn King Wilhelm I was proclaimed German Emperor. January 281871 between France and the united Germany signed an armistice. Heterms of the forts of Paris and army supplies of weapons handed the Germans.

In the elections to the National AssemblyFrance defeated the forces that supported the immediate conclusion of peace - the monarchists andpart of the Republicans. Chairman appointed executive meeting Thiers. Hesubmitted the preliminary conditions of peace, which involved the transfer of GermanyAlsace-Lorraine and parts, as well as payment of 5 billion francs indemnities.The National Assembly adopted these conditions. Ultimately peace was signed inFrankfurt, May 10, 1871 р.

4. The Paris Commune and its defeat

The Paris Commune in 1871 - Uprisingpopulation has been brought to. despair, hunger and poverty as a result of the Franco-PrussianWar. In the Marxist literature of the Paris Commune was seen as the first inWorld History of Socialist Revolution, the prototype of the "dictatorshipproletariat.

its leaders were leaders whobelieved that the price of heroic efforts can set the kingdom on earthfreedom and justice. They considered themselvescontinuing the business revolutionlyutsioneriv end XVIII Art.

From previousrevolutionary actions of the Paris Communeriznyalasya thatit was largely due to contradictions of industrial society. herpreceding years, unprecedented in the history of France's economic recovery,which, however, and little downside.

Expanding the industrial revolution, accelerating the paceindustrialization led to the impoverishment of a large number of small owners.They went to work at factories and plants where conditions were extremely serious washings andsalary - negligible. Machinery manufacturing experience and znetsinyuvaloqualified artisans and manufactury former workers. At factories andplants has become widespread employment of women and children who are less likely to pay wageswages than men.

Accumulated in disadvantaged hate exploiters earlyor later escaped to the surface. But if not for the Franco-Prussian war, it is unlikely to be turned into a bloodycivil war.

The impetus for the uprising of Parisians wasdissatisfaction with government policies Thiers.

While a significant numberDemocrats see a protection reaction andrestoration of the monarchy в decentralizationpower. Parisians demanded the restoration of government in the capital. In the role ofShieldingKiv interests of Parisians stoodNational Guard - the most organized power of the capital. February 24, 1871, the federation was formed Republican National Guard, headed byCentral Committee. In fact, the National Guard became the center of opposition to the government.

Though that was seriousdifferences between the National Guard andgovernment, and yet no one in Paris and thought and talked of armeduprising. Armed National Guard speech provoked the government itself.

After the lifting of the siege of Paris stopped paying youAwards National Guard soldiers. The towneconomy which not revived, thousands of people were left without meanslivelihood. When the National Congress annulled the suspension of payment of debts, for a few days to paywas presented 150 thousand debt. Parisians resented the factthe government and the National Assembly chose his place of residence Versailles.

March 18, 1871on the orders of the government troops attempted National Guard to seize the artillery, which was focused on MonmartrskomuHill. their movement perepynyly women who occupied the morning queue for breadshops, and the soldiers retreated without a fight. But it happened that the generals Leconteand Tom got into the hands of guards and were shot. 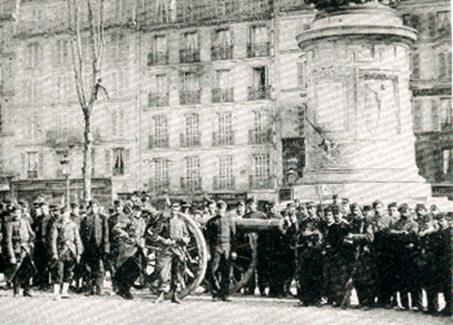 Because of this, Thiers ordered theevacuation of government offices to Versailles. Together with the government moved the capital fromrepresentatives of wealthy society. The only authoritative force in ParisCC left the National Guard, who seized power in the capital and appointedon 26 March elections to the Paris Commune (as a tradition in France calledbody self-Paris). Attempts to reconcile the government and the Central Committee of the National Guards were unsuccessful. The Government made it clear thatParis says opposition crimes with which to talkgun.

In elections held March 26,attended by 229 thousand from 485 thousand have listed. Elected to the Commune in 1986persons of which 20 immediately resigned.Conducted April 16 by-election. Among the members of the commune were famous people -members of the 1848 Revolution p., artists. But most members was unknown to the public. Itwere different people in a profession - doctors, journalists, workers, officials said. Inthe political side they belonged to prudonistiv, and neoyakobintsiv Blanquists.Some of them belonged to the International Society of Workers (1-International). Political differencescomplicated the work of commune, put at risk its unity and evenexistence.

Commune declared their intentionmake profound changes that they fought for more than one generationFrench revolutionaries: the regular armyzastupav armed people, onvodylasya democratization of the state apparatus,provided that the elected officials and variability; likvidovuvavsya power-sharinglegislative, executive and judicial branches.

Was introduced as a new organizationwork. The enterprises working ustanovlyuvavsya control. Some companiespassed workers' cooperatives.

Zaprovadzhuvalosya free of charge as a secular study.

Canmake it all the Paris Communards? In some they still failed.

Urgent reforms were aimedthe needs of the population, such as:

The main concern of the commune remained the war on Versailles. Not with the support of the provinces had Communardscount ofyou only on yourself.

The first clashes between defenders of the communeand its enemies began in April. Noparty did not won a crucialtion benefits.

In May it was scrapped. Government of Thiers,received assistance from the German command arms and soldiers (the captivesice war French soldiers were on parole) went on the offensive, and May 21, 1871 armyVersailles vderlyreduced to Paris. Fighting lasted until 28 May. Last fortthat he defended the Communards, surrendered on May 30. 72-day government of Pariscommunes over. 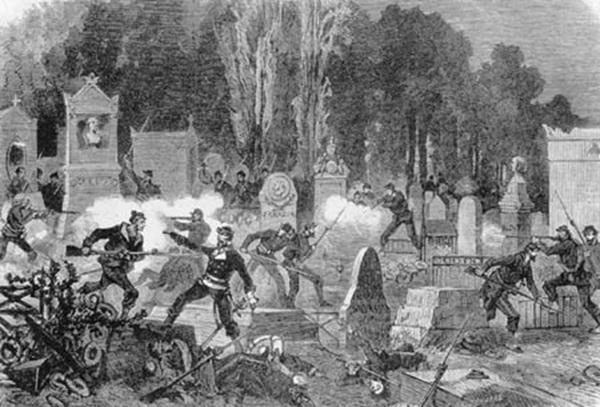 Fight with the Communards Versaillese

Belligerents as if competing incruelty. Versailles mercilessly shot the defenders of capital, and the Communards -hostages, which were mostly people from rich layers society. During the street fighting Communardsintentionally set fire building, which hadgreat historical and architectural value - the city Town Hall, PalaceJustice Tyuyilriyskyy Palace, Ministry of Finance House, Thiers. Versaillesangrily took revenge on their enemies, their blood bay city. 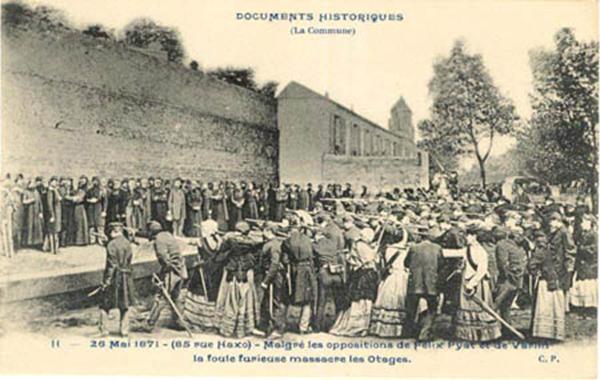 Costlystubbornness has cost the French politicians who did not want compromise, and national leaders who believed that they are calledmake its high historic mission. But human memory is an unusuallyselective. For some remained in the commune Memorytragic history with France, for others - a holiday victorydemocracy and justice.

1.   Expandcauses and course of the Franco-Prussian War

3.      What are the basic conditionsFrankfurt peace.

5.      Give a description ofdomestic policy of the Government of Thiers.

8.   Givecharacteristic of the reforms that they carried the Communards.

9.   Basedprepare additional sources of stories about the activities of the Paris Communards.