The impetus for the Revolution was the strikePutylovskoho plant workers in Petersburg, which began January 3, 1905

At this time trade-union organizationCity Workers - Meeting of Russian factory workers'(Head - the priest Hapon) to offer their leader decided to apply forpetition to the king. During her pidpysalosya 150 thousand people.

On Sunday 9January 1905 festively dressed Petersburg residents, led by Gaponov moved toWinter Palace, where they were encountered gunfire. Over 1 thousand and 5 thousand deaths Wounded- Such was the effect of a "bloody Sunday" and shot faithgood king. Hapon fled, but later on sentences its workers were arrested and hanged in the suburbs of St. Petersburg

Events in St Petersburg stunned Russian public andaroused a storm of protest throughout the country. In Russia, the revolution began.

A national task of the revolution consisted in establishingconstitutional and democratic order in Russia likviDaci autocracy, democratization of public life, progfenceand legal consolidation of the rights and freedoms, and solvenational issues, the rights of peoples to national self-determination.The main issue was agrarian - the elimination of landlordism,abolition of redemption payments in 1861

To revolutionary transformations soughtall segments of society: intellectuals and Russian national minoritiesentrepreneurs, peasants, workers, students and children, the army. However, each layerSociety set for itself in its own specific goals. Depending on who is inwas more politically organized, and that became the dominant force, defined the nature, course and resultsyourevolution.

Shooting demonstrations of workers inPetersburg has inspired a wave of mass strikes which swept the country asJanuary-February 1905 they took part in 440 thousand workers. In the summer of 1905 strikestruggle became primarily a political nature. Striker played underslogan: "Down with autocracy!". Many times there were clashes betweenworkers and police.

The revolutionary struggle led tocreation of authorities Revolution - Workers' Councils (the first of themoccurred in Ivanovo Ascension). Board-wide workers' deputiestiv appeared in 50 towns and cities of the Empire.Birth councils was due primarily to lack of country elementsdemocracy, extreme social tensions and outright support,which the state has provided the dominant classes. Consequently, workers had to relyonly to themselves.

Along with the creation of workers councils were consolidated by professionalor signs of activity in order to jointly protect their economic interests.

In the summer of speeches to the workers involved peasantry. Heelcounties of the European part of the empire was seized by the peasantsdisorder.

Under the influence of revolutionary actionWorkers and Peasants pokachnulas last leg Tsars - army. The first performance of militaryhowever spontaneous, occurred on the battleship "Potemkin". June 14, 1905killed by insurgent sailors and officers raised a red flag on the mast. 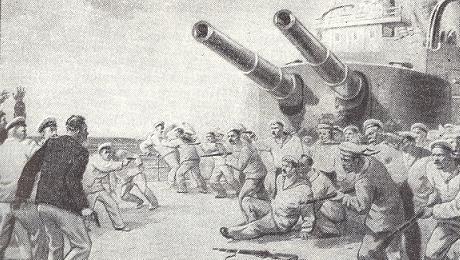 "Potemkin" arrived inOdessa port. The team did not know what to do next, because the rebellion leader killedduring clashes with officers. In the meantime, has moved to Odessa squadron of 12ships, which were ordered to shoot down rebel battleship. Sailor shipsquadron refused to fire the "Potemkin" and met him shouts"Hurrah!". Commanded a squadron command frightened to return immediatelyto Sevastopol. Battleship "George Pobedonosets" out of the unitsquadron and joined the "Potemkin".

After long discussions rebel ship took a course onRomanian port of Constanta on coal and of supplies. The Romanian government has given hisconsent, and "Potemkin" went to Feodosia. He narazyvsya onfire coastal batteries. June 24 battleship was again in Constanta, whereRomanian authorities gave up. The team went down to the shore and the ship was returnedRussia.

The development of the revolution, its extentautocracy forced to make concessions. In August 1905 Nicholas II signed a manifesto Inwhich promised to convene the State Duma - Parliament. Through thisshunting government was lucky to split in opposition ranks. But the revolutioncontinued to increase.

Turning in it are the events in October 1905 the beginningmonth began all-Russian political strike, in which attended by 2 million people. Seeking to quell his, Government October 14 introducedmartial law in many cities. Universities were closed. Factories and plantstook control of police and troops. However, the strike spreading. And thenPrime Minister of the graph S. Witte insistedradical reforms. October 17 Nicholas II signed yet another manifesto, which"Gave" the people of civil liberties - personal immunity,freedom of conscience, press, assembly and unions. Deklaruvalosya convocation of the State Duma.

Manifest provided autocracyachieve two positivetiveresults. First, gaining commitment to financialing community, which depended on loans RussiaFrench, British and German governments. They saw in manifesto guarantee the implementation of the constitutional formboard в Russia transition to parliamentarism. Second, the manifestofinished split Russian opposition, moderatewing which either openly welcomed itor perceived carefully considering, however, that the main issuestion revolution has already been decided. Radical wing -Socialist-revolutionarylyutsionery and Social Democrats - notwent to compromise with  wellderzhavstvom. With this split tsarism laterused without doing most of its promises.

Manifesto was not able to remove allacute tension в societyand the liberal opposition was not able to hold back a wave of violence and lead the revolutionaryrise of mass spring, it continued to grow.

The spirit of freedom and infiltrated the barracks.In autumn 1905 it was 195 massrevolutionary actions of soldiers and sailors, some of which grew into a revolt, especially in Kronstadt (26-27October) та Sevastopol(11-16 November).

The culmination of the revolution was armedinsurrection in Moscow, which began December 7, 1905 its founders were Bolsheviks. On the suppression of speech was thrownregular militaryone military parts. ForDecember 15-18, troops under the commandsing forces defeated General Dubasovarebels. In Moscow, the insurrection broke out in Yekaterinoslav KharkivDonbas, Novorossiysk. But there they were suppressed. 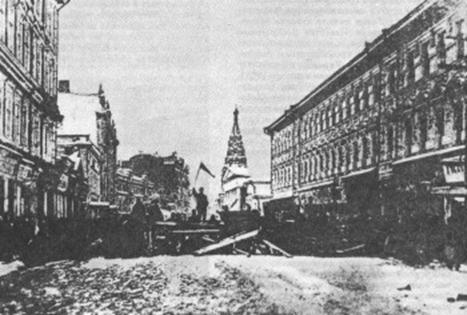 Barricades in the streets of Moscow

After the defeat of the December armed uprising of the revolutionaryVal started to subside, and the king's government moved to the offensive, taking the direction ofPolitical reaction: restricted freedom of speech, heldmass arrests. Only in December was arrested more than

2 thousand people, andspring of 1906 the number of prisoners and exiled to remote regions of the empirewas 50 thousand.

The new electoral law tovote got 25 million citizens. Elections remained multistage, and the rightVoter - limited. The powers of the Duma were kutsymy. Intensifiedstruggle against the national movement and its representatives.

It had the legal rightinitiative. and budget approval. Painsixin the Duma party members belonged to the constitutional democrats - Cadets (Liberal Party). Mandated Russianparties have chosen significant number of Ukrainian people. In the Duma they soughtfirst of all, greater autonomy for Ukraine. Ukraine deputation consisted of 63Ukrainian, 22 Russians, Poles, five, four Jewish and one German. Onsecond week of existence between her thoughts and the government prevailing tensions, because I demanded the resignation of the government, andhe just boycotted it. When the Duma adopted a draft law

3 Agricultural issuesgovernment announced that it is not within its competence, and July 9, 1906 Kingit dissolved. Soon the new government was formed headed by Mr. Stolypin. 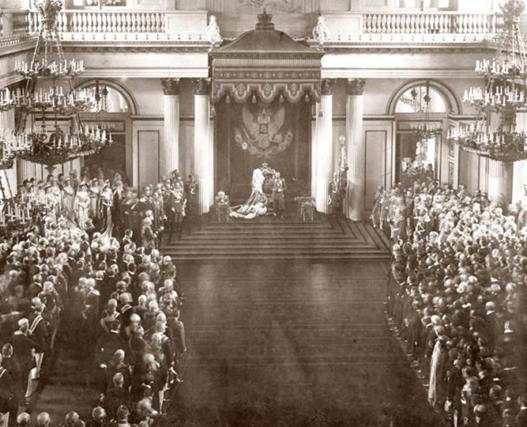 The opening ceremony and the State Duma April 27, 1906

2 nd StateDuma (February 20 - June 3, 1907) was more radical than the first. Its membership includes 100 deputies-socialists.It occurred acute discussion of two issues: the implementation of agricultural andmeasures against the revolutionaries. "Disobedient" Duma was againdecided to disband. The formal grounds for this case was fabricatedagainst 55 deputies - the Social Democrats. charged with preparing their statecoup. In June 1907 members - the Social Democrats was arrested and declaredmanifesto to dissolve the Duma, as well as changes in the electoral law.

At the time, took the mount royal government.

The reasons for the defeat of the revolution lay in the lack of unitylack of democratic organizationopposition forces. Not. was actively supported the revolutionary forces of the Army.Meanwhile tsarism received from abroad, weapons and financial support to defeatRevolution showed the need to unite all opposition forces to furtheranti-tsarist. For the ruling circles of the need for z'yasuvalasyabroad program of economicnomic and politicalreforms, to take effective measures against of the revolutionary forces and expansionsocial base of the ruling regime.

The first democratic revolution inRussia 1905-1907 pp. not brought out the central contradiction of the country. Revolutionended with the defeat of the opposition, but it prompted the government to conduct a series of reforms promoted activation socio-politicallife in Russia and the deployment of national liberation movements of peoples of the RussianEmpire.

7. The political reaction in Russia

Since June 1907 the Russian TsarNikolai її issued a mandatelaw that lifted undermine political conquest Revolution According to this lawlandlords had almost half the amount voterswhile the peasants - about a quarter. Most limited voting rightsworkers. Only in some industrialized developingnenyh provinces were createdcuria workers who obtain the right to have one in the Duma deputy.

After the electiontill 3 majority of the State Duma deputy possessed for landlords and industrialists. Elections did not provide absolutemajority of any political party. This enabled the tsarist government maneuverconflicting interests between landowners and commercial and industrial circles,Octobrists and Cadets. It was a typical bonapartystska policy authorities,forced balance betweenpolitical forces. No Ukrainian party does not get to this and subsequent thoughts, and therefore Ukrainian question they ignored. Politicalregime in Russia period 1907-1917 pp. was named Tretochervnevoyi monarchy.

However tsarism widely appliedrepressive apparatus to suppress the revolutionary actions. On charges Political crimes 1907-1909 pp. been convicted of more than 25 thousand those of them to death - 5 thousand encouraged provocative activityBlack Hundred organizations - the Union of Russian people and the Union of Michael the Archangel. "In the fight againststrikers entrepreneurs used "blacklists". Likvidovuvalysya unionorganization. Organizers peasant speeches without trial scorewhips or sent into exile to remoteprovinces. It eliminated the autonomy of higher educationalthese institutions. Many students in the revolutionaryactivity vyhanyaly of schools, gave the soldiers.

Tsarismunderstood that only the most repressive revolution impossible to prevent. It wascreate a social resistance monarhistskomu regime, which he lost duringrevolution. To realize this task, the head of government invited Mr. Stolypinaboutmaintain agrarian reform. Governmentabandoned policies on conservation of contemporary agrarian relations, and resorted to destruction"Community." Stolypin believed absurd artificial checksing objective of the extension of commodity-money relations in agriculture, a series of legislativehe acts allowpoured to lock inprivate ownership of land "communal" lands, that wereused by farmers. Receipt of allotment land in masnist, a farmer was ablecombine their plots into one, called the cuts, staying at the old placeresidence or pereselyavsya the farm built on their own land. 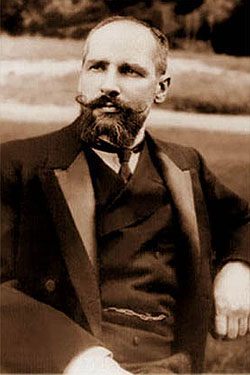 In the course ofreform intensified activity was created in 80 pp. XIX Art. Rural bank. He skupovuported on high priced land in the big landowners,podribnyuvav it on site and sold on payments to farmers.Landlords willingly sold the land. In Ukraine1906 to 1910 through Bank sold 480 thousand acres of land.

Another component of the reform was to free the land resettlement in Siberia. YesUral pereselylosya by almost 3 million people. However, 500 thousand of them latercame back.

Stolypin correctly calculated the socio-economic and politicalconsequences of reform. However, it narazylasya the resistance on the part of law that were notinterested in the destruction of traditional agriculture system, and fromSocialists who, relying on futureRevolution did not want to decrease the mode of socialformalities in the country. Villagers, fearful of losing the only source of existencetion,also resisted reform. Tsar Nicholas II, not realizing that Stolypinsaved his throne, and Russia from a terrible future, sent"Inconvenient" prime minister behinders. After the murder of P. Stolypin in Kiev reform went down to nothing.

Thus, the potential reform was notfully solved, and its objective is reached. It has achieved success where there washigh the intensity level of commodityAgriculture - on UkraineNoBaltic, the Volga region. From the "community" at the farm and went 26% cutsfarms, which gave half the commercial bread. With "community" has been deleted22% of the land. Thanks to reform Russia increased its exports of bread: in 1913 hetotaled 647.6 million pounds.

2.  ... Attract ... to participate in the Duma and to the extent possible? those classes of the population,which is now completely deprived of electoral rights ...

3.  Set as unbreakable rules, no laws to come into force withoutapproval of the State Duma and to selected people from the opportunity was providedgenuine participation in the supervision of principled actions put us on the authorities.

We call on all faithful sons of Russiaduty to remember your unparalleled strife among and with us all the strength strainto restore peace and peace in their native land. "

2. How did the Manifesto on the course of the revolution?

2. What events marked the beginning first democratic revolution in Russia?

3. What was the purpose of the revolution in Russia?

4.     Describe the basicperiods of deployment of revolution in Russia.

6. Spread the wordcourse of the revolution.

8.       What are the main featuresTretochervnevoyi monarchy.

10. What was the purpose and consequences of Stolypin reforms? C. Withadditional sources tell us the fate of reforms and their lead in the history of Russiabeginning XX cm.