1.Background and start the revolution in Mexico

Country's political crisis escalated in connection withholding President Diaz in 1910 another "campaign. Inpast, such "elections" Diaz brought the "unanimous"vote. This time the opposition had his own alternative candidate. ChairmanOpposition was FranCiskei Ignacio Madera (1873-1913)Son wealthy landowner andcapitalist who owned metallurgical, textile and otherenterprises. Madera studied in the U.S. and France. He published newspaper Democrat and head of the National- Liberal party. The posted1908 Madera book laid out the detailed program of democratic reform:ensuring democratic rights and freedoms, constitutional norms ofcountry to promote development of nationalIndustry and agriculture reform the army, fighting againstmonopolies, and friendship with Latin American countries and others.

On the eve of elections dictator Diaz arrested and Madeiragave it to court for allegedly organizing the insurrection. Released on bail,Madera fled to the United States. Of course, Diaz won the election.

The opposition began to prepare for othernow armed, forms of struggle for power. Madera has published a documentwhich presidential elections on 26 June, not been declaredvalid, and called for armed insurrection in 1920November 1910 In response to this call in different parts of the countrybegan massive performances. These events marked the beginning of Mexican Revolution.

Decisiverole in the revolt against D movement, which embraced the entire country. In southern Mexico operated steamtyzanska army Emiliano Zapata (1883-1919). He was born in peasant family.Annoyed by the fact that farmers in his village landowners selected public landZapata led the uprising. When Madera started against D Pancho(Francisco) Villa (1878-1923), who also supported the Madeira and alsoreceived the rank of general. Due to the peasant movement, performing urban- kyh workers, middle strata of society,Madera June 7 1911 he entered the Mexico City. 83-year old dictator had fled Diazthe country. October 2, 1911 Madeira was elected president of Mexico. 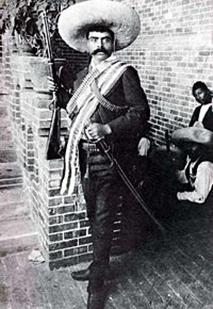 To power dostupylasya liberalopposition. But Madera abandoned its promise to return the farmers communityland. He demanded the disarmament of peasantarmies. Zapata and Villa defending the interests of villagers have refused to disarmhis troops. Between them and government troops opened hostilities. The only revolutionaryFront split. This advantage of clerical and latyfundysty.

2. The dictatorship of General Worth

Initiators of rebellion against the governmentMadera by the military. In addition, an attempt to weaken the influence of its leaderforeign capital raised objections from the U.S. and the threat intervention. Betrayal of the capital garrison officersallowed plotsfirm became under the command of General Worth to stage a coup.February 18, 1913 Madera and several membershis government arrestedshafts. A few days later President and MadeiraVice President Mr. Suarez was killed, the National Congress dissolved, manyMPs imprisoned. Worth became president.

Establishment of dictatorshiptriggered massive resistance in the country. Zapata Peasant Army and William together.Again original song sounded soldiers wil"Cucaracha", which later became world famous. In the fightagainst the dictatorship were all strata of society. A key role in bringing downWorth played a peasant dictatorship Guerillas. They were transformedLiberation Army in the south under the leadership of Zapata and the North Division lead byWilliam. The rebels surrounded the capital. In July 1914 Worth denied power.

In December, having joined at the head of his troops to the capital,first met Zapata і William.But they refused to form a revolutionary government. When William proposedthe presidency, he said, "I am not so educated, to bepresident. Filth will be Mexico, where it will be headed by illiterateman. "Then the president was appointed by moderate viewsGutierrez, who actually sabotaged reform meantime established itself in Veracruzas chairman of Venustiano Carranza public authorities that one of the firstled the fight against Worth. It was a big landowner, Minister in the governmentPresident of Madeira. He sought the Worth and opposed the U.S.interference in the affairs of the country.

Confrontation between two"Presidents," Gutierrez Carranza and ended up fleeing from GutierrezMexico City.

Carranza faced with the sameproblem as its predecessors - the agrarian reform. Villa and Zapatafailed to develop a joint program of action and continue the fight againstlatyfundystiv in their states. Carranza delayed from the agrarian reform,Wishing to finally crush the peasant movement. Only January 6, 1915 he issuedfirst law on agrarian reform, which provided for the return of villagerspublic lands, pastures and rivers. He also published a number of laws on reform.This brought him new fans. However, he continued to struggleagainst peasant rebel movement. In early 1916 the movement was completelysuppressed. Villa and Zapata killed by hired killers.

Carranza Government adopted a series of laws that restrict the activitiesforeign capital, especially after the military intervention of U.S. efforts. March 41916 12000th unit of General Pershing invaded Mexican territory,but anti-American sentiment in Mexico forced the U.S. to withdraw its troops.

After defeating the main forcesinsurgents in December 1916 was convenedThe Constituent Assembly, which is January 31, 1917 adopted a new constitution, by the time the most democratic in the world.The adoption constitution ended longMexican Revolution. Macksykaproclaimed a republic. The head of state was president, selectable for 4 years.He formed a government. Parliament (ThetionalCongress) consisted of the Chamber of Deputies and the Senate. Before Senate elected to 2 deputies from each state for 4years.

ChamberDeputies elected for 2 years. Charter work that was part of the constitution, calling such principles and rights:

•   recognizing the right of unions;

•   of strikes and collective bargaining agreements between unions andentrepreneurs;

•   establishment of arbitration to resolve conflicts in the industry.

Under the Constitution, education was passedstate. Viddilyalasya church and state, church natsionalizovuvalasyaproperty. Activity was limited to denominational church functions. 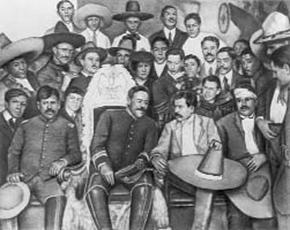 Upon approval of the constitution in 1917

The Constitution laid for pidmurokestablishment in Mexico of a stable democratic system that exists today.

Mexican Revolution was the firstXX century, democraticrevolution, which ended victoriously. But it does not finished. because not completely destroyed the feudal remnants.

"All land, forests and water .. go into possessionthose villages or citizens who have the relevant documents on the property, butwere deprived of their liberty because of the evil oppressors

By all means they shouldprotect possession, а usurpersubject to the court of special tribunals, which will be created after the victoryrevolution.

In thosedirectly or indirectly prove the resistance will be confiscated all ownership, 2 / 3 whichgo to war indemnity costs retired widows and orphans of victims of the struggle for this"Plan".

"I solemnly declare that I haveany ambitious intentions anddomahayusya only triumph our principles, namely: the creation democratic and fair government - exponent of the popular will which will make the reforms needed to establishnew regimem basedon equality, truth and justice for all regime that frees disadvantaged classes of poverty,humiliation and persecutionAnd finally, a strong government able to apmay remove any threat to the sovereignty and unitythe country. "

"Cm. 27Ownership of land and water within the national territory of origin is the law of a nation that had andhas right to transfer ownershipindividuals.

OnlyMexican-born and Mexican Association anment have the right to acquire ownership of land, water andaccesses to them orreceive a license to operate the subsoil, mineral waters andgeneral of fuel in the Republic of Mexico. "

What are the professed ideals of the peasantleaders as they were rebeen addressedin the Mexican constitution of 1917. ?

2.       Describestages of the Mexican Revolution.

3.       Whatposition occupied by the U.S. during the revolution?