§ 31. The new balance of power in the world and contradictions between the great powers (textbook)

§ 31. The new balance of power in the world and major contradictionsbetween the great powers

1. The ratio of forces in Europe

Russia's defeat in the Crimean War1853-1856 pp., association Germany and Italy defeated France in the Franco-Prussian War 1870-1871 pp. led to changes in the balance of power on EBpean continent and to increased internationalrelations.

While Germany's foreign policy course definedOtto Von Bismarck, who sought to establish complete hegemony of his country in Europe.Despite the defeat, France remained the main obstacle,and to ensure victory in the next war, it was necessary to enlistsupport of other countries to isolate France.

Growth of power in Germany prompted Austria -Hungary to move closer to her, though Austria was defeated in the war against Prussia1866 to the step of Austria-Hungary led the circumstances. In particular,proximity ethnic Germans and Austrians, unstable situation twofoldmonarchy, the desire to enlist the support of German diplomacy in the expansion ofBalkans, growing economic dependence on Germany.

Meanwhile, Bismarck sought to enlistneutrality of Russia, that in the 60's pp. endeavored to cancel the articles of the Paris Treaty in 1856 opened good prospects forRusso-German rapprochement.

In 1873 Bismarck made effortspositive results. Between Germany, Austria-Hungary and Russia concludedUnion of three emperors. But this diplomatic victory Bismarck youappeared illusive. In 1875-1877 pp. Russia did not support Germanyrank during the Franco-German war "worries" that is, in factacted as a guarantor of security and independence of France. It is leftunnoticed in Paris, which later led to the Franco-Russian rapprochement.

Meanwhile, anti-Russian stanceUK Germany gave hope to keep Russia in the neutral condition.England was the main opponent of the expansion of Russian possessions in the Middle andFar East and the spread of Russian influence in the Balkans. 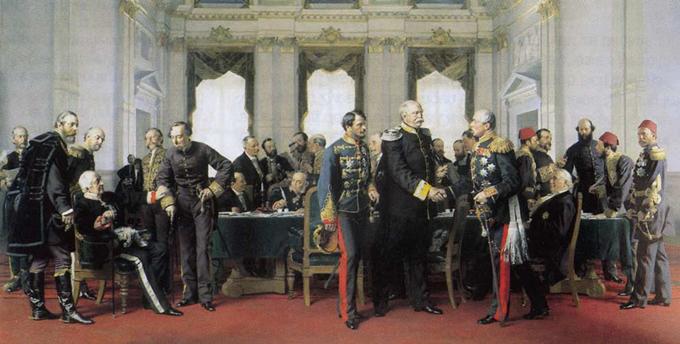 Thus, due to strong opposition of England andGermany, Russia could not fully use the consequences of victory inRusso-Turkish War of 1877-1878 pp.

In the early 80's pp. international relations in recent radical changes.Began forming political-military alliance, not againstreal and hypothetical (albeit defined) enemy, which were intended noteasy victory over any particular better and gain world domination.

The first step in this direction madeGermany. October 7, 1879 in Vienna, signed the Austro-German alliance.Simultaneously, Bismarck did not abandon hope of keeping Russia at neutralstate. In 1881, it was restored to the Union of Three Emperors, and concluded in 1887Russian-German "reinsurance contract. 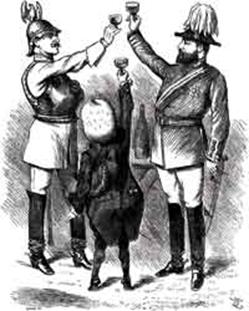 A cartoon on the Triple Alliance

But this is notexclude Russia from the main group rivals Germany. That same year, Germanyrefused to grant loans to Russia. In 1882 Germany, Austria-Hungary andItaly made a Triple Alliance for 5 years, that every 5 yearsponovlyuvavsya and existed until 1915

Butremained a great power - Britain, the position which depended advantage of any of the blocks.

End XIX Art. England are still pursuing a policy of "blyskuchoyi isolation (an indirect intervention in the affairs of European countries). The only concern for England was expanding andkeeping its termsnialnyh possessions. Maintained a strained relationship withFrance through the distribution of colonies in Africa andAsia. In 1902 he was awarded Anglo-Japanese alliance againstRussia, which gave Japan the opportunity in 1904-1905 pp. defeat it in war. 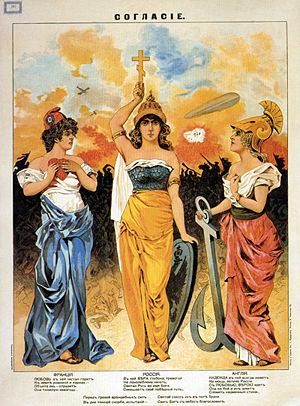 However, in British political circles increased understandingthat the main danger for the UK comes from Germany, which was toway to prepare for war to redraw the world (started building powerfulOcean Fleet). So the Anglo-German rivalry in economic and militaryareas led to the view of foreign policy of England.

April 8, 1904 in London, was signedAnglo-French secret deal. It rozmezhovuvalysya spheres of influence between the twocountries in Africa. England recognized the right of France to Morocco and France -the right of England to Egypt. This agreement was called the "cordial consent" -Entente.

After the defeat in the Russo-JapaneseWar and the events of the Revolution 1905-1907 pp. That weakened Russia, England are not perceived it asdangerous competitor.

Moreover, she now hadreason to treat Russia as its ally in the fight against Germany andthe national Rescuethese movements of peoples of Asia.Initiated the rapprochement between the two state institutionsyou became the Minister of ForeignEngland Affairs E. Gray (Liberal) and Russian Foreign Minister A.Izvolskyy. This led to the conclusion of August 31, 1907 Anglo-Russian Conventiondivision of spheres of influence in Iran, Afghanistan and Tibet. It was completedcreation of the Entente.

However, a general agreement among the threeStates did not exist. it concluded only at the beginning of World War II.

Thus, the result of internationalrelations at the turn century was the division of Europeand the world into two hostile military-politicalthese blocks - the Triple Alliance and the Entente. The main substance of policy great powers within these alliances waspreparation for the World War Division has divided the world. The first suchWar launcheded end XIXArt.: Spanish-American (1898 p.) Anglo - Boer (1899-1902 pp.), The Russo-Japanese (1904-1905 pp.).

1. From Union agreement betweenGermany, Austria-Hungary andItaly, concluded in Vienna on May 20, 1882 p.*

Their Majesties the Emperor of Austria.:, German Emperor ..,,King of Italy, the burning desire to increase the guarantee of universal peace, to strengthenmonarchical principle and ensure the preservation of this immunity in publicand political order in their states, agreed to sign a contract which, due toits essential nature of the protection and defense, is only intended to provide themfrom threats that could be created for their safety and peace of Europe.

Cm. 1. The High Contracting Parties promise to each other, peace and friendship, and they do not takein which no union or liability against one of their states.

They undertake to proceed to exchange views on politicaland economic issues of common nature that might arise, and they alsothat promise one another mutual support within their own interests.

Cm. 2. In case Italy, without a direct call from her party would have beenFrench attack on any occasion, both Parties must submitattacked party and assistance with all their forces.

The same obligation rests in Italycase of direct attack unprovoked France to Germany.

Cm. 3. If one or two of the High Contracting Parties, without direct on their partcall, were attacked and would involve in a war against two or morelarge states that do not participate in that treaty, the casus foederis(The case, which requires practicalapplication of the Federal contract.) Simultaneouslyhappens to all the High Contracting Parties.

Cm. 4. Where is any great power that does not participate in thisagreement, would threaten the security area one of the High Contracting Parties and the party which threaten, wasthis would have to declare it a war, both to undertake to respect otherstheir ally benevolent neutrality. Each in this case, reservesopportunity to go to war at the right time for you to participate in jointcase with its ally.

They now also undertake allcases of joint participation in the war did not conclude a truce, peace treaty orotherwise, as a common agreement among themselves.

Cm, 6. The High Contracting Parties promise to each other to keep secret the contents andThe existence of this contract ...

What were the conditions of the union contract? Is he"Protective and defensive nature", as stated in the document?

"Military convention between Russia and Franceproduced in St. Petersburg General and General Obruchovym Buadefrom in August 1892binding convention was acquired in late 1893 and at the very beginning1894 letter after Russian Foreign Minister Baron HirsaFrench Ambassador in St. Petersburg graph Montebello and Montebello written response,in which he confirmed Hirsu that France recognizes the obligation referred to henceforthmilitary convention for themselves.

Lighting the same desire topeace, France and Russia, with the sole objective to prepare for the demands of defensewar caused by military attack Triple Alliance against one of them agreedthe following provisions:

1.        If France is attacked withfrom Germany or Italy, supported by Germany, Russia will use all forces,which it may have to attack Germany.

If Russiaattacked Germany or Austria, pidtrymation, Germany, France will use all the forces that may have to attackGermany. (The original French draft: If France and Russia would sufferAttack of the Triple Alliance or Germany itself ...".)

2.         If the mobilization of troopsTriple Alliance or one of the states belonging to it, France and Russiaimmediately after receiving news of it, without waiting for any prior consent,immediately and simultaneously mobilize all their forces and they must go as close to theirboundaries.

(The original French draft:"If the mobilization of forces or of the Triple Alliance of Germany ...".)

3.    Active Army, which shouldbe used against Germany in France will be equal to 1300 000soldiers from Russia - from 700 000 to 800 000 troops. These troopsfully and with all speed put in the workso Germany had to fight at once and in the east and west.

4.    The General Staff of bothcountries will always wear oneone to prepare and facilitate the predicttions above measures.

They will inform each otherin peacetime, all data on the Triple Alliance army that they know whether theyknown. Means and methods of intercourse duringWar will be studied and provided advance.

5.    Neither France nor Russiaconclude a separate peace.

6.    This convention willforce during the same period as the Triple Alliance.

7.    All of the above itemsstored in the strictest secrecy.

1. To whom directed military convention?

2.    What is more yourecalls - general or specific plan of action? Explain why.

"Bismarck has long been recognizedThat ... in Europe there are two major irreconcilable directed against each otherstrength, two great nations, who would like to turn the world on itsownership and trading rule with him tribute - England ... and Germany ...German and English bagman bagman ... viedcompete in every corner of the globe. Million bickering createsdrive to the biggest war that anywhensaw the world. If Germany would have been erased from the face of tomorrow earth,there was no tomorrow the world would any Englishman who would not by thisRicher,

What was the defining conflict у Internationalrelations in early XX cm. ?

L What resulted in the appearancemilitary-political blocs?

2.    Describe the firstWar division of the world.

4.    How and why establishedTriple Alliance?

5.    What are the main contradictionwere between the Entente and the Triple Alliance?

6.         What foreign policycourse conducted by Germany during the reign of O. Bismarck?

8.    When and how was solvedAnglo-Russian conflict?

10. What was the purpose of creating of the Three Emperors?