On the continent of Africa is 58 countries and territories. In the past, almost all of them were colonies of European countries. In 50-70-x years. Twentieth century. most countries of the continent had become independent, 80-90-x years. the independence of Zimbabwe and Namibia have received. Remain dependent on. St. Helena (UK), Fr. Reunion (France), Ceuta and Melilla (Spain), Western Sahara (Morocco), on Mayotte (France). Most countries of the continent, becoming sovereign states, in fact, remained under the influence of their former colonial powers.

African continent has been and remains the least developed region of the world, it is called the mainland backward, agrarian and raw materials periphery of the world. All states of the continent, except South Africa are developing countries. For most of them characterized by economic and political instability, economic specialization, the low level of overall development, poverty and low life expectancy. 33 out of 47 least developed countries are in Africa. However, some countries of the continent through exports of raw materials have managed to achieve quite high rates of GNP. For example, in Libya, 90% of the proceeds of foreign trade gives the extraction and refining; to Algeria are the leading oil and natural gas, phosphates and metal ores. Egypt's main export commodities are cotton and oil. For the production of cotton country ranks first in Africa, and producing high-quality long staple cotton - the first place in the world. Special role in the economyIke Egypt has opened in 1869, the Suez Canal, which passes through one of the most important sea routes from the Mediterranean to the Indian Ocean are significant government revenue from tourism. In the island Mauritius and Seychelles, the main source of income is tourism.

In other countries of the region dominated by agriculture, which employs 60 to 80% of the working population. Nevertheless, because of low productivity and extensive nature of agriculture, only 2 / 3 provides the local needs for food. In some countries, developed plantations of export destinations with monocultural specialization. On exports of cocoa beans are allocated, Ghana, Ivory Coast and Nigeria, peanuts - Senegal, Niger and Gambia, palm oil - Nigeria, coffee - Ethiopia, Kenya, Uganda, vanilla - Madagascar, dates - Kenya, Tanzania.

Livestock in the region is extensive. Most advanced livestock breeding (buffalo, mules, zebu), breeding camels and sheep, whose production (except fur and leather) is used for internal needs of the population. Most of the animals used as draft animals.

Africa is conventionally divided into two subregions: North Africa and Tropical Africa (south of the Sahara to South Africa), or into five regions: Northern, Western, Eastern, Equatorial and South Africa.

Saharan Africa - the most backward part of a group of developing countries. This is the least urbanized region in the world. North Africa - more developed regions due to geographical location and availability of mineral resources.

South Africa - a country resettlement of capitalism - was formed in 1910, the State is rich in minerals. Except for oil, natural gas and bauxite, it has all the mineral resources that are exported to more than 80 countries. South Africa occupies a leading position in the world in reserves and production of gold, diamonds, magnesium, chrome and manganese ore, platinum group metals, asbestos, antimony, uranium ore. The share of manufacturing in GDP is 25%. In a country dominated by light industry, but it is significant and the proportion of metallurgy, engineering industry, chemical industry. Developed high-tech industry - military and production of nuclear reactors. Main area of the mining industry is of the Witwatersrand - the main area of production of gold and uranium. Here is the largest industrial center of the country - Johannesburg and the capital - Pretoria. In the same province, near Kimberley mined diamonds. Multinational diamond mining concern De Beers controls the diamond market in the world. 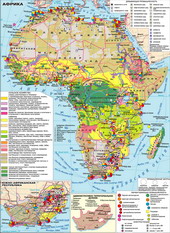 Countries in Africa, Australia and Oceania

On one of the railway stations of Angola

Settlement on the water in the Pacific

One of the radar stations, providing the European Mars mission, is in Australia