Antarctica lies in the zone Antarctic desert . A harsh climate devoid of most of the mainland flora and fauna. This is the coldest continent on the planet is very cold temperatures and little rainfall. It registered the lowest temperature of the planet (- 89,2 ° C, Vostok Station). Because of ice cover, which reflects most of the sunlight, and long polar night, when solar heat did not come to the surface in Antarctica formed the strongest climate on Earth. In the inner part of Antarctica formed a permanent high pressure region with frosty weather with rain. Hence the cold air flows down to the edge of the continent, forming drains winds .

climate of the coastal parts of the mainland due to a milder effect than warm maritime air masses. On the fringes of Antarctica is a place free of ice cover, which can be found in little vegetation: lichens, mosses and even some types of flowering plants.

through a rigorous climate of Antarctica has no permanent residents. Previously, there were building zymivky promyslovyky hunters, but now live on the continent mostly researchers, academics and representatives of scientific stations.

Given the extraordinary uniqueness of the continent international treaties on Antarctica in 1959 prohibited any territorial encroachment and guaranteed freedom of scientific research. Antarctica is actually a huge ground Earth. Among the two dozen stations polar continent and Ukrainian Vernadsky . Since 1996, there waves the national flag of Ukraine. 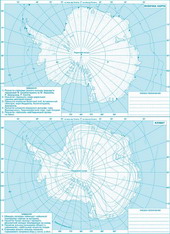 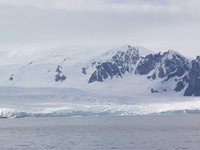 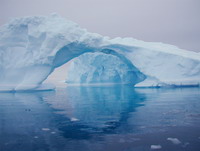 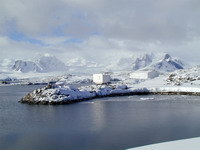 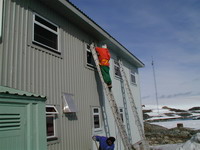 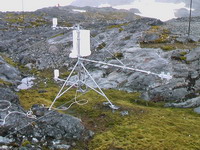 In Antarctica of continuous meteorological observations 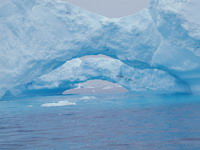 In the icy gallery

Modest flora of the mainland presented mainly mosses and lichens

During the short summer, only small coastal area free of ice

Over the short summer to raise offspring

Whales near the Antarctic coast 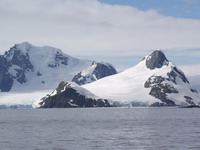