2. What special geographical situation of Africa affect its climate.

GENERAL FEATURES OF CLIMATE. Already know that the most important factor is klimatotvirnym the amount of solar heat, which receives the surface. InConsequently the location of Africa on both sides of the equator between the tropics (ie within hot thermal zone), it gets more than other continents solar heat. Therefore, the greater its average temperature of any month is higher than 20 0S. And it is near city of Tripoli was registered the highest on the globe temperature 57.8 0C. while in the mountains, located outside the hot zone on the outskirts of mainland winter frosts are more than -10 0C and snow falls. But cold, winters are customary for us in Africa is not. Winter and summer are different a mostly moisture conditions. Summer - almost everywhere in the rainy season, winter - Bezdoschovyy season. An exception is near the equator, where year-round precipitation, and the desert, where rainfall is neither summer nor winter.

An important factor is klimatotvirnym circulation of air masses. В  equatorial part of Africa dominated moist equatorial masses down a large amount of rainfall - up to 3 000 mm per year. In tropical latitudes, dominated by dry tropical air masses, rainfall is very low - to 300 mm per year. Above the constant winds blowing the mainland - and western trade winds that bring or dry continental air, sea or wet.

Significant impact on the climate makes laying surface (Relief, flow). Thus, high peak Mount Kenya and Kilimanjaro, Despite location near the equator, covered with perennial snow. Cold ocean currents that washed shores of Africa, do not contribute to the formation of precipitation. 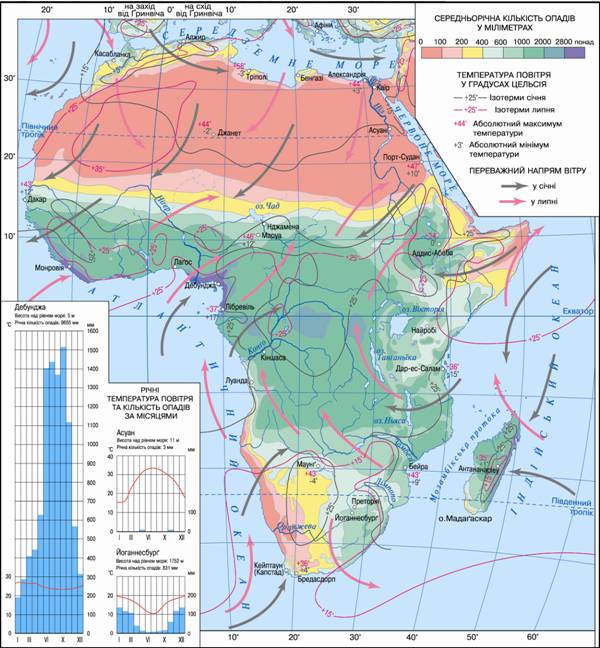 Climatic zones TYPES AND CLIMATE. Africa lies within equatorial, two subekvatorialnyh, two tropical and subtropical two climatic zones. Each of them possess their own type of climate.

Equatorial climatic zone extends to both sides of the equator on the coast Gulf of Guinea and the Congo Basin. There reigns hot and humid equatorial air mass. Because air temperature during the year high (26? 28 0C). Due to low pressure, which is set in equatorial latitudes of the earth's surface heated air rises up. There it cools and forms a powerful cumulus. They generate daily thunderstorm rainfall. Therefore, for the year rainfall is too much - 2 000 - 3 000 mm. Not only are people not accustomed to such conditions, but also local residents are very difficult to endure the stifling heat and high humidity. Relief brings only cool night. So equatorial always hot and always humid climate little Fit for life.

Naymokrishe place in Africa is on the western slope Cameroon volcano that on the coast of Gulf of Guinea, which recorded over 9600 mm of rain per year.

Tropical climate zone placed between subekvatorialnym and subtropical zones of both hemispheres. They dominated all year extremely hot and dry tropical continental air mass. Such climate promotes the formation of deserts.

Most hot and dry region located in North Africa. Northeast Passat there blowing from the vast array of land - Eurasia. Therefore, continental air, which he is extremely dry. This led to the formation of North Africa's largest Desert World - Sahara. The temperature in the shade there reaches 50 0S. The precipitation is only 1-3 mm per year. Sometimes that is 5-10 years single drop of rain falls. In South Africa due to the smaller length of mainland from west to east in the tropical latitudes rainfall something more. Southeast Passat, which blows from the Indian Ocean, although tropical is, but damp air over the ocean. So Kalahari moistened considerably more than the Sahara desert is not as semi. These factors formed large areas of Africa tropical desert climate.

In tropical latitudes in the south-west coast of Africa, by the Atlantic ocean, almost never rains. Cold currents that pass near, cooled Wet Marine air masses. Air becomes difficult and can not rise to the height required for the formation of rain clouds. Therefore, rainfall there tiny (100 mm). Source hydration is only fogs, which promotes the formation of large humidity. Therefore there desert NamibiaThat rises to the very coast of the ocean. Instead of east coast of Africa also dominates marine tropical air, but the climate there completely different - tropical humid. Communist formation of large rainfall (1 000 mm per year) contribute to the warm currents that flow along the eastern coast of the mainland.

Subtropical climate zones in Africa, covering only extreme areas in the north and south mainland. The climate in both hemispheres characterized by seasonal changes air masses. Summer in the subtropical latitude tropical air masses come from mainland, so summers are hot and dry. In winter, due to the displacement pressure zones, there with westerly winds coming moderately moist air masses from the ocean. Therefore, falling rain and even snow in the mountains. Subtropical climate with dry hot summers and damp winters Fit for life commercial activity. 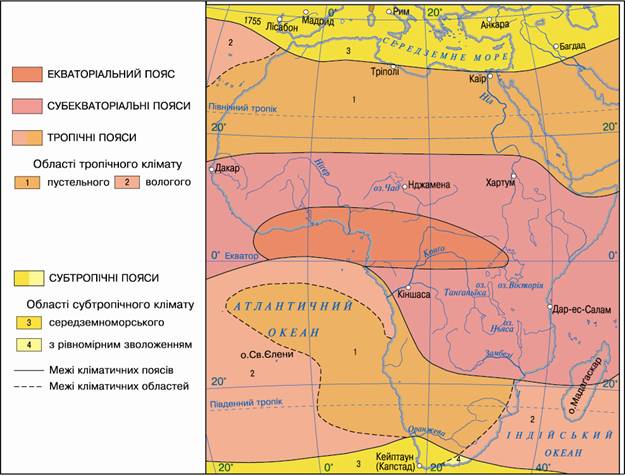 1.     For the isotherms in July and January average set monthly air temperatures near the equator, the tropics, in the far north and extreme south of the mainland.

2.     Determine the maximum high and maximum low air temperature was registered on the mainland.

3.     In areas where the largest falls, and in which - lowest rainfall?

5.     How to reach subekvatorialni belt?

7.     What part of Africa is located in subtropical zone?

2. In which zone is always summer?

3. Why in the tropical zones of widespread dry desert climate?

4. In zones where the seasons are dependent on the presence or no rain?

5. Consider that most parts of Africa have favorable for life and commercial activity climatic conditions?

6. Why in the major climatic zones for weather was not markedly changed? Why is it changing in the transition zone?